A colleague, upon reading several of my blogs, suggested I check out Island Beach State Park. Island Beach is currently one of the most popular state parks in New Jersey and attracts approximately one million visitors every year. With beautiful, pristine beaches, I was surprised when he suggested that winter is a great time to visit!

But as I've realized before, winter is a great time to appreciate the wonderful natural environment of a beach, without the hordes of sun worshipers.

Shaped by storm, wind, and tides, Island Beach State Park is a narrow barrier island stretching for 10 miles between the restless Atlantic Ocean and the historic Barnegat Bay. Despite being a relatively short drive from some of the the most densely populated areas on the East Coast, here you can glimpse the pristine land that native Americans and early European explorers found along the New Jersey coast so long ago.

Island Beach is one of New Jersey's last significant remnants of a barrier island ecosystem that once existed along much of the coast and is also one of the few remaining undeveloped barrier beaches on the north Atlantic coast. More than 3,000 acres and 10 miles of coastal dunes remain almost untouched since Henry Hudson first described New Jersey's coast from the ship, the Half Moon, in 1609. 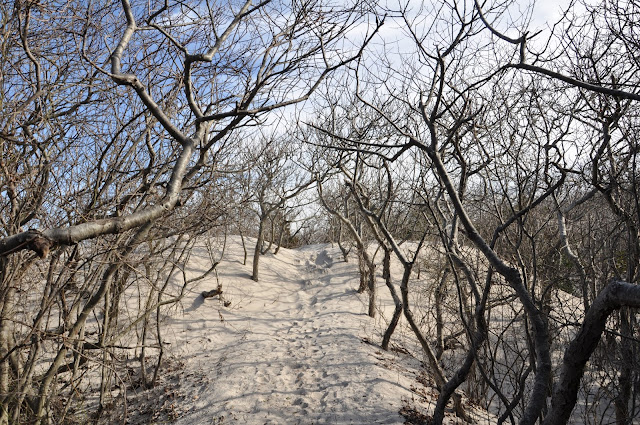 The park's natural areas encompass one of the few remaining undeveloped barrier beaches in the northeast United States. The park's website notes that rolling sand dunes, salt-sculptured vegetation, lush green salt marshes, and nine plant communities including a "nationally significant" maritime forest characterize Island Beach. The piping plover, a beach bird species that is on the Federal list of threatened species, is an occasional inhabitant of the open beaches and dunes.

But what really brought me there, in addition to the beautiful, wild, ocean/beach/dune scenery, were the foxes. My colleague promised me I'd see many foxes. In fact, the park is rather known for its red foxes. Although they are very common in the park, being able to see them can be purely a matter of luck and some patience.

Initially, I worried we'd driven 3 hours to see foxes for naught. We drove the entire 10-mile length and saw nary a bushy tale nor pointed nose. We explored the end of the drive, where we met and chatted with a local photography hobbiest who offered to share her lovely photos. We headed back, driving slowly, and checking out each of the parking lots.

We joked that the foxes were probably hidden along the side of the road, mocking us and our three dogs. We turned down a kayak/canoe launch access road and from the side of our eyes, glimpsed a fox serenely sitting in the road, licking its paws. We backed up and slowly approached the fox. It scampered back into the brush. We drove off again, but in the rear view mirror, saw that he came out again. So he was mocking us!

We parked as he loped over to the far end of the parking lot. It was too far away for me to get very good photos, but it was fun to watch the little fellow. And how beautiful he was! The dogs were blissfully unaware and were, therefore, silent, thank god (two of the three are beagles, bred to hunt fox). We enjoyed him until finally he got tired of watching us watch him, and he trotted away back into the brush to do his secret fox things.

And with even just the one sighting, we felt that the long trip had been justified. But still we checked out the other parking lots, and at one of the largest, we were rewarded again. A fox sat, watching us. We crept closer, and with our front windows down (the dogs were in the back), they caught whiff of the fox and began their howling, baying hysteria. The fox was having none of it, and loped off, disgusted at the scene they were making. And then we saw a big beautiful fox near the exit; he seemed to be smirking at the beagles and at us. 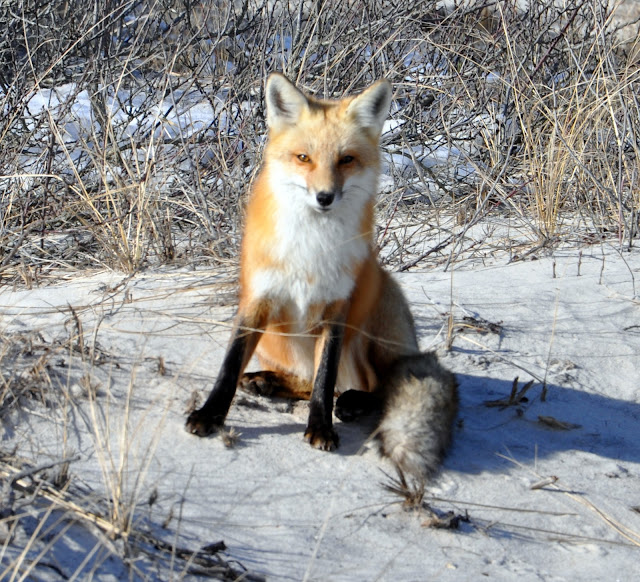 She loved the attention. She squinted into the sun, and showed us her right side, and then her left. She ran a few paces in front of the car, then turned around, as if to say, "Do you like this side? I think it's my best!" She curled her bushy tail around her black paws and posed like a supermodel. The beagles were going berserk in the car, giving us headaches, but that fazed her not at all.

The park population of foxes does not seem to be particularly afraid of people but they do tend to stay hidden most of the time -- hence the luck needed to see them. I'd like to note that we frequently see foxes in our suburban neighborhood in Ellicott City, MD -- but these are naturally more skittish and wary.

After enjoying the foxes, we decided to head to the other side of Barnegat Inlet to visit Barnegat Lighthouse, which we could dimly see from the bay side of the island. Although just a few minutes away as the crow flies, by car it's a full hour drive. 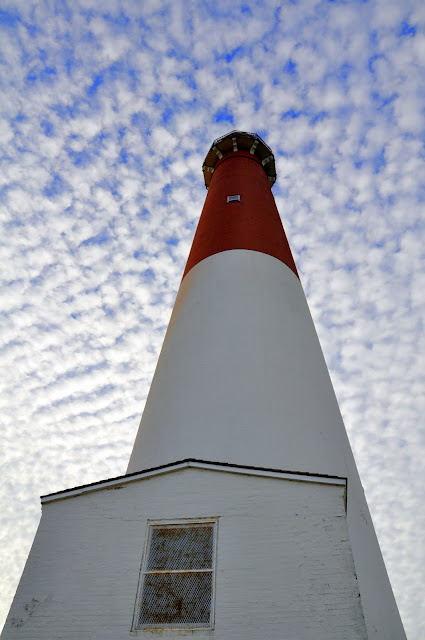 This lighthouse is significant because its location on the northern tip of Long Beach Island was regarded as one of the most crucial "change of course" points for coastal vessels. Ships bound to and from New York along the New Jersey coastline depended on Barnegat Lighthouse to avoid the shoals extending from the shoreline. As you drive in New Jersey, you'll notice that some of the NJ license plates depict this lighthouse. 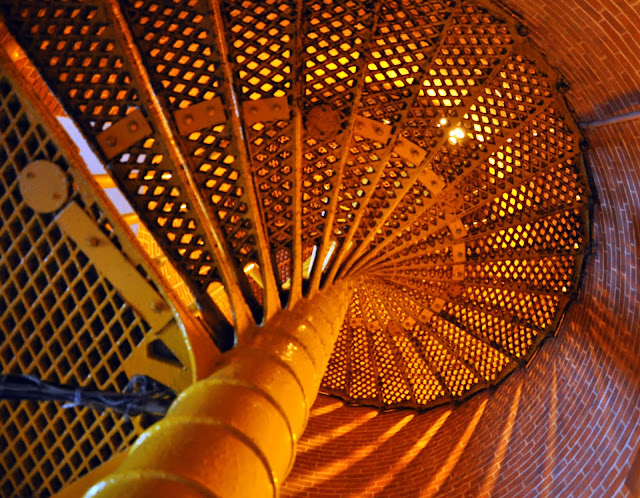 While we were visiting the lighthouse, we walked along the sea wall, watching the gulls and the waves moving through the inlet. We caught a brief glimpse of a harbor seal, but by the time I fumbled with the lens cap, he was gone beneath the surface again. Still, cool to see a harbor seal in the wild! We arrived at the lighthouse just as it was closing -- so I didn't get to climb to the top, unfortunately. The view from the top would be amazing, I imagine, and worth the climb up 217 steps!

Know before you go: Visit Island Beach in May and catch both the beach heather in bloom as well as migrating water fowl overhead!

Dogs: Why, of course. But foxes might be a little shy if you bring your pooch.