The Ghost Ships of Lake Superior

This week we depart the Mid-Atlantic states for a brief journey across Michigan, which brought us all the way up to Lake Superior to see shipwrecks underwater, back down to Mackinaw City and Mackinac Island -- a magical place -- and then down the coast of Lake Huron to visit a few lighthouses. This post explores some shipwrecks of Lake Superior.

There are some famous shipwrecks on the Great Lakes -- the one that comes to my mind first, of course, is the Edmund Fitzgerald. I remember singing that song when I was 13, begging my parents on a driving trip around the U.S. NOT to change the radio channel until it was over. the Great Lakes Shipwreck Museum estimates that there are 6,000 shipwrecks, 30,000 lives lost, although some estimate that there have been as many as 25,000 shipwrecks.

One of the things to do on the Great Lakes, of course, is to visit these shipwrecks. We chose a shipwreck tourout of Munesing, MI. It offered a 2-hour narrated excursion of several shipwrecks: the Bermuda (1860-1870) and the  Herman H. Hettler (1889-1926) on the bottom of the Lake Superior, with the Pictured Rocks National Lakeshore in the background. We also got to enjoy a close-up view of the historic East Channel Lighthouse and the colorful rock cliffs and caves of Grand Island, as well as a third, unnamed, mysterious shipwreck! 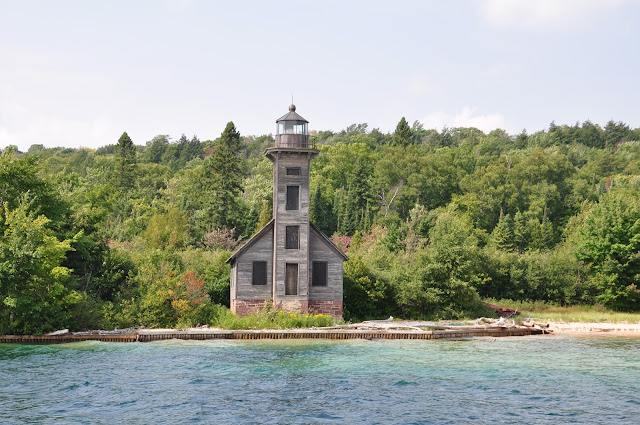 Preserved by Lake Superior’s frigid waters, these doomed wooden ships of the industrial ages lay on the bottom where they met their fates. I felt awed when the curved shape of the schooner's hull came into view -- it was a magical moment. I almost expected to see a sailor working on its deck, the water was so clear. Or a skull. Yes, I was definitely hoping for something fantastical!

Our tour headed toward Grand Island, an island of mostly pristine wilderness with just a few settlements on it. Most of the island remains as it was during when the Hudson Bay Company traded furs with a small band of Chippewa Native Americans who lived there. Depending on what source is providing the info, the name of the inhabitants varies. A local state park notes that the "Anishnabeg Tribe" lived there for "many generations. There is much I don't know about Native American heritage, so perhaps the Anishnabeg were a subgroup of the Chippewa? I note I will need to do some more research! The same state park source also noted that there are archeological remains of a small fishing camp from 4500 years ago, so the island has a long history of habitation. Abraham Williams was the first white settler, arriving in 1840. He operated a small trading post at the southern tip of the island for many years. 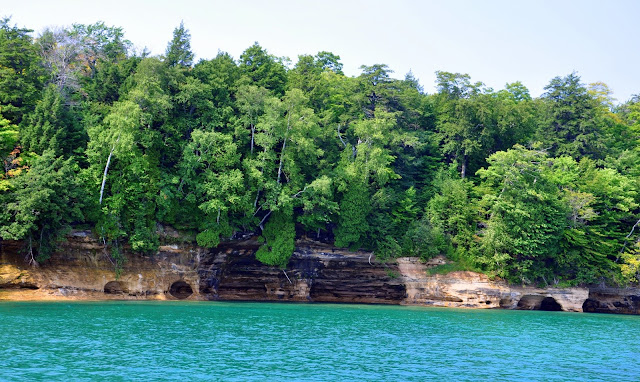 We curved into Murray Bay for our first stop. After all these years, the schooner wreck in Murray Bay remains an enigma. It has variously been identified as the W.W. Arnold, Granada, Dreadnaught, or Bermuda. It seems most likely that it is the Bermuda. 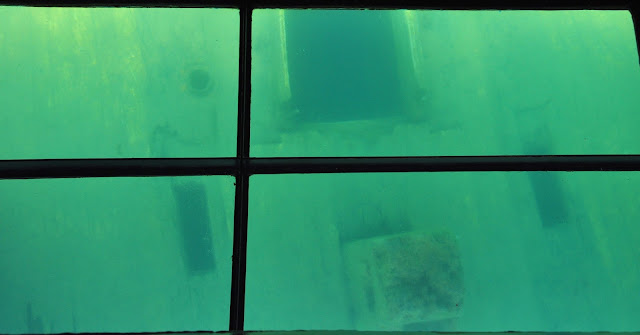 The two-masted Bermuda was a typical schooner, designed to trade through the confining dimensions of the old Welland Canal between Lakes Ontario and Erie. Launched at Oswego, NY in April 1860, she was 136 feet long, 26 feet wide and 11 feet, 9 inches deep. Her early years were spent carrying grain between Lakes Michigan and Ontario. When the demand for iron ore increased, she shifted to carrying ore down from Marquette, MI. 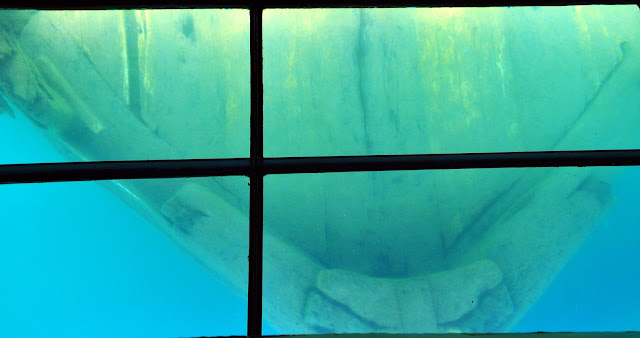 Her top deck is just 12 feet below the water’s surface where she has remained for 128 years. The wreck is intact -- remarkable condition. She seemed so peaceful down there in the cool waters, disturbed only by tourists like me aboard this sightseeing trip or by the more adventurous divers.

Next we floated above the Herman H. Hettler, which was built in 1890 in West Bay City by James Davidson and Company for Campbell and Cook of Michigan City, IN. In design she was very much a traditional steam barge or, as this style of vessel was called on the Great Lakes, a lumber hooker -- an interesting name! I had to look it up, and learned that "lumber hookers" are Great Lakes ships designed to carry her own deck load of lumber and to tow one or two barges -- usually large old schooners stripped of their masts and running gear to carry large cargoes of lumber. I wonder whether the Bermuda would have met this fate, had she not wrecked.

She was very strongly built, with heavy framing, steel arches in the sides, diagonal steel strapping and an especially robust bow for punching through ice. A 485 horsepower fore-and-aft compound steam engine provided the power. She measured 200 feet long, 35 feet wide, 13.3 feet in depth and 726.33 gross tons. 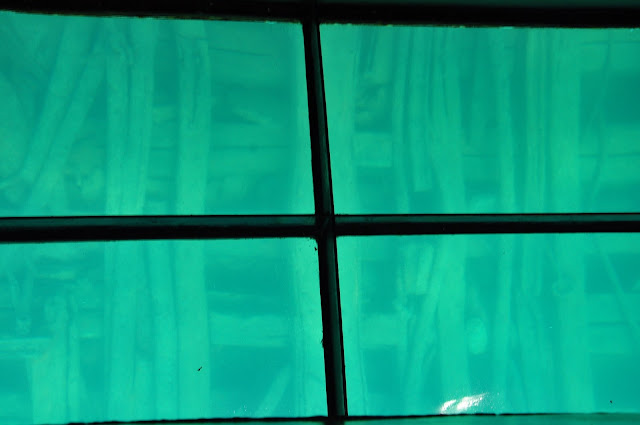 On November 23, 1926, the 36 year old wooden steamer Herman H Hettler was seeking shelter in Munising Harbor from a fall gale when a reported compass variation caused her to veer off course and slam into the rock reef off Trout Point, at the north end of the east channel. The Hettler, under Captain John M. Johnson, was en route from Ludington, MI, to Duluth with a cargo of 1,100 tons of bulk table salt. The accident happened about 8:30 p.m. while visibility was restricted by heavy snow squalls.


The force of the grounding was so severe that it ran the steamer on the rocks up to her third hatch and forced her bow three feet out of the water! The seas were slamming into the Hettler regularly, causing the steamer to “work” on the rocks, and slowly but steadily opening her seams. Blowing his whistle to attract attention, the captain kept his 16-man crew aboard and worked the pumps. The following day, when it was obvious the steamer wasn’t going anywhere, they launched their lifeboats, which were towed into nearby Munising by a fishing tug.

Finally, we went to see a wreck discovered by passengers on one of the glass bottom boat tours. During the ride, they spotted some previously undiscovered wooden wreckage close to shore along Grand Island’s “Thumb.” 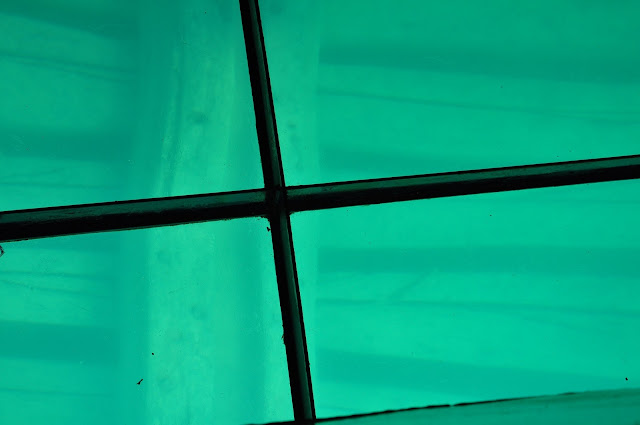 The wreckage consisted of a section of a schooner’s bottom about 150 feet long by 35 feet wide along with a part of a side 130 feet long and 15 feet deep. At first the wooden hull pieces were thought to be the remains of the schooner Alta, which went ashore somewhere near Trout Bay in 1905. Closer examination showed the wreckage to be that of a scow schooner rather than the conventionally constructed Alta. A scow schooner, the tour narrator explained, was a cheaply built vessel with a flat bottom, flat sides and a square bow and stern. Historical research has failed to produce any record of a scow schooner meeting its end anywhere near Grand Island. 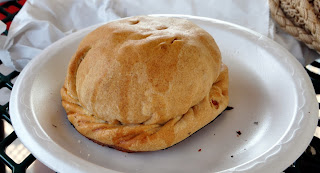 After the shipwreck tour, I recommend trying a regional specialty, a pastie, at Muldoon's, just around the block from the tour outfit. Pasties, basically meat pies filled with beef or chicken and potatoes and vegetables, were brought to upper Michigan by Cornish miners, and were popular with working people due to its unique shape, forming a complete meal that could be carried easily and eaten without cutlery. Pasties in the Upper Peninsula of Michigan have a particularly unusual history. Many ethnic groups adopted the pasty for use in the Copper Country copper mines; the Finns mistook it for the traditional piiraat and kuuko pastries. Thus, the pasty has become strongly associated with all cultures in this area. We tried one each of the beef, chicken and vegetable pasties. Chicken was our favorite! They are huge -- so getting three was too much for just two people. Our beagle enjoyed what was left. 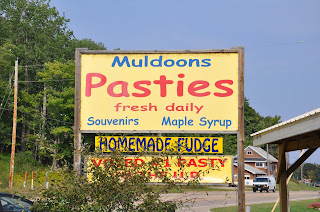 Dogs: Surprisingly, yes. Like most of Michigan, the tour company was dog-friendly, providing onsite kenneling (first come, first serve) in air-conditioned spaces for your best friend. 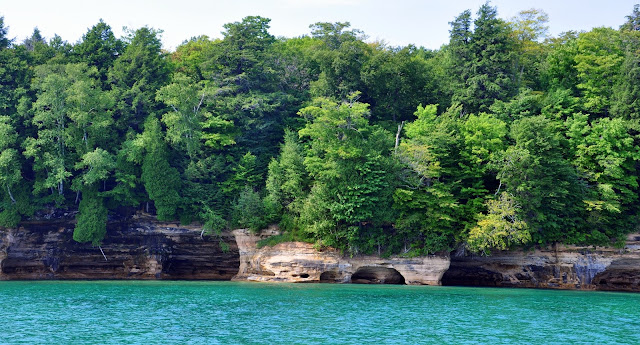