Today's post is a special event post, because the Light City Festival is happening RIGHT NOW! So pull this post up on your phone, download the Light City app, and get going down to Baltimore! 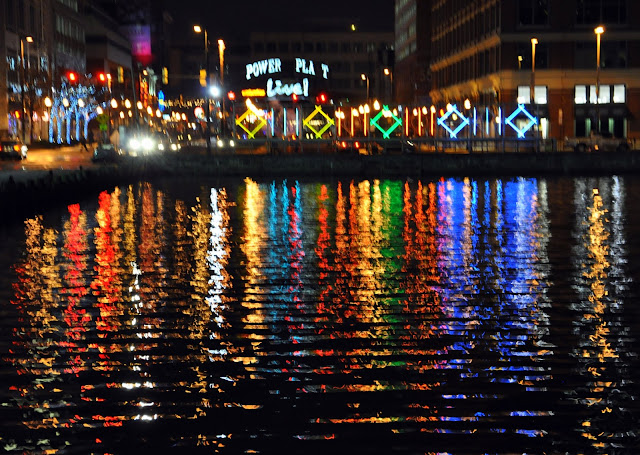 Yesterday I was lucky enough to be invited to a media preview of Baltimore's first ever light festival -- being a blogger has its benefits! But in fact, anyone could have walked through and by the lights -- it's a free festival in public spaces, intended to showcase Baltimore as an international city, highlighting its people, its music, its creativity, its innovation, and its BRILLIANCE, in colorful, sometimes thought-provoking artistic installations and exhibits.

In fact, the Light City Festival is touted as the first "large-scale, international light festival" in the United States, right here in Charm City -- ummm, I mean, Light City. (Please don't joke about City of Lights -- the Light City Festival organizers are grumpy about bad jokes like that.) The festival will celebrate ideas, ingenuity, and creativity through art, music, and innovation.

Premiering this week, Light City Baltimore is the first large-scale, international light festival in the United States, homegrown right here in Baltimore. Light City will provide a backdrop for the celebration of ideas, ingenuity and creativity through art, music and innovation. In addition to the light displays, there will be music and live performances as well. 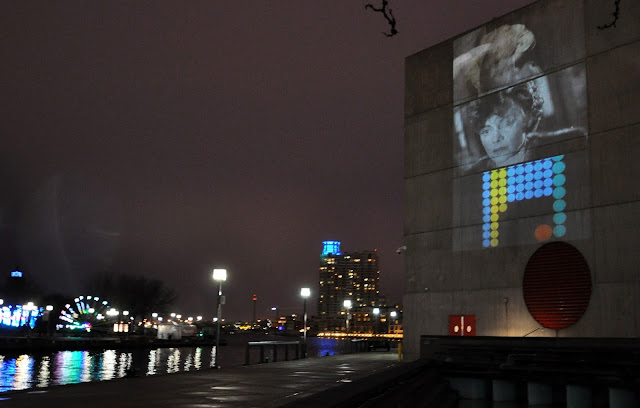 Light City’s innovation programming will generate an "ecosystem of ideas and learning" during the day – while lights, performances and live music "reimagine" the Inner Harbor at night. I don't know about that. But it is a feast of light sensation for your eyes. And it's enjoyable, whether you try to learn about the artists' messages or just appreciate the setting, the light, the color extravaganza, and the opportunity to enjoy downtown Baltimore at night.

"Dear Baltimore," an art installation by Thick Air Studios, which I was most looking forward to seeing, although I only glimpsed them from a distance, to my disappointment. This installation is a moving one -- so you're lucky if you catch it -- in that bicyclists carry luminous letters above their bicycles -- arriving at a particular location either en masse or from disparate directions -- and as they form a line, the letters compose a message. All the letters come from the phrase "Dear Baltimore." Advertised as a "dance on bicycles," the riders "flow" throughout various Light City locations and local streets. Keep an eye out for their messages! 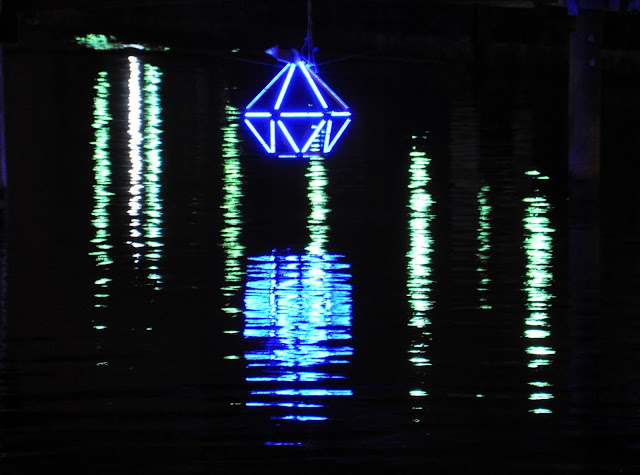 Diamonds are a girl's best friend, so of course, I was excited about the "Diamonds Light Baltimore" installation, presented by Legg Mason, and created by artist Cheon Kroiz. This art installation consists of 15 diamonds of various sizes and shapes, although each is large enough to walk around, beneath, and through. It creates a cool effect - the diamonds as a whole scatter down the Waterfront Promenade and reflect in the water, mirroring their luminosity. 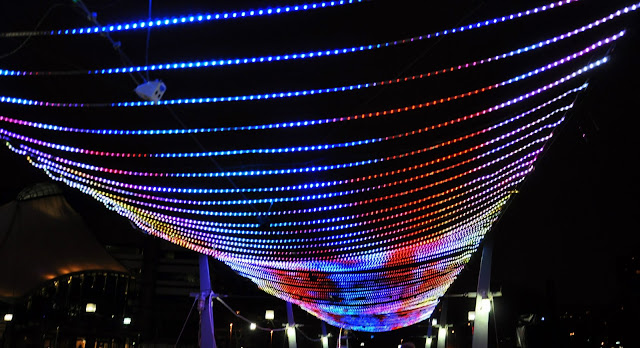 The lights were playful and colorful, often interactive, such as the bridge of lights (in the photo above) that would change color according to the passage of people below the light canopy, titled "Pixel Promenade Radiance," by artists Erin Barry Dutro and Kyle Steely. One, such as the light art depicted in the photograph below, tried to remind people about what we're losing -- touch with nature -- by our increasingly urbanized, denaturalized lives. This artist, Lisa Dillin, sought to recreate the play of shadow through trees. Others were just pure visual fun, such as "Peacock," by artists Tim Scofield and Kyle Miller, presented by the Greater Baltimore Committee, a 20-foot tall animatronic bird whose illuminated plumes open to about 40 feet across. Spectacular! 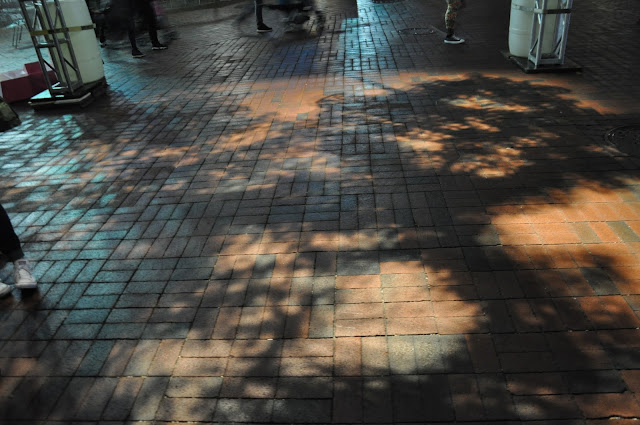 Getting there: It's all happening in and around Baltimore's Inner Harbor, along a mile and a half stretch of the Waterfront Promenade. 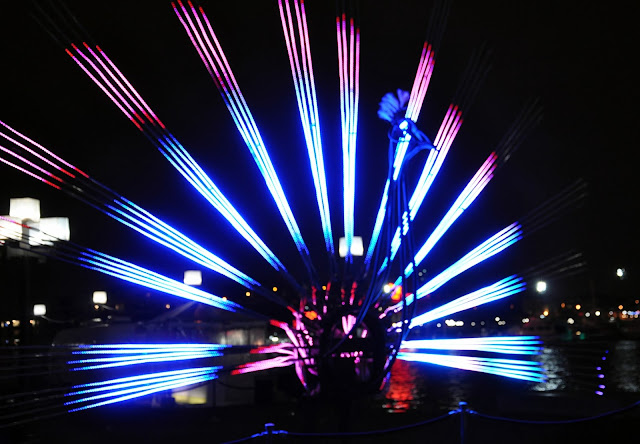 Website: For more info about the art installations and better photos, as well as information about other aspects of the Light City Festival, go to http://lightcity.org/art-and-performance/light-artists/