A Visit to Hell House in Howard County, MD

This morning my husband surprised me with an adventure I probably wouldn't have gone on alone.
﻿


Many mornings we grab our beagles and go walking along the Grist Mill Trail in Patapsco Valley State Park -- we usually access it from the swinging bridge adjacent Ilchester Road in Ellicott City. Parking isn't great there -- just a few spots along the road, and you have to be careful because despite the twisty, small lanes, vehicles travel through at high speeds. The morning was a chilly one, even by early April standards. Ours was just about the only car parked there. Other, wiser folks were sleeping in or going to the gym.

Instead of turning left to go over the bridge and walk along the Patapsco River, we instead turned right, and headed for mysterious stairs leading up to who knew what. I've always wondered where those stairs led to. 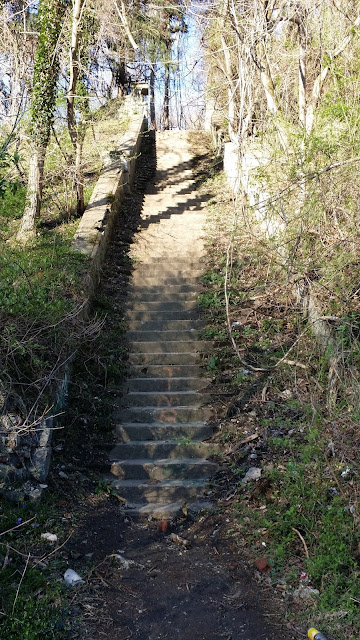 Recently, a blog reader had tipped me off to the site, just a couple miles from my home: the ruins of St Mary's Seminary. Judging from the graffiti and broken bottles, this place is a favorite of local kids (yeah, that and I recognized the location in a FB photo of my eldest son). Ghost stories and urban legends have spread throughout the area about the location and the nefarious religious practices that are supposed to have taken place there. Over time, locals began to refer to it as "Hell House," but I suspect that's because of the nuisance and hell-raising by the local kids.
﻿﻿﻿
The answer to my question is that these stairs lead to nowhere, making the ruins and the site all the more mysterious. Unfortunately, today there's not much to see, although the view through the trees is amazing. As the manmade structures deteriorate and disappear, nature slowly repossesses the land.

We were on the grounds of what had been called Mount Saint Clemens when it opened in 1868. In 1882 it was renamed Saint Mary's College. In 1893 the chapel was established as a parish church dedicated to "Our Lady of Perpetual Help," although the parish moved the church to a new facility in 1958. St Mary's served as a seminary from the 1880s until 1972, when it closed after struggling in its last years. 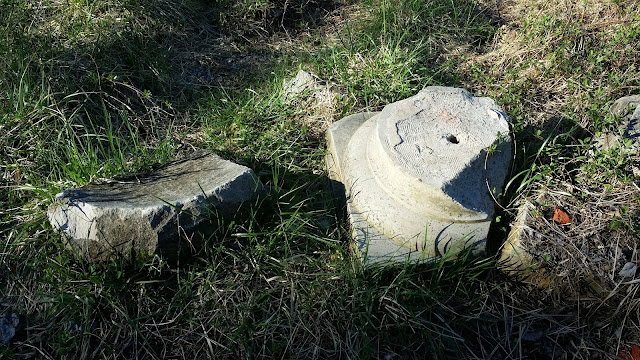 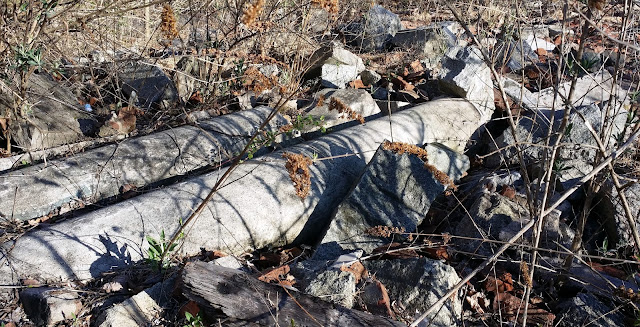 According to an AbandonedCountry.com article, St Mary's was once a five-story brick college building, replete with a portico and cupola. There also was a chapel here. Maryland State Historical Trust records noted that St. Mary’s College and Chapel were one of the most impressive architectural complexes in Howard County. And it's no wonder -- the site itself is impressive -- the top of a hill overlooking the Patapsco River and the now uninhabited town of Ilchester. 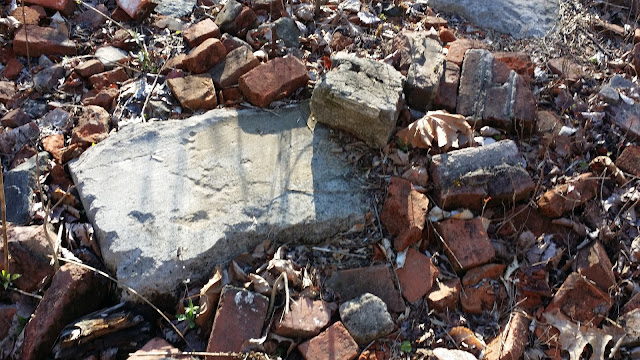 After closing in 1972, it was abandoned and became a place for urban explorers, teenagers looking for a scary place to party, vandals, and photographers and bloggers like me. In 1997, the many buildings of St Marys still standing were set ablaze by vandals. In 2006, the remaining ruins still standing were torn down.

Now what remains is a pile of rubble, pavement of the drive up to St Marys (off of Bonnie Branch Road), ruins of long sets of staircases going up to the old grounds, and up until circa 2013, a huge wrought iron cupola over an alter with a very large black cross. I hope that somewhere, this iron cupola is preserved!** Sometime over these years, the state of Maryland acquired it and added the acreage to the Patapsco Valley State Park.

It is: we went back the following year and found it here.

A cemetery just up the hill along Ilchester Road is called the St Mary's Cemetery. I always wondered where St Mary's was. Now I know. Ironically -- interesting factoid alert -- at a different local cemetery (Meadowridge Cemetery, adjacent U.S. 1 and Meadowridge Road), St Mary's bells still sway and toll in the breeze. 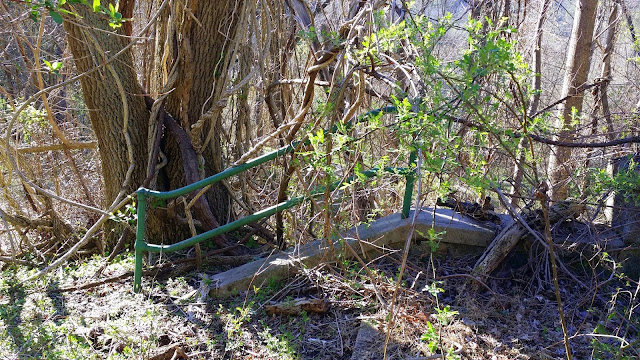 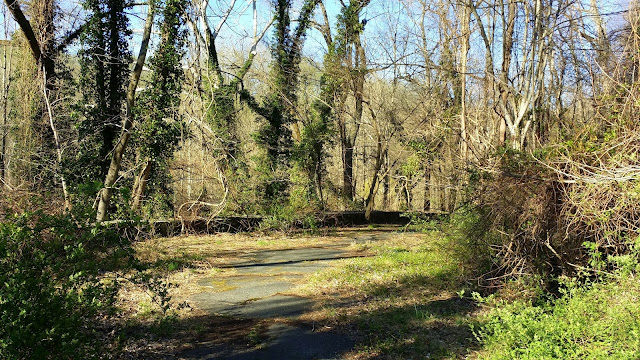 While we were in the area, we turned onto Hilltop Road so I could peer into and photograph the two old stone cottages still lingering along the road. Empty and abandoned buildings filled with ghosts and shadows inspire a curiosity in me I cannot deny. Like St Mary's, over the years, fires and vandalism have taken their toll on these two structures, as well as several others that formed the small mill town of Ilchester, near the recently destroyed Thistle Manufacturing Company/Ilchester Paper Factory. 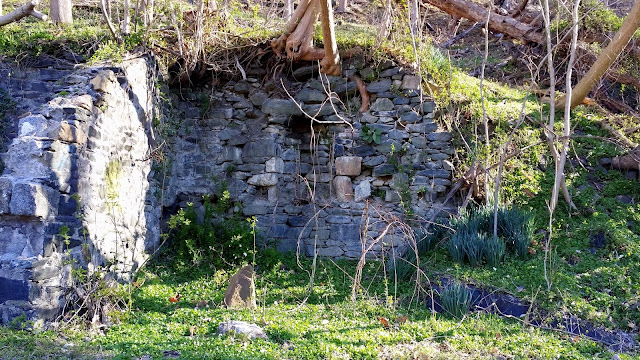 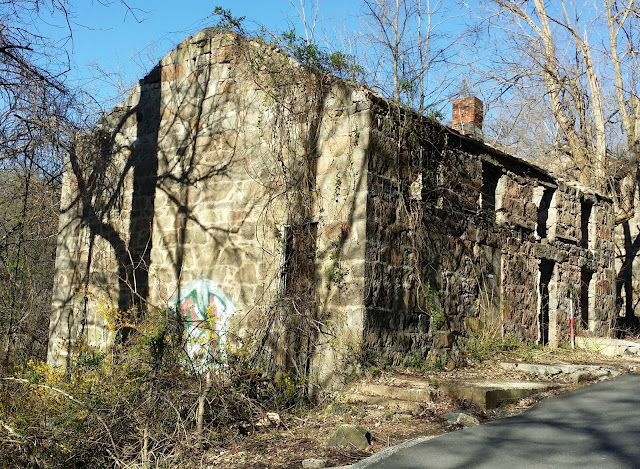 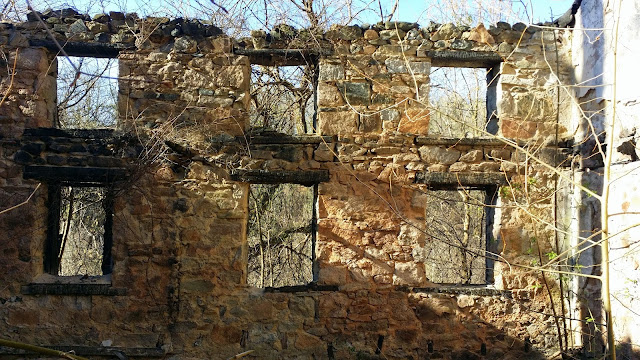 Ilchester started almost 300 years ago in 1761, when John Cornthwaite founded a wood grist mill called the Dismal Mill. Later, the Ellicott brothers acquired this property, incorporating it into Ellicott Mills (which later became Ellicott City). The site was too good to ignore, and another factory was proposed for the site. The Ellicott's stipulated that the new factory as well as the Dismal Mill downstream would not operate as a competing flour mill, and in turn, the Ellicott's could not sell liquor on their land.

The 100 employee mill building was built of local granite, along with at least five stone buildings to support laborers and a general store. The two remaining stone cottages are all that remain today of those buildings. There are several wooden houses still on the slopes above the two stone cottages -- all abandoned and collapsing upon themselves. 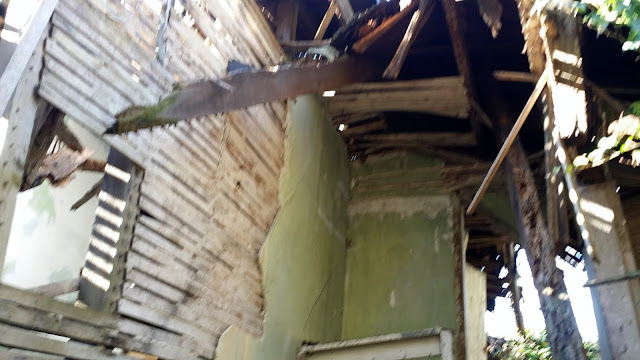 Today, nearby Columbia, a planned community established in 1966, has overtaken Ellicott City's prominence in Howard County. Perhaps our modern-day fascination with St Mary's and the stone cottages of Ilchester serves as a fading reminder that the mark we place upon this great land are only temporary. Nature is an inevitable force, slowly removing the remnants of these historical structures.

Update: Later, we returned to the area to explore even further, and we found the "missing" cupola. Read about it here.

Know before you go: Park beneath the railroad tracks on Illchester Road to view the steps. To get a bird's eye view of the site, hike the Buzzard's Rock trail off of Hilltop Road.

Websites: For additional (and better) photos of the ruins in 2013, check out http://patch.com/maryland/ellicottcity/ruins-at-st-marys or http://www.abandonedcountry.com/2013/12/30/st-marys-college-and-chapel-or-hell-house-the-wages-of-time-and-mischief/.

Hours: Patapsco Valley State Park is open dawn to dusk. Because of the rubble and debris, St Mary's is hazardous after dark.

Dogs: So yes, in the other parts of Patapsco Valley State Park. But... all the glass and metal detritus around the St Mary's site poses numerous hazards for their sensitive noses and paws. 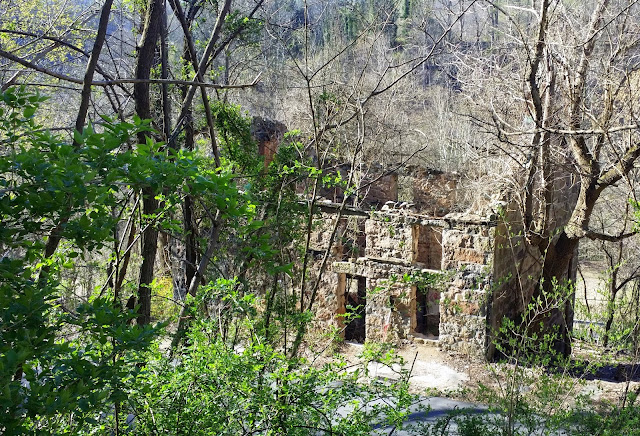 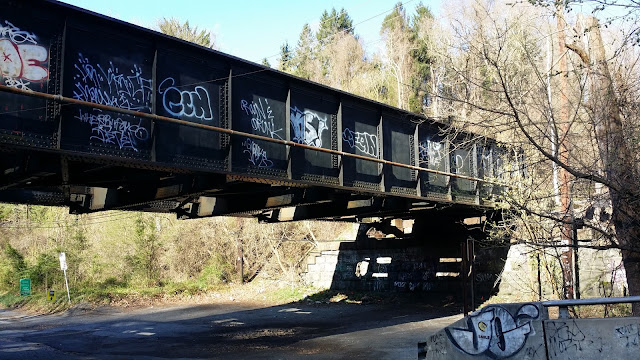