Reaching for the Moon: the Story of Barbara Johns and Prince Edward County Public Schools

But what if the schools simply closed and didn't reopen? What if the "snow day" was permanent, and even after the snow melted, students still couldn't return to school? Would the students continue to play outside and cheer "No more school!"? wondered Shirl Nunnally Early in an article recalling those days. 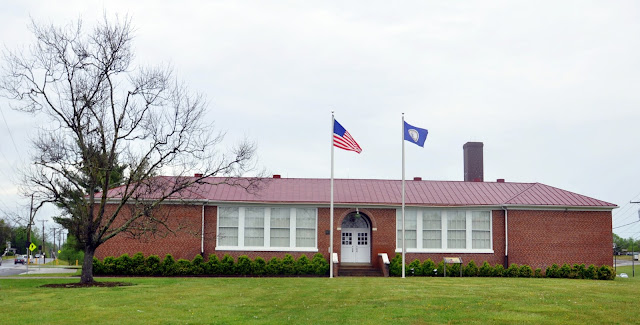 In the fall of 1959, Prince Edward County public schools failed to re-open for the school year, and remained locked shut until 1964. If you wonder, how could this have happened, then I recommend you visit Moton High School in Farmville, VA, which is now the Robert Russa Moton Museum and National Historic Site. This post is the story of those eventful years that led to a profound change in this country.

Built in 1939 for a student population of 180, by 1951 Moton High School was heavily overcrowded at 450 students. It houses six classrooms and an office arranged around a central auditorium. It had no cafeteria or restrooms for teachers. Temporary classrooms were built of wood and tarpaper, that leaked when it rained and froze the students during the winter. School supplies were hand-me-downs from the white high school across town. Students arrived on old buses that sometimes could barely run. A school bus broke down on rail road tracks in March 1951 and was subsequently hit by a train, killing five Moton High School students.

The struggle for civil rights took place not just on buses and at lunch counters, but also in classrooms and courtrooms. Prince Edward County's students started their county, the state, and the country on a 13-year-long journey from segregated to integrated public schools. Barbara Johns, a 16-year-old high school junior, started everyone on that journey by calling an unplanned student assembly and speaking passionately about the disparity between schools for white children and their school, Moton High School, on April 23, 1951. She spoke of the need for a new school and adequate supplies, including buses. 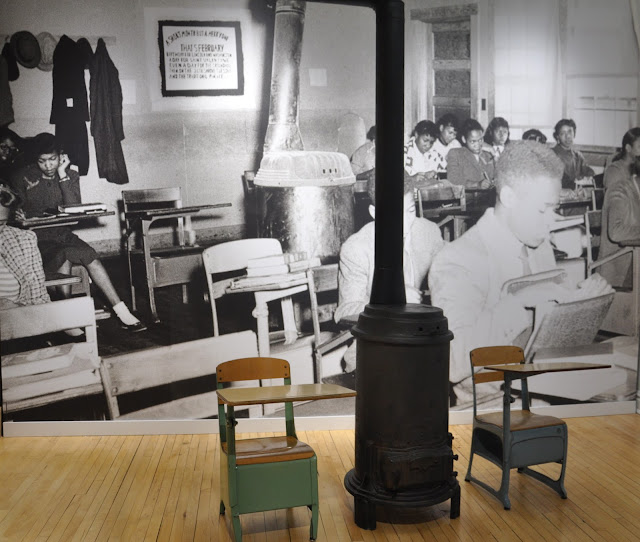 Her speech led to a "strike" by the Moton students, who eventually met with the local school board and school officials and consulted with Reverend L. Francis Griffin, pastor of the First Baptist Church. Johns and another student wrote a letter to attorneys Oliver Hill and Spottswood Robinson, who were affiliated with the National Association for the
Advancement of Colored People (NAACP). The two lawyers agreed to take their case if the students had their parents' support AND were willing to challenge the constitutionality of segregation.

On May 23 (1951) Hill and Robinson filed suit in federal district court in the case, Davis v. County School Board of Prince Edward County, Virginia, charging that inequalities and discrimination in educational facilities existed and that segregation was unconstitutional.

The Moton High School suit wasn't the only one in the nation, nor the first. The NAACP had initiated a legal campaign in the 1930s, and by the time Davis was filed, similar cases were already being litigated from South Carolina, Kansas, Delaware, and Washington, DC. The Supreme Court decided to combine and hear the cases at one time under the Kansas case, Brown v. Board of Education of Topeka.


The outcome we know. On May 17, 1952, the Supreme Court declared segregation unconstitutional. How schools were to be integrated was not specified by the Court until May 31, 1955, when the Court issued "Brown II," which ordered all public schools to integrate. Believing that as fell Virginia, so would the rest of the south fall, in 1956 the Virginia General Assembly had empowered the governor to close any schools under court order to desegregate, with the intent to resist implementation of the order to desegregate in an effort called "Massive Resistance."

Thus, in 1958, schools in Norfolk, Charlottesville, and Warren County were closed, and remained so until January 1959, when both Federal and state courts declared the 1956 laws unconstitutional. Although statewide "Massive Resistance" was effectively dead, the General Assembly adopted tuition grant programs and "freedom of choice" plans that delayed widespread desegregation for another decade.

But Prince Edward County wasn't having any of it. The Board of Supervisors refused to fund the schools, effectively shutting them down.

The 1446 white students went to Prince Edward Academy, a private school supported by segregationists. The 1700 African American students had few alternatives. Although some students went to live with relatives in other counties, most could not, depending on New York state college students and churches for their education. One of those was Shirl Nunnally Early. Meanwhile, the NAACP challenged the closing of Prince Edward schools in Griffin v. County School Board of Prince Edward. While the Court grinded toward its decision, "Free Schools," open to all students, opened in Prince Edward in 1963. Finally, the Supreme Court ruled that Prince Edward County's schools must be integrated AND opened in 1964.

In 2001, the Moton Museum opened, committed to the preservation and positive interpretation of the history of civil rights in education, specifically as it relates to Prince Edward County. But it has meaning well beyond Prince Edward County and Virginia.


The museum moved me, more than I'd expected. The exhibits lead visitors through the events, explaining the background leading up to the Moton student strike and the events that followed. You emerge with an appreciation for today's educational system, for all its faults. You also gain an appreciation of conditions before desegregation, and how difficult and tense the struggle for equal educational opportunities was.

I am awed and proud to say that my sons don't see color and race the way my generation and the ones before me do. In our middle-class, suburban neighborhood in Maryland, my youngest son has friends of many cultures and heritages, and the minority of those friends are white. So times have changed, and for the better. Not to say we don't have further to go. But what would Barbara Johns have thought about how desegregation has made those friendships possible?

We visited Moton Museum on the same day we spent exploring other fun things to do around Prince Edward County and Farmville, VA. (Please check out the nearby Civil War battlefield Sailor's Creek Battlefield State Park, the challenge of ziplining and the ropes course at Sandy Creek Retreat and Outdoor Adventure, and the High Bridge Rail Trail.)

Know before you go: There's enough to do in the area to keep yourself busy two days. If you do, then consider staying at one of the quaint, but comfortable, cabins at Sandy River Retreat, in Rice.

Getting there: 900 Griffin Blvd (at South Main Street), Farmville, VA

Hours: Mondays through Saturdays, noon to 4 p.m. and by appointment

Have you daytripped somewhere interesting? I'd love to hear what you're doing! Email [email protected] if you're interested in being a guest-blogger!
Posted by Jody Arneson at 8:09 PM