Serenity at Maryland's Grotto of Lourdes

I don't normally visit religious shrines, but sheer curiosity drove me to explore this uniquely Maryland Catholic shrine near Emmitsburg. I'd been driving past Mount St. Mary's College, located along U.S. 15 since I was a kid. The college nestles against the base of the Catoctin Mountains in northern Frederick County. Behind the college looms a statue of Jesus set on a high tower. I'd always thought that statue was mysterious. But we never stopped. I wasn't brought up Catholic, nor was my family of a religious bent: there was never any reason to stop.

So that's where curiosity came into play. One day last February my husband and I were driving up to Gettysburg and we decided to stop (we were also playing Ingress, and there are a number of portals at the college and the Grotto). We ended up going back early summer with a family guest, who, being Catholic, expressed an interest in seeing the Grotto.

Elizabeth Ann Bayley Seton, (August 28, 1774 – January 4, 1821) was the first native-born citizen of the United States to be canonized by the Roman Catholic Church (September 14, 1975). She established the first Catholic school in the nation, at Emmitsburg, MD, where she founded the first American congregation of religious sisters, the Sisters of Charity. She was a woman of prayer and service. 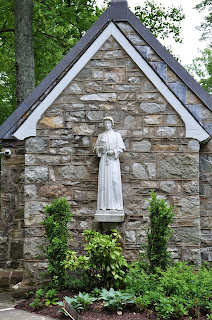 Despite coming from a wealthy family and marrying a wealthy man, the United Kingdom's blockade of Napoleonic France and the loss of several of her husband's ships at sea led to bankruptcy. The stress exacerbated his illness (tuberculosis), and he and Elizabeth went to Italy for his recovery. He died shortly after arriving. It was in Italy that Elizabeth was exposed to Catholicism, and she ended up converting shortly after her return to New York City. Wealthy, educated widows such as Elizabeth had few options to earn their livelihood, but becoming an educator was one of them. Widows often opened up academies for young women, and so Elizabeth did, but as news of her conversion to Catholicism spread, families withdrew their daughters.

Her story became a Maryland story when, in 1809, she moved down to Maryland on the invitation of the Sulpicians, whom she had met during her conversion. A year later she established the Saint Joseph's Academy and Free School, a school dedicated to the education of Catholic girls. And there her story coincides with that of Father John DeBois.

DeBois was a French priest who fled the French revolution. During that turbulent time, priests were forced to denounce their loyalty to Rome. Many, like Debois, chose to flee. DeBois ended up in Richmond, where he was befriended by the likes of Patrick Henry and James Monroe. In time, he was appointed the responsibility of caring for the growing Catholic population near the Appalachian Mountains. He chose as his base Frederick, where he founded the Catholic church that is still there today: St Johns. Six years later, he moved to nearby Emmitsburg, where he founded Mount St. Mary's College and became its first president. The seminary trained missionaries, and was located on one of the major trans-Appalachian routes. 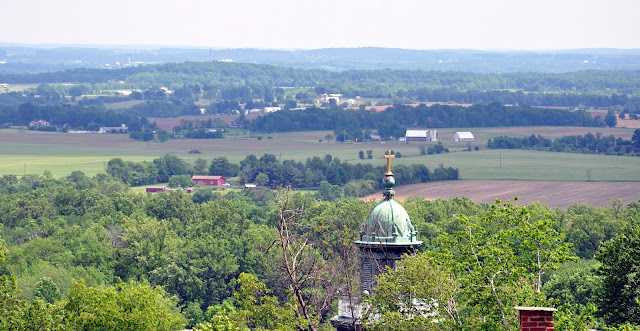 The campus of Mount St Mary's includes The National Shrine Grotto of Lourdes, which draws thousands of religious pilgrims and tourists annually. The Grotto was first established in 1805 by the DuBois. In 1875 the Grotto was refurbished by Father Watterson to be a stone replica of the miraculous Our Lady of Lourdes in France. 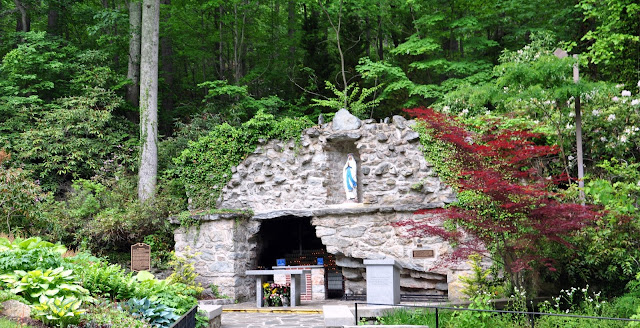 It wasn't until 1975 that Elizabeth was recognized as a saint. Pope Paul VI canonized her on September 14, 1975, in a ceremony in St. Peter’s Square. The words he spoke about her appeal to me: “St. Elizabeth Ann Seton is an American. All of us say this with special joy, and with the intention of honoring the land and the nation from which she sprang forth as the first flower in the calendar of the saints. Elizabeth Ann Seton was wholly American! Rejoice for your glorious daughter. Be proud of her. And know how to preserve her fruitful heritage." Today, her remains are entombed in the National Shrine of Saint Elizabeth Ann Seton in Emmitsburg.

The path leading up to the Grotto offers the stone-encased copper Stations of the Cross, installed along the path in 1958. The water itself, which many bring containers to fill, comes from a mountain spring. The water (usually) is drinkable and is filtered for impurities according to state law (when we were there last May it was turned off due to an unusually high bacteria level). It flows into a pool surrounding a statue of Mary made of Carrara marble; the statue is a replica of the statue in Lourdes, France, and was also installed in 1958.

Following the path back from the Grotto and the pool of water, you'll encounter a series of 15 lovely mosaics, the "15 Mysteries of the Rosary," which recount the biblical stories of Jesus and Mary. These were imported from Italy and installed in 1966. Interspersed along the way are statues of holy men and women, such as St Francis of Assisi. It is a quiet, reflective path -- even for those like me, who don't practice Catholicism.

If you're a tombstone tourist like I am, then the nearby St Mary's Cemetery holds some interest as well.

Have you daytripped somewhere interesting? I'd love to hear what you're doing! Email [email protected] if you're interested in being a guest-blogger!
Posted by Jody Arneson at 6:58 AM

Email ThisBlogThis!Share to TwitterShare to FacebookShare to Pinterest
Labels: Maryland