The Logan Inn is a stand out. You could go on a day trip there for dinner, as the inn's restaurant offers excellent choices on its menu, and then enjoy browsing through New Hope's antique and boutique stores, or explore other Bucks County, PA attractions. 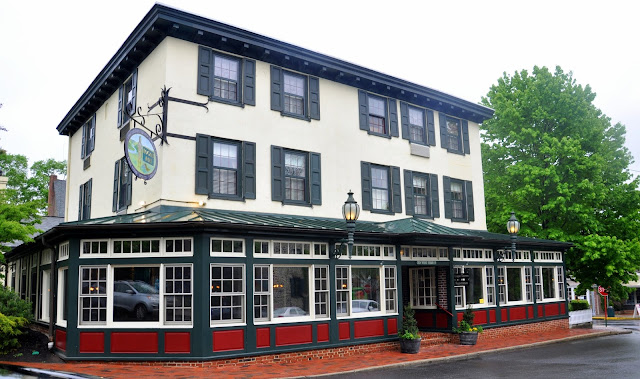 The Logan Inn, one of the five oldest inns in America, is known as the longest running inn and tavern in Bucks County. It also is purported to be the most haunted building in New Hope -- and after staying there two wonderful nights, I'm not going to quibble with that assessment. We went up to New Hope on May 13. It wasn't lost on us that we would be staying at a haunted inn, in room 14 -- which is the inn's 13th room -- on Friday the 13th.

Despite its age, the Logan Inn was recently renovated, and offers fine dining, live music and events. Its 19 spacious rooms are decorated in an upscale contemporary style and provide modern amenities, offering a nice combination of charm and comfort. It's only when you leave your room that you realize, wow, I'm staying in this really old building.

The original inn and tavern, cleverly called Ferry Tavern, was built in 1727 by the founding town father of New Hope -- then called Coryell's Ferry --  John Wells, who also ran a ferry across the river to and from New Jersey. A terrible fire in 1790 destroyed the town's mills, and thus the town's economy. Shortly thereafter, however, Benjamin Parry, another prominent local citizen, rebuilt his mills along the Delaware River, calling them "New Hope." The name stuck, and eventually became the name of the town itself. 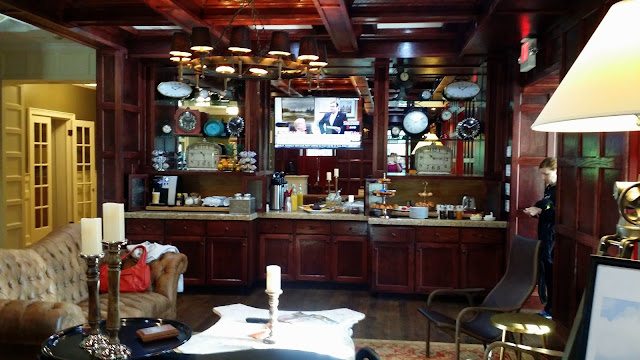 Both the inn and tavern have expanded over the years. Additions to the inn wrapped around the earlier portions. The basement, dining area and bar are the oldest parts of the inn, with newer additions and areas added onto these areas. Around the American Revolution, the inn probably only had a second floor for guests to spend the night. Sometime later on, a third story was added.

Eventually, a modernized kitchen, and new inside and outside eating areas were added, giving guests the choice or either eating inside or outside on the lovely patio area. The menu features a variety of dishes, with the entrees ranging from meatloaf and burgers to filet mignon. My friend Lisa and I enjoyed lunch on Saturday at the restaurant. The first sunny day after almost three weeks of rain, we opted to eat outside, enjoying the view of the street. 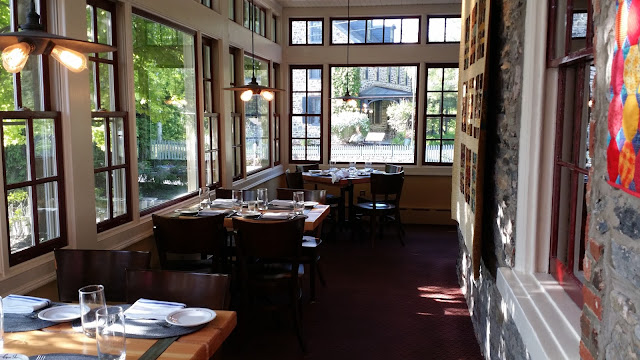 Though today Logan Inn offers just 19 rooms on the second and third floors, earlier renditions of the guest rooms were probably much smaller, and more in number. Over the years, renovations and restorations transformed the rooms and outside areas to what it is today -- a lovely inn that invokes colonial-era charm with all of the comforts and amenities we expect for a comfortable stay.
During the Revolutionary War, the Ferry Tavern gave aid and comfort to George Washington and his troops, despite the real consequences they risked by angering our British colonial overlords. The inn provided George Washington and his troops a place to camp, eat, drink, and keep their wounded in the inn, and store the dead in the basement, until winter had passed. 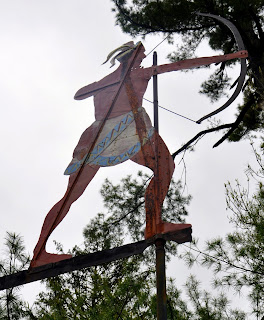 By 1828, the ferry was no longer running, in part because Benjamin Parry built a bridge across the river -- wiping out the need for a ferry; Parry collected tolls on bridge traffic. During a town-wide celebration of George Washington's birthday, on February 22nd, 1828, the inn was renamed The Logan Inn, in honor of a Lenni-Lenape chief, whose kindness and hospitality toward the townspeople was greatly appreciated. This Indian chief had developed a close relationship with James Logan, and took James' name, to testify to the chief's admiration of this man.
The townspeople collected funds to pay for a metal weathervane depicting the Indian chief, showing how much they appreciated this chief's friendship and help. They were spared the horrendous Indian attacks suffered by other communities located in other areas of Pennsylvania. A replica of this metal sign stands in the lawn of the Parry Mansion, just across the street from the inn.

We had two interesting experiences while staying at Logan Inn, in room 14. The first was the photograph of an orb, which I saw move across my phone camera screen -- I was grabbing some photos of the room for the blog before our stuff would make the room look too lived in! 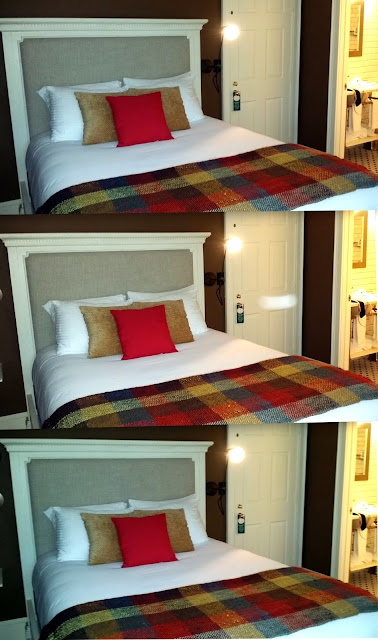 The second experience occurred on our second night at the inn. In the wee dark hours after midnight but well before dawn, I awoke, and heard a weak, possibly whispered or hoarse, cry, "help, help, help." Three "helps," well spaced apart. At first I thought it was my friend, experiencing a nightmare, but she seemed to be sleeping soundly, and rolled over soon after that, without waking. After a few wide-eyed moments, I also rolled over, pulled the covers up, and tried to forget it. Lisa, upon waking the next morning, didn't recall having any vivid dreams or nightmares that would cause her to cry out. 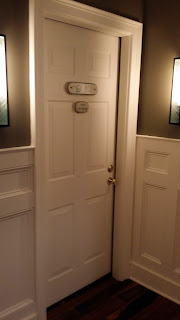 I'm not going to dissemble and say, I didn't think about it at all since then, because that would be a lie. I wondered if I'd somehow heard a ghost. In researching this blog, I came across several stories of inn hauntings, but the following one seems to match what I'd heard that night. During the Revolutionary War, dead soldiers were brought to the inn's basement for storage, until the frozen ground was thawed enough to bury them properly. Supposedly one soldier was brought in, believed to be dead. In the dark basement, surrounded by his dead comrades, he awoke, and weakly cried for help, until he succumbed to his injuries.

There are several other ghosts associated with the inn, according to Haunted Houses.com. Many of the hauntings center on room 6, whose door we eyed nervously and enviously each time we passed it!

It's ideally located to enjoy the town of New Hope -- right down in the bustle of the little town, but offers ample parking, and sits far enough away from the road that it won't disturb you. Come stay at Logan Inn, if you dare! You won't be sorry if you do!!

Parking: There is ample parking behind Logan Inn for its overnight and restaurant guests. 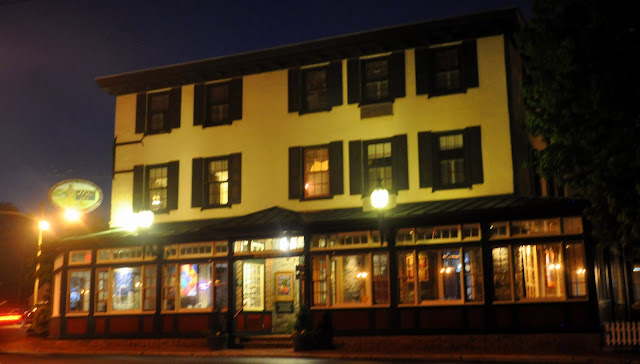