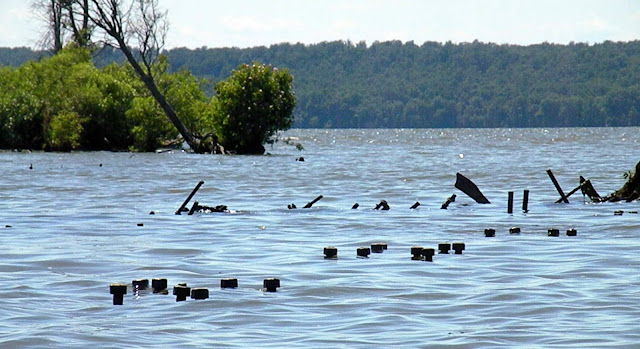 Mallows Bay is a small bay on the Maryland side of the Potomac River, in Charles County, MD -- about two hours away from Baltimore, and about 1 hour away from Washington, DC. The bay is the location of Maryland's "ghost fleet," or rather, the "largest shipwreck fleet" in North America, and is, essentially, a ship graveyard. You can enjoy these shipwrecks confident that no lives were lost here.

The first thing you notice when you arrive at the kayak launch point is the Accomak, a massive decaying ship jutting out of the water, a distance away from the launch point. Brought to Mallows Bay in 1932, the former ferry had been used to haul rubber from Brazil during World War I. 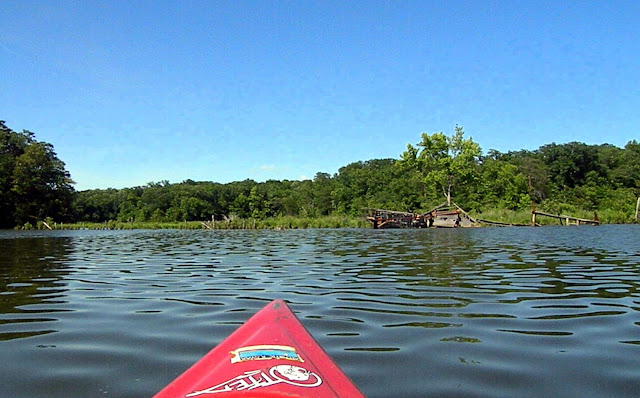 Because of the historical significance of the site, the bay was listed as an archaeological and historic district on the National Register of Historic Places in 2015. Mallows Bay also is well on its way to becoming a National Marine Sanctuary. It is right that this place should be protected. It is indisputably one of Maryland's secret treasures, and incredibly, eerily, beautiful. 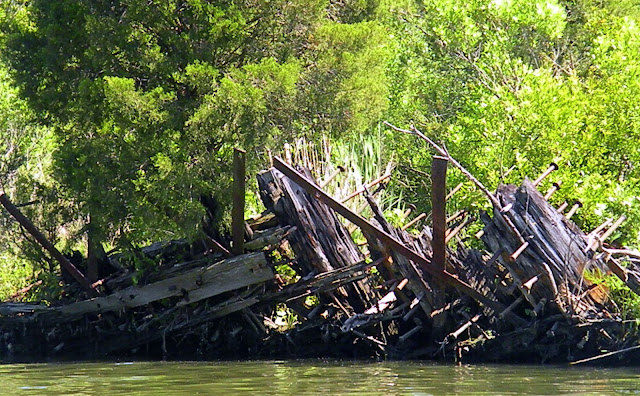 This small park contains more than 230 ships, many of which are from the United States Shipping Board Merchant Fleet Corporation that were purposely scuttled in the river. There are also ships -- long boats -- dating back to the Revolutionary War, as well as a wooden schooner dating from 1918. 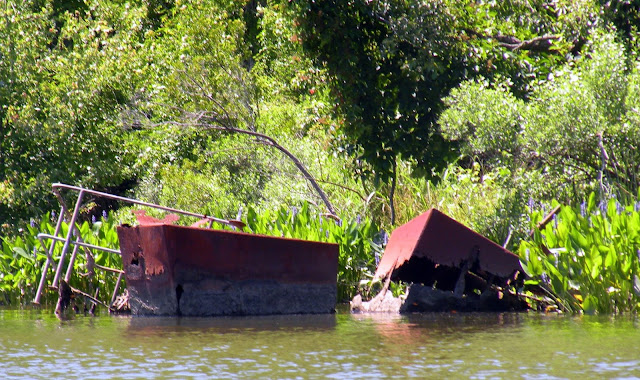 More than 100 of the vessels in the bay were poorly constructed wooden steamships, part of a fleet built to cross the Atlantic during World War I that was obsolete even before they hit the water, mostly because they were built when wood as a construction material had already given way to metal. With the end of WWI, the need for these vessels vanished. So now what to do with them? Outmoded and unnecessary, the decision was made to turn them over to scrapping companies. Eventually, in 1925, they were towed ignominiously to Mallows Bay, where many of them were salvaged (the Accomak is missing its stern, due to salvage) or burned. One of the shipwrecks recently caught fire, burning for several weeks, according to our tour guide -- either the work of vandals or a stray lightening strike, no one knows the exact cause of the fire. 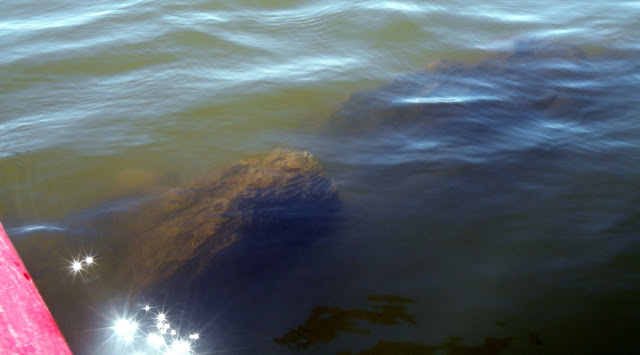 Later, Bethlehem Steel built a salvage basin during World War II to recover metal from the abandoned ships. As a result, the ships are in various stages of decay. Weather, tides, and the mud have eroded or swallowed many of the ships.

The ships gradually come into view as your kayak glides over the water surface. Some are higher above the water line than others, and others present a hazard to those not familiar with the underwater terrain. All evoke a sense of mystery -- as if we should not intrude on their watery graveyard. 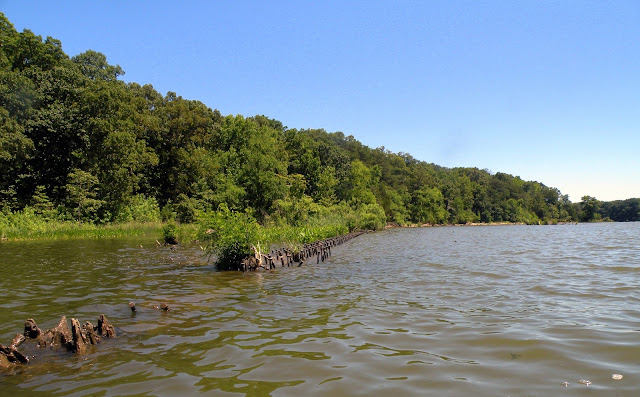 The ships form reefs and small islands that host an array of wildlife, including beaver and a variety of birds. I can practically guarantee you'll see grey heron, bald eagles, and osprey. We also saw terns and a variety of other birds I couldn't identify. It is really amazing how the shipwrecks have become part of the environment. In several cases, small islands have formed on the shipwrecks, and trees and plants are now part of the shipwreck, offering additional refuge for birds, and even a beaver lodge.

Although we paid for a guided tour, if you own a kayak, you may kayak around the shipwrecks for free. There were 12 of us last Saturday on our tour, which lasted for three hours just after low tide. Judy, owner of Atlantic Kayak Company and our tour guide, led us -- often single file -- through the maze of shipwrecks. 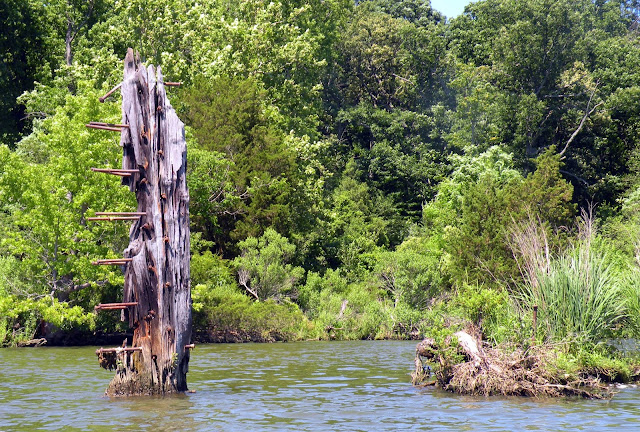 Like other places I have visited -- Daniels in Patapsco Valley State Park comes to mind -- the ghost fleet of Mallows Bay invites thoughts about our impact on the environment, which far outlasts the brevity of our existence. In both cases, the wrecks and ruins of human dreams and aspirations have accidentally created places of wonder and mystery. 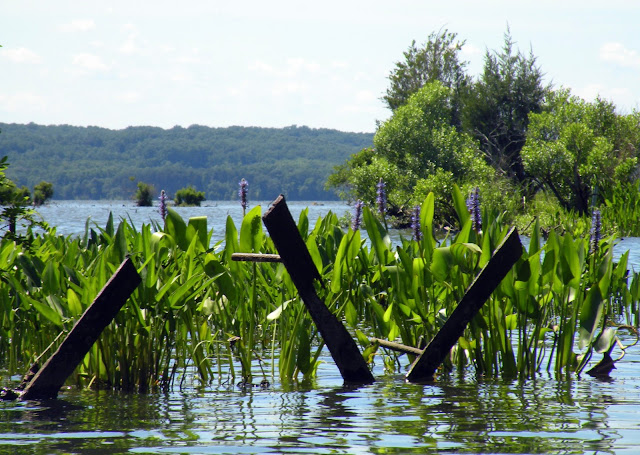 Know before you go: Wear water shoes. Bring a hat. Make sure you slather on sun block. It's a good idea to wear shoes you wouldn't mind getting wet.

Hours: The park itself is open dawn through dusk. However, Atlantic Kayak Company offers tours on weekend days during low tide; check their website for tour availability. 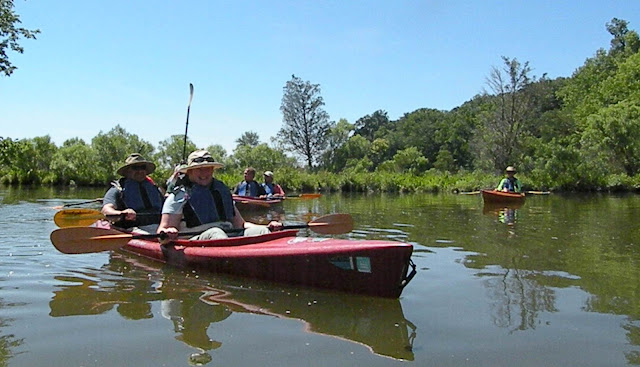