The Battle That Saved D.C.

True confession: Not only had I grown up in Frederick, MD, without ever going to see the Monocacy National Battlefield Park, which is a scant 9 miles south of Frederick, but I'd grown up without even knowing it had taken place.

To be fair to the local school system, I'm an Army brat, and had spent two years in high school in Panama. My American history teacher there pronounced state names such as Missouri and Louisiana like "Mizura" and "Loosiana." We heard a lot about Southern generals' victories. I came out of his class with the faint impression that the South had somehow pulled out the victory, which never made much sense to me, but then again, I wasn't an A student in history. It wasn't until adulthood that I connected Sherman's devastating March to the Sea with Southern defeat. My history teacher despised Sherman more than he despised Hitler. But we never made it to Hitler and World War II during U.S. History. For him, the Civil War still raged on in the tender grounds of his students' minds.

Thus it was with a bit of a shock that I learned about the Battle of Monocacy during a tour of Mount Olivet Cemetery two years ago (Confederate soldiers are buried there). I determined that I really needed to visit the battlefield.

It was called the Battle that Saved Washington DC. Otherwise, the Battle of Monocacy was another confrontation which the North lost.

In June and July 1864, General Grant's forces had General Lee's army under siege at Petersburg, VA. In an attempt to divert Union forces away, Lee sent Lt. Gen. Jubal A. Early's north through the Shenandoah valley, with the bold plan to attack Washington, DC and liberate Confederate prisoners of war being held by the Union at Point Lookout, MD.

On Saturday, July 9, about 6,800 Union soldiers were positioned at the bridges and fords of the Monocacy River. The higher elevation of the river's east bank formed a natural breastwork for some of the men, while others occupied the two block-houses and trenches dug near the bridges.The Confederates marched down from the north, and occupied the farm on the west bank, the Best Farm.

The driving tour takes you first to several stops around the battlefield, which took place over several local farms: the Best Farm, where the Confederates initially engaged the Union troops, then the Worthington and Thomas Farms on the east bank. You learn about the impact of the battle on local families and their slaves. You also get a little sense of the area's earlier history. On the Best Farm, there's archeological evidence of an earlier slave village when the farm had different owners, a family of French planters, the Vincendieres, who had fled from unrest in the colony of Saint-Domingue (now known as Haiti). They had a large population of slaves on the farm; contemporary accounts indicate the enslaved individuals were treated cruelly.

Eventually, the Union troops were pushed over the river, over the covered bridge, which they burned behind them, and the nearby railroad bridge. The Confederates were able to ford the river and the battle continued. Union troops rebuffed the Confederates over several attempts to push them further from the river, but eventually the Southern troops, superior in number, prevailed. Those skirmishes took place on the Thomas and Worthington farms.

The battle was the northernmost Confederate victory of the war. Wallace's troops retreated to Baltimore, while the Confederates continued toward Washington, DC, but the battle at Monocacy had delayed Early's march for a day, allowing time for Union reinforcements to arrive and protect the capitol. Thus, it was a strategic win for the North -- Wallace had met his objectives. The Confederate attack on Washington on July 12 was unsuccessful and they eventually retreated to Virginia.

A few weeks ago, my sister and mother, who both live in Frederick, took advantage of an open house to tour the Best family farmhouse. They shared their photos of the inside. Several years ago, the park was given funding to renovate the house -- the goal is to return it to the way it looked on 9 July 1864. When they started examining the house to plan the restoration, they discovered it was riddled with termites. Stabilizing the house took up all the available funding, indefinitely delaying the restoration. 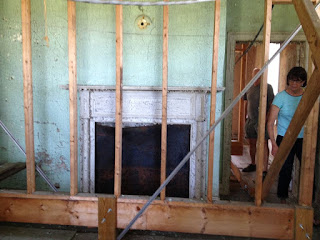 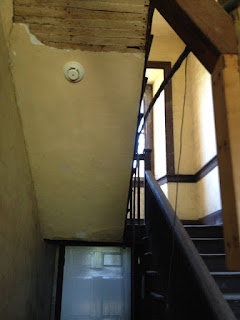 On Saturday, July 16, 2016, you have the opportunity to tour the Worthington House and look through the window where Glenn Worthington watched the battle. And on Saturday, August 20, tour the Thomas House, site of the heaviest fighting during the battle. Check out the battle scars during your tour.

Know before you go #1: At the visitor's center there are three excellent little brochures for sale; you'll only spend 3 bucks. Published by the National Park Service, "Thomas Farm," "Best Farm," and "Battlefield Trails: Battle of Monocacy Walking Tours," provide detailed explanations of the two major farm battlefields and walking tours.

Know before you go #2: Armed with the brochures, you can easily spend at least a half day exploring the battlefields, so leave yourself enough time to really explore.

Dogs: Yes for the walks, but no for the exhibits and battle explanation in the visitors center, which you really shouldn't skip.