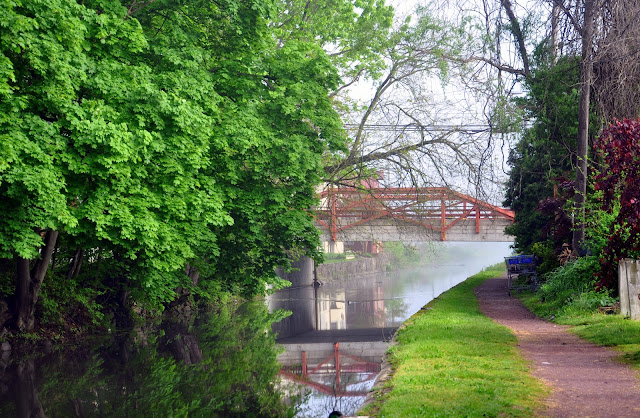 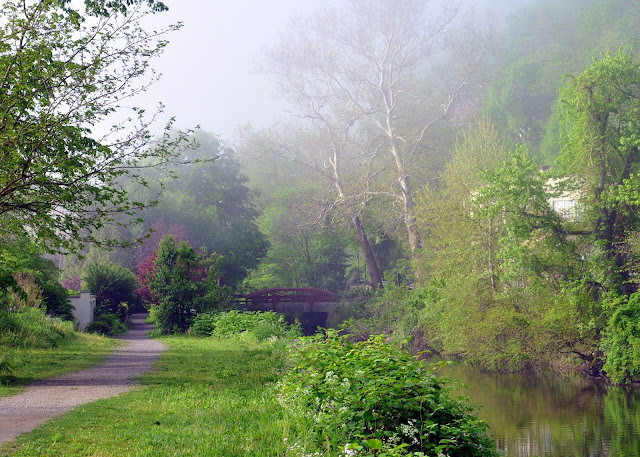 The 60-mile long Delaware Canal towpath runs from Easton to Bristol and is a National Recreation Trail. Once trod by mule teams pulling cargo-laden boats along the canal, the towpath is used today by walkers, joggers, bicyclists, cross-country skiers and bird watchers. During our four-mile walk, we encountered dog-walkers galore, joggers, families strolling with little kids, and bikers. It was a pleasant morning walk!

The Delaware Canal runs from the Lehigh River at Easton (home of The National Canal Museum and terminal end of the Lehigh Canal) south to Bristol. The Commonwealth of Pennsylvania built the Delaware canal as part of its Main Line of Internal Improvements to carry anthracite coal, limestone, cement, and lumber from the northeastern reaches of Pennsylvania to Philadelphia. Spurred by the early success of the Erie Canal in New York State, which had opened in 1825, the Delaware Canal opened in 1832. 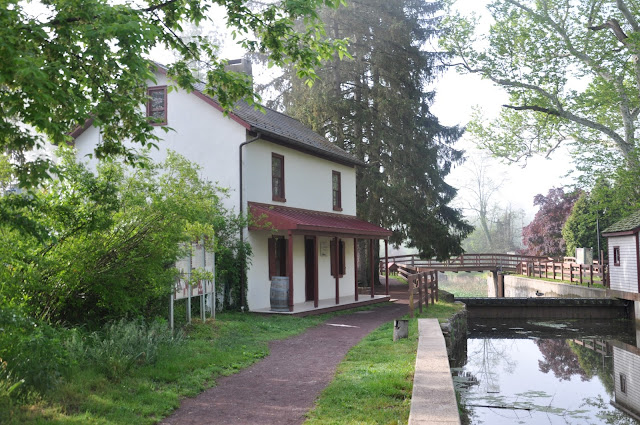 What's cool about this canal, beyond its lovely scenery, is that it still has most of its original locks, aqueducts, and overflows. According to the National Park Service, it was the "longest-lived canal in the country." 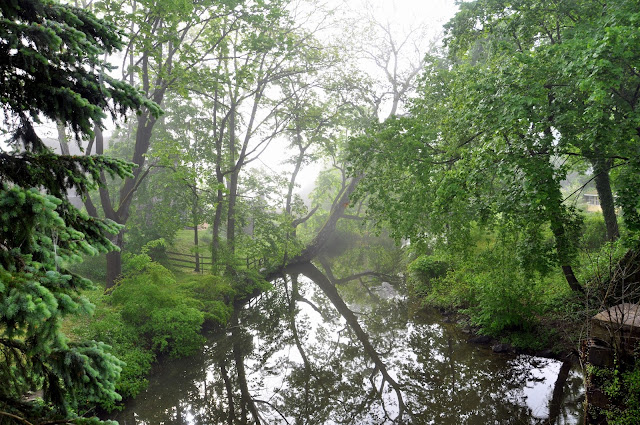 Because we were staying at the Logan Inn, in New Hope, we enjoyed easy access to the Delaware Canal towpath, which beckoned to us Saturday morning (we were up for the Continental breakfast and some much-needed coffee bright and early at 7 a.m.). We crossed the Inn's parking lot and turned left, onto the towpath, and began walking. 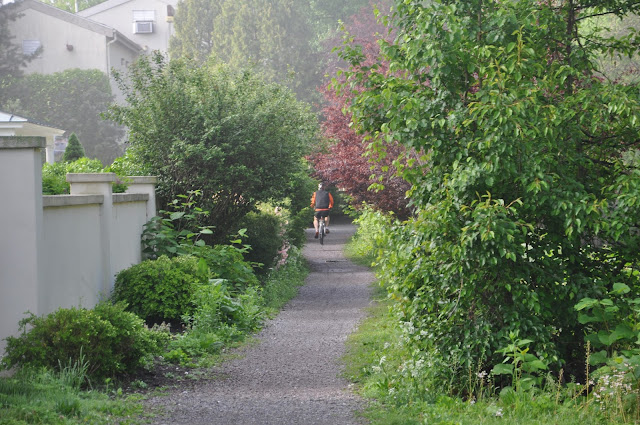 We decided that the next morning, we would instead turn right. But we were overtaken by events -- instead the next morning we headed out to Ringing Rocks County Park, but more on that in another post! 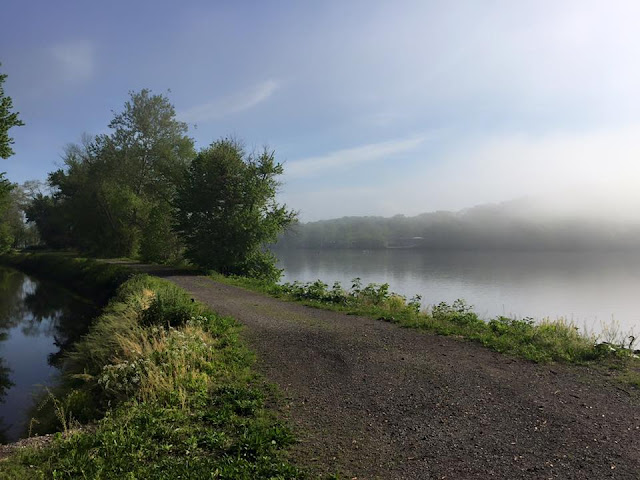 The segment that flows through the center of town is lovely -- a hidden oasis between town streets and back yards. We walked behind the Parry Mansion and several other historic homes. Once on the south side of town, the canal curled closer to the river, and the mist rising in the early morning coolness created a mysterious, fantastical scenery. And that's when both of us fell in love with the Delaware Canal.

Both my friend Lisa and I are fans -- dedicated fans -- of the C&O Canal. We've both biked it, or at least, a variety of sections of it -- Lisa has biked the entire length with her husband. I find myself frequently returning to the C&O -- it's a jewel of Maryland, and as longtime readers of the Blog know, a place I return to, again and again. But the Delaware surpasses the C&O in just the sheer beauty, much of which I believe is because it's entirely watered, unlike the C&O.

For most of our walk, we were in easy sight of the Delaware River. In fact, the canal runs parallel to the Delaware River from Easton, where over the years, it transported millions of tons of anthracite from the privately developed Lehigh Canal to the city and port of Philadelphia. 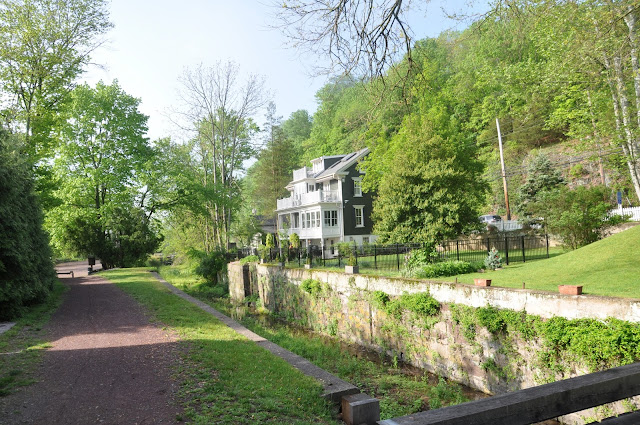 Know before you go: Across the Delaware River, the 70-mile long Delaware and Raritan (D&R) Canal State Park is one of central New Jersey’s most popular recreation corridors for canoeing, jogging, hiking, bicycling, fishing and horseback riding. The canal and park are part of the National Recreation Trail System. Together, the Delaware Canal State Park and the Delaware and Raritan Canal State Park have formed a series of looping trails connecting Pennsylvania and New Jersey, using five bridges. By simply parking in one of several areas located along the loop trail, visitors have easy access to the canal towpaths in both states, and can ride, walk of jog a complete loop back to their car. Loop trail connection bridges are in the Pennsylvania towns of Uhlerstown, Lumberville, Center Bridge, Washington Crossing, and Morrisville. 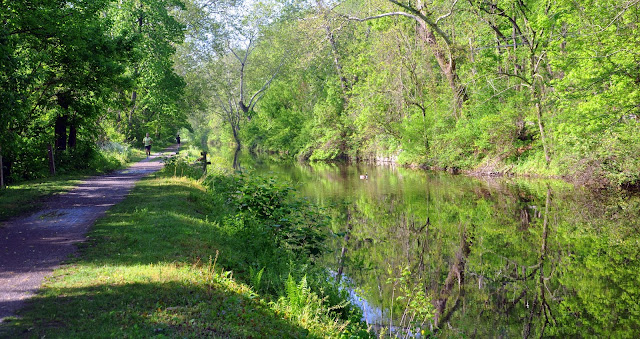 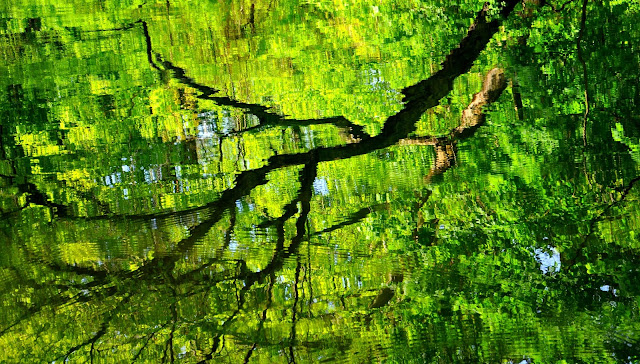 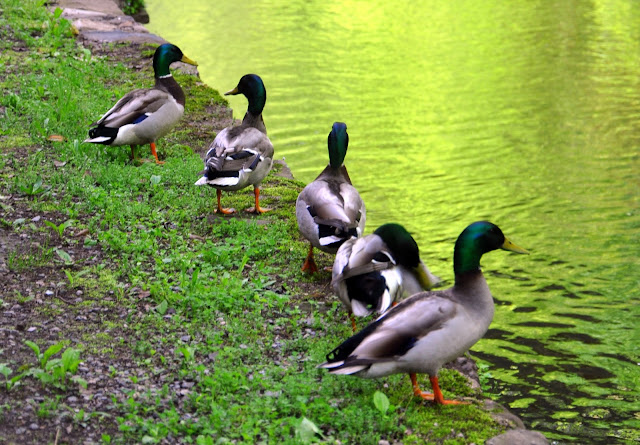