The thought of rocks that do more than just lie around on the forest floor doing nothing more than, well, looking like rocks lying on the ground kind of intrigued me. I learned about the ringing rocks through one of those corny Facebook notifications, which promised, if we visited, that we'd encounter a fascinating "field" of 10-foot-high rock piles that make ringing sounds when struck. 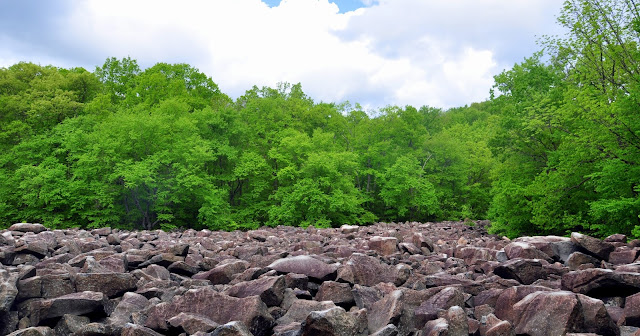 We headed north out of New Hope (where we were staying at the Logan Inn), on Route 32 and drove along some quaint country roads, through little towns along the Delaware River to Ringing Rocks County Park. The park entry sign is kind of shabby, and we wondered, "Is this it?" I worried that I dragged us away from seeing something better.

But we were there, so we parked the car. At 8:30 a.m., we were the only ones there. There's a sign, saying simply "Trail." I guess that was it! Just beyond the sign, the trail forks. We arbitrarily chose to veer right. 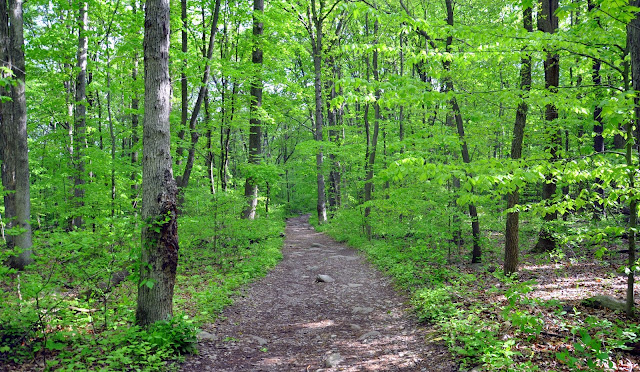 We noticed rocks with dings in them, as if from a hammer. "Oh, I wonder if this one rings?!"

Luckily we'd remembered to bring a hammer along. 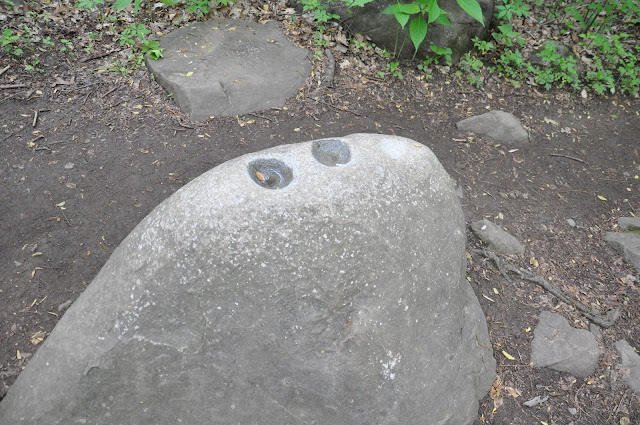 We were disappointed when we heard a dull thud. Nope. Along the trail, we tried rock after rock.

Then we saw, to our left, a vast boulder field. We headed toward it, trying several rocks on the way to it. Still no ringing. Just dull thuds. Now I was really worried -- was this expedition a waste of time? 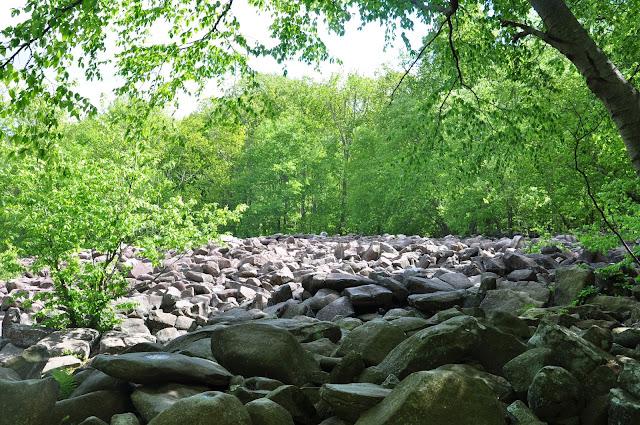 We didn't go into the boulder field however -- it looked like hard going, and the trail led further into the woods. It looked easier. Perhaps there was something else. Perhaps the ringing rocks would be there. 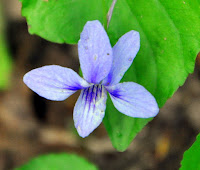 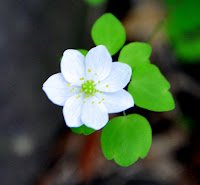 No ringing rocks (although we tried a couple). Instead, the trail veered left at an outcropping of boulders and headed downhill. We saw lovely woodland wildflowers, which I was looking for, since we'd also just visited the nearby Bowmans Hill Wildflower Preserve.

Then we heard the sound of a waterfall, and the woods were lovely, so on we went. 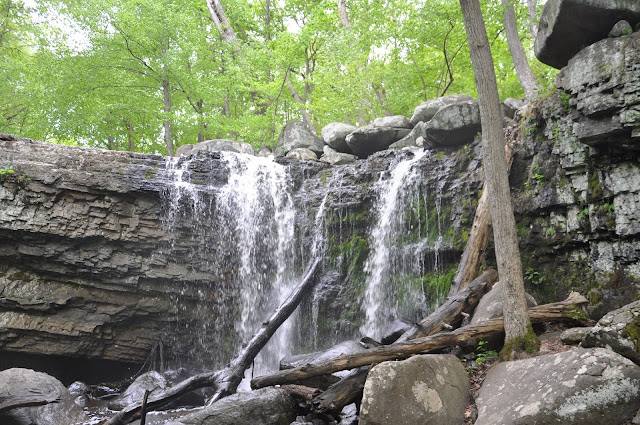 And the waterfalls were, indeed, lovely, and well worth the slight additional hike (all told, to the falls and then down stream a bit and back to our car, the "hike" was only just over 1.5 miles). I think the waterfalls often get overlooked in the excitement of the ringing rocks, and that's a shame -- the park offers more than "just" the show-offy boulders.

It seems almost by accident that this park exists at all, and that we could visit that Sunday morning to experience the park is due to the efforts of one man: Abel B. Haring.  The seven-acre boulder field was purchased in 1895 by Haring, president of the Union National Bank in Frenchtown, NJ. Apparently Haring wished to protect the ringing rocks from development, and even refused an offer from a manufacturer of Belgian blocks for the right to quarry the stones. On August 22, 1918, the land which contains the Bridgeton boulder field was donated by Haring to the Bucks County Historical Society. The grant included 7 acres of land. A right-of-way was granted by John O. McEntee for access to the park. Later the land was transferred to Bucks County and operated as a county park. Additional land acquisitions have increased the size of the park to 128 acres.


Most people don't normally go around hitting miscellaneous rocks with hammers. One wonders who decided it was a good idea to hit these rocks -- and why? What made these rocks seem like good rocks to hit with a hammer? Who knows how it was discovered that these rocks ring, but I'm grateful to the curious person who discovered it.

So why do the rocks ring when struck? It was only in the 1960s that scientists figured out that when the rocks were struck they created a series of tones at frequencies lower than the human ear can hear. An audible sound is only produced because these tones interact with each other. In other words, although the rocks we encountered in the earth along the path might also be ringing rocks, because they weren't in contact with the other rocks, they only gave a dull thud. Had they been stacked hither thither on top of each other, then they might of rang. Or maybe not. Because rocks don't just ring because they're in a boulder field. 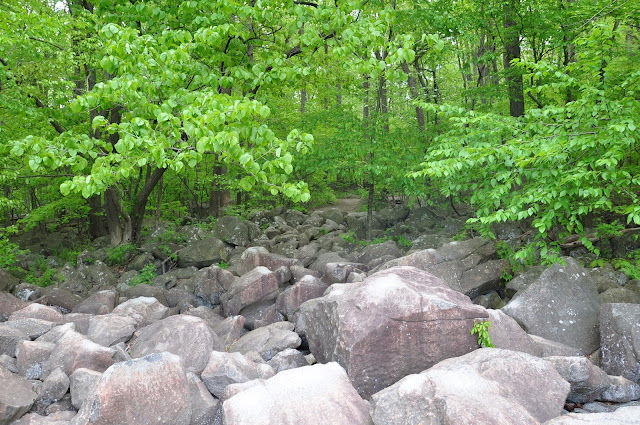 In fact, there are only a handful of boulder fields that have ringing rocks. There's been some conjecture about the structure of the boulder field itself, that it has to slope a certain way, along the contours of the ground below, etc. The explanation of the geology behind both the formation of the rocks and the boulder field deposit were a little too complicated for me to fully understand.

The ringing rocks in the boulder field are kind of special, because they are a little tense. So far there has been only one published scientific experiment on the source of the ringing ability. In the 1960s a Rutgers University professor did an informal experiment where specimens of 'live' and 'dead' ringing rock boulders from the Bucks County park site were sawn into thin slices and then measured for changes in shape. His measurements indicated the rocks were under internal elastic stresses. Rocks from the same field and composition which did not ring, i.e., were "dead," did not indicate the same internal elastic stresses. This is a simplified explanation, that leaves out important details of his findings, but that's about it -- the rocks are somehow compressed, probably due to the ancient glaciers which moved over and created the boulder fields in the first place.

Dogs: Yes on the trail, no in the boulder field. 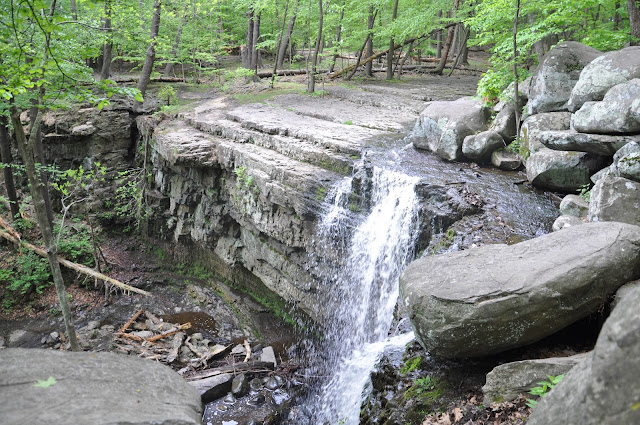 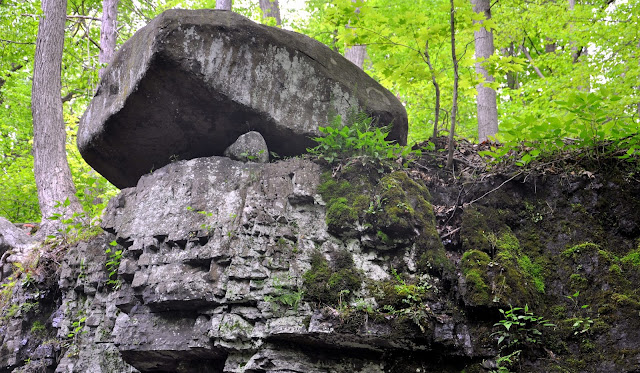