Fort Washington is a War of 1812-era fort which has stood sentinel, guarding Washington DC through most of this nation's history, although it didn't always look like it does now. The original fort, overlooking the Potomac River, was completed in 1809, and was originally called Fort Warburton, but later renamed. During the War of 1812, the fort was destroyed by its own garrison during a British advance.


When completed in 1809, Fort Warbuton was the only fortification on the Potomac River. Perpendicular earthen walls stood 14 feet above the bottom of the ditch that surrounded the river side of the fort. A tower facing the river contained six cannon. It mounted 12 or 15 guns which commanded the river below its position.

On June 18, 1812, in response to British impressment of American sailors and other grievances, the United States declared war on the Great Britain. Our former colonial overlords more or less ignored us until the Napoleonic Wars had ended, but on August 24, the British defeated the main militia force defending the Capital at Bladensburg and captured and set fire to the Capitol. Apparently, game on!

Then, August 27 came. The British fleet of 10 ships approached the fort, expecting resistance. Alexandrians, living just a few miles up river, expected the fort to defend and protect them. However, Captain Dyson, the commander of the fort, decided his meager troops were no match for the British, and proceeded to abandon the fort, blowing it up as he left. The Brits paused in their journey up the Potomac to finish destroying the fort, and then headed toward Alexandria, VA. (Captain Dyson was subsequently court martialed. He was dismissed from the service, but received no other punishment.) 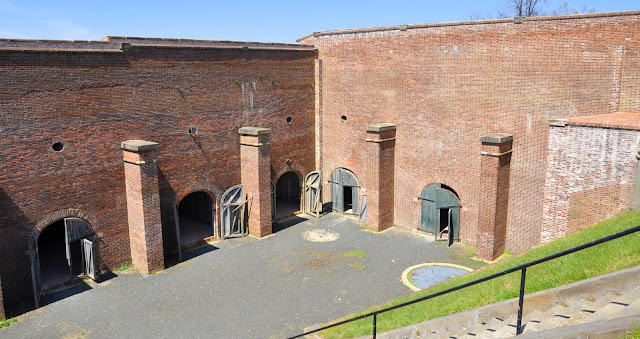 From this ignominious defeat, though, Fort Washington rose. By December of that year, a treaty of peace had been signed and the war with Britain was over. In 1815, work started under Pierre Charles L'Enfant just after Dyson had abandoned the fort was continued under Lt. Col. Walker Armistead of the U.S. Army Corps of Engineers, although it would be another nine years before the new fort, now named Fort Washington, was completed.


In the 1840s, the fort underwent an extensive remodeling program to bring it up to the standards of the third generation of coastal fortifications. Work crews constructed 88 permanent gun platforms, increased the height of the east wall, rebuilt the drawbridge, strengthened the powder magazines, and added a caponniere to protect the approaches from Piscataway Creek.


Growing shortages in the number of personnel after the Mexican War stretched the resources of the U.S. Army. At Fort Washington, as at many other posts, the garrison was withdrawn leaving only a skeleton maintenance staff. In fact, between 1853 and 1861, only one soldier, Ordnance Sergeant Joseph Cameron, was stationed full-time at the fort.

For a time during the Civil War, Fort Washington was the only defense for the national capital, and it was vitally important, for it controlled movement on the river. Quickly, however, Maj. Gen. John G. Barnard of the Corps of Engineers directed the building of a string of 68 enclosed earthen forts and batteries to protect all approaches to Washington, including nearby Fort Foote. By the end of the war, 20 miles of rifle pits and more than 30 miles of military roads encircled the city. Ultimately, the fort did not see any action during the war, as it was not a factor in any land campaign and the Confederate Navy never attempted to raid the city from the Potomac River.

Fort Washington did service, of one type or another, for each subsequent war, through the end of World War II. In 1946 it was given to the Department of the Interior and became a national park, and many of the newer buildings were torn down, Since that time it has been a public park commemorating the long history of coastal fortifications and serving as a recreational area for history buffs, naturalists, and other park visitors.

I'd taken my kids to it when they were little and impressed with such places. This is a great fort for a kid to explore. There's only one better -- Fort Delaware. Both of those forts have a lot of interesting nooks and crannies to explore, both inside and outside of the fort. The visitors center, located in the yellow house on the hill in front of the fort, provides exhibits describing Fort Washington as the guardian of the Nation's Capital.

While you're there, especially if you visit on a weekend, you're likely to encounter a few re-enactors. However, you can pretty much explore as your whims and will dictate. There are some steep stairs leading down to the lower level of the fort that are quite steep but worth the effort.


Plus, after you explore the fort, take some time to explore the lighthouse and riverfront below. The expansive grounds of the present Fort Washington Park, with its three-mile river trail and river view, are a scenic venue for picnicking, fishing, and outdoor recreation.

Hours: Fort Washington is open year round. The park grounds are open from 8 am - sunset. The historic fort and the visitor center are open from 9 am - 4 pm during winter months and 9 am - 5 pm during the summer months. Admission fees are collected from May through October.

Dogs: Yes! While I was there I noticed several well-behaved pooches touring the fort with their humans. 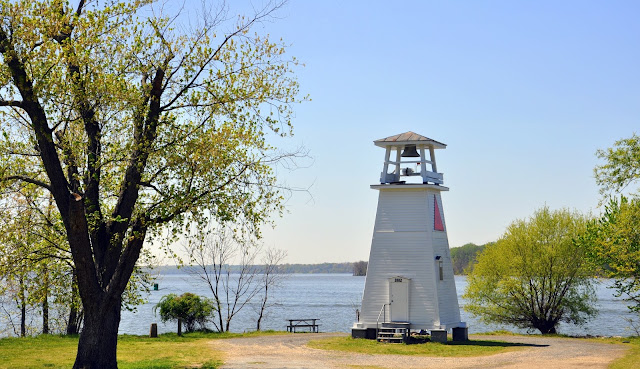