The battle of Antietam, which took place on September 17, 1862, was a pivotal moment in the Civil War. It's worth remembering that it was, and still is, the bloodiest single-day battle in American history. Every year on the first weekend in December, luminaries are placed in the battlefield to memorialize the fallen.

It's almost impossible to wrap your mind around the carnage. 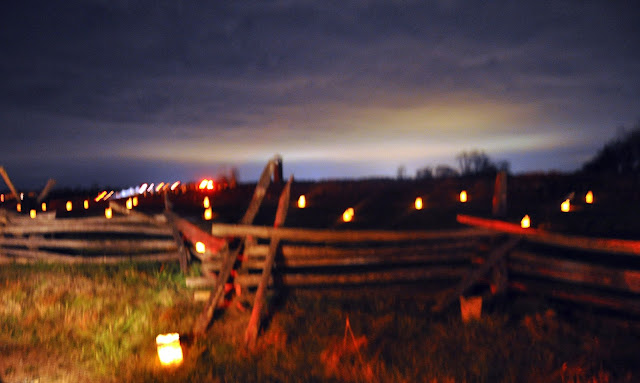 Three phases of horrific fighting at Miller’s Cornfield, the Sunken Road, and the Lower Bridge left 23,110 soldiers killed, wounded, and missing or captured. Approximately 3,650 soldiers were killed outright and approximately 17,300 were wounded. About one in seven soldiers died from their wounds during the Civil War. 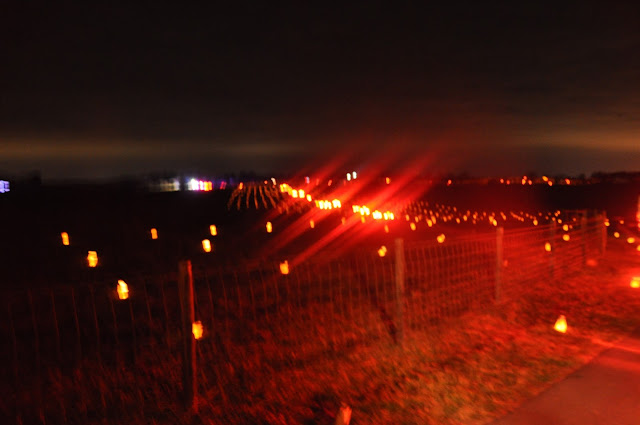 The Illumination is an annual event to remember the fallen, and to illustrate -- illuminate?? -- the number of casualties from that single battle.

Preparation begins weeks before the annual Illumination, when volunteers assemble each individual luminary – a brown paper bag filled with sand to weight it down and a special long-burning candle with an extra-long wick, manufactured by Root Candles in Ohio – and pack them in boxes that are stored until the event. The morning of the event, volunteers gather at the battlefield to get their assigned location for placing the luminaries. More than 1,400 volunteer groups comprised of scouts, church groups, school groups, friends, families and more, go about the task of placing the luminaries on the northern portion of Antietam National Battlefield. 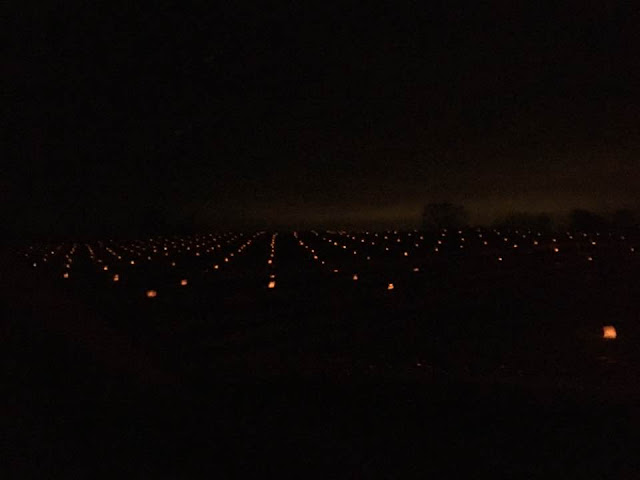 A luminary is placed every 15 feet in designated areas, creating rows upon rows and columns upon columns. Through the years, volunteers have gotten the placement down to a science. Many use long ropes with knots every 15 feet as a guide.

At 3 p.m., volunteers return to their assigned areas and begin lighting the luminaries so that all are lit before sunset.

Last night, as my husband and I drove the 5 miles through the battlefield, we were first struck by the sheer beauty of the luminaries flickering on the fields. But then, we became awed by the grim reality that each luminary represents a father, a son, a husband, uncle, or a brother that fell in the Battle of Antietam. Periodically, re-enactors huddled around camp fires loomed out of the dark, like ghosts walking the fields where they'd fallen.

It's a powerful visual representation of the number 23,110. Just when you think, "that's it, we must be through the tour," another field of luminaries comes into sight, and you feel the impact of the sheer numbers, again and again. 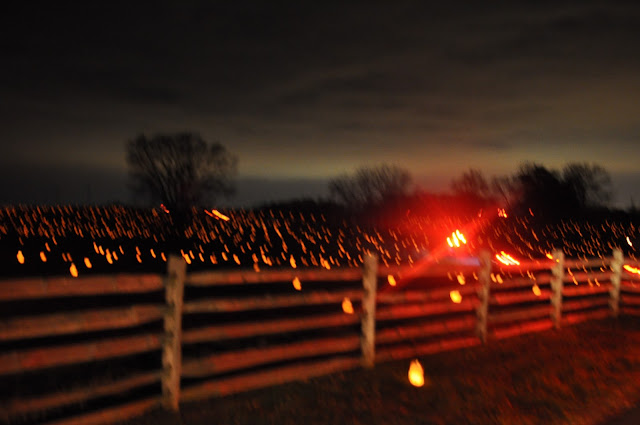 Know before you go: The line of cars sometimes reaches several miles in length and forms on the westbound shoulder of Route 34. In fact, we arrived at 5:50 p.m., and joined the line which was, at that time, 2.5 miles long. We entered the park at just before 8. On our way out, just after 9 p.m., the line was about 2 miles long. So if you have kids in your vehicle, or just for yourselves, expect a long wait and plan accordingly. Bring games and entertainment for yourself.

Other need to know facts:
Getting there: The main entrance to the event is Richardson Avenue off Md Route 34. From Boonsboro, travel west on Rt 34 and a line will form on the westbound shoulder for entrance to the Illumination. From Hagerstown or West Virginia, travel to Sharpsburg and head east on Maryland Rt 34 and make an appropriate turnaround at some point to access the line on the westbound shoulder of Rt 34. To GPS it, pick an address on Main Street in Boonsboro, and let your GPS take you there. Then, from Main Street, turn onto Rt 34, heading west from Boonsboro.

Hours: Visitors are permitted to drive through the battlefield from 6 p.m.-midnight to view the Illumination.