A Spirited Stay at Gettysburg's Most Haunted Address

Ghosts, an overnight in a lovely bed and breakfast inn, Civil War history... what a great idea!!

Disclaimers. Do I believe in ghosts? I don't know, but I'm fascinated by them, so I suppose I do. I love ghost stories and supernatural movies and such. I'm scared to death that I'll encounter a ghost in my home, but I'm happy to go visit one. I believe I've seen a ghost at my work, and as regular readers of this Blog know, I've photographed orbs (Harpers Ferry, Annapolis) and even mists (Shriver House Museum, also in Gettysburg) on my various jaunts. At one location, I photographed orbs in my hotel room and heard a ghostly voice crying "help." I enjoy ghost stories about the places I visit. I never outgrew being scared of the dark, and at my age, I've given up trying.

Farnsworth House is a great location for a ghost hunt. There were multiple deaths in the house and its been continually inhabited for 200 years. John F. McFarlane is the first recorded owner of the home. The wooden structure in the back of the brick house dates to 1810. McFarlane later added the brick portion in 1833; he owned the home until his death in 1851. 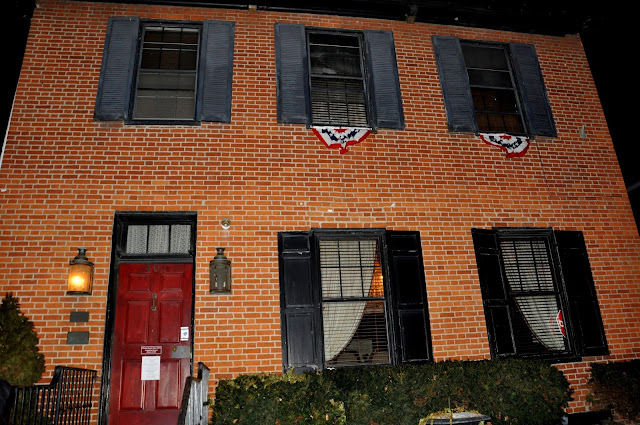 When the Civil War came to Gettysburg, the house was owned by Harvey Sweney (alternate spelling "Sweeney"), who watched Lincoln's procession after the battle. Sweney spent time between Illinois and Gettysburg in the 1860s, and when the Civil War broke out, his sons James and Henry joined Illinois military units. Harvey Sweney, noted for being extremely short tempered, and reportedly abusive to his loved ones, lived in part of the home, renting out the rest of it to Joseph Weikert and his family. So where was the rest of Sweney's family? His wife and daughter Elizabeth lived at the home of Solomon Powers across the street from the Gettysburg Academy Building at the corner or Washington and High Streets.

During the battle, Confederate sharpshooters fired from the safety of its windows in the garret, killing Union soldiers; supposedly one of the sharpshooters accidentally shot Jennie Wade, who became famous for being, tragically, the only Gettysburg civilian who died during the battle. Afterward, wounded United States soldiers were brought into the house, which like many other structures in Gettysburg, served as an erstwhile hospital, and of course, many of those soldiers died on the premises. Harvey Sweney himself died in Illinois on March 27, 1870. 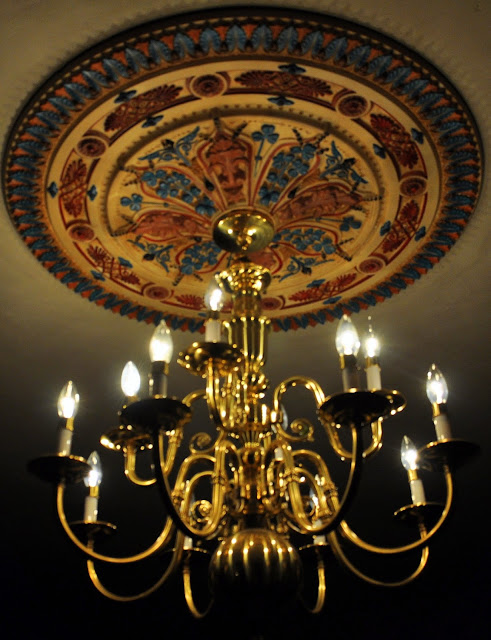 The house passed through the hands of several owners and one of the later owners, the Black family, called it “Sleepy Hollow Inn,” advertising that there were “135” bullet holes in the side of the home.

In 1972, Loring and Jean Shultz purchased Sleepy Hollow Inn -- renamed Farnsworth House Inn in honor of Brigadier General Elon John Farnsworth, who led an ill-fated charge after the failure of Pickett's charge, claiming the lives of Farnsworth and 65 of his men.-- from Sara Black Gideon. The Shultz family claims the inn has been haunted by as many as 16 spirits and that each spirit has its own distinct personality and name. 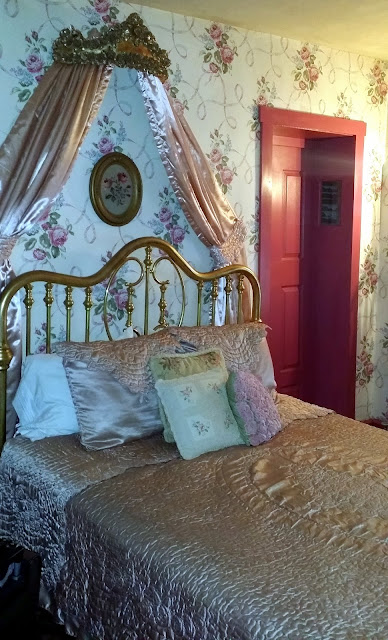 The identity of the ghosts range from an 8 year old boy named Jeremy to a former mid-wife nurse and several soldiers.  Paranormal elements that have been reported are things such as the sound of heavy breathing and the sensation of someone tucking people into bed. The inn has several rooms that are supposed to be hot spots for specific spiritual activity for particular ghosts such as the Sara Black Room, which is supposed to be one of the most active rooms. Thankfully, my friend and I were given the quieter Eisenhower Room, decorated in pink in honor of Mamie.

Before dinner, the group met up, and together decided upon an impromptu visit to nearby Sachs Bridge, which is supposed to be haunted. Although we did not find much, we watched a lovely sun set, and the experience among the small group seemed to establish a friendly tone that lasted throughout the experience.

The dining room, and the room from which we conducted a major portion of our ghost hunt, served as our base of operations. Its antique-filled décor perfectly set the mood for the ghost hunt. A walnut corner cabinet filled with period china graces one corner. Over the fireplace hangs a painting of Gen. George Meade, the Union commanding general at Gettysburg, and a variety of period prints and photographs adorn the walls. A mantel clock ticks away above the fireplace; heavy drapes cover the windows. There is also a bust of Lincoln and a corner secretary, its shelves filled with antique knickknacks, in the entry hall. 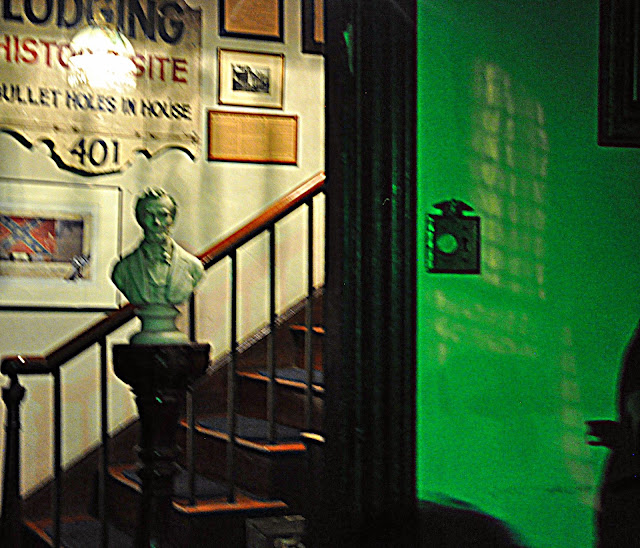 Included in the cost of the ghost hunt were the night's accommodations, dinner, and breakfast. Dinner included a local dish, spoon bread; the inn's famous goober pea (peanut) soup -- the soup had a rich, peanut flavor and was sprinkled with chunks of peanuts; and game pie, which combines pheasant, turkey and duck with mushrooms, in a flaky-crust pie (it is the restaurant's most popular dish). 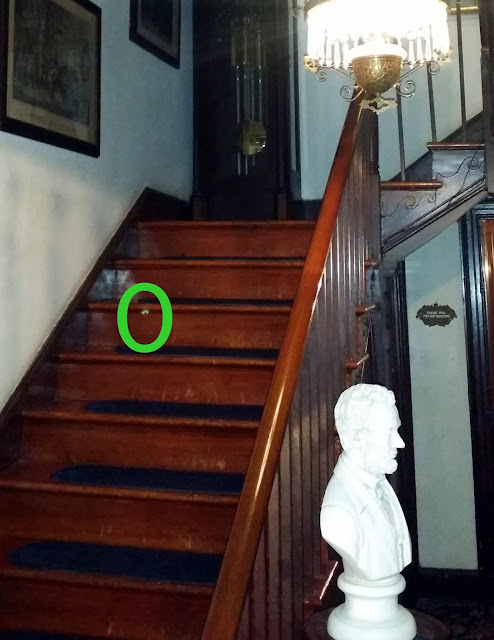 As with most buildings that have survived more than 200 years, the inn's interior has settled into a variety of quirky slants and its floors were creaky. Because it was January and the ghost hunt rented out the entire B&B for the ghost hunt, it was spookily quiet, a hauntingly perfect setting for a ghost hunt.

The ghost hunt began for real after dinner, although as we were checking in and meeting our fellow guests and ghost hunters, I captured an interesting orb by the stairs (but at the same time, debunked the "misty feet" reported to be seen on the stairs -- these are a reflection. We began in the dining room, with an introduction to the tools of the evening: dowsing rods, EMF reader, microphone/recorder for EVPs, motion detectors, and a spirit box, which can channel ghostly voices. Ashley Brennan, of Keystone Paranormal Investigation Association, was our local tour guide and medium. Ashley herself is an interesting individual, an expert in demonology and an experienced investigator into the paranormal.

After the introduction and possible interaction with the spirit of Harvey Sweney himself, we headed out into the cold (it was 22 degrees out and the wind was ablowing) to visit "The Grove," haunted by murderer Steve, and his victim/niece Rachel, as well as Civil War-era soldiers, since it abuts the National Park Service-preserved National Battlefield. 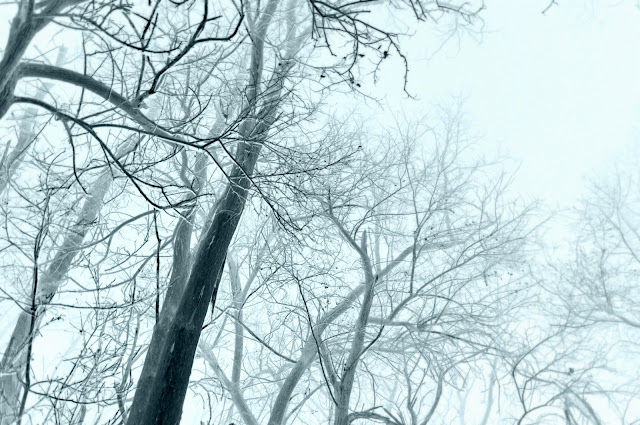 Ashley and Pam Dzbenski recounted how, recently, a pentagram and evidence of Satanic rituals surfaced at The Grove, all of which apparently has introduced a menacing presence(s) to the area. I have to admit, I was really scared out there, as the others talked about invisible footsteps circling us, and presences confronting us from further down the path. Fear is infectious. I didn't "feel" anything, but my hysteria matched my companions', and soon we were hustling out of the woods. But it wasn't just because of the sub-zero wind chill that I was grateful to return back to the warmth and relative safety of Farnsworth House. 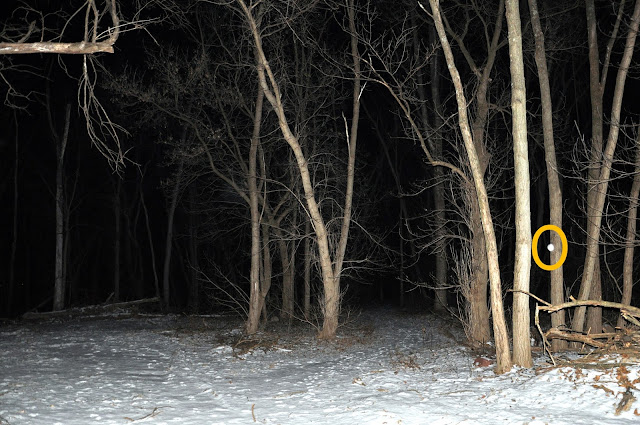 Once back in the Inn, we headed down to the basement, where a motion detector went off for no apparent reason. Minutes earlier, the outside basement door had rustled ominously. Again, it was really frightening, and I was glad as we climbed up the steps to the main floor. But we kept going, and soon we were in the attic, where Confederate sharp shooters aimed their guns at Union soldiers; some died on site, right there in the attic. Through a dowsing rod, we made contact with Jeremy, a little boy, and another unknown presence. As we sat in the dark, the attic door slammed open, scraping across the uneven floor, frightening us. We reclosed it, and a few minutes later, it suddenly opened again. My heart was pounding; I was really scared!

We visited several of the bedrooms, encountering moving cold spots and hearing a couple of knocks and thuds. Throughout the evening, we used the spirit box, but heard very little conclusive ghastly comments from it (although I admit to falling asleep once or twice, and may very well have missed something). By the end of the night, we believed we had made contact with Mary, Harvey, at least one soldier, Jeremy, and possibly even Sara Black Gideon. 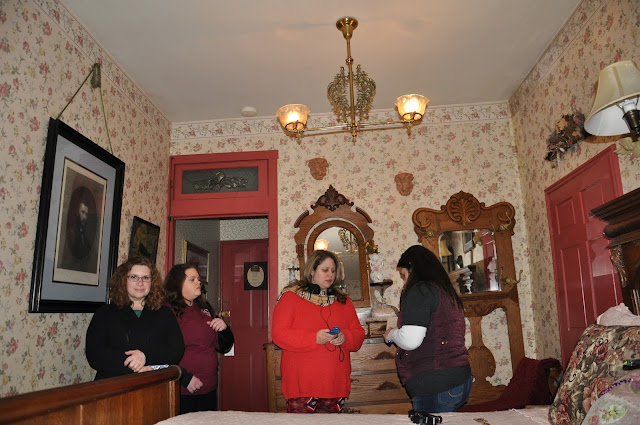 We finally turned into bed at 4 a.m. (by which time I'd been up for a record 24 hours). Although our room with its antique doll was suitably creepy and our minds fully receptive to reaching across the barriers of time and space after all night ghost hunting, our sleep for the remaining hours of the night was like that of the dead, deep and peaceful. 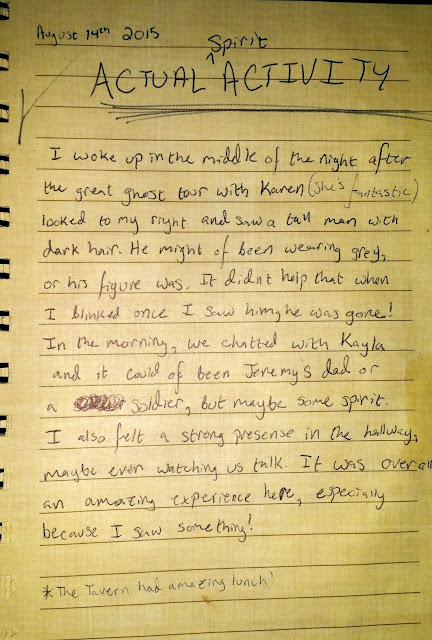 Countless other guests may have heard phantom footsteps on the stairs or above in the attic and other unexplained noises, or felt their shoulder being tapped by unseen hands, or awakened to see the ghost of Mary sitting on their bed, but not us. We shrugged in disappointment and relief, and reminded ourselves that ghosts are not performing seals. They prefer to creep up on you when you are least psychologically prepared, the better to scare the bejesus out of you (else, where's the fun in it?). 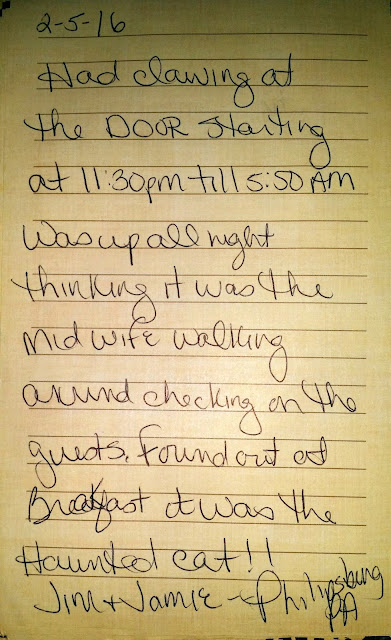 The cool thing about Farnsworth Inn is that it embraces its haunting inhabitants. So if you're in search of a paranormal experience, this is definitely the place to stay! 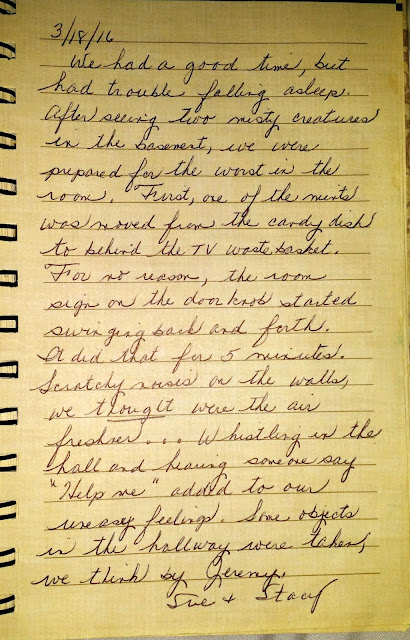 As my friend noted on the way home, attending this ghost hunt was like going to a movie and suspending your disbelief -- only in this case, it's not a 100% disbelief. With memories of the attic door bursting open fresh in our minds, we both agreed that there may be a little truth to the ghost thing. 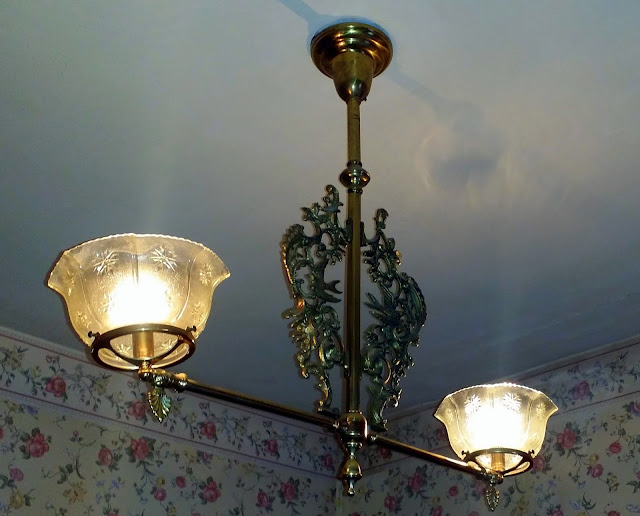 Getting there: 401 Baltimore Street, Gettysburg, PA 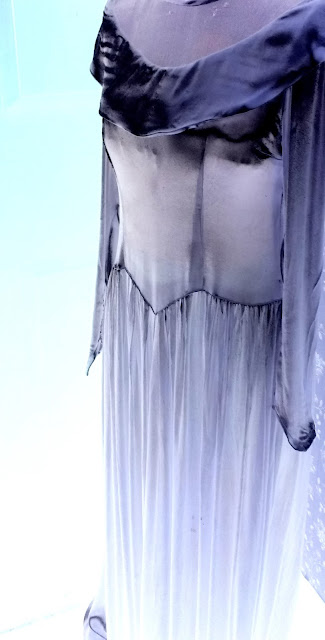