During the midst of winter, one of my favorite activities is to plan my spring bike rides! One of my favorites is the Bridge to Bridge Ride along the Great Allegheny Passage!

A friend and I took advantage of great spring biking weather and rode a short segment of the Great Allegheny Passage (GAP). This was my first ride of the season, so I kept it short, just 10 miles all told. This was my first foray to the GAP, so I wasn't sure what to expect of the trail or the scenery, but it seemed appropriate that I'd introduce myself to the GAP with the "bridge-to-bridge" ride, between two soaring viaducts, just five miles apart.

The access point for this ride is Meyersdale, a few scenic miles away from the Maryland border. We parked at the historic Meyersdale train station, which is also a museum devoted to the Western Maryland Rail Road; there is also a gift shop that sells bike jerseys and t-shirts with the Great Allegheny Passage logo and maps. Once we explored the Meyersville Train Station museum, used the rest rooms and changed into our biking clothes, we were finally ready to start our ride. 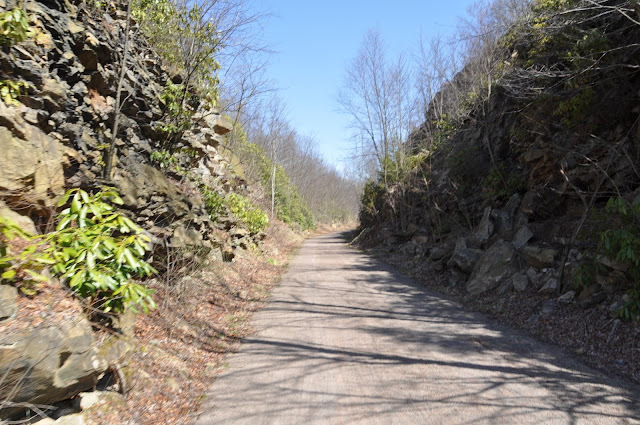 I'd read last winter that if you begin your journey in Meyersdale, in one direction there's a viaduct just 2 miles away, and in the other direction, another viaduct just 3 miles away. Total trip would be an easy 10 miles and I knew I wanted to make this one of the first rides of the season.

I couldn't remember the directions -- did the blurb I'd read recommend going right or left first? Who knew? So we turned right -- it seemed the right thing to do. (I crack myself up.)

First we encountered an ornate Bollman Truss Bridge, which surprised us as it appeared suddenly around a bend, about 1.5 miles (estimated) away from the train station. It was lovely - we've encountered Bollman Bridges before -- there's one in Williamsport along the C&O Canal. This one had been rescued from a nearby road crossing and put in place where it could continue to serve many more years carrying the GAP over a country road below. This Bollman Truss sported an ornate decoration that was a lovely example of Victorian design marrying form with function. You would not see that sort of design on today's truss bridges! 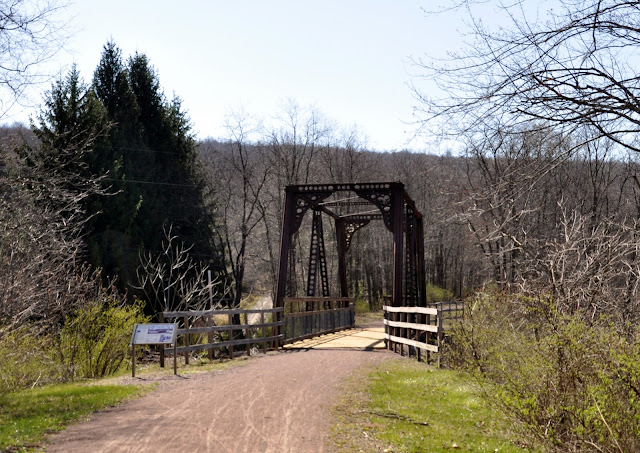 This rare iron truss bridge has an interesting story. Built in 1871, it originally carried the B&O Rail Road over Wills Creek, a few miles east of Meyersdale. In 1910, all 30 tons of it was moved to carry a country road over the B&O Rail Road a few miles WEST of Meyersdale (for a bridge, it's really gotten around), where it served until 2006, when it was slated for demolition. Again it was saved and repurposed to carry the trail over a road, and was placed in its current location.

Wendal Bollman was a pioneer iron bridge builder in America and a self-taught "intuitive" engineer. As a carpenter for the B&O Railroad, he first taught himself how to make wooden railroad bridges. In 1852 he patented his own unique truss form for iron bridges. By 1858 he'd formed his own company, continuing to build iron bridges for the B&O and other railways. Eventually though, steel won out because it could support the heavier loads that the trains began carrying. Eventually, almost all of Bollman's beautiful iron bridges were replaced. Notably, only one of his patented "Bollman truss" bridges survives, the Bollman Truss Railroad Bridge that is near my home, in Savage, MD.

Not long after encountering the Bollman Bridge, we came upon the Keystone Viaduct. Measuring 910 feet, it carries the GAP over a railroad, a country road, and the lovely Flaugherty Creek. We were lucky enough to reach the viaduct while a coal train was still passing beneath it. The view from the viaduct was lovely. 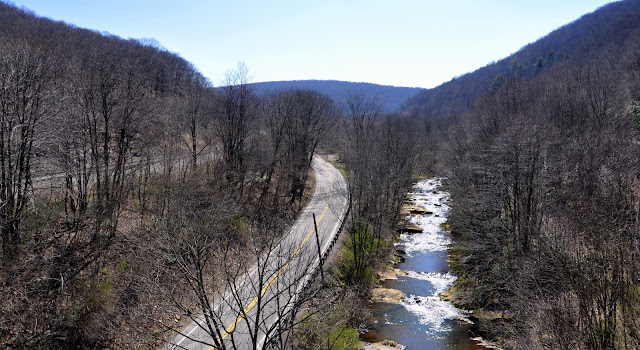 We turned around at the end of the viaduct after riding a little further on the path past a bank of rhododendrons, which will be spectacular in about six weeks from the time of our ride in mid-April! (I'm guessing they'll bloom in late May/June??) Although not steep (it is a rail trail, after all), we pedaled uphill (slightly) from the Meyersdale Train Station to the Keystone Viaduct. The journey back to the train station was noticeably easier. 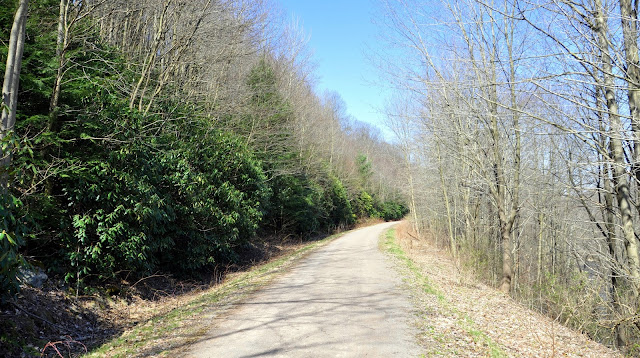 The Great Allegheny Passage travels 150 miles from Point State Park in downtown Pittsburgh to Cumberland, MD, and is the continuation rail trail for the C&O Towpath, which link together in Cumberland. The blog has covered the Western Maryland Rail Trail (WMRT) both east and west of Hancock, and it's no coincidence that this rail trail has links to the Western Maryland Rail Road -- the Wabash system had selected a rail route for both passenger and freight lines that traveled from Cumberland to points West, passing through Meyersdale. In 1910, the Western Maryland Corps of engineers surveyed the route through Meyersdale; subsequently, construction began early July that year.

When we reached the station, we kept going past it. If we'd started by turning left out of the parking lot (and as it turns out, the recommendation I'd read suggested going left first), our first segment would have been a breezy ride downhill -- often coasting -- two miles to the almost 2000-foot long Salisbury Viaduct, which lofts a breath-taking 100 feet above the Casselman River, farmland, and the highway below.

Just beyond the viaduct is an old Meyers-family graveyard -- presumably the Meyers farm was nearby; we wondered whether Meyersdale had gotten its name from this Meyers family. There is a bench in the corner of this peaceful spot -- a good break from the ride to enjoy the scenery or enjoy a picnic -- the Meyers didn't seem like they'd mind the company.

The three-mile ride back to the train station was harder than the first leg from the train station to the Keystone Viaduct, but easily doable, and I believe this is the right order to do this ride: breaking up the uphill portions made it a little more pleasant, especially for those who aren't at their peak fitness. :)

Throughout the ride, we enjoyed the sounds of the countryside -- roosters crowing, the call of a hawk piercing the air, the train whistle as it encountered road crossings. It's very peaceful and a lovely setting for a bikeride. The path itself is packed fine gravel and it there was little debris on the railtrail itself, although property owners adjacent to the trail seem to throw their garbage down the slopes from their properties, making some sections of the trail unsightly. Although we went on a week day, it's my guess that the trail doesn't become as crowded as more urban trails (such as the NCR or C&O Canal Towpath in Maryland).

Know Before You Go 1: There is ample parking at the Meyersdale Train Station, which offers rest rooms, and a small gift shop that also has good trail snacks. You can also pick up a free GAP trail guide and other materials there.

Getting there: 527 Main Street, Meyersdale, PA.