I Like Ike: Exploring the Eisenhower Farm in Gettysburg

"...above all else, a good leader needs integrity--
a deeply ingrained honor, honesty and decency."
-- Dwight D. Eisenhower, 17 October 1961

It was fitting that I traveled on I-70 to get to U.S. 15 to go to Gettysburg to visit the Eisenhower Farm, in Gettysburg, PA. Among Dwight D Eisenhower's many accomplishments as our nation's 34th president was launching the Interstate Highway System. As a dedicated daytripper and frequent user of these roads, I am chronically grateful to him. 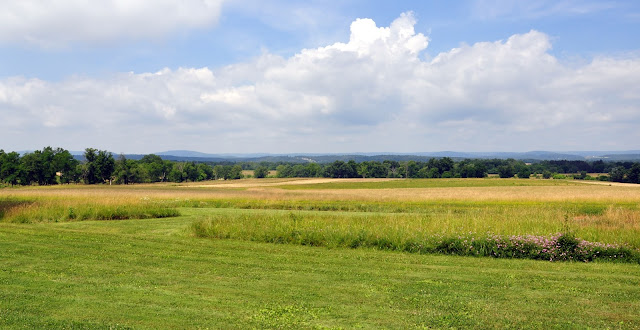 Eisenhower was an American politician who served as President of the United States between 1953 and 1961. He was a five-star general in the U.S. Army during World War II and served as Supreme Commander of the Allied Forces in Europe. He was responsible for planning and supervising the invasion of North Africa in Operation Torch in 1942–43 and the successful invasion of France and Germany in 1944–45 from the Western Front. In 1951, he became the first Supreme Commander of NATO.

Eisenhower's two terms saw considerable economic prosperity. He was voted Gallup's most admired man 12 times, and achieved widespread popular esteem both in and out of office.

In fact, Eisenhower is now deemed to be one of the greatest U.S. Presidents. He was a moderate conservative who continued New Deal agencies and expanded Social Security. He also launched the Defense Advanced Research Projects Agency (DARPA), established strong science education via the National Defense Education Act, and encouraged peaceful use of nuclear power via amendments to the Atomic Energy Act. 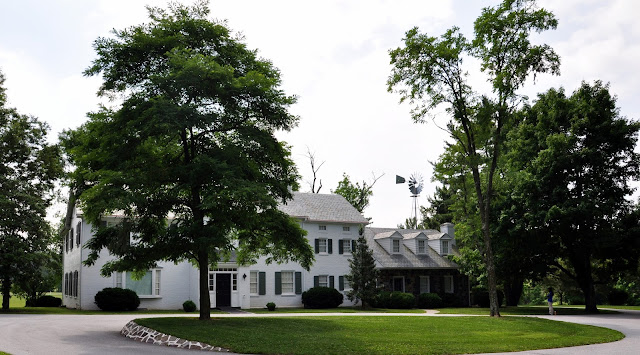 The Eisenhower National Historic Site, adjacent to the Gettysburg Battlefield, was his home and farm, serving as a weekend retreat and a meeting place for world leaders. With its peaceful setting and view of South Mountain, it was a much needed respite from Washington and a backdrop for efforts to reduce Cold War tensions. 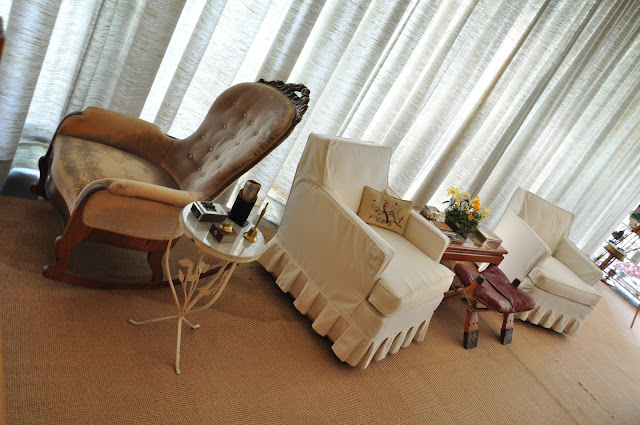 When you tour the home, you get to see every room, from the sun porch where the President entertained world leaders, painted, and watched television to the First Lady's entirely pink bathroom. 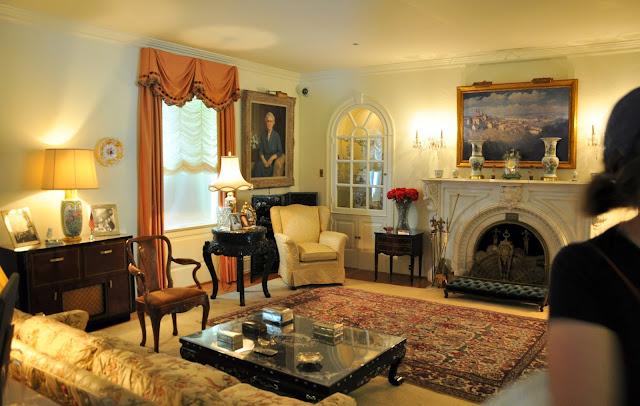 Their formal living room, stunning and elegant, reflects the public stature of the Eisenhowers, showcasing gifts they'd received from heads of state and friends alike. Of note, a silk Tabriz rug from the Shah of Iran, as well as a marble fireplace, removed from the White House in 1873 by President Grant. A man with simpler tastes, Eisenhower considered the room to be "too stuffy."

Touring the house, you feel as if the Eisenhowers just stepped away for a few moments. The rooms are all warm and inviting. Pink was Mamie's favorite color, and most of the rooms are decorated in shades of pink. 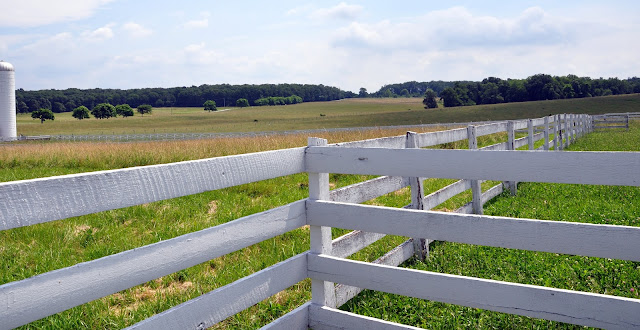 Touring the farm brings to life Eisenhower's devotion to his Black Angus cattle. He maintained a successful cattle enterprise -- aptly named Eisenhower Farms -- for 15 years. His show cattle quickly gained recognition in the Angus-raising community, winning grand championships at the Pennsylvania State Farm Show as well as blue ribbons from major competitions across the United States. Ironically, the day we visited, we saw nary a cow -- they were all in fields away from the house! 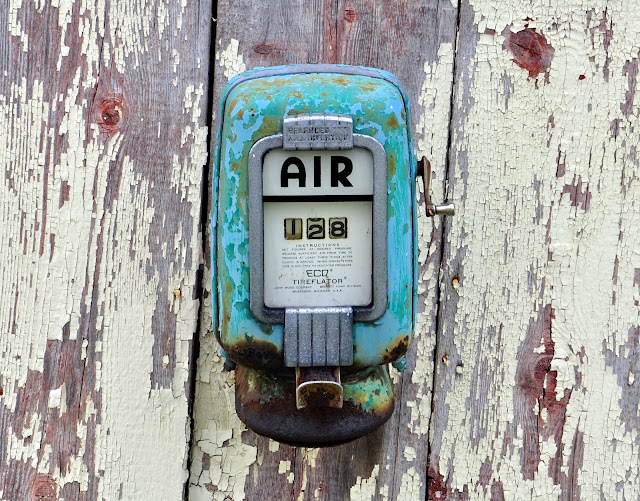 Eisenhower’s association with the town and battlefield of Gettysburg began in spring 1915 when, as a cadet at the US Military Academy at West Point, he visited with his class to study the battle. Three years later during WW I, Capt. Eisenhower found himself back in Gettysburg with his wife Mamie and their first son. Despite his hope for duty overseas, he had been appointed commander of Camp Colt, the US Army Tank Corps Training Center located on the fields of Pickett’s Charge. At war’s end Eisenhower left Gettysburg for new assignments, and it wasn't until after he retired that he returned again. After World War II, while president of Columbia University, the General and his wife returned to Gettysburg to search for a retirement home. In 1950, fondly recalling Camp Colt days, they bought the 189 acre Reddy farm adjoining the Gettysburg Battlefield. 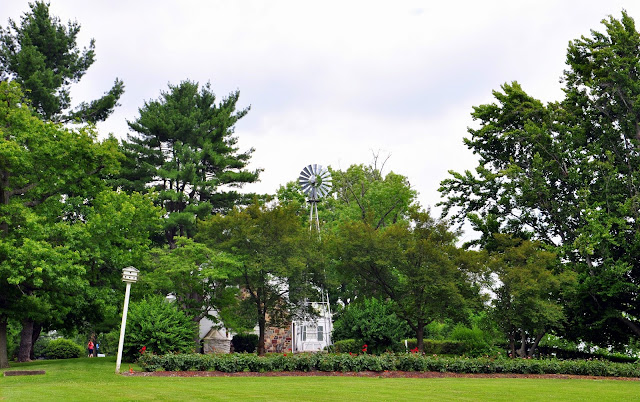 During his first term as President, he and Mamie renovated their Gettysburg home. Much of the original house was not sound and had to be torn down. The construction was complete by March 1955 and the Eisenhowers began to visit on weekends and holidays. In 1961, after 45 years service to their country, General and Mrs. Eisenhower retired to their Gettysburg Farm. For the next eight years the Eisenhowers led an active life.

In 1967 the Eisenhowers donated the Gettysburg farm to the National Park Service. 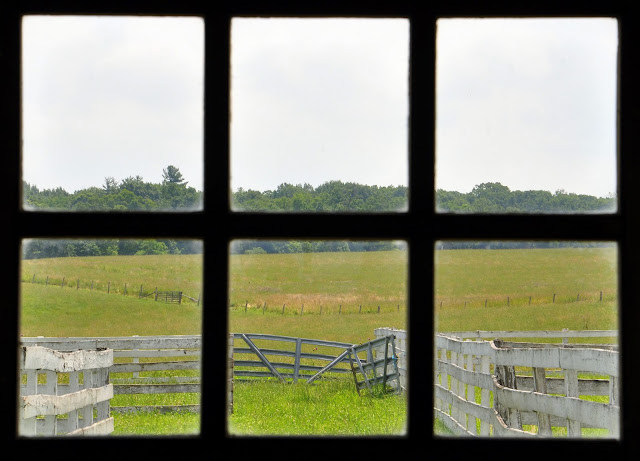 Hours: Shuttle bus departure times from the Gettysburg National Military Park Museum & Visitor Center vary depending on season. 2016 Winter Season: January 1 - March 25; during the winter season there are days that the site is closed or has a delayed opening due to inclement weather. Call 717-334-1124 for the latest information.