For my birthday, my sister gave me a day's hard labor! She purchased two spots in an Open Hearth Cooking Class at Gunston Hall. The class promised participants that they would experience "one of the most fun, rewarding, and exhausting tasks of the 18th century" and they were right! 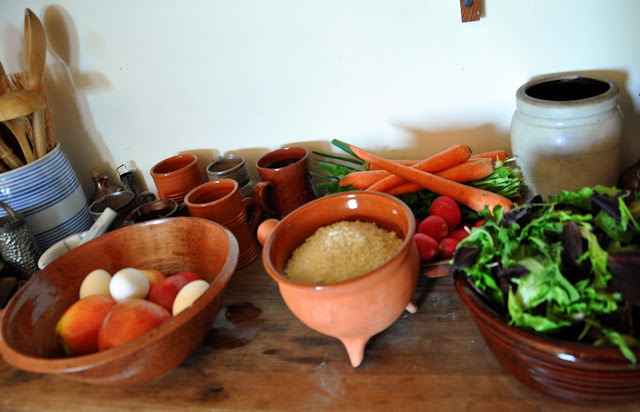 It was a fine October day. The weather was starting to get cooler, and we appreciated the 50 degree weather. We arrived just before 10 a.m. and met a couple there. With four, plus two docents, the kitchen was filled, but roomy enough that we all felt comfortable.

We cooked in an authentic environment, using the dishes and tools of the era. There was no running water, so we carried it from the faucet outside, about 20 feet away, in heavy buckets that weighed more than the water they carried. 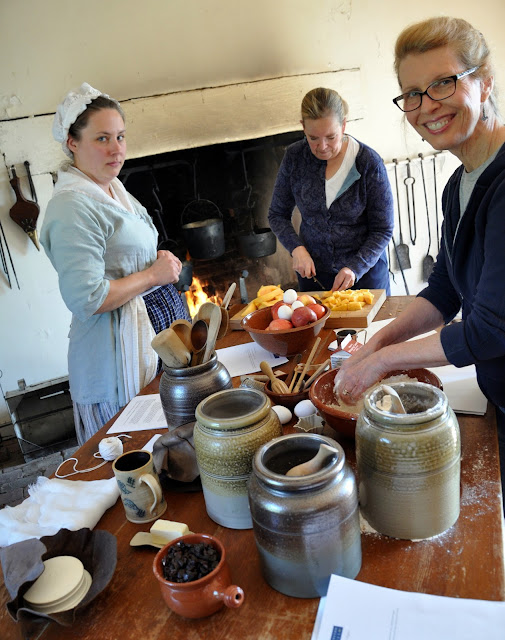 In some ways, it was like learning a new language. We learned new words, such as trencher, a long hollowed out bowl that can be used as a serving pied, bowl, or to knead dough in, or a spider -- not the creepy crawly kind but the three-legged cast iron pan, which sits about a foot high, allowing hot cools and embers to be stacked below. Other words -- pipkin, sounded quaint to our modern day ears. 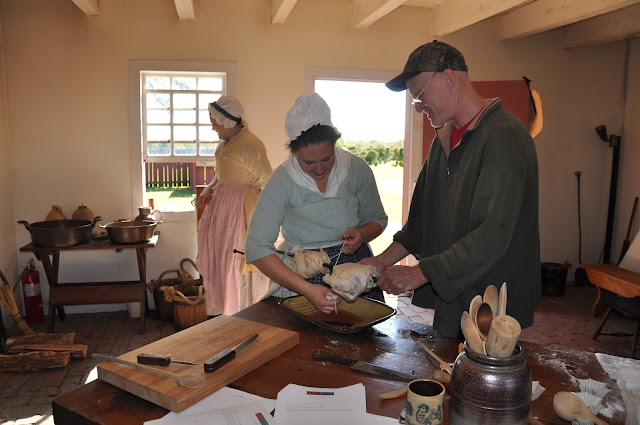 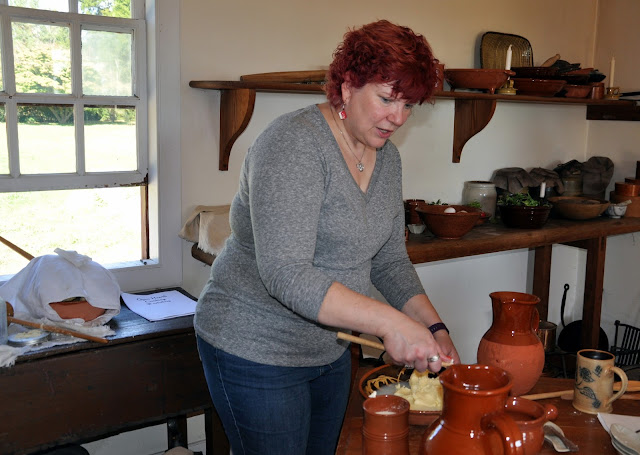 Although we all helped with each other's dishes, we each chose one to make. My first creation was butter -- we started with heavy cream (yes, bought from the store for lack of a cow), and I churned it for an hour. I got impatient: "Is it ready yet?" My arms ached, my shoulders started reminding me they existed. I felt like a little kid on a long drive. "Are we there yet?"

But it was so good, when it was finally ready. 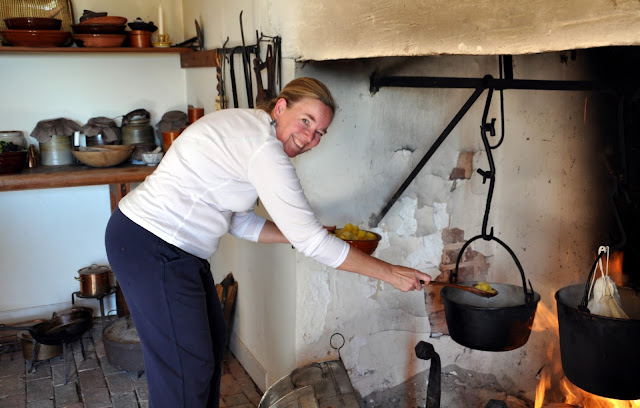 After the butter formed at the bottom of the churn, we emptied out the watery butter milk. In olden times, to keep the butter from going rancid, any remaining milk in it had to be washed away, so I placed the new butter in a shallow bowl and poured fresh cold water over it, and with a wooden spoon, began smooshing it around the bowl. The water grew cloudy, so I poured it off into a pipkin, and added new clean water. Literally, rinse and repeat! Soon the water stayed clear. Then I added salt. And smooshed it into the soft, smooth butter. We tasted it -- oops! Too much salt. And such a simple solution! The docent advised me to wash it out. So I poured on cold water, smooshed it around with the wooden spoon, smooshed and rinsed until the butter was perfect. 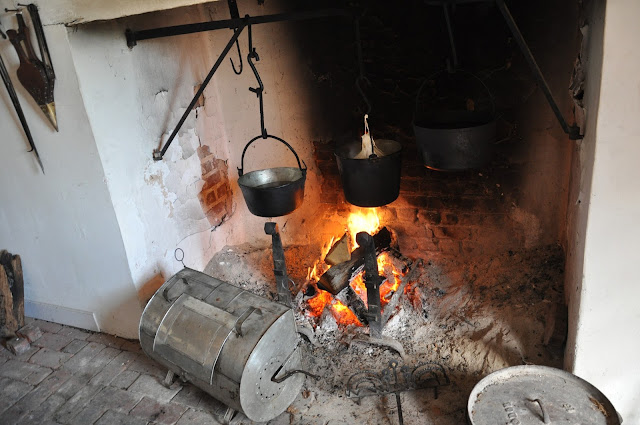 My second chore was to make the sausage and apples.

The recipes we followed were from colonial era cookbooks, such as the Compleat Housewife or an Accomplished Gentlewoman's Companion, The Virginia Housewife, and American Cookery. These cookbooks didn't contain the specifics that our modern day cookbooks offer. Some of the recipes suggest adding "a little salt," "a piece of butter," or a "bundle of thyme." You are directed to "cook until ready." These are frustrating directions for us modern-day cooks, used to carefully (or not) measuring half teaspoonfuls of dried rosemary or roasting meat at 350 degrees for 45 minutes. I mean, we KNOW how long to cook the meat. But cooking over a fire introduces that lack of specificity. 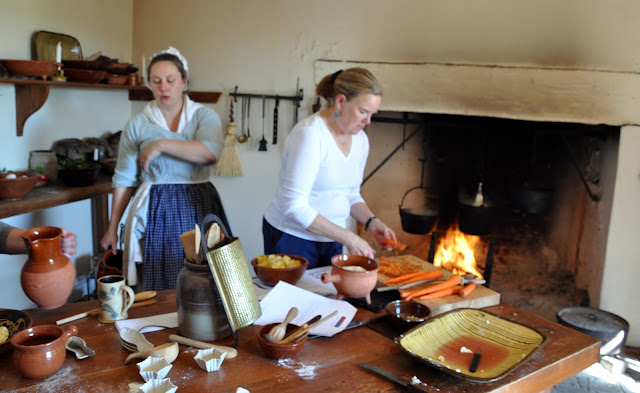 Sometimes the recipes sound so simple -- like the Plumb Pudding. But it was very complicated and took three hours to make!

At the end, we all sat down to the feast, enjoying the food we made in the smoky kitchen. It tasted great -- amazing!

One of the most fun aspects to this cooking adventure was that we were doing all this in the outdoor kitchen, right next to Gunston Hall, on which site meals innumerable had been prepared over the years (although the building itself is a recreation). During the day, sight-seers touring Gunston Hall would stop in, ask questions, smell the good cooking. Although we weren't dressed to period, we felt like part of the exhibit, as they asked questions about what it was like to cook over an open hearth. Although it sounds romantic and quaint, it is hard, back-breaking work.

We left full, but exhausted, after our long day! 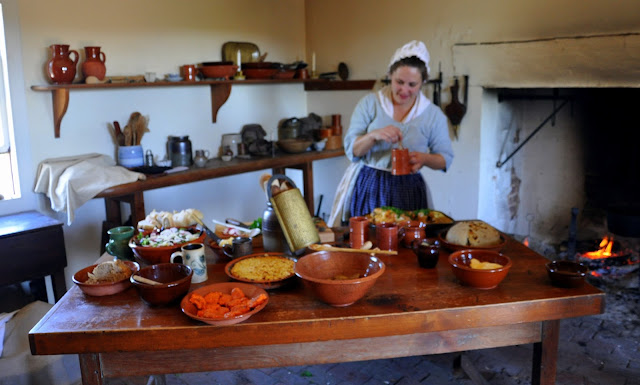 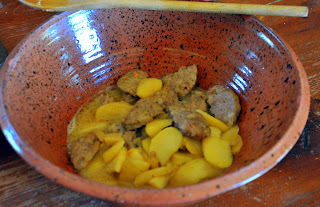 Cut half a dozen fine sound apples, peeled and cored, into moderately thick slices, put them into a pan with half a pound of sausages, and fry them together. The apples will be done by that time the sausages are, and they will be of a fine brown.

Warm a dish, and lay the sausages in the middle, with the apples round them; send up a beacon of gravy thickened with a piece of butter and with a little mustard stirred in among it.

The gravy must not be poured into the dish, for some prefer the sausages dry; but it is a great improvement for those who love it. 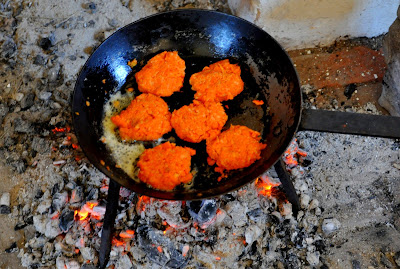 Scrape and then boil your parsnips or carrots; then mash them, and to a pint of pulp, grate the crumb of a penny loaf, with eggs, nutmeg, orange-flour water, and sugar to your taste. Mix all up with a little sack and cream and fry them in a fine suet, which must be hot when you put them in your pan; a spoonful of each puff in place. 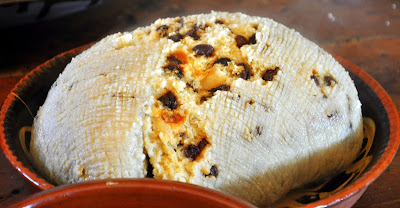 Three pints flour, a little salt, six eggs, one pound plumbs (we used raisins -- any dried fruit would work), half pound beef suet, half pound sugar, one pint milk; mix the whole together; put it into a strong cloth floured, boil three hours, serve with a sweet sauce. 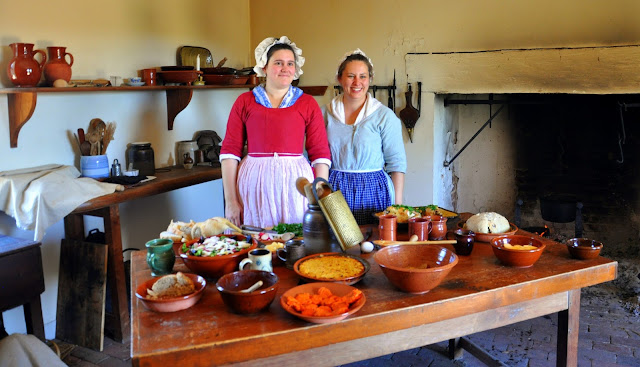 Know before you go: wear clothes made from natural fibers, such as linen, silk, cotton, or wool. Synthetic material can melt and cause severe burns. Ensure you wear closed-toe shoes.

When: Gunston Hall holds the Open Hearth Cooking Classes on one weekend in October and in April.

Do you love to day trip? Share this blog with your family and friends on FB -- here's the link: www.MidAtlanticDayTrips.com 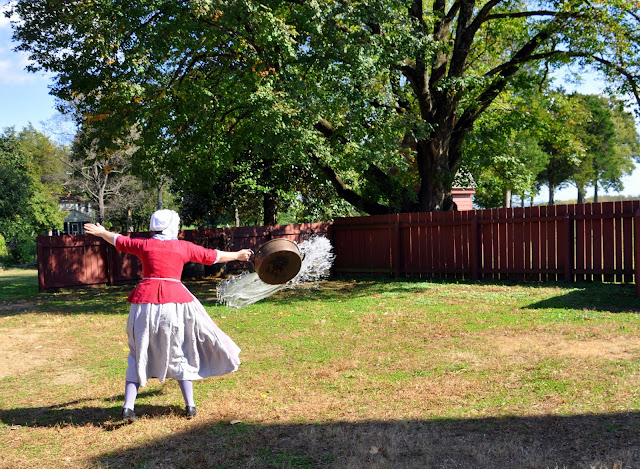