Check-out the Bike Trail along the Chesapeake and Delaware Canal

The trail begins in Delaware City at Battery Park and follows the Delaware City Branch Canal south to the C&D Canal. Delaware City is a charming riverfront town of 1,695 (Wikipedia) with an historic district that dates from 1826 to 1930. The town is surrounded by Delaware Estuary marshes, and is the gateway to Fort DuPont and Fort Delaware. 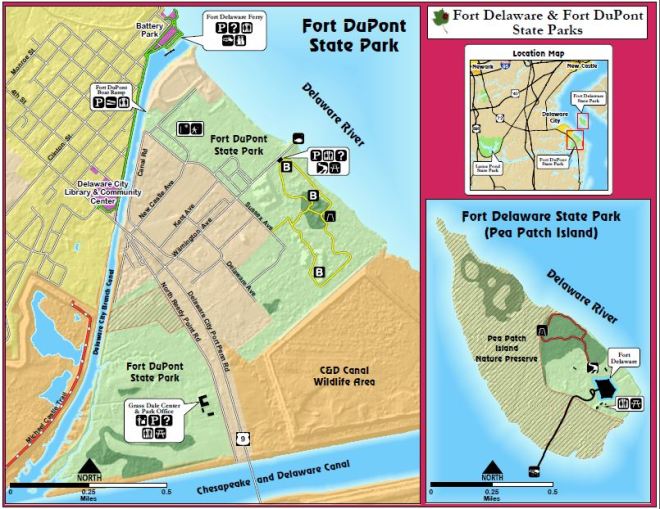 Named for Rear Admiral Samuel Francis du Pont, the Fort was actively used as a military base from the Civil War through World War II. Fort Delaware was critical in defending the Delaware Valley during the Civil War. The fortress also saw duty during the Spanish American War, where she was the key in a ‘Three Fort’ defense made up of Fort Delaware, Fort DuPont and Fort Mott (NJ). Fort Delaware was active until WWII, and her guns were never challenged. Following World War II, the Fort was turned over to the State of Delaware. Portions of the land were dedicated as a state park in 1992.

Fort Delaware, the Union fortress dating back to 1859, once housed Confederate prisoners of war. It was originally built to protect the ports of Wilmington and Philadelphia. Visitors take a ½ -mile ferry ride from Delaware City to Pea Patch Island. A jitney provides transport from the island dock to the granite and brick fortress. Here, costumed interpreters take you back to the summer of 1864. 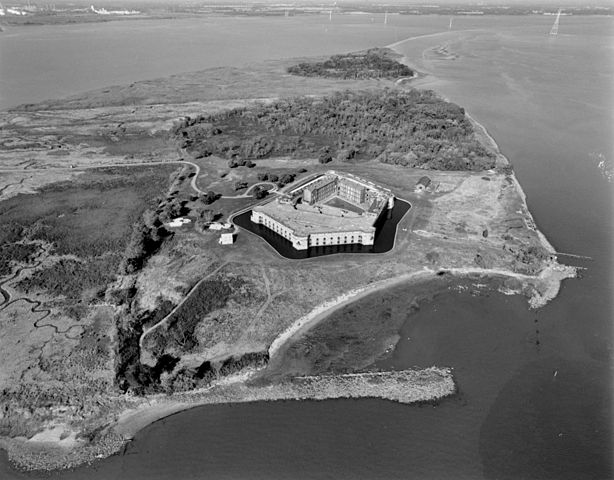 Cathy and I biked about 14 miles round trip from Delaware City to Summit Point Marina at the center of the map just south of Lums Pond State Park. The Chesapeake and Delaware Canal is a deep ship canal -- some 450-foot wide and 35-foot deep, owned and operated by the U.S. Army Corps of Engineers.

“Today’s canal is a modern sea-level, electronically controlled commercial waterway, carrying 40 percent of all ship traffic in and out of the Port of Baltimore. Cargo ships of all sizes, tankers, container-carrying vessels, barges accompanied by tugboats, and countless recreational boats create a steady flow of traffic.” (Wikipedia)

Tugboat and barge on the C&D Canal (by Cathy Schwarz).

The town has many restored historic homes, shops and galleries, featuring hand-painted originals and prints, antiques, collectibles, clothing, gifts and crafts. Additional sights include the Canal Museum, art galleries, summer concerts, boat tours, and tours of the nearby horse country. There are also many fine restaurants, bed and breakfasts, and transient/seasonal boat dockage availability. Chesapeake City’s Victorian charm has been featured in several national magazines, including Travel & Leisure, Coastal Living and Southern Living. 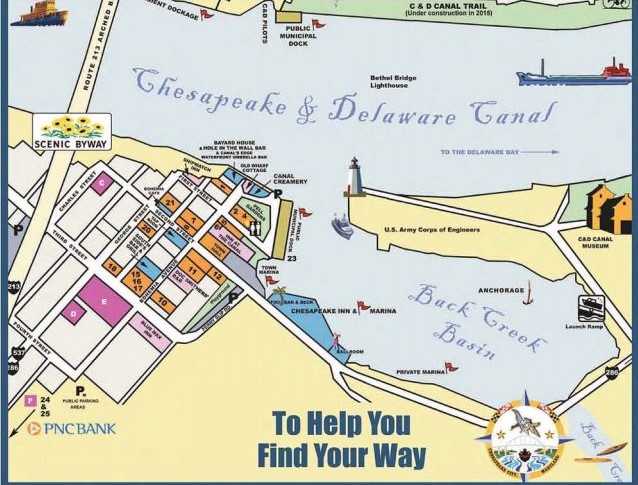 The End of the Day

Cathy and I didn’t bike as far as Chesapeake City. Instead we returned to Delaware City and had drinks and a great seafood restaurant at Crabby Dick’s, overlooking the Delaware River. A steel band played by the outdoor bar.

All in all, this section of Maryland /Delaware has a lot to offer. We plan to return there soon to explore the forts.


Nicknamed “The Professor” by his colleagues, Harry is a native Marylander who moved to Columbia in 2001. Harry’s wife, Cathy, is a Columbia acupuncturist and the family includes two college-age children, a dog and a cat. Harry is a partner with Bearsolutions LLC, helping charter school authorizers provide effective financial oversight. For more blog posts by Harry Schwarz, go to https://hocomd.cc/.


For other day trip destinations, go to the Blog's Find a Great Place to Day Trip.