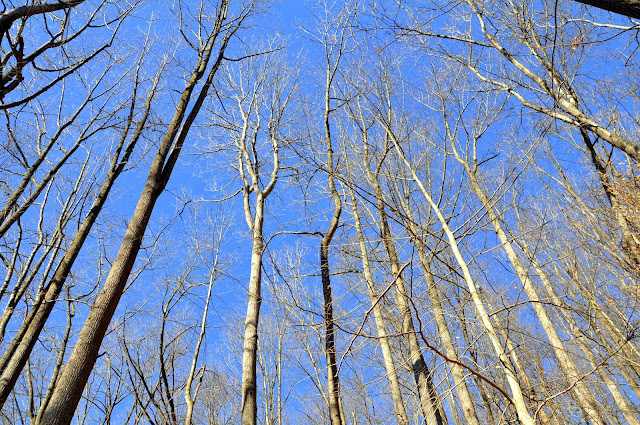 Although spring is in the air, the early March day still promised cool temperatures. The leaves were not out yet, and a recent rain had left the ground a little muddy. Still, the temptation to go on a hike -- to do something -- ANYTHING -- outside, was too much. A hiking we would go!

I had read about the King and Queen Seat a couple of years ago, and had added the hike to my ever-growing list of places I want to go see and things to do. The King and Queen Seat -- a dramatic rock outcropping with sheer drops of 190 feet on three sides is the 3.6 mile hike's payoff. At just under an hour north of Baltimore, it's fairly easy to get to, and on the way, once you pass Bel Air, you get to drive through some lovely Maryland countryside.

The rock outcropping is believed to be a traditional meeting place for two tribes of Native Americans: the Susquehannock and the Mingo. This belief is disputed, however. A book published in 1880 is the first mention of this area being used for ceremonial purposes by Native Americans, and it's entirely possible the author made up the story to make the area more interesting -- as if it needs any marketing! More recently, an archaeological investigation by the Maryland State Highway Administration begun in 2005 failed to find evidence that the site had significance as a “traditional cultural property.” That said, it's something that aught to be significant, right? 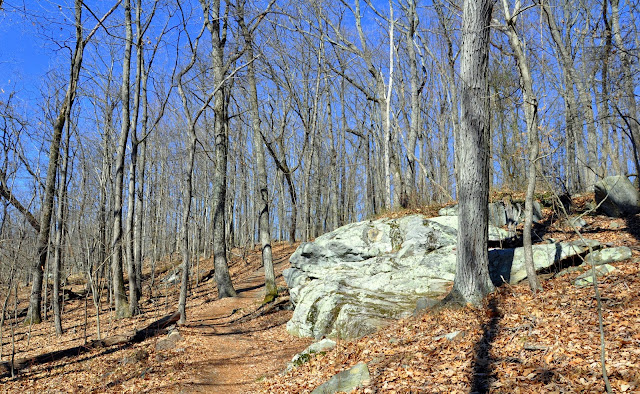 It's a strenuous hike -- you go up and down and then back up the side of a mountain, During the first 900 feet, you gain 200 feet in elevation. But after walking briefly along the ridge, you head back down the other side of the mountain, amidst a grove of mountain laurel that must look really lovely in late spring when they bloom and the ferns are leafed out. Between the two hikes that day, my fitbit claims I climbed 76 flights of stairs -- and the second hike was almost flat. 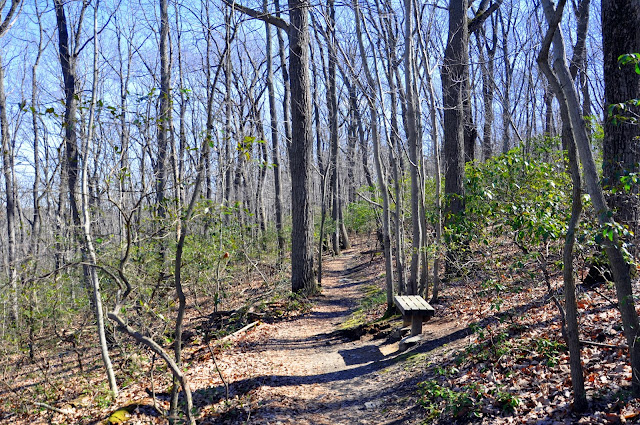 After a brief decent in a series of switchbacks in possibly the prettiest part of the hike due to the moss and lichen covered rocks and the mountain laurel, which in early spring offered the only hint of green, the trail crosses a park road and then gradually heads back up the side of the mountain. 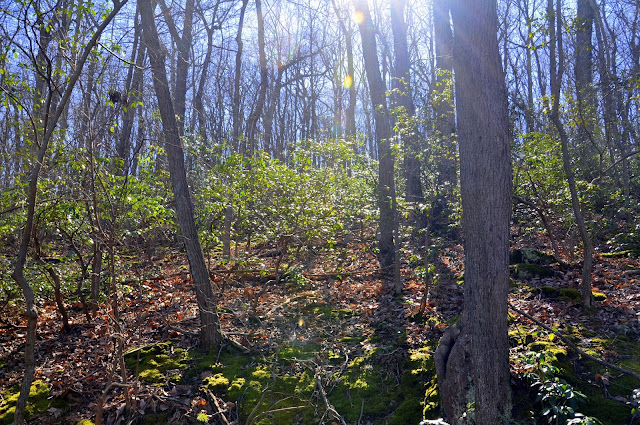 About half-way up, you'll encounter a rock outcropping that is sort of split in the middle; moving to the edge of it, you get a nice view of Deer Creek below. Doofus that I am, I thought, "oh, his and hers. This is it -- the King and Queen's Seat." I was a little disappointed. (No, it's not. It's just an interesting rock outcropping.) Luckily, we kept moving, and finally came upon the real King and Queen's Seat. 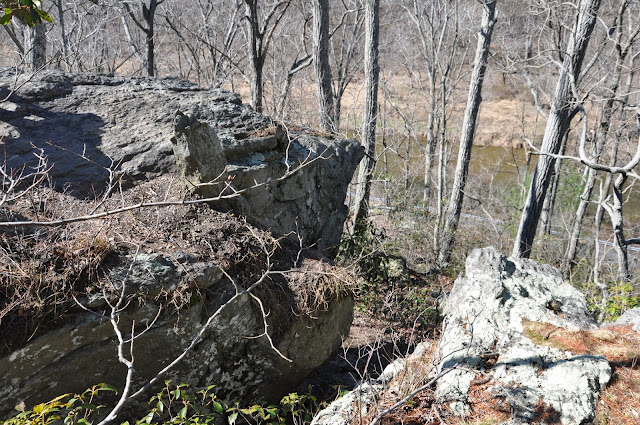 The trail curls around the side of the ridge, moving away from the edge and again you encounter a dramatic elevation gain. We were huffing and puffing. Eventually we caught sight of the magnificent King and Queen's Seat rock outcropping. There's no mistaking this -- the rocks stacked upon themselves in interesting formations. This was well worth the strenuous but lovely 3.6 mile hike. Inching out to the edge, a panorama of the surrounding countryside and rolling hills and farmland of northern Harford County unfolds, with Deer Creek running almost immediately below. Stunning in early spring, once the leaves are on the trees, it must be spectacular. 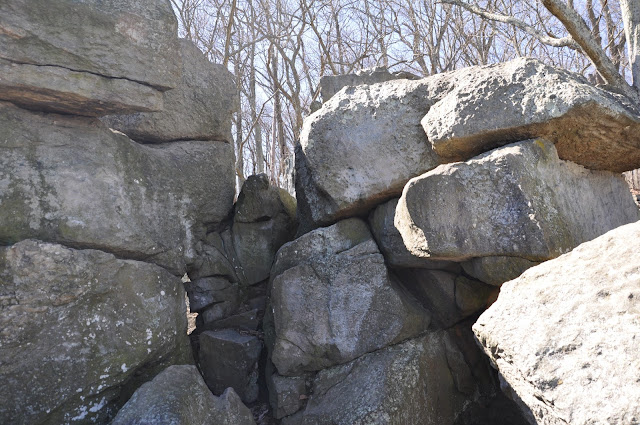 Interestingly, carving one's names and the year seems to be a tradition here, although honestly, I frown upon the more modern inscriptions, but some of them date back to the mid to late 1800s, and so the graffiti suddenly becomes quite cool! Gotta give a call-out to Eldridge, who loves Esther, since 1877.

Sadly, I noted that previous hikers had left behind fast food sauce containers, cigarette butts, and a few plastic bottles. Sad to see when the park even provides hikers with biodegradable bags so they can cart out their own trash. Also sad, there have been a number of deaths at the rock outcropping. So enjoy climbing around the rocks, but be extremely careful. 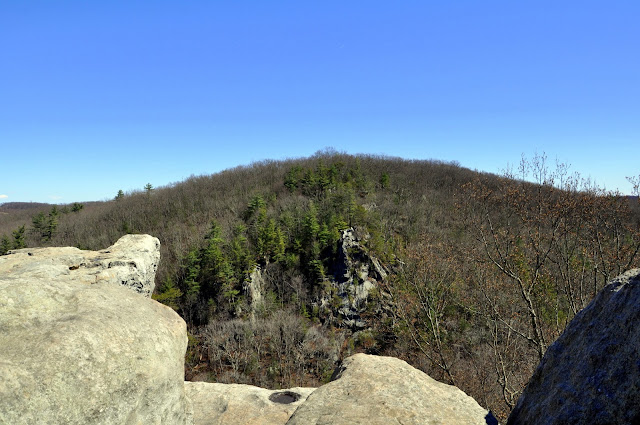 Finally, we turned around, and began heading down the trail. Although the trail was well marked with white blazes, keep an eye out for the square trail signs. The sign pointed us back to where we'd parked our vehicle, next to the park offices. The decent was steep in a few places but otherwise went quickly. 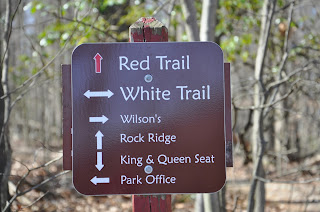 Despite being tired from the strenuous hike to see the King and Queen's Seat, we decided to finish the day with the easy, 1.1 mile there and back trail to see the Kilgore Falls -- the second tallest waterfall in Maryland. This meant a short, 5-minute drive to a different section of the state park.

This trail was surprisingly well populated for a weekday. The trail offers views of a pleasant meadow paralleling the Falling Branch of Deer Creek. Along the way, we encountered ruins, labeled on different websites as a stage coach stop or a the ruins of a mill; interestingly enough, although "substantial ruins" are mentioned several times by different guides as being on the opposite side of the creek, there they were, within 15 feet of the trail. Shortly after seeing the ruins, you reach the falls within 10 minutes. 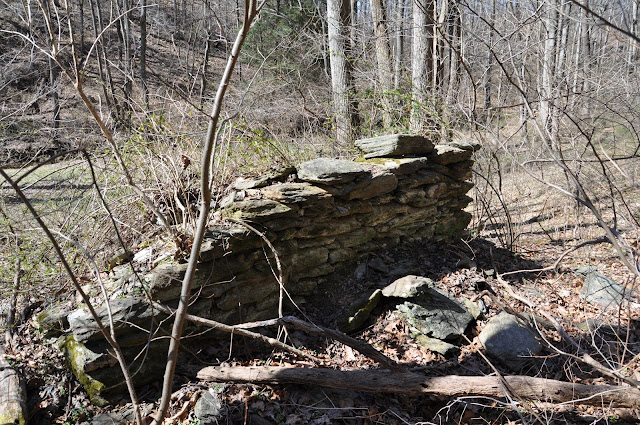 Once you come within hearing of the falls, you have to cross Deer Creek via stepping stones which brings out the kid in you. Even with recent rain, all the stones were exposed, and only one wobbled a bit precariously. The trail leads you into a natural horseshoe of steep rock walls, overwhich tumbles Kilgore Falls. 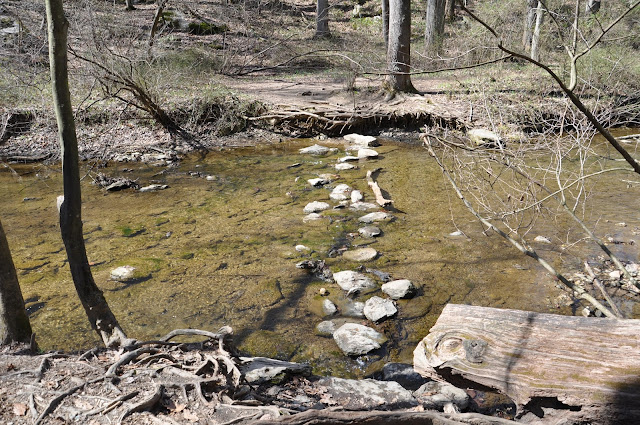 In warmer weather, I imagine the pool below the falls would entice a number of folks to wade in and splash around. 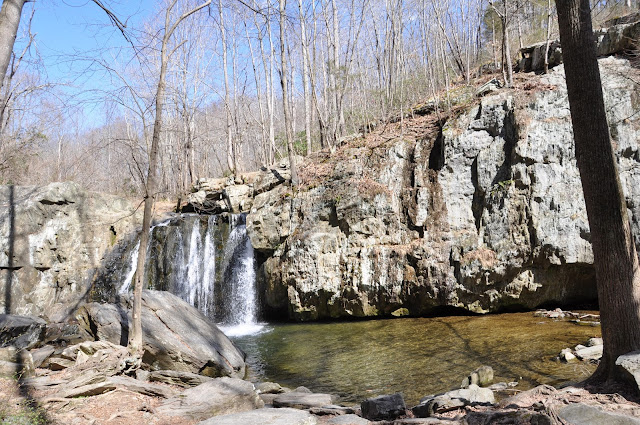 Two important points are worth noting: the park's website doesn't do this park and these two hikes justice. And, movie goers should note that both the King and Queen's Seat rock outcropping and Kilgore Falls appeared in the movie, "Tuck Everlasting." 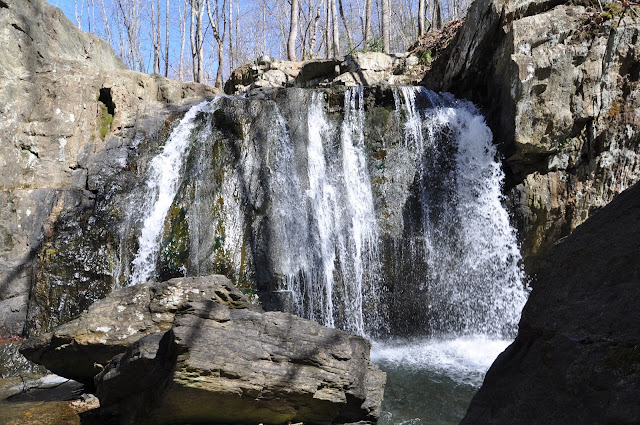 Know before you go #1: Even on a week day (albeit a gorgeous one) in early March, there was no solitude at the King and Queen's Seat or Kilgore Falls, although the rest of the Ridge Hike we walked alone. The park is a popular one, frequently fills to capacity on summer weekends and holidays, so plan ahead, go early to ensure both that you find parking and can get in; once the picnic areas are at capacity, the park is closed to additional visitors.

Know before you go #2: Wear appropriate clothing. Although the trails in summer are well shaded, you may still want to take usual sun precautions. Hiking boots are a must, as the trail can be steep and rocky in places. Even in early March in Kilgore Falls, we spotted an intrepid black snake out sunning itself, so even on the easier Kilgore Falls trail, think snakes and wear appropriate footwear. Finally, I noted that some trees, not immediately adjacent to the trail, had what I thought were poison ivy vines growing up them, but park rangers indicated were poison oak.

Know before you go #3: If you're not up to the full 3.6 miles Ridge Trail loop, you can take a short but steep trail directly to the King and Queen's Seat from the parking lot in front of the park office. In addition, there is another parking location, directly off of MD Rt 24, that leads you up to the rock outcropping, but that means you miss the loveliness and adventure of the rest of the loop.

Know before you go #4: Are you planning to visit Kilgore Falls at the Falling Branch area of Rocks State Park in Harford County this summer? Starting June 29 2019, reservations and a free parking permit will be required for summer weekends and holidays to properly manage traffic at this popular site. So, what perks come with this new reservation system?
Maryland State Parks will begin accepting reservations on June 24. Call 410-557-7994 Monday - Friday, 8:00 a.m. - noon.

Getting there: To the park office and access to the Ridge Trail Loop, 3318 Rocks Chrome Hill Rd, Jarrettsville, MD 21084; for the parking lot for the Kilgore Trail, 1026 Falling Branch Rd, Pylesville, MD 21132. 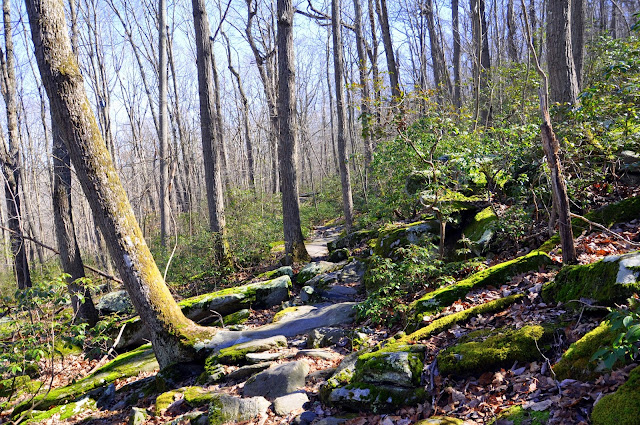