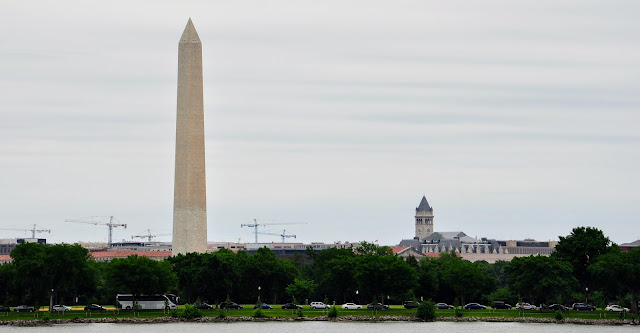 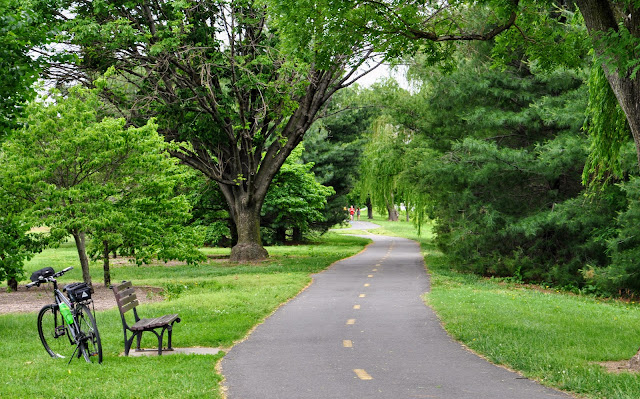 Its paved surface was what enticed me, after several days of heavy rains, I worried that gravel trails would be too muddy for a good ride. Plus, I've been wanting to start exploring this trail -- one plan is to pick up the Woodrow Wilson Trail in Maryland, connecting to the Mount Vernon Trail and head south to Mount Vernon. For this day's ride, however, as I tried to figure out the best place to park, I got frustrated. There was little specific information.

But the lure of outstanding, sweeping views of the majestic Potomac River and the patriotic monuments in DC pushed me past this frustration. The Mount Vernon Trail winds alongside the Potomac River offering uninterrupted views of Washington, D.C.'s skyline. I determined that my best choice  -- and most likely place to find available parking -- was the LBJ Memorial Grove. Turns out there was also plenty of spots open at Roosevelt Island as well.

I decided on a relatively short ride of approximately 15 miles. Starting at the LBJ Memorial Grove, I decided to ride north to Roosevelt Island, then turn around and head back down to Alexandria, finally returning to my car. My ride got cut short because it started raining, and with my camera hanging around my neck, I didn't want to risk it getting damaged (and no, I didn't have the proper bike camera bag with me -- lack of foresight); thus at Reagan National Airport I turned around and headed back. My ride turned out to be 10 miles, almost on the nose. I'm not sure what the elevation gain was, but the hills were small, usually to accommodate over- or under-passes for the highways and bridges, and going back down them after a brief exertion made me feel happy.

I really liked the northern part of this ride -- the three miles above the Sailors and Marines Memorial, near the LBJ Memorial Grove, which offered sweeping views of the Potomac, lovely mature trees lining the trail, and relatively little close proximity to the highway (although it was always within hearing distance, it usually wasn't within a few feet). Here, the honeysuckle grows euphorically, and the aroma of the honeysuckle engulfs the trail. 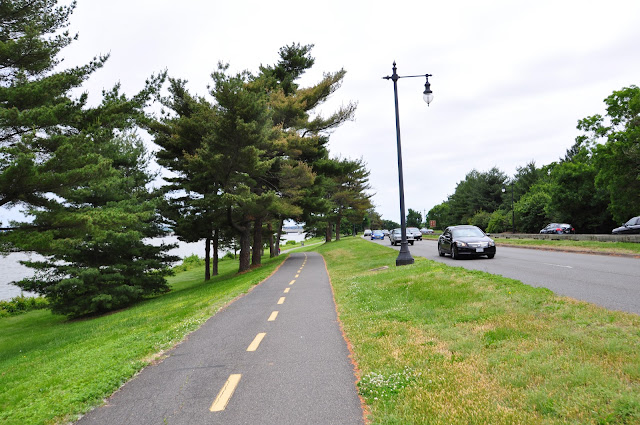 The Mount Vernon Trail, as with most urban trails, is exceptionally crowded, and it's a fairly narrow trail. Even on a Sunday afternoon, I noticed several bikers with brief cases strapped around their backs, on their way to or from a weekend afternoon in the office. There were runners, dog walkers, families walking with strollers and toddlers, seriously kitted out speed-demon road bikers, and even a girl spinning cartwheels. This is a crazy mix, and it can seem like a squirrel circus on the trail, as faster bikers pass the casual bikers, dog walkers, families, and runners. To my shame, going up one of the larger of the small hills, a runner passed me... 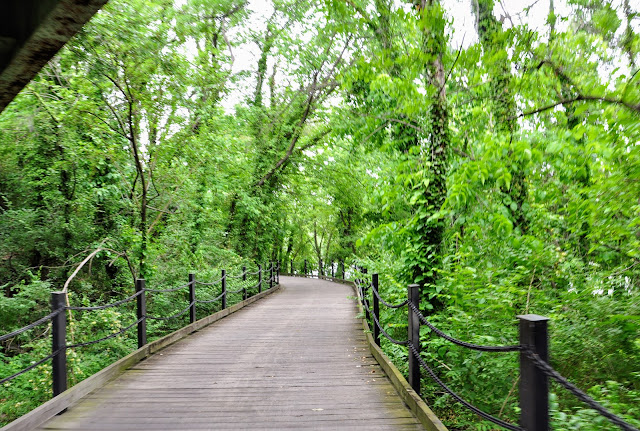 About a mile before Roosevelt Island, the trail became magical. The trees closed in, the highway receded a bit -- the only downside was the board walk that now formed the trail surface was jarring, a minor irritation given how enjoyable the trail was at this point. It was a tunnel of green. If only every trail could have sections that looked like this. The trail winds beneath multiple highway and Metro overpasses, adding to the mystical, cave-like quality to this brief segment. 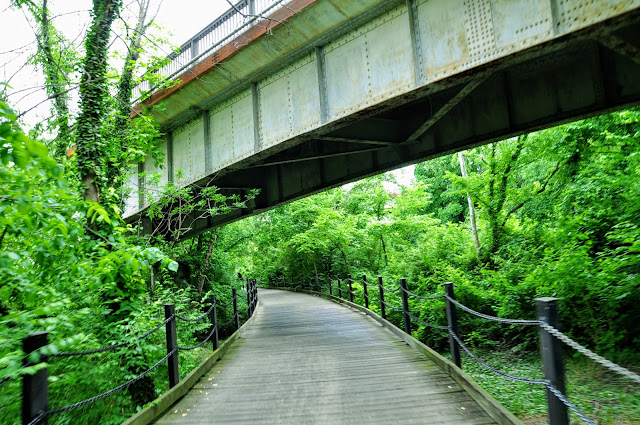 At Roosevelt Island I turned around, going back the way I came. Just past the Navy and Marine Memorial, where I'd initially joined the trail, there's a lovely wooded grove, but that yields to the more open ball fields and lawn at the Gravelly Point Park, just north of the airport. The section past the airport runs right along the highway but then veers into several overpasses that offer some nice views of the airport buildings. 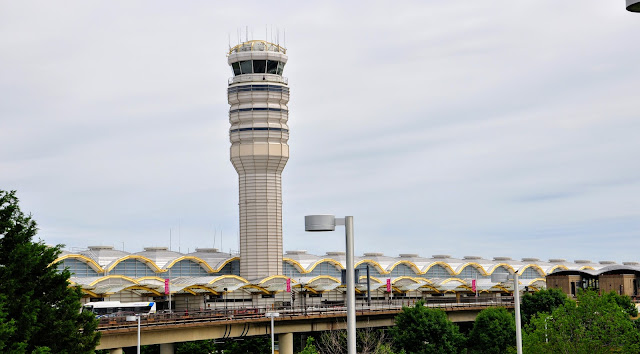 All in all, this trail is a nice way to experience the various monuments and famous landmarks -- the Kennedy Center, Jefferson Memorial, Lincoln Memorial, the Washington Monument -- from a distance. Despite the proximity of the highway, the extensive greenery and the lovely vistas of the Potomac River make this trail an urban oasis you shouldn't miss! I'm looking forward to continuing my exploration of this trail below the airport and the rest of the way to Mount Vernon.

Know before you go 1: Good parking places include Roosevelt Island, the LBJ Memorial Grove, Columbia Island Marina, and Gravelly Point Park (which is also excellent for airplane viewing although that gets really busy because it also offer has busy ball fields). The Mount Vernon Trail is a short ride or walk from the Arlington Cemetery, Ronald Reagan Washington National Airport, and Rosslyn Metro stations. During rush hour, bikes are not allowed on the Metro, so check the Metro web site for more specific information about taking your bike on the Metro. 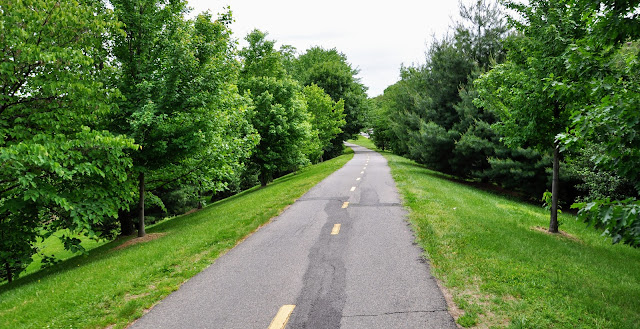 Know before you go 2: If you decide to park at the LBJ Memorial Grove, there are two parking lots -- one accessible from southbound George Washington (GW) Parkway, near the Pentagon, from the parkway, just following the signs; the other is accessible from northbound GW Parkway. If you park near the Pentagon, take the bridge over to the memorial grove, veering right off the more formal slate path to the concrete/gravel path. Enter the parking lot and head south, straight to the end, where you'll find a sign indicating the Mount Vernon Trail access, through a highway underpass.

Know before you go 3: If it's a sunny or partly sunny day, wear sun block, as most of the trail is unshaded. It will also be hot, given the proximity of the highway and the lack of shade. Although initially I'd been disappointed that it was a cloudy, and then rainy day, I think it was a blessing in disguise.