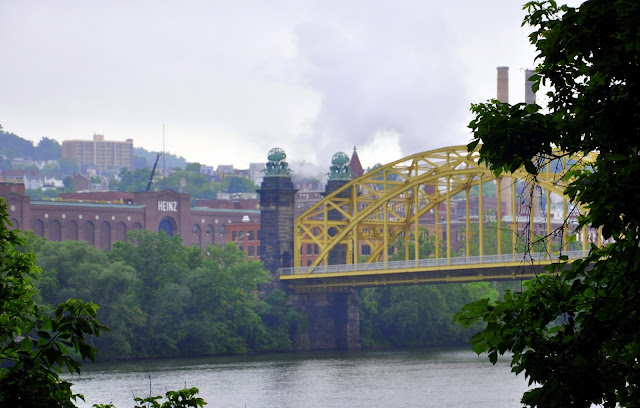 The Three Rivers Heritage Trail evolved from five separate trails and today comprises several unique sections. Most of these segments are riverfront trails along both banks of the three rivers that form Pittsburgh’s famous point: the Allegheny, Monongahela and Ohio. It's also one of the treasures of Pittsburgh -- a great way to get to know the city and its geography and its spirit. 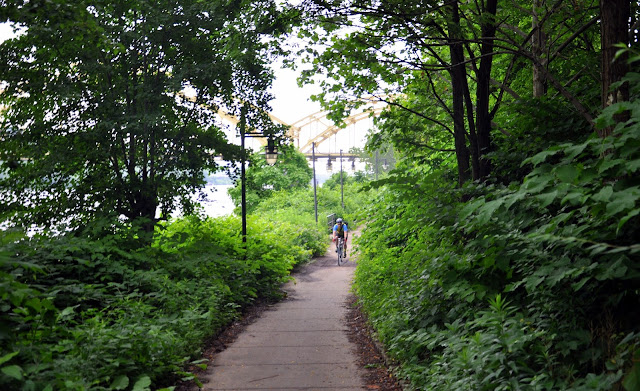 I recently explored the North Shore Trail and the South Shore Trail, along the Allegheny River. I accessed the trail from the Convention Center, since I was staying at the Westin Hotel with my husband while he attended a convention. 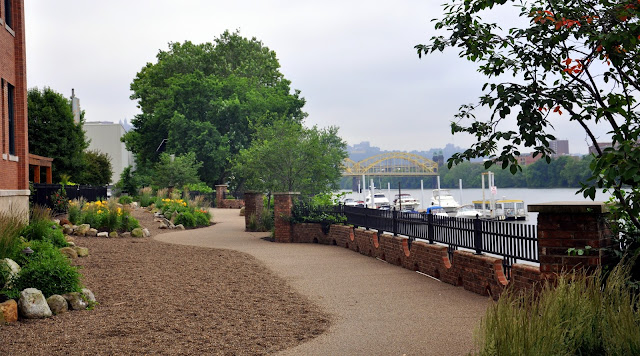 Thus, I started my morning ride on the south bank of the Allegheny River, passing Pittsburgh’s convention center in the shadow of the city’s skyscrapers. I first traveled east, on the "Strip District Trail," which runs through a formerly industrial neighborhood, now being overtaken by gentrified condos. To be honest, there wasn't that much to see on the trail itself, and it petered out in a gravel trail behind a condo building, so I turned around and headed west. 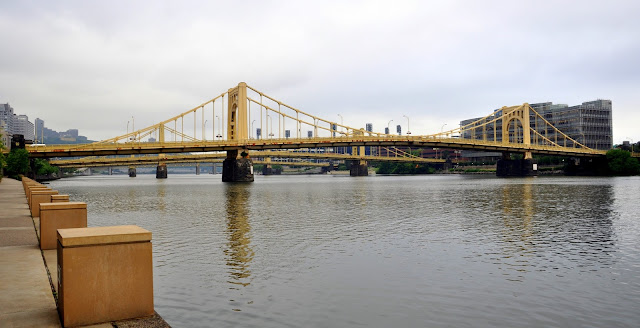 Traveling west on the trail will bring you past the three bridges to Point State Park at the confluence of the three rivers. The park features the remains of Fort Pitt and Fort Duquesne as well as an iconic fountain that sprays water up to 150 feet in the air. 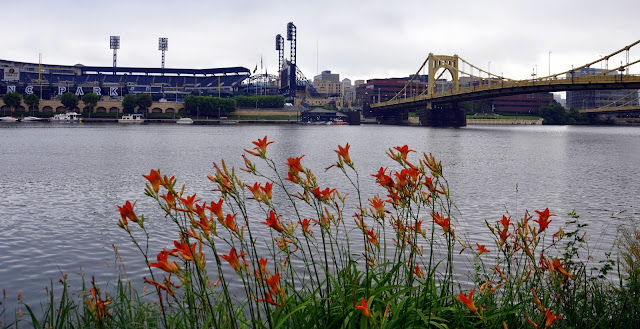 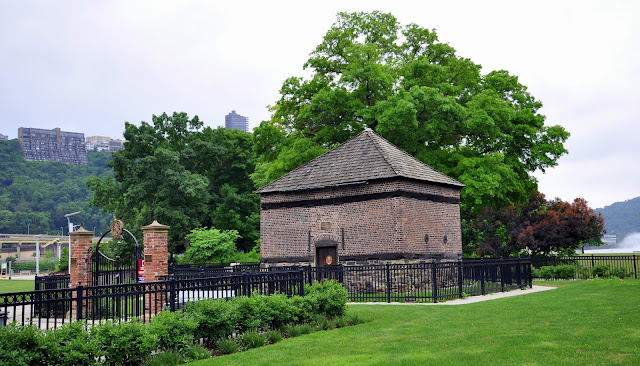 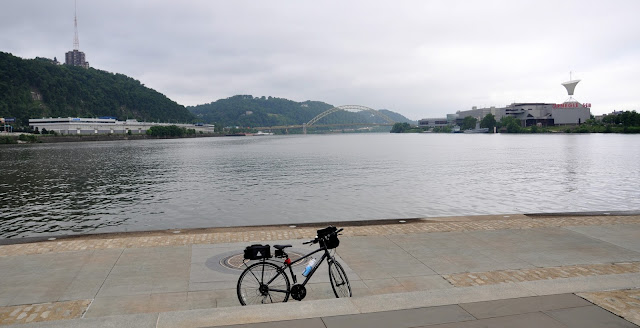 I noticed a bike-friendly ramp up to the Andy Warhol Bridge, so I used that to cross to the North Shore Trail on the other side of the Allegheny. The North Shore Park spans the distance between Heinz Field and PNC Park, the home venues of the Pittsburgh Steelers and Pittsburgh Pirates, respectively. Here the Chateau Trail becomes the North Shore Trail segment, which continues uninterrupted upstream along the Allegheny River to just beyond Millvale’s Riverfront Park. 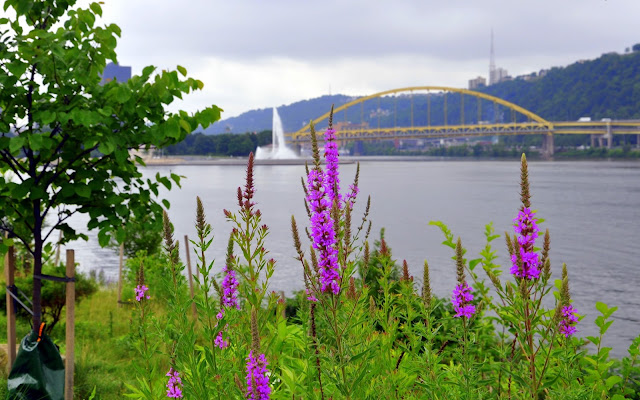 I traveled up to the top of the hill above the river, then turned around, riding past, and just below, the Andy Warhol Bridge, on down to Washington's Landing, an island in the Allegheny River. I rode the ramp up over the truss bridge to the island, explored the island a bit, although it's a loose gravel trail on the island and my smooth hybrid-bike tires made it an uncomfortable ride. 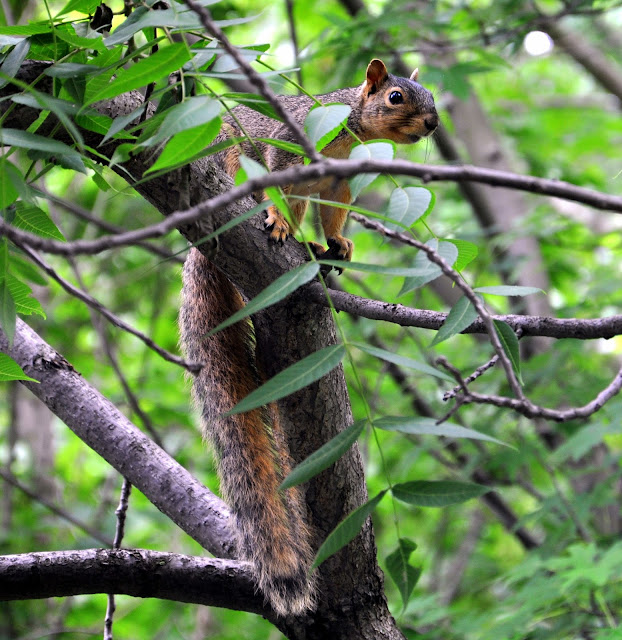 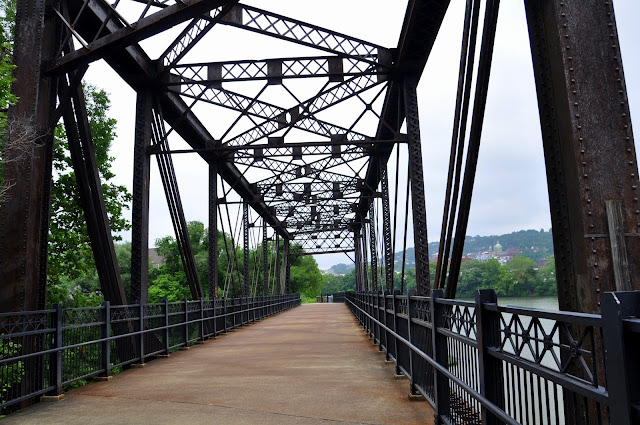 Once back on the North Shore Trail, I continued east for a bit more, until I finally turned back because of time. It was a good ride -- and I'd snapped plenty of interesting photos of Pittsburgh and its bridges. 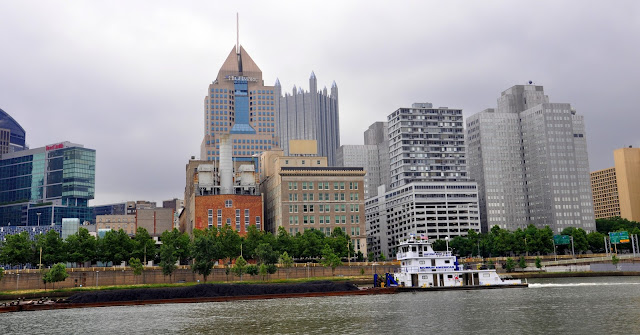 Overall, the route provides an urban outdoor experience with vistas up and down the rivers, a connection to downtown Pittsburgh and close-ups of the contrast between old industry and new. Mostly I enjoyed the ride and exploring Pittsburgh's river fronts up close. Folks I encountered that Friday morning were friendly and waved cheery hellos. There's lots of the trail left to explore, though, for my next visit to Pittsburgh.

Know before you go: Trail end points are at Chateau (Pittsburgh) to Millvale; Strip District to Panther Hollow and Hazelwood (Pittsburgh); Duquesne Heights to Glenwood Bridge (Baldwin), although you can pick up the trail at multiple other points. I joined it at the Convention Center, since I was staying at a nearby hotel.

Getting there: Parking for the Three Rivers Heritage Trail is available in several locations along its route. Refer to the Friends of the Riverfront’s Trail Map and Guide for specific information. 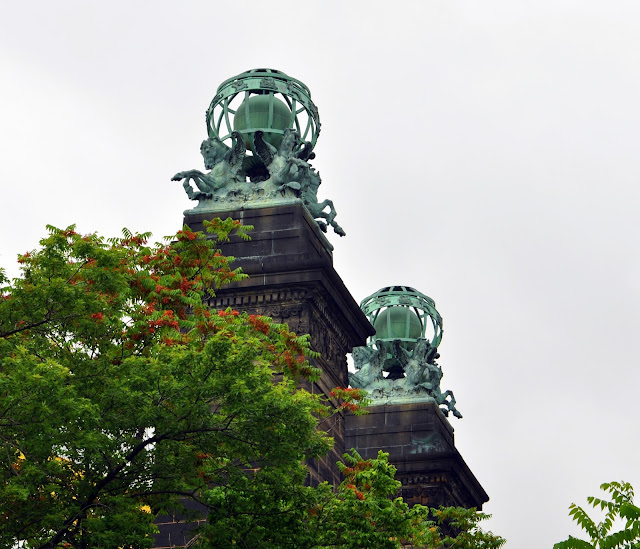 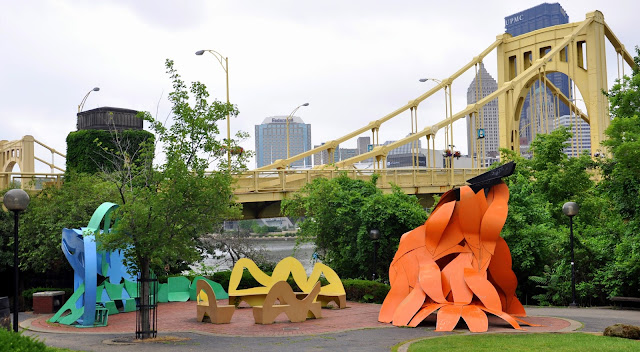 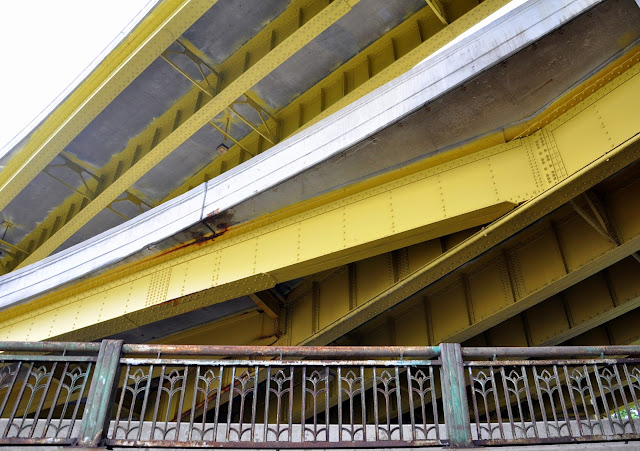