Afterlife Behind Bars at Moundsville Penitentiary

West Virginia Penitentiary was one of the bloodiest and deadliest prisons within the United States. It also is where the dark souls of rapists, murderers, and other criminals still may be walking, spending their afterlife imprisoned behind the same bars that held them captive when they were alive. 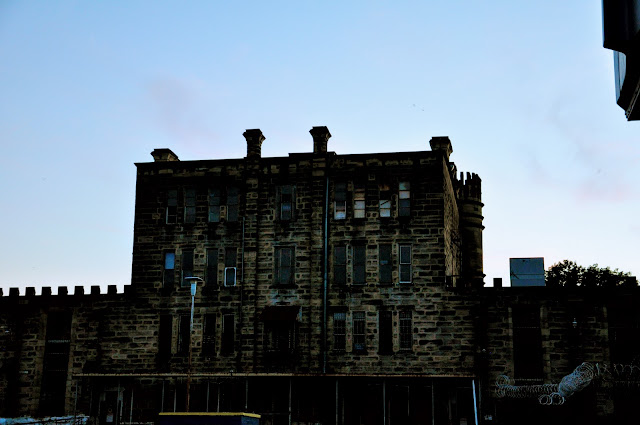 It was, of course, completely natural that my friend and I, after one incredible ghost hunt already, were determined to spend a night with 32 of our closest ghost-hunting friends (you become friends very quickly, even with strangers, when you're so fundamentally frightened). We entered the penitentiary at 9 p.m., finally emerging exhausted but thrilled at 5 a.m. the next morning. The time went quickly. 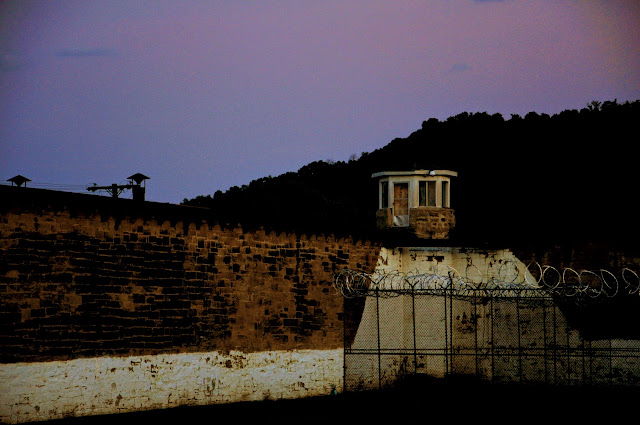 Paranormal groups and enthusiast travel guides consider WV Penitentiary, which I blogged about last week, to be one of the most haunted prisons in the United States, with ghost stories originating as early as the 1930s. Legends include the prison occupying the site of a Native American burial ground, which makes sense, since the Grave Creek Burial Mound is right across the street, and it and other Adena burial mounds in the area provided the town with its name. It also makes absolute sense that a prison so violent that it had to be shut down -- the Department of Justice’s Top Ten list of most violent correctional facilities in the nation included it -- would hold so much paranormal activity.

There are several areas in the prison known as 'hot spots,' where an unusual amount of paranormal activity reportedly occurs, including the infirmary (especially the x-ray table), the cafeteria, the Chapel (although I have to admit, I only felt quiet and peace there), the shower cages, and the North Wagon Gate, which served as a death house until the prison switched over to electrocution as a means of execution. One of the more infamous locations in the prison, with instances of gambling, fighting, and raping, was a recreation room known as "The Sugar Shack." Hot spots aside, with 998 men who died on the prison grounds (murder, execution, sickness, old age), there are few places that aren't hot spots.

Paranormal reports include phantom inmates and, frighteningly, a dark figure wandering the corridors, lurking in the shadows of the halls and cells. Of course, it's impossible to know who this fearsome entity is -- an inmate? a correctional officer? During our evening there, the shadow man made his presence known to our group in the kitchen, seeming to rise out of the floor near one of our group members, but then disappearing into the darkness just as quickly. According to the daytime tour guide, this shadow figure "lives" in the kitchen, although he roams freely throughout the halls and corridors. 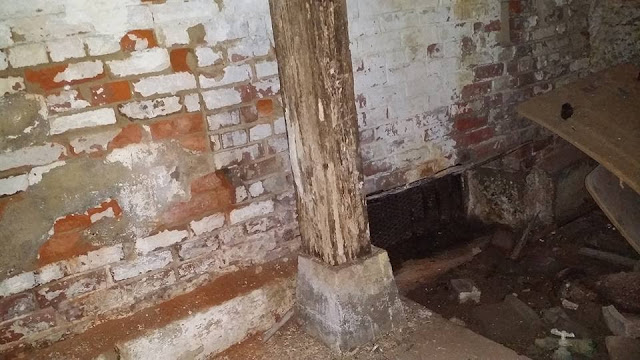 Most ghost hunters at the prison experience unexplained noises -- pings, creaks, clanks and cranking noises, snorts, snuffles, whispers, voices, and cold spots, and during our ghost hunt, we experienced all of these. Some believe that William Red Snyder, stabbed 36 times in 1986, still walks the corridors, often touching tourists and ghost hunters, alike. To my relief and disappointment, we made no contact with Red, or any other named inmate, although when we were down in the "hole," or boiler room, we felt as if an entity stalked us from the corners of the dank basement. It was really frightening, although I dared myself to sit on a chair near the corner, until my hysteria and fear finally overwhelmed me, and I joined the safety of the informal circle the others had formed in the center of the room. I envied one of our group her courage, for daring to stand alone in the corner where the activity was making itself known.
In total, 36 known homicides took place in the prison. One of the more notable ones is the butchering of R.D. Wall. On October 8, 1929, after "snitching" on his fellow inmates, he was attacked by three prisoners with dull shivs while heading to the boiler room, or "hole." Was he the entity that stalked us from the corners of the room? Although his body didn't immediately die -- he was brought to the hospital -- the dull shivs entering his eyes probably performed the equivalent of a frontal lobotomy.

At one point, during a session on the cell block, my friend and I were sitting on the third tier of cells. I felt pressure on my throat and chin, as if being pressed. This went on for a second or two, then it was gone. I was sitting right in front of a cell, with my back to the cell door. Was this a ghostly hand reaching out of the darkness to threaten me? Or was it fear that wrapped itself around my jaw? Later, near the same spot, a clank suddenly echoed in the cell behind us, scaring the bejesus out of us. I'm not a medium -- so I'm always taken by surprise by paranormal activity. I can't sense whether an entity is dark or more benign. At the prison, we assumed most were not benign, given the lives they led and the misery they lived in at the penitentiary.

Sometimes, during the ghost hunt, there simply is silence in the darkness. There is a lot of waiting, a collective holding of breath. There is more waiting, more, and still more. You say things out loud, breaking the silence, politely inviting the entities to make themselves known. Then you wait, and hope, willing the darkness to offer up a sound, a whisper, something, anything (as long as it's not too close to you). Ghost hunting is a mixture of boredom, hope, and abject terror... 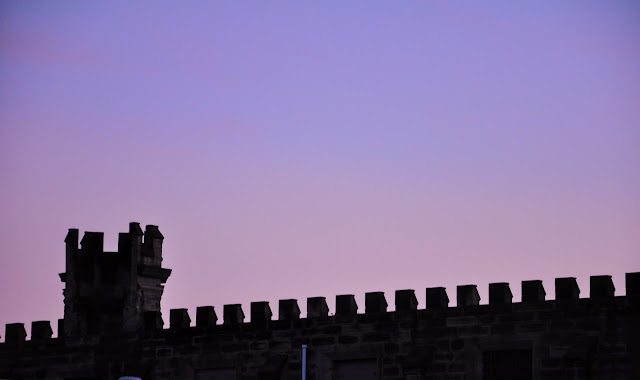 The ghost hunts start at various times, depending on the sponsor (whether the WVP Penitentiary or an outside company such as Ghost Hunts USA), but will include a 90-minute tour that will provide you a familiarization of the known hot spots and some cold hard facts about the prison -- the numbers of the dead, the conditions they endured, how many lived in those inhumane conditions.

Know before you go #1: Having a recorder or EMF detector, in addition to your camera, would be helpful, as some of the ghost hunts give you extensive free time to explore on your own.

Know before you go #2: Whether you believe or don't, weird things might happen. During the day tour (in last week's post), my camera stopped taking photos -- I kept trying periodically -- while at the penitentiary. After the prison tour, we crossed the street to tour the Grave Creek Burial Mound and the associated museum -- camera worked perfectly. It worked perfectly all the rest of the afternoon, including just outside the prison right before the ghost hunt began. We entered the prison, I took one photo (in fact, the photo immediately above), and it stopped working. Brought it home, and now it's working perfectly again. Who knows?!

Know before you go #3: Dress for the weather. It can get chilly after the sun sets, and then there are the cold spots. Wear comfortable shoes, as you're on your feet for extensive periods, and it's a big place, so there's lots of walking. You probably want to wear long pants (in lieu of shorts), as it's also likely you'll be sitting on the floor in some pretty icky places.

Know before you go #4: Ghosts are not performing seals, offering you a show on demand. They are fickle creatures, preferring to sneak up on you or surprise you when you least expect it. Although it is LIKELY you'll experience something at the penitentiary, there are no guarantees what, if anything, you will see or hear. What reputable companies and facilities do guarantee is that nothing is staged.

Getting there: 818 Jefferson Avenue, Moundsville, WV 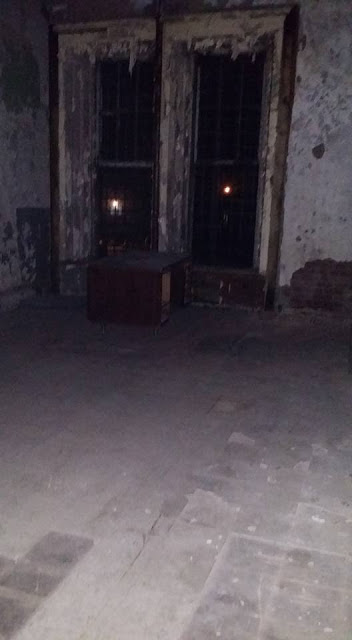 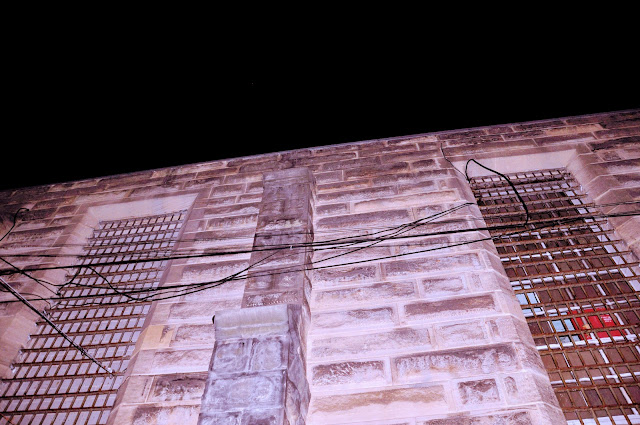