Adams County is a picturesque rural county in south central Pennsylvania. Although synonymously known as Apple Country, it is most well known for the little town of Gettysburg, the site of the most famous Civil War battle.

But as I've posted in this blog before, there is more to Adams County, and Gettysburg, than the battlefields, although the National Battlefield Park is well worth spending significant time in! The area also boasts a number of very fine restaurants and a surprising array of attractions and activities.

Because of the beauty of the countryside, my husband and I decided to follow the scenic driving tour, ostensibly to go leaf peeping, although we ended up being a week too early, we think. Or maybe the leaf color wasn't that great last year, due to the late summer/early autumn drought that the mid-Atlantic region was experiencing. Even with the leaf color being muted, it was a lovely way to spend an afternoon. We ended up stopping at a couple of the county's farmers markets/orchards as well. 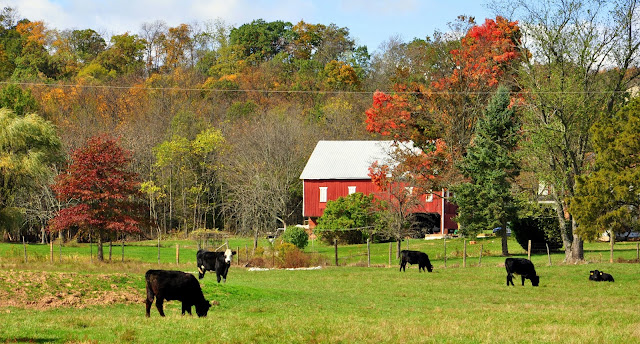 All very picturesque, and we enjoyed a wonderful afternoon exploring Adams County.

The tour begins at Meade School on Springs Avenue. The first stop allows you to appreciate this imposing brick building, now a local hotel. 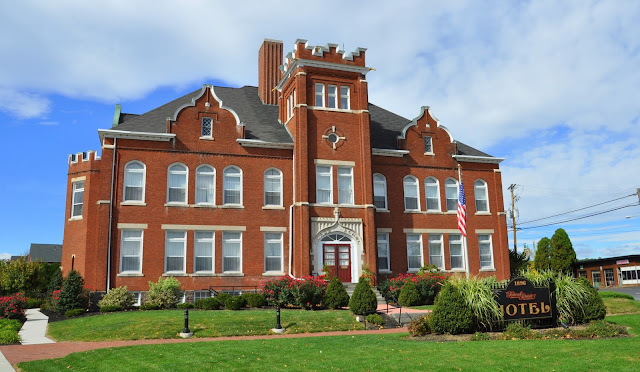 Then it brings you through Seminary Ridge. The road -- Confederate Ave -- follows the contour of Seminary Ridge, which was the main Confederate position for much of the battle. Along West Confederate Avenue there are many cannons and monuments, with paved areas for stopping along the road. Delightfully, near Spangler's Woods, we encountered a horse-back trail ride tour of the battlefields. (I made a note for next year's bucket list!)

Soon, the tour turns right onto Millerstown Road and headed west into the countryside, away from the battlefields. But as you explore the area, it is well to keep in mind that the battles extended beyond the boundaries of the National Battlefield Park. 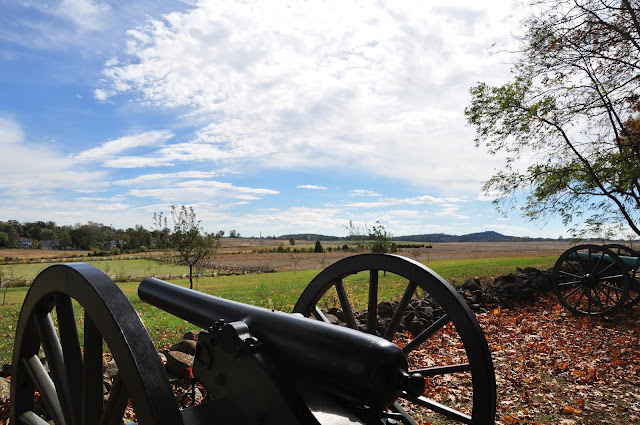 Just a short drive to the south of town, right on the outskirts of the battlefields near Pickett’s Charge, you come to Sachs Bridge, which is purportedly haunted. A stop on at least one of Gettysburg's ghost tours, and a favorite place for ghost hunting, Sachs Bridge can be a scary place at night: full bodied apparitions, disembodied voices, cold spots and people being touched are some of the paranormal occurrences that have been reported.

The Confederate Army was positioned right across the river and once the battle had ended they retreated across this bridge, walking right past three confederate deserters, who were executed and displayed for their crimes. The bridge, like many barns and homes in the immediate vicinity, was also used as a field hospital during and after those 3 days in July. It is believed that the three men hanged on the bridge for being either deserters or spies for the Union (stories differ) now haunt the bridge; its use as a field hospital is just icing on the cake, paranormally speaking. 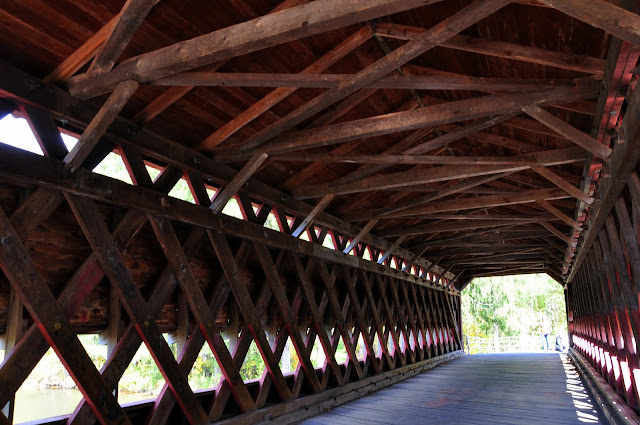 In daylight, what is most noticeable about the bridge is its interior lattice design -- a product of it being a "Town truss" covered bridge. The Town truss design was developed by Ithiel Town, of Connecticut, and consists of wooden beams criss-crossed to form a lattice.

As you enter orchard country -- the tour takes you through peach and apple orchards -- the route unfolds view after view of autumnal beauty. Ahead, you will get closer glimpses of South Mountain, through/over which General Lee came to Gettysburg.

Occasionally there are surprises, such as the weird elephant statue along the side of the road.

As the tour takes you onto Church Road, the guide notes that this is Shawnee Indian Country. Thomas Jemison had moved his family into the area in 1754. Later, the Jemisons and another family were attacked and captured as prisoners by a band of four Frenchmen and six Shawnee Indians. They were taken near Chambersburg and all were killed, except Mary Jemison and a little boy. She integrated into the Indian tribe, eventually marrying a Shawnee man. At tour stop 18, there's a statue of Mary Jemison at the Church of St. Ignatius Loyola, built in 1816. 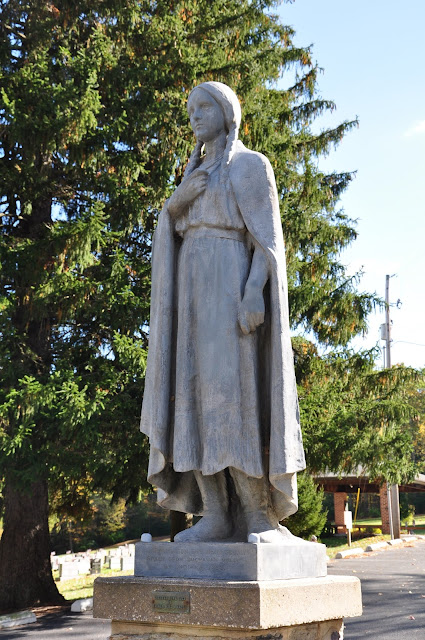 Know before you go: The Scenic Valley Tour will bring you past some of Adams County’s many areas of historic interest and scenic beauty, at your own pace. The tour covers some 36 miles south, west and north of Gettysburg, including several orchards. The roads you will travel are all two-lane, paved secondary and all turns and changes of direction are clearly marked by “SCENIC VALLEY TOUR” signs. Allow yourself about three hours to drive the route; more if you include lunch or make frequent stops along the way.

Website: A pdf of the driving tour can be found here:  http://www.destinationgettysburg.com/uploads/files/members/Scenic%20Valley%20Tour%2010.pdf

For other day trip destinations in and around Adams County, go to the Blog's Find a Great Place to Day Trip or click on the Gettysburg or Destination Gettysburg label below.