In this guest blog, Steve Rosenbach takes us on an unusual exploration of some of New York City's secrets!

In the first decade of the twentieth century, one young, beautiful woman became America's first supermodel.

Every sculptor wanted to sculpt her. Every painter wanted to paint her. She even appeard in some of the earliest Hollywood movies... nude!

Her fame and acclaim lasted for only 15 years, and then it all suddenly collapsed. At age thirty-one, she tried to commit suicide, and at forty, she was committed to a mental institution, where she lived for the next sixty-five years.

In Manhattan, almost 100 years after her career ended, Audrey Munson is everywhere, from the southern tip of the island all the way to Columbia University near 116th Street. New Yorkers and tourists alike pass her by and even eat lunch under her gaze without knowing her amazing story.

I stumbled across this very story about two years ago, learned more, and, being a photographer who loves shooting in New York City, knew I had to photographically explore her legacy. In April, I took a day trip to Manhattan to scout out and photograph all of the outdoor sculptures attributed to Audrey as the model. The rest of this post will give you the flavor of searching for Audrey, and may entice you to try if for yourself or join me on a photo workshop.

If you’re going from south to north, our first stop is the Alexander Hamilton Custom House at Bowling Green, and the foot of lower Broadway in the Financial District. If I’m on the east side, I’ll take a No. 5 train, which stops right at Bowling Green. If I’m near Penn Station, I’ll walk to Herald Square and take an R or a W (weekends only) to Whitehall Street and walk a few short blocks north to the Custom House.

In front of the Custom House, which now houses the National Museum of the American Indian, you’ll find a set of four monumental statue groups, The Continents, by Daniel Chester French. From right to left, they represent Asia, the Americas, Europe, and Africa. The Americas group is the one that is associated with Audrey Munson, although there is some controversy over whether she actually posed for it (later in her life, she wrote that she posed for all four of the main figures in each group.) 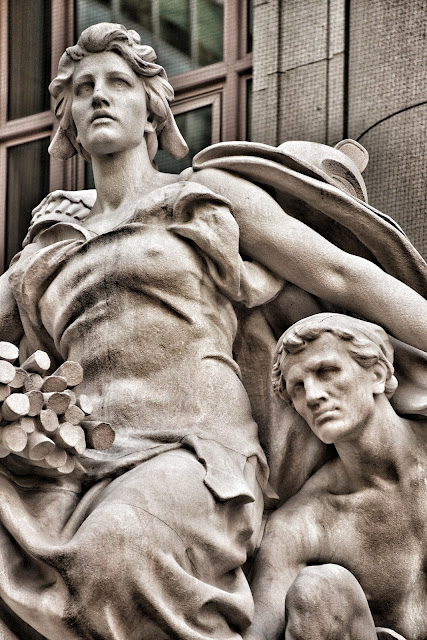 While you’re here, you’ll want to visit the Custom House itself. Designed by Cass Gilbert and built between 1902-1907, it’s a masterpiece of the Beaux-Arts style. There is amazing decoration both inside and out, including a magnificent rotunda.

The next “Audrey” is six-tenths of a mile away at 580 feet up in the air, at the Municipal Building. If you’re in the mood for walking, the stroll up lower Broadway and over to the east side of City Hall Park is a delightful way to take in a lot of Lower Manhttan’s iconic sights, such as the “Canyon of Heroes,” Trinity Church, Wall Street, and more. Otherwise, you can hop onto the No. 5 subway at Bowling Green and take it to the Brooklyn Bridge/City Hall stop.

Arriving near the Municipal Building, you’ll see Audrey as the graceful, gilded statue, Civic Pride, at the top of the building. Bring a pair of binoculars (or a telephoto lens) to get a good look at her. She is twenty-five feet tall and made of about 500 pieces of copper over an iron skeleton. Sculpture Adolf Alexander Weinman has her holding a shield with the crest of New York City in her right hand and holding aloft a crown with five crenellations, representing the five boroughs of New York, in her left. 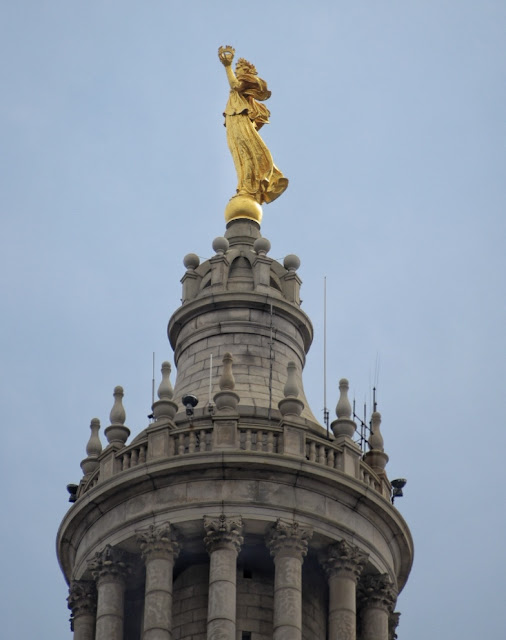 The Municipal Building is a forty-story edifice, designed by architect William Kendall of the famed firm of McKim, Meade, and White, and completed in 1914. It is the tallest Beaux-Art building in the world. Worth seeing are the south arcade, lined with Guastavino ceiling tiles and the central arch on Centre Street, loosely inspired by the Arch of Constantine in Rome.

While you’re there to see Audrey, there is plenty more in the neighborhood (referred to as Civic Center,) including Surrogate’s Court, City Hall, and City Hall Park, all right across the street. A block to the north is Foley Square, which is fronted on the east by the imposing Thurgood Marshall Federal Court Building and New York County Courthouse (for my fellow Law & Order fans!)

Our next stop will be to see Audrey sculpted into one side of the monumental arch of the Manhattan approach to the Manhattan Bridge. Walk up through Chinatown and go to the corner of Canal Street and Chrystie Street, where you can cross over to a walkway that hugs the colonnade. At the end of the colonnade, you’ll see Audrey as the central figure of Carl Augustus Heber’s 1914 work, Sprit of Commerce. 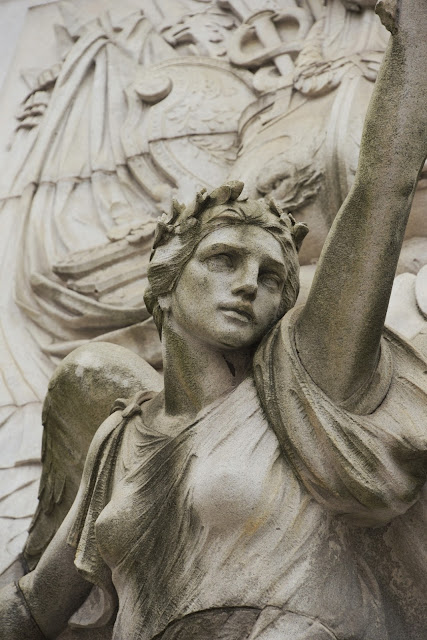 Across the busy bridge approaches, the sculpture on the south side of the arch is Spirit of Industry, also by Heber.

If you’re getting hungry at this point, it would be a good idea to walk back westward on Canal Street and stop for lunch at Big Wong Restaurant at 67 Mott Street. The food is tasty, the menu is ginormous, and the service is fast.

There are another seven outdoor locations to the north with sculptures of Audrey, some having more than one figure that she modeled for, but for now, I’ll just mention one more of them at the southeast corner of Central Park.

Pomona is the centerpiece of the Pultzer Fountain, just opposite the Plaza Hotel. It’s one of my favorite Audreys. When I lived in Manhattan many years ago, like many New Yorkers and visitors, I often passed by admired it without having any idea of the story behind it. In fact, a few weeks before I scouted all of the Manhattan Audreys, I accidentally stumbled upon a photo I took of Pomona about 1978. It was actually a test print, and on the back, I wrote “15 sec f/8,” which was the exposure I gave it in my kitchenette-darkroom all those years ago. The photo was not an especially good one, and I don’t remember making any further enlargements, but for some reason I kept the test print. 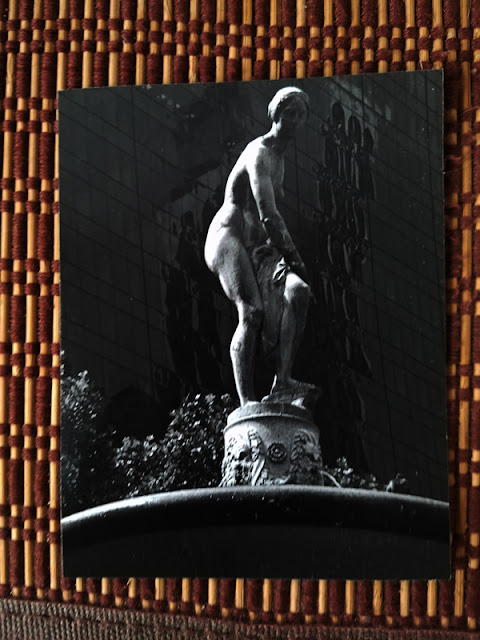 Pomona is a work by Karl Bitter, and represents the Roman goddess Pomona, the diety of abundance. Bitter tragically died in an auto accident (this is 1915!) before completing the sculpture. It was finished by his close friend and fellow Austrian immigrant Isidore Konti, who also had a long association with Audrey.

The Pulitzer Fountain is a nice place to sit and relax and watch the city go by. From there, you can go right into Central Park in the area of the Park that includes The Pond, Gapstow Bridge, Wollman Rink, and The Zoo. Or, you can walk west along Central Park South and head over to Columbus Circle. 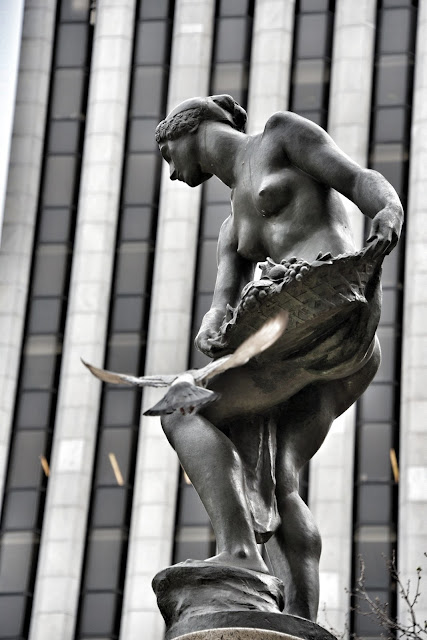 From my research and scouting of Audrey, I created a photo workshop that visits all ten outdoor locations in Manhattan that feature her. The workshop debuted in August 2017 and got a very positive reaction.

Thanks to Jody for inviting me to be a guest blogger on her great blog!

Steve also has a blog: Cityscape Photo blog at http://cityscape-photo.com

Have you daytripped somewhere interesting? I'd love to hear what you're doing! Email [email protected] if you're interested in being a guest-blogger!
Posted by Jody Arneson at 9:30 AM