It Is an Excellent Good Pudding 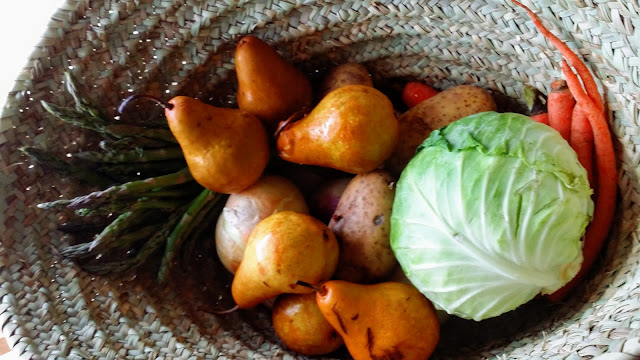 If you really want to understand a time period that isn't our own, then live it, even if only for a few hours. That was the thought as my sister and I signed up for a second open hearth cooking seminar at Gunston Hall.

If ever you think preparing a full Thanksgiving meal, replete with turkey and stuffing, gravy and cranberry sauce, several different veggies, sweet potato casserole, mashed potatoes, rolls, and pies for desert a huge undertaking, try making it on the hearth! Although Thanksgiving fare wasn't on the menu, I did compare the work in preparing the colonial meal on the open hearth with a typical Thanksgiving meal preparation. We have it easy, in the 21st century! 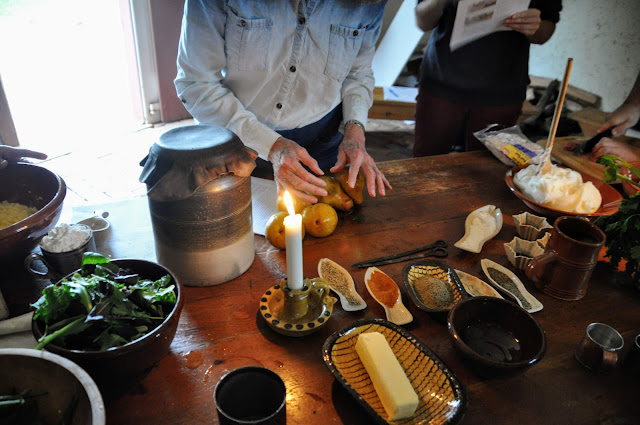 The cooking class teaches all the intricacies regarding colonial-era open hearth cooking, from what the various pots and pans are (from spiders to pipkins -- I love pipkins, by the way) to how to interpret the original recipes to safety precautions to follow while cooking and baking over open flames and hot coals. 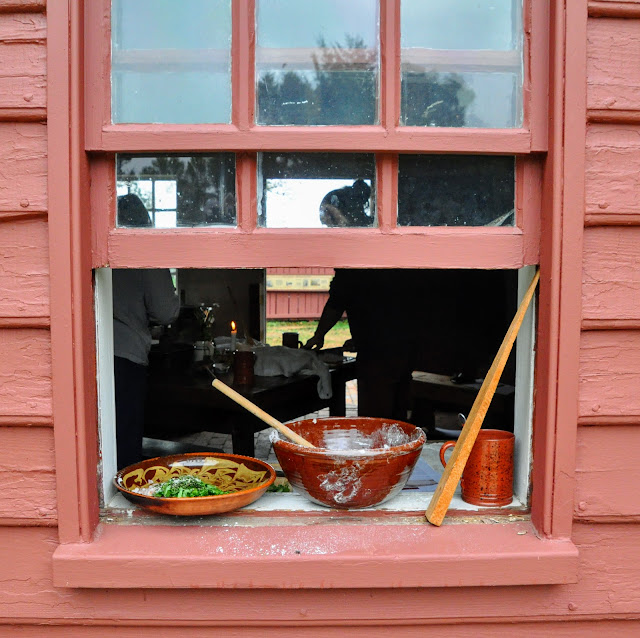 During the cooking class, we pretend we're in the colonial era. There is no running water in those colonial kitchens, so we carry our water in authentic, heavy wooden buckets from the pump, 20 feet away from the kitchen (we were grateful that there's a pump, and not a well, by the way). Things such as mixers and meat grinders either didn't exist at the time or wouldn't have been part of George Mason's kitchen, so we made all the food with the tools of the era (mostly recreated but authentic to the period).

The "Bill of Fare" included Roasted Beef, Yorkshire Pudding, Puff with a Forcemeat of Vegetables, Scotch Eggs, and Beans Ragoo'd with Cabbage, topped off with Waffles with Pear Marmalade. 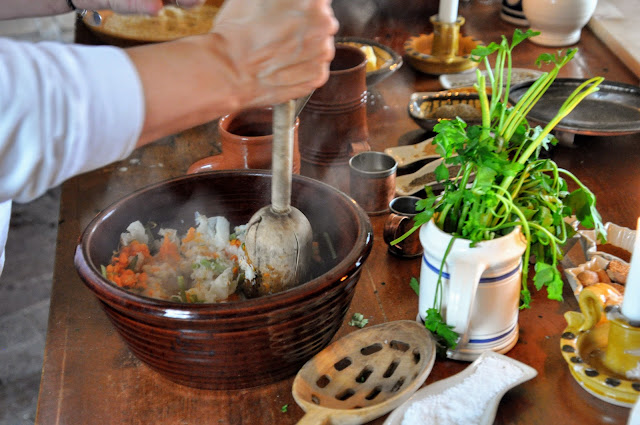 Modern recipes provide specific measuring amounts, time items should boil or bake, but not the old time recipes, which assume both a specific amount of inherent knowledge of cooking and baking, as well as allowing for a cook's variations -- cooking is an art. We interpreted the original recipes (such as the ones below) as best as we could, occasionally laughing as the wording, such as the Yorkshire Pudding recipe's "let it bake on the fire till you think it is enough." Ummm.... okay! 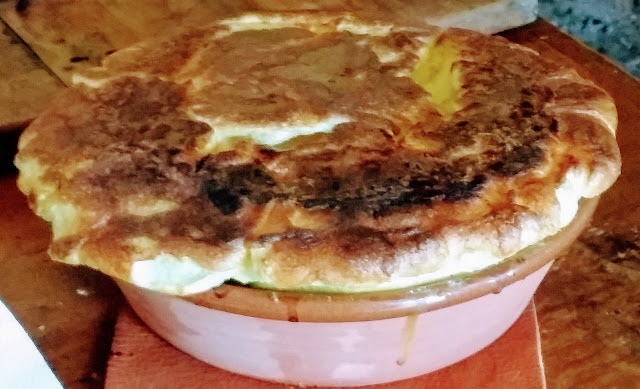 Yorkshire Pudding
Take a quart of milk, four eggs and a little salt make it up into a thick batter with flour, like pancake batter. You must have a good piece of meat at the fire; take a stew-pan and put some dripping in, set it on the fire; when it boils, pour in your pudding; let it bake on the fire till you think it is enough, then turn a plate upside down in the dripping pan, that the dripping may not be blacked; set your stew pan on it under your meat, and let the dripping drop on the pudding and the heat of the fire come to it, to make it of a fine brown. When your meat is done and sent to table, drain all the fat from your pudding and set it on the fire again to dry a little; then slide it as dry as you can into a dish; melt some butter, and pour it into a cup and set it in the middle of the pudding. It is an excellent good pudding; the gravy of the meat eats well with it.

The Scotch Eggs recipe was maddening in its brevity:
Boil hard 5 pullet eggs and without removing the white cover completely with a fine relishing of forcemeat, in which let scraped pork bear due proportion. Fry of a beautiful yellow brown, and serve with a good gravy.

This was one of the hardest recipes, involving making from scratch the "fine relishing of forcemeat, in which let scraped pork bear due proportion," since that, basically, was pork sausage (for which one of my co-participants laboriously fine chopped a pork loin and an equal portion of suet for close to 2 hours). For this recipe, a meat grinder would have made short shrift of the work. 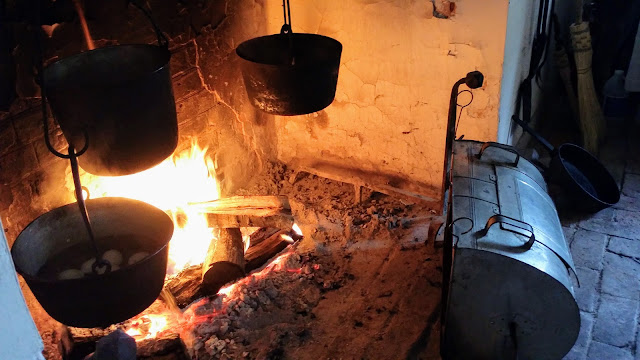 By the end of the day, we are grateful to sit down to enjoy the meal, which tastes better because of all the effort that went into it. Then we're up again on our feet to wash the dishes and clean the kitchen. It's a long, exhausting, and incredibly rewarding day! 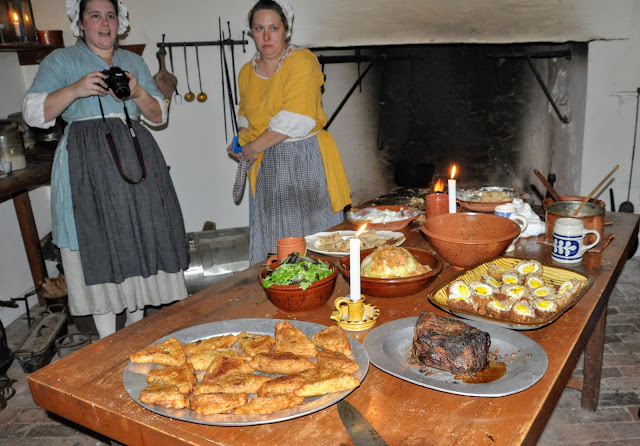 If you're interested in exploring some of these recipes on your own, check out the following books:

We were lucky enough to get a chance to visit Gunston Hall's library, where we got to see a recipe book more than two centuries old!

I emerged from this class, as I did the prior one my sister and I took a year ago, with not only a greater appreciation of the labor involved with open hearth cooking, but a willingness to try more recipes in the comfort and convenience of my 21st century kitchen. 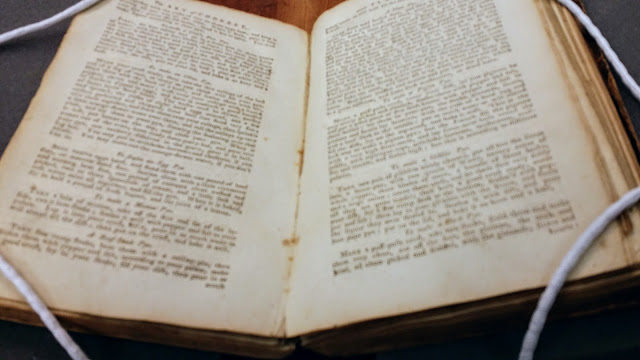 Hours: The open hearth cooking classing are offered twice a year, in October and April (usually). Recommend getting on Gunston Hall's email list so you're among the first to learn about future offerings of the Open Hearth Cooking Class. 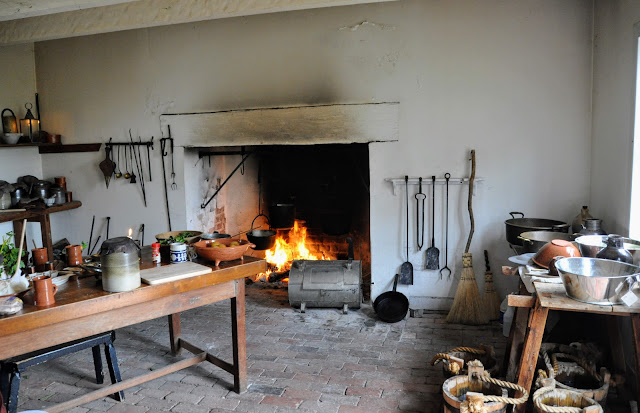 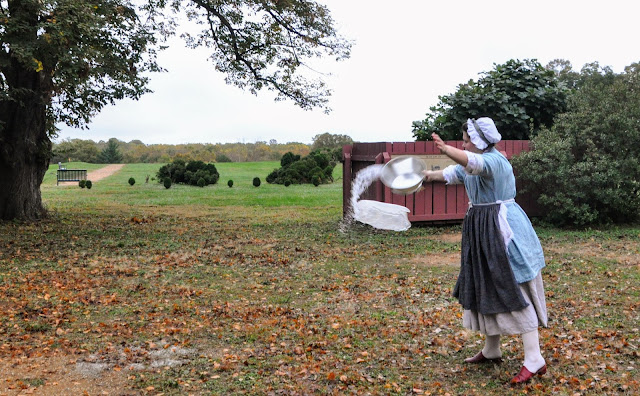