Where to See Holiday Lights in and near Maryland

Going to holiday lights displays has become an annual tradition for me and my family. Check out the places to go to enjoy the magic of the holiday season!


But the fascination with the lights made me wonder -- how did the extravagant lights displays come about?

As our holidays celebrations evolved, so did our fascination with lights displays. They became bigger and brighter....

The custom of lights at Christmas goes back to the use of candles that decorated the Christmas tree in Christian homes in early modern Germany, in the mid-1800s. Christmas trees displayed publicly and illuminated with electric lights became popular in the early 20th century. By the mid-20th century, it became customary to display strings of electric lights as along streets and on buildings. In the 1960s, it became popular to outline private homes with such Christmas lights in tract housing.

Eventually the research led me down the rabbit hole of wondering what happens to all those discarded lights? Is there a way to possibly recycle them? Christmas lighting does lead to some extensive recycling issues -- and most, unfortunately, find their way into local landfills.

The good news is that there's a place that actually wants our old, broken Christmas lights! Every year, more than 20 million pounds of discarded holiday lights are shipped to Shijiao, China (near Guangzhou), which has the distinction of being "the world capital for recycling Christmas lights." I suspect there's little competition for that title!

The combination of cheap labor and low, or no, environmental standards made it profitable for local companies and factories to recycle the lights. As late as 2009, many factories would simply burn the lights to melt the plastic and retrieve the copper wire, releasing toxic fumes into the local environment. However, now a safer technique is used, which involves chopping the lights into a fine sand-like consistency, mixing it with water and vibrating the slurry on a table causing the different elements to separate out, similar to the process of panning for gold. Everything is recycled: copper, brass, plastic and glass.

More and more cities in the United States are setting up sensible alternatives and schemes to recycle Christmas lights, with towns organizing drop-off points for handing in old or discarded lights. As you take down your lights displays, please look for these places and turn in your old lights, so that they can be responsibly recycled, rather than lasting an eternity in a landfill somewhere.

Symphony of Lights is a dazzling display of more than 100 larger-than-life animated and stationary holiday light creations, made up of more than 250,000 bulbs that you enjoy as you drive through the grounds of Merriweather Post Pavilion in Columbia, MD.

Garden of Lights at Brookside Gardens

During just one month a year, Brookside Gardens is illuminated with more than one million dazzling colorful lights shaped into hand-crafted, original art forms of flowers, animals and other natural elements. Stroll from garden to garden enjoying twinkling tree forms, fountains, sparkling snowflakes overhead and more. 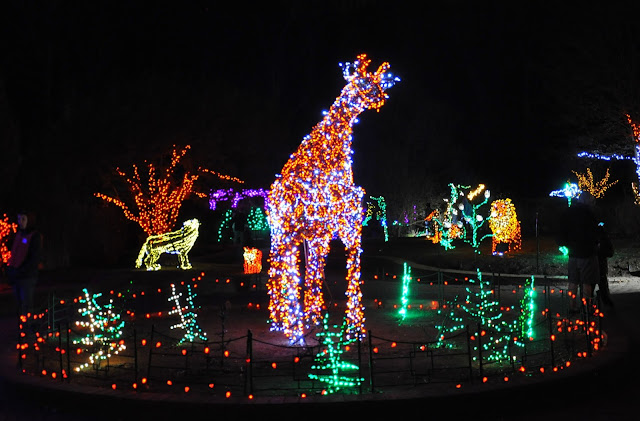 See more than 350 illuminated displays at Winter Lights at Seneca Creek along a 3.5-mile drive through the park. Driving through the enchanted forest setting, you will experience an array of displays that light up the night. Making its debut this year is a new frog prince display, nestled among traditional festival favorites that include a Fantasy Castle and magical unicorn fountain, Winter Woods, Teddy Bear Land, Victorian Village, and the North Pole.

Getting there: Seneca Creek State Park, 11950 Clopper Road Gaithersburg, Maryland. From I-270, take Exit 10, Clopper Road (Route 117). Turn right at the light, proceed for approximately 2 miles. The park is on the left.

Lights on the Bay

The Lights on the Bay display is a 2-mile scenic drive along the shore of the Chesapeake Bay in Sandy Point State Park with approximately 70 animated and stationary displays illuminating the roadway.

ZooLights at the National Zoo in Washington, D.C. features sculptures of many of the Zoo’s most popular animals, including giant pandas, Asian elephants, gibbons, a sea lion, an octopus, and a Komodo dragon. Visitors at ZooLights will enjoy winter-themed activities, a laser light show, musical performances, train rides, tubing and animal exhibits. Visitors can warm up inside the animal houses and enjoy nocturnal animals. The Small Mammal House, Great Ape House, Reptile Discover Center, Think Tank, and Kid’s Farm will be open every night.

Getting there: 3001 Connecticut Ave., NW, Washington, D.C.; the main entrance to the Zoo is along Connecticut Avenue. There are also two entrances at the east side of the Zoo, near Rock Creek Park. One is off Rock Creek Parkway, the other is at the intersection of Harvard Street and Adams Mill Road.