March is Women's History Month, an excellent time to share the story of one of the mid-Atlantic region's remarkable although monstrous women. If you've ever traveled on the Delmarva peninsula and wondered about those historical markers about Patty Cannon or the Cannon Gang, this post is for you!

Patty Cannon was, by all accounts, a monster. She was possibly America's first serial killer, and certainly America's first female serial killer. She killed 11 and was involved in the deaths of another 12. She ran what amounted to an organized crime organization on the edges of Sussex County in Delaware and Caroline and Dorchester counties in Maryland that extended well beyond her home turf into Washington DC, Baltimore, and Philadelphia. She was smart, independent, charismatic, and a scary woman to oppose. She supposedly threw a child into the fire to make it be quiet and confessed to murdering her own husband. She also murdered two other children. This is not someone you'd want to meet in person.

In fact, children still growing up in the region view her as a boogey man. "Be good, or else Patty Cannon will come for you!"

There is also a lot of myth and confusion about Cannon's story. What we know of her is a combination of local legend, historical record, and fiction both from a novel written two decades after her death and newspaper articles of the times. In this post I've tried to present the facts about her life, and have identified legend and theories as such.

In the early 1800s, Cannon led a gang who kidnapped free blacks and sold them into slavery further south. She would indiscriminately murder anyone — including her own husband — who stood in her way.

It was a perfect storm in politics, attitudes, and fear in the surrounding community that allowed almost everyone to turn a blind eye to the Cannon gang's evil doings. She operated in a rural, sparsely populated part of the Delmarva Peninsula that allowed her gang to freely come and go. And the Cannon family -- none of them model citizens, by the way -- were populous in the area, operating a local ferry across the Nanticoke and owning several regional homes.

They used the Nanticoke River and its innumerable inlets and small islands to hide their captives and evidence of their operations. The river provided a convenient route to transport captives. The sparsely populated landscape shielded them.


Cannon's past is shrouded in mystery. She was born in the mid 1760s. One account has her descended from a debauched English aristocrat, another as the daughter of a British or Canadian military officer living in Canada, where amazingly a wheelwright from Delaware just happened to be traveling, just happened to fall sick, only to be nursed back to health by the charming, teenaged Patty. Regardless of how they met, they married and ended up in Sussex County. 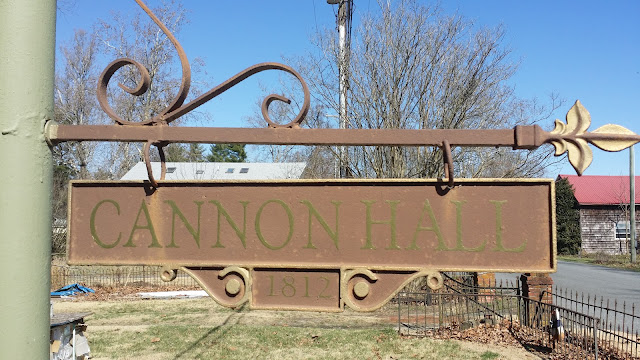 They settled down on the Nanticoke River, near the Maryland border, and had two children. If so, she must have had twins or the two children in quick succession, because supposedly within just three years her husband was dead. Cannon would later confess to poisoning him. Her nefarious activities probably started in the first decade of 1800s, when importing kidnapped Africans as slaves was outlawed.

Cannon Hall was once a hang out of Patty's Johnson Gang; they hid their captives in the basement. Cannon Hall is conveniently located along the banks of the Nanticoke River and spitting distance from the Cannon Ferry (now the Woodland Ferry). Cannon and her gang would often shackle their captives to trees on a river island, which is now underwater, until they had enough captives to make it worth shipping them down to North Carolina, where they'd start the trek inland or further south.

Patty and her son-in-law, Joe Johnson, built a house and set up a tavern, known as “Joe Johnson’s Tavern” at the crossroads of what is now Md routes 577 and 392; 50 yards east is the state line between Maryland and Delaware. Cannon used the juxtaposition of three jurisdictions -- Caroline County and Dorchester County in Maryland and Sussex County in Delaware -- to her advantage.

An historical marker in Reliance, MD now identifies the location of Patty Cannon’s house, in front of another building, which was built on top of the foundation of Joe Johnson's Tavern.

Cannon's illicit activities were an open secret. Her neighbors and community members feared her, so turned a blind eye to the disappearances of the lowest rung on society: free blacks and slaves. Multiple times local sheriffs in Maryland or Delaware would try to serve warrants but were averted each time as Cannon took advantage of the nearby state or county lines.

Finally in 1829, according to local legend, when she was 64 years young, the Dorchester County sheriff -- apparently a nice looking man -- asked Cannon to go on a walk, during which he somehow tricked her into stepping over the Delaware state line, where she was finally taken into custody. 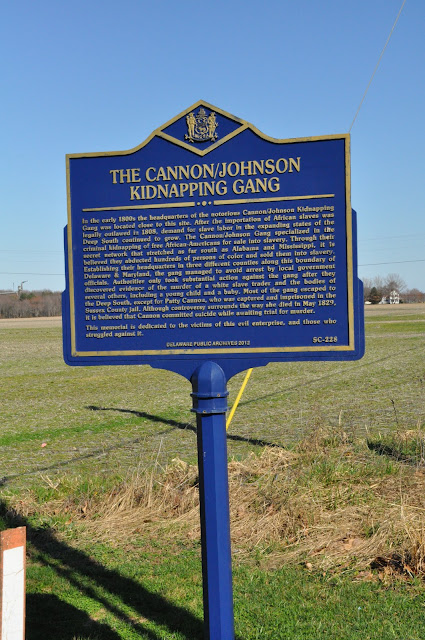 When the tavern was searched, incriminating evidence was found. In the attic the sheriff found 21 people in chains, awaiting transport to the slave market. They were immediately freed. Patty and all the members of the gang were arrested and taken to Georgetown, DE to be tried. One member of the gang turned state’s evidence and told the police where the bodies were buried.

She ingested poison while in jail, and while many believe she took poison in a last defiant act against authority, some say she was poisoned so she wouldn't incriminate others in her gang. She was buried in the yard of the old jail, where recent excavations unearthed a skull, believed to be hers.

If you want to chase Patty Cannon:

Know before you go: This tour should only take you an hour or two, giving you time to eat a nice meal before or after (or before AND after). You may want to consider one of the area's restaurants: Seaford: Bon Appetit -- excellent white linen French restaurant (really excellent!); Dona Maria's Pupusaria; Abbott's on Broad Creek in nearby Laurel; and Heritage Shores in Bridgeville.

In Georgetown, right on the circle near the old courthouse, is The Brick Hotel, Restaurant and Tavern, an historic property and excellent fine dining restaurant. There's also Patty's Deli, a great gourmet sandwich shop, and for brew fans, 16 Mile Brewery.

Finally, the area has many wonderful antique/vintage//collectible shops. Check out the itinerary on the Western Sussex County's website here. 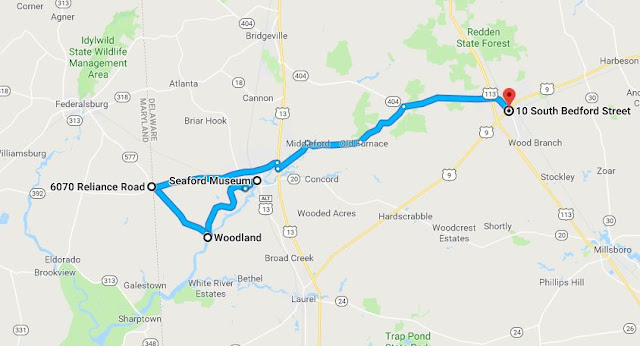