By day, Eastern State Penitentiary is a museum dedicated to educating the public about the history of both the penitentiary itself and incarceration in America. 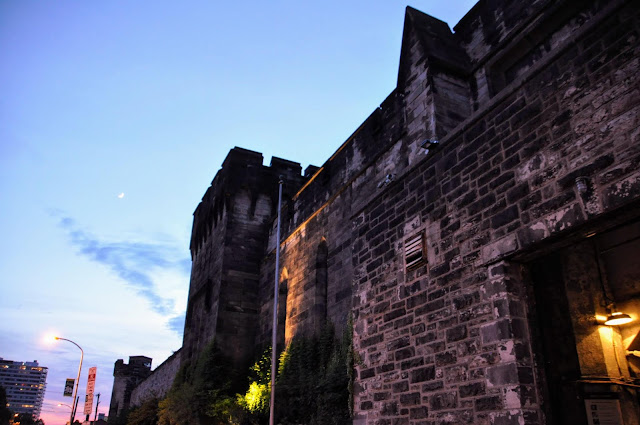 By night, it is a ghost hunter's dream: shadowy figures, mysterious laughter, and footsteps have all been reported. EVPs are not uncommon. (EVP stands for electronic voice phenomena -- the process of seeing or hearing a dead person or people through the use of modern electronic devices.) 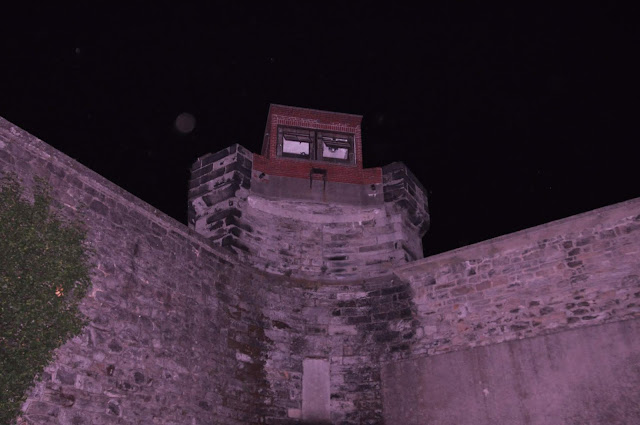 For $110 a person, you and your group (six person minimum) can rent out Eastern State Penitentiary to conduct your own ghost hunt. Intrigued, that's exactly what we did recently: 10 friends and I spent an evening (from 9 p.m. to 1 a.m.) exploring the facility -- essentially all the stabilized areas -- accompanied by three volunteer staff. 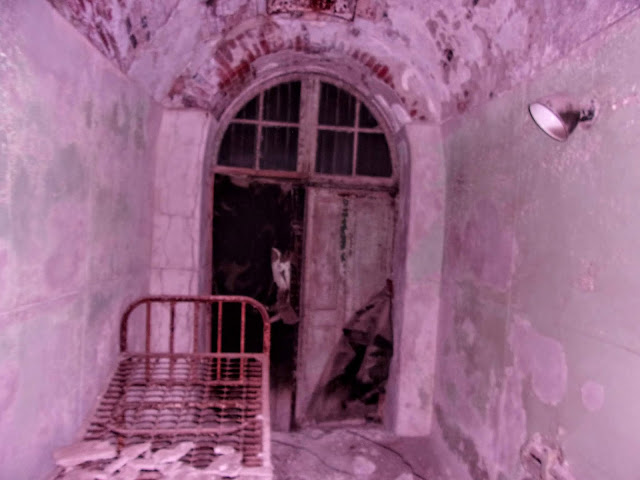 The fees are used to help support the restoration and stabilization of the prison. The fees are actually less expensive (if you can round up a group of at least six) than going through one of the ghost hunt organizations.


Being strictly amateurs, we only had cameras, dowsing rods, an evp recorder, and EMF meters. (Okay, so two in the group actually knew what they were doing.) An EMF meter is a piece of hunter equipment that measures electromagnetic fields, thought to be given off by spirits.

We gathered at the penitentiary just before 9 p.m., when staff came out to unlock the gates and let us in. In the old warden's office, they went over a few house rules: no alcohol, must stay together in one or two groups, be careful when leaning against the walls as the facility itself is still quite fragile, etc. We signed waivers that indicated that if anything bad happens to us, we'll give up our respective first born children, etc. This room is also air conditioned -- probably the only room in the facility that is air conditioned -- and had water and charging outlets for us if needed.

Before beginning the ghost hunt, we held a protection ceremony -- nondenominational -- that had us envisioning protective bubbles around us.

We didn't have a plan -- it helps if you have a plan -- but since we had taken a tour of the penitentiary earlier that day, we knew we wanted to hit a few key spots: the hospital wing, death row, the women's cell block. Beyond that, we figured we'd try a few places and go where it was most active.

We started in the hospital wing and in the surgery. The facility was dark, except for the lights of our flash lights. At first, we didn't get much response. We ensured everyone in our group had opportunities to ask questions in the hopes of garnering an EVP. We also tried the dowsing rods. Much of a ghost hunt is passive. You ask questions, wait a few seconds for a spirit to respond on your recorder, which you'll listen to much later; you take photographs, which you go over long after the ghost hunt is over. Dowsing rods are more interactive: you ask a question, indicating to the spirit to respond by crossing or straightening the rods. They can use the rods to point. 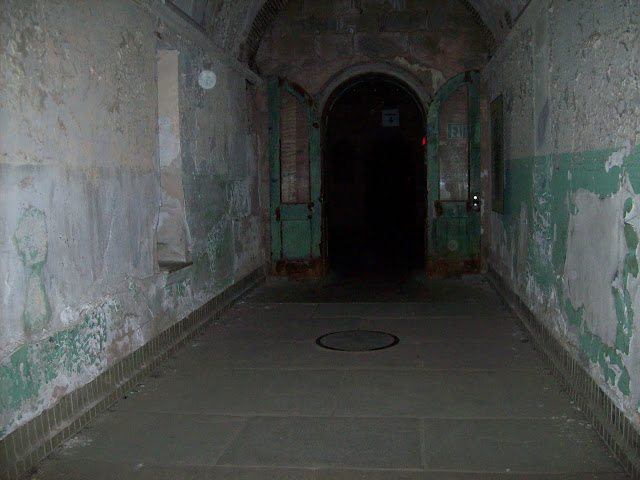 It's been my experience on the several ghost hunts I've been on, that the dowsing rods will respond to a particular person. That person has often been me, but not this time! So I handed over the rods to other members of the group. The art of dowsing has been around for centuries, perhaps even thousands of years. It is the oldest form of divination known and has been used for a variety of different reasons, including searches for underground water, discovering the location of unmarked graves, and even locating and communicating with ghosts. From my childhood, I remember that the guys who drilled the well for our house employed a dowser to locate a likely spot.

How dowsing actually works remains a mystery. Even the American Society of Dowsers admits that “the reasons the procedures work are entirely unknown.”


We captured some photos with orbs in them -- several of those are with this article. The EMF meters lit up quite a few times during the evening. The dowsing rods indicated presences, including of a female inmate who may have murdered her husband, and an inmate who had served in WW I. It was pretty random and often surprising.

What should you expect during a ghost hunt? Those ghost hunting shows are NOT what you can expect. Ghosts aren't performing seals or trained dogs. There's no tricks on command. There's a lot of nothing, to be honest -- we didn't see any full-body apparitions or caped shadow figures chasing us down the cell blocks. Unlike our experiences at the Moundsville Penitentiary, we didn't hear miscellaneous knocks and bangs. There was, however, a lot of waiting for something to happen. It was even a bit boring at times (I'm not known for my patience.) But, when something DOES happen, then it's really amazing. Afterward, there's a lot more waiting.

You'll also get dirty. Ghost hunting tends to take you into buildings that have long been abandoned, like Eastern State. You'll see bugs. I was sitting on the floor in the hallway of one of the cell blocks until we saw a huge cockroach, the size of our fists (size may have been exaggerated by my proximity to the beast). If you're ghost hunting in the summer, bug spray is a must. That won't dissuade the cockroaches, but it will deter the flying biters.

But for all that, exploring the unknown and unknowable is exciting and fun, especially when you're with a great group of like-minded friends.

Although it goes quickly, four hours is long enough to conduct a ghost hunt. By 1 a.m. we were tired and beat, and I think the ghosts were too. It was time for all of us to slumber in our beds.

The end of a ghost hunt is actually the beginning of the work. Photos need be scanned and analyzed. Recordings, if you took them (as we did), need to be listened to and re-listened to. We caught various orbs (or bugs or dust), and some unusual things on the photos. We also caught some interesting EVPs. When the dowsing rods led us out of the operating room and down the cellblock where sick inmates were held, we stopped by a cell the rods had indicated to stop at. This is when we asked for a spirit to touch the green light to let us know they’re done talking. What sounds like “mother****er” is said after one member of the group speaks. We also caught a screeching EVP as we were heading outside on our way to Death Row.

Would I go on another ghost hunt? Heck yeah. I'm addicted to the excitement, the mystery of the unknown, the potential for experiencing the paranormal. 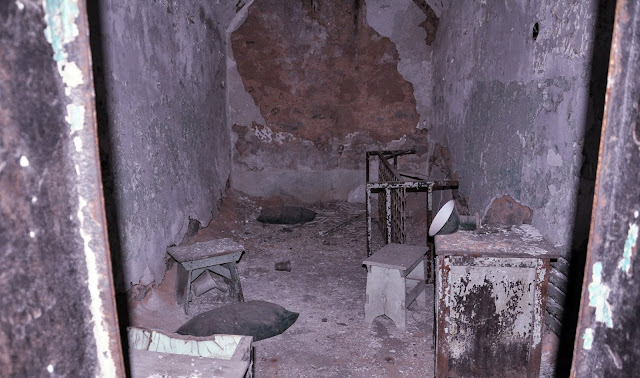 Getting there: 2027 Fairmont Avenue, Philadelphia, PA

Hours: For information how to reserve Eastern State for your own ghost hunt, please check the website. 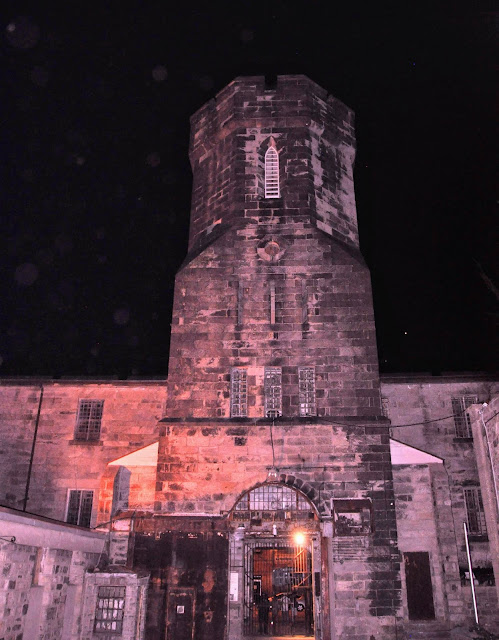