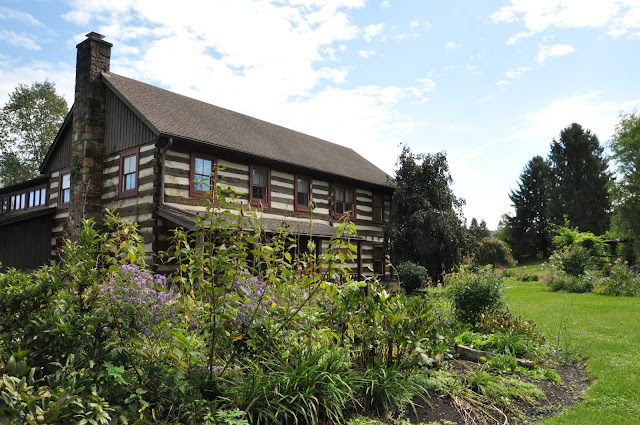 This is one of those daytrip surprises I often end up writing about! I was on my way from one daytrip destination -- Fort Ligonier -- and on my way to another destination (Nemacolin Woodlands Resort), when I passed by this log house. Then I noticed the sculpture in the garden, and happened to see the art museum's sign. That's really all it took. I turned around to go visit! This art museum is part of the Southern Alleghenies Museum of Art (SAMA), which has five locations, one of which is in Ligonier.

The SAMA Ligonier Valley Museum is modeled on an authentic log cabin design that reflects the historic community and is surrounded by numerous flower gardens that host primarily by Josefa Filkosky. The Walter Carlyle Shaw Paperweight Collection is on permanent display in a custom installation that frames the exhibition gallery. 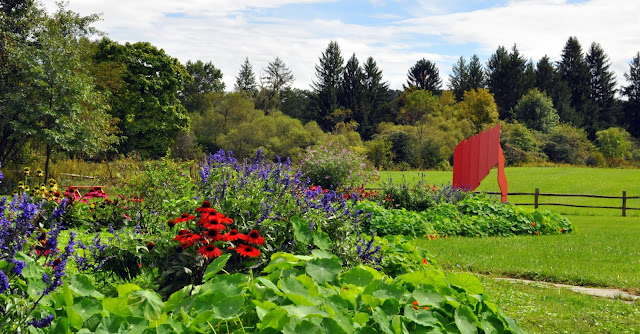 SAMA is a community art museum founded in 1976. SAMA consists of five museum facilities in the central and southwestern Pennsylvania cities of Altoona, Bedford, Johnstown, Ligonier and Loretto. With a permanent collection of more than 4,500 works by local, regional, national and international artists (works by prominent national artists such as Will Barnet, William Baziotes, Albert Bierstadt, Mary Cassatt, Walt Kuhn, Thomas Moran, Gilbert Stuart, Thomas Sully, and Andy Warhol are counted among its holdings), SAMA maintains a repository of western and central Pennsylvania’s contributions to American art and boasts a strong catalogue of local and regional arwtists including Franklin Dullin Briscoe, Frederick Counsel, George Hetzel, and William H. Rau.


We visited during the "Doreen Currie: Plein-Air Paradigm" exhibit, which was on view August 17 through November 4 2018, and featured more than 60 oil paintings by the Latrobe artist. The museum rotates its exhibitions, so there's reason to return!

A fourth-generation Latrobe native, Currie lives on a portion of her great-grandfather’s farm. She grew up with a deep love of the local landscape, which is evident throughout her artwork. She spent much of her childhood exploring and practicing her artistic skills, and later studied art and design at Seton Hill University. In 2004, she transitioned from watercolor to oil as her primary medium, which also sparked an interest in painting en plein air or, painting outdoors.

If the weather cooperates, Currie can likely be found, paintbrush in hand, along some country road. A pleasant day for her begins with grabbing her French easel and packing her backpack with turpentine, linseed oil, brushes, paints, and a small sketchbook. Since acquiring a second residence in Fenwick Island, Delaware, she has begun to paint life at the beach.

Doreen studied graphic art and design at Seton Hill College in Greensburg Pennsylvania and early in her career created landscapes and still life paintings using oils and acrylics. She later transitioned to watercolor media and has studied with many well artists of renown. Being able to switch from one media to another, depending on the subject gives more painterly freedom to the artist. She is more interested in ascribing feeling into a painting than a painting a perfect rendition. She feels one remembers a painting because of how it makes you feel rather than what it describes.

After you enjoy the exhibit (and by the time this was published, the artist being featured has changed), head outside. Not only are the gardens exquisite, but there the sculpture there is worth your time. With the scenic valley as a backdrop, the walk, although brief, is refreshing and lovely!
Getting there: 1 Boucher Lane & Route 711 South Ligonier, PA 15658 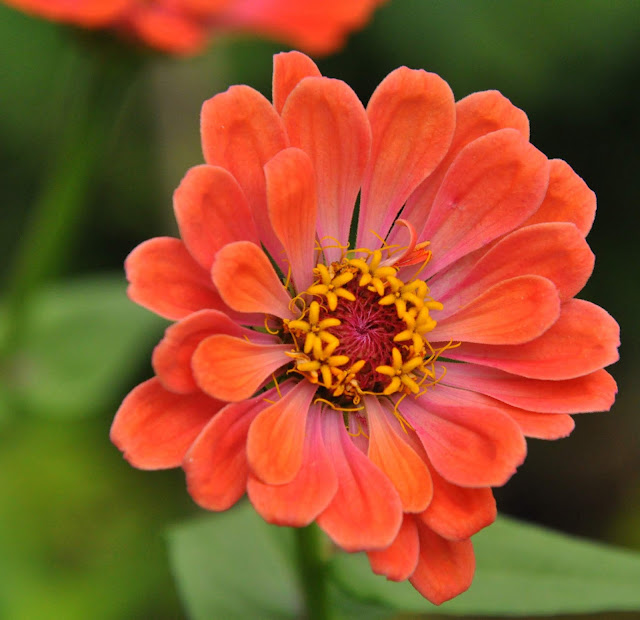 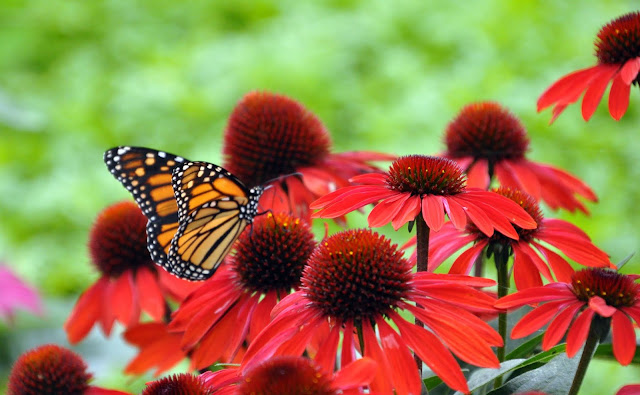