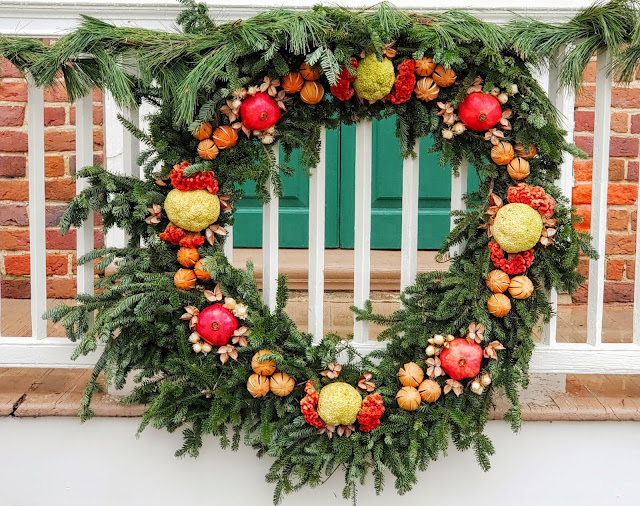 Many visitors come to Williamsburg in December specifically to enjoy the Christmas decorations and wreaths. 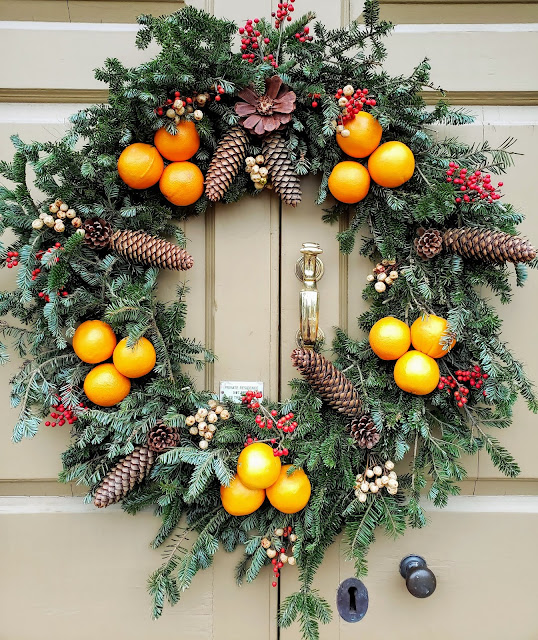 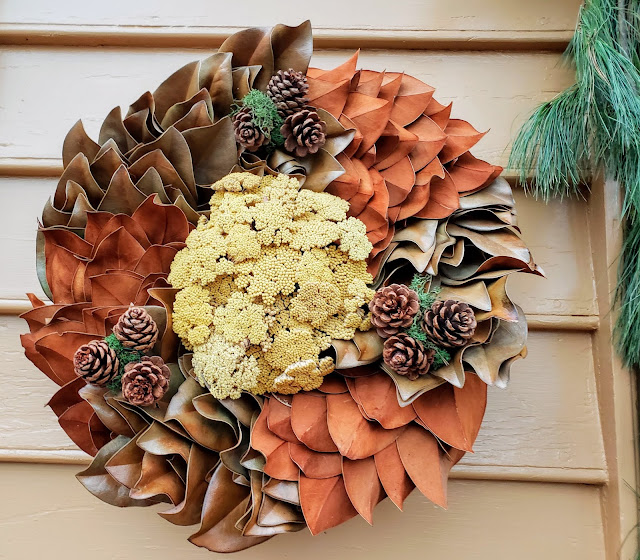 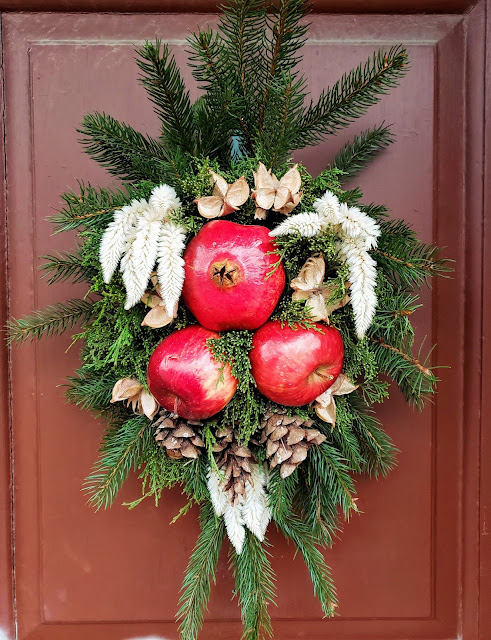 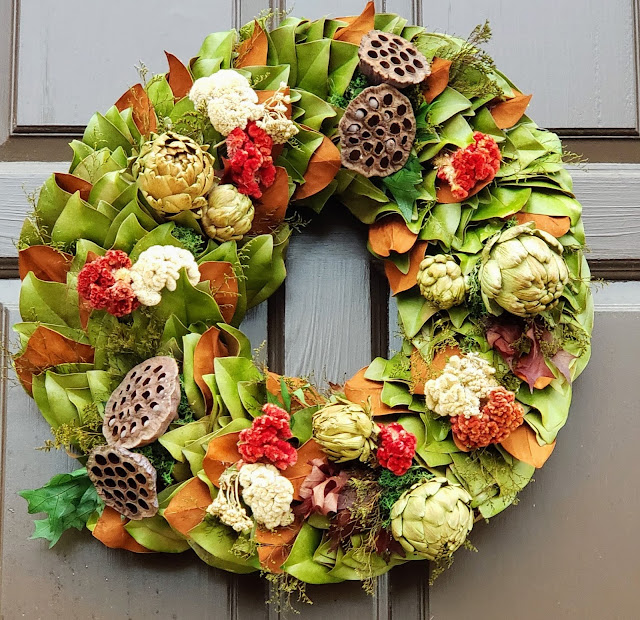 A walk down the main thoroughfare of the town -- Duke of Gloucester Street -- reveals dozens of beautiful wreaths, garlands, and window decorations. There are an estimated more than 2500 of them throughout the historic town. 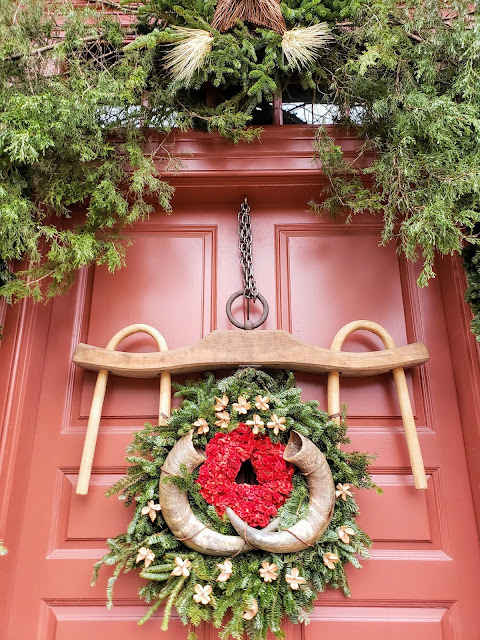 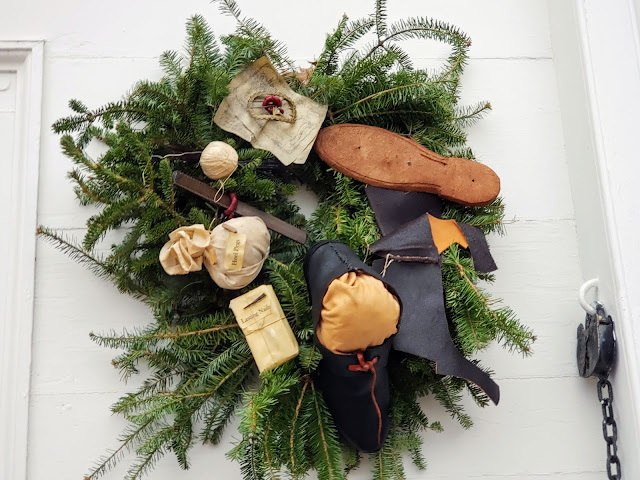 Mostly natural items adorn the wreaths, usually on a base of evergreen foliage, although sometimes on vines. Often a wreath reflects the business it adorns -- tin cups and playing cards for a tavern, a bag of flour and spices for a bakery. 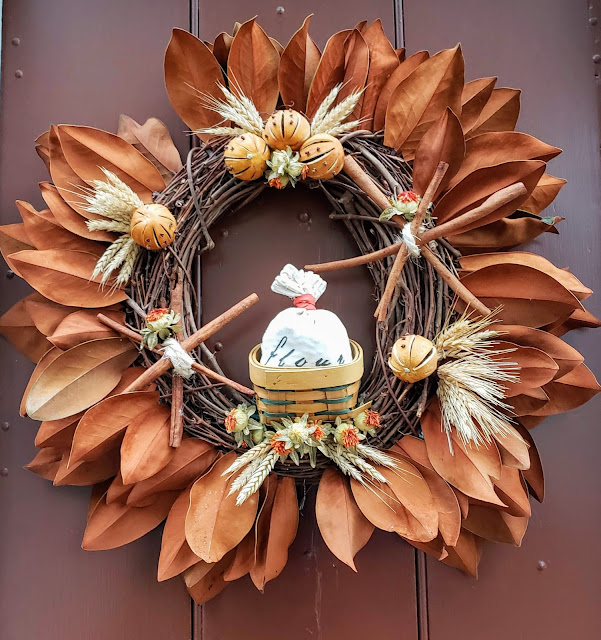 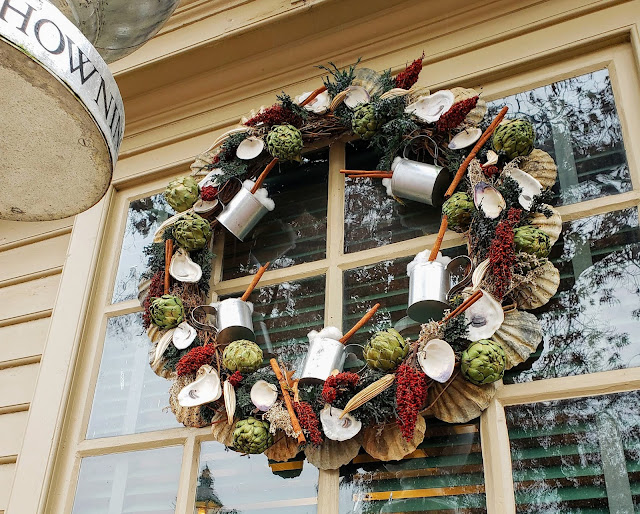 The irony is that Colonial Williamsburg's Christmas wreaths wouldn't have adorned the doors and windows in colonial times. No, these wreaths cater instead to modern-day conceptions of what colonial Christmas should look like. This is a modern tradition, albeit inspired by an idealized colonial look. 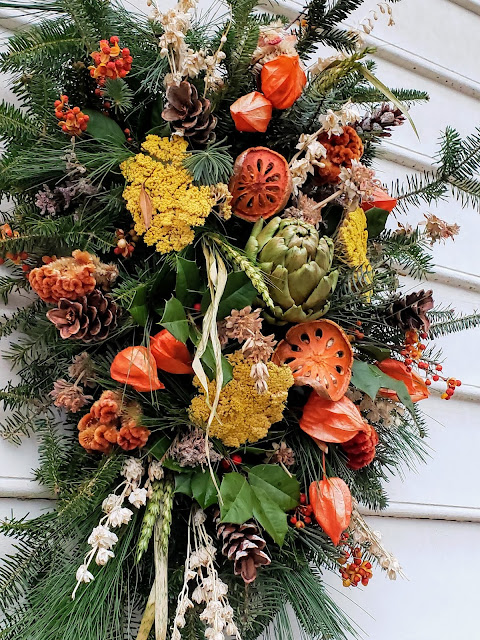 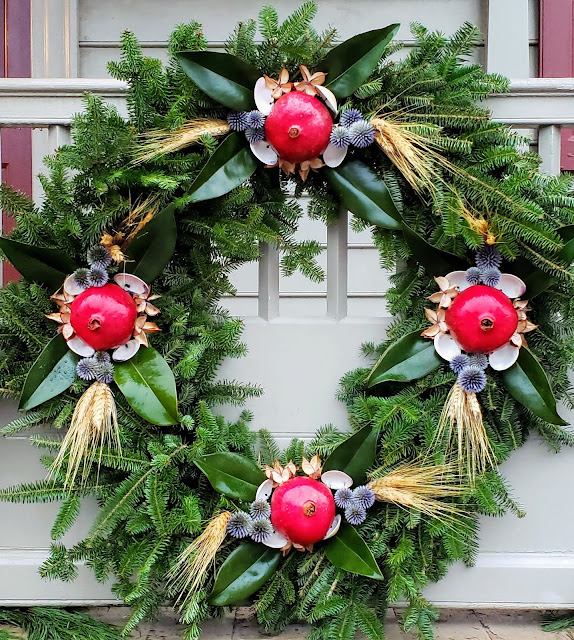 In fact, decorations during colonial times were pretty minimal: Virginia colonists displayed freshly cut holly, pine, and mistletoe inside their homes but probably didn't decorate the outside. Christmas was a religious celebration, not the insane race to decorate trees, houses and yards that Americans embrace today. 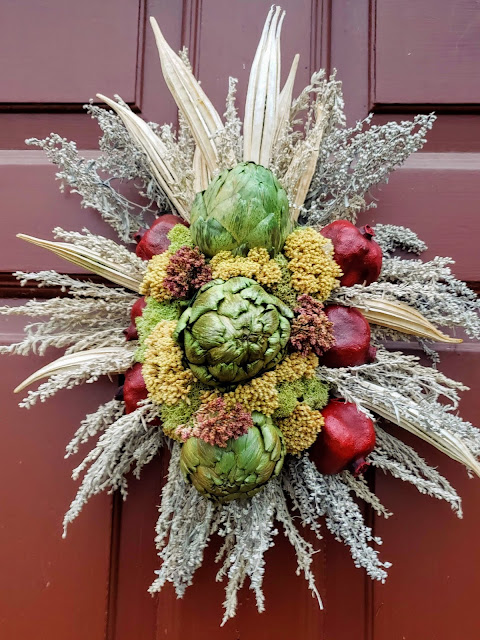 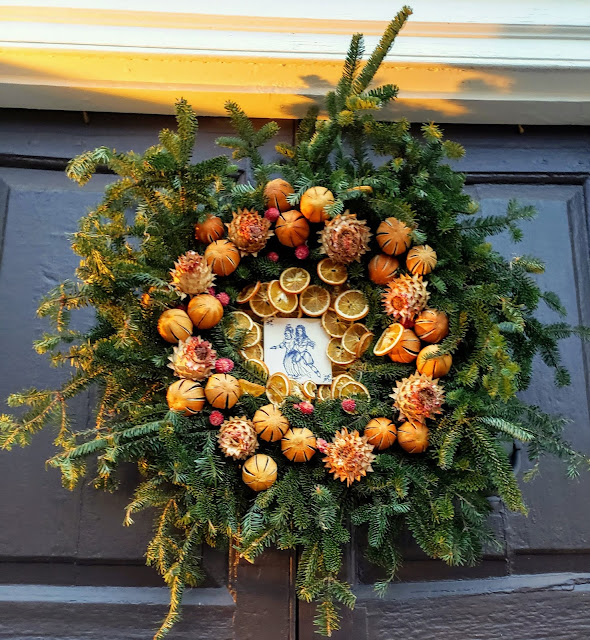 Williamsburg Christmas wreaths have been a tradition since the mid-1930s, soon after philanthropist John D. Rockefeller Jr. and his wife, Abby Aldrich Rockefeller, joined with the Rev. William A.R. Goodwin, pastor of Bruton Parish Church in Williamsburg, to begin restoring the town to its Colonial appearance. Not only was the importance of Christmas as a holiday growing, the country was undergoing a "colonial revival," re-embracing decorating trends that evoked the 1700s. Colonial anything was in vogue in the 1930s. 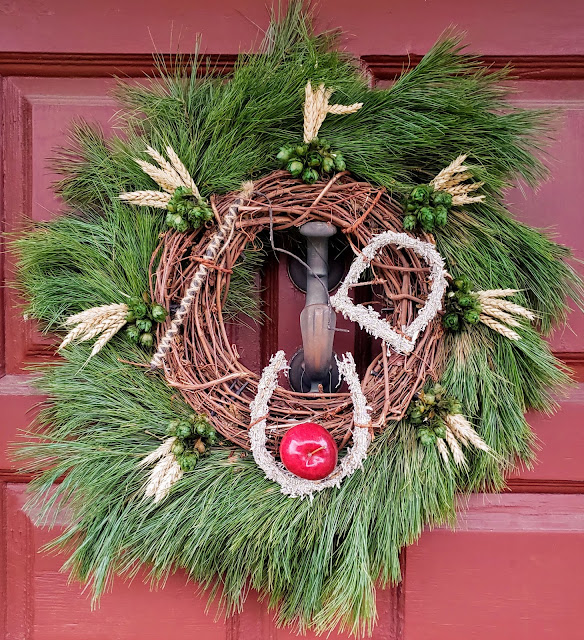 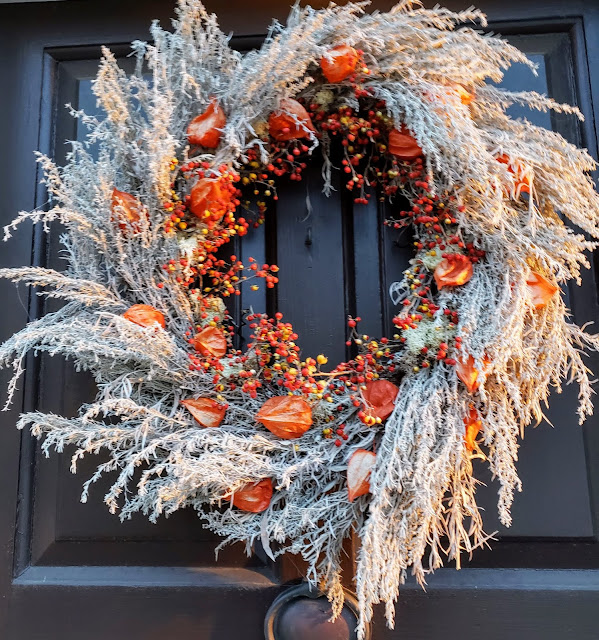 But forget about twinkling lights. Instead, the wreaths and other Christmas decorations in Williamsburg are inspired by English traditions depicted in 18th-century paintings and prints that show greenery tucked in vases or window frames. 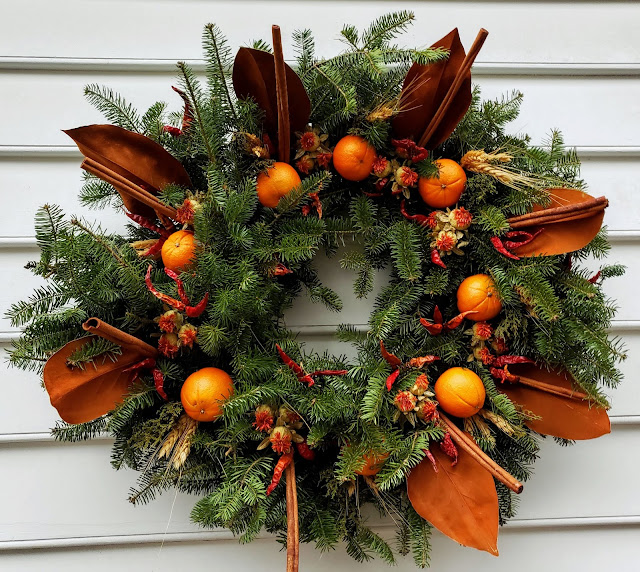 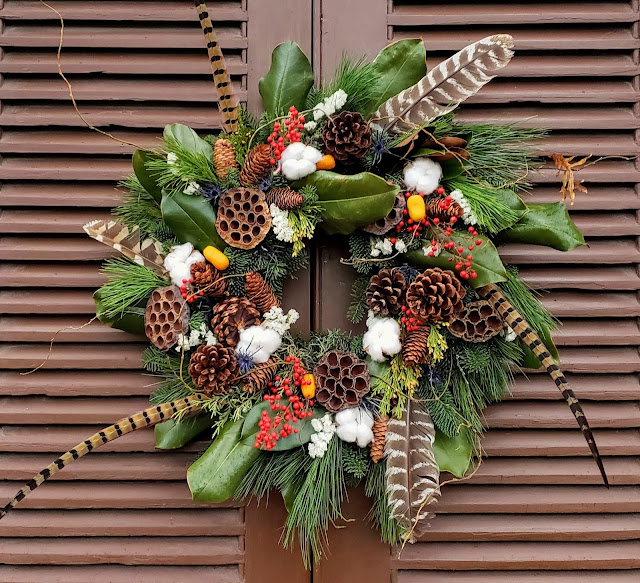 Today's wreath designers focus on using mostly natural items that colonial inhabitants would have been familiar with: fruits such as apples, pomegranates, pineapples, and oranges; leaves from magnolia trees or other native foliage; herbs and spices; dried flowers; okra pods, pinecones and lotus seedpods; shells from nearby James River; and bird feathers. Colonists would have been astonished that the fruits, herbs and spices would be put outside where squirrels and not people could feast on them. (Don't worry, however, that the squirrels will eat the wreaths -- many are sprinkled with hot pepper to discourage the voracious critters.) 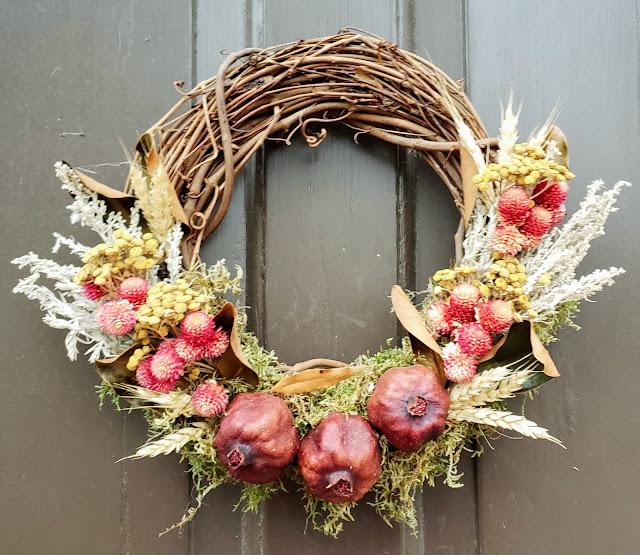 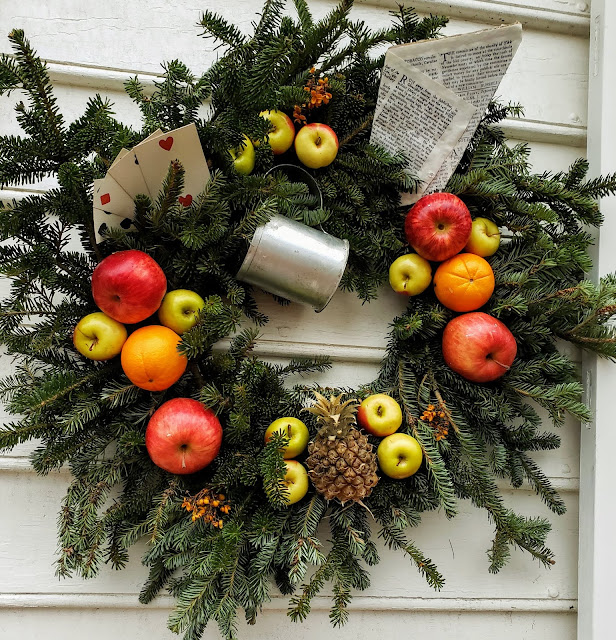 In 1936 Williamsburg decorated for Christmas for the first time, using simple evergreen garlands and wreaths. The more ornate Christmas wreaths tradition can be traced back to a Mrs. Louise Fisher, who, when placed in charge of flowers and Christmas decorations, drove to the Library of Congress where she turned up English and American pictorial examples from the period to use as guides. 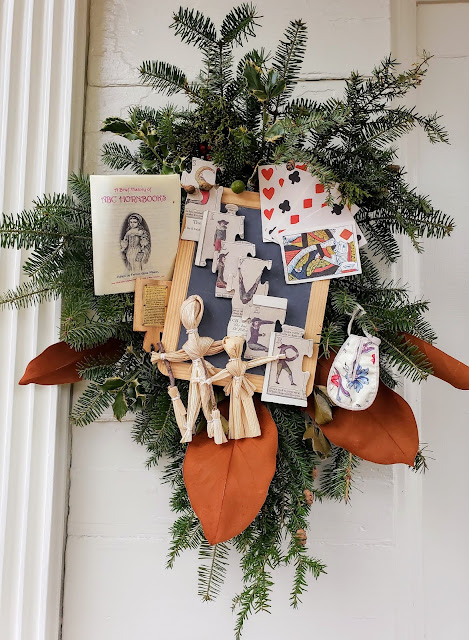 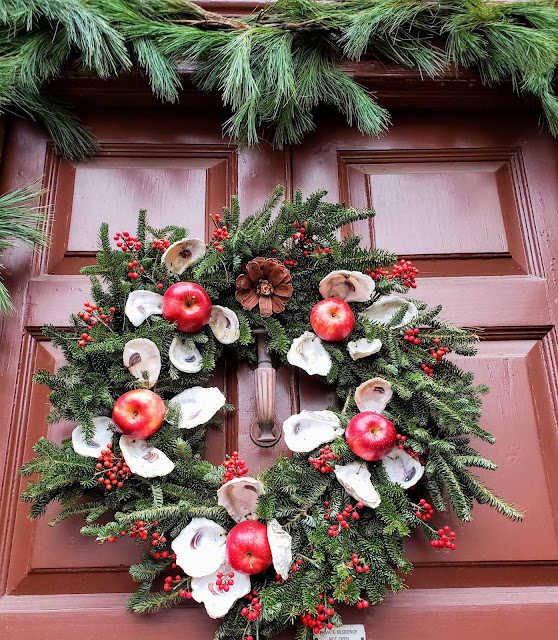 By 1939 her wreaths were attracting quite a bit of attention in magazines such as Good Housekeeping and other decorating magazines, and the "Williamsburg Christmas look" was launched. 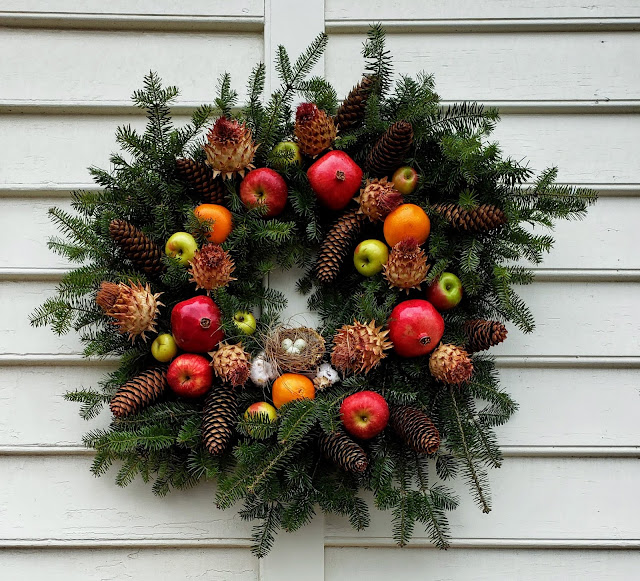 The decorations go up right before Thanksgiving, lasting until January. At the visitors center, you can also purchase tickets for an event that discusses Christmas traditions in Colonial Williamsburg as well as a walking tour that brings you to where all the best wreaths are and reveals some of the secrets behind the Williamsburg Christmas wreath tradition. There are also other holiday themed discussions and tours. 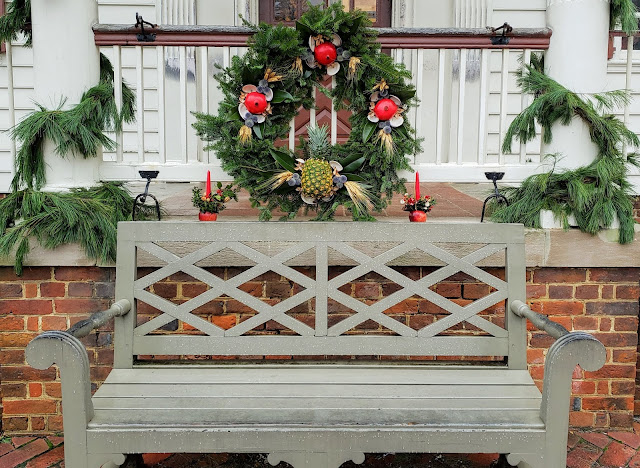 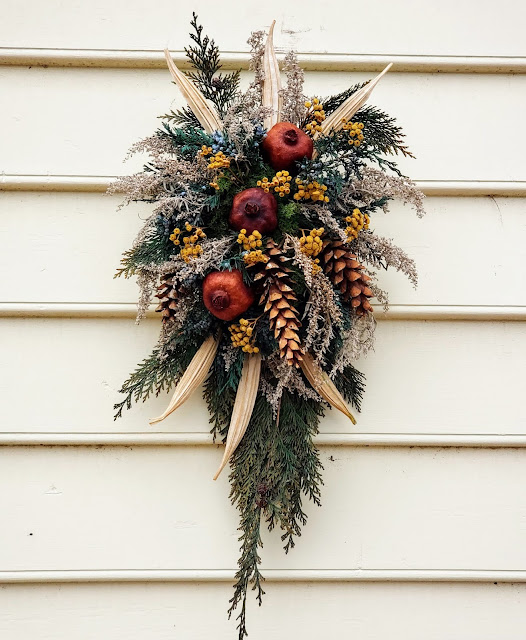 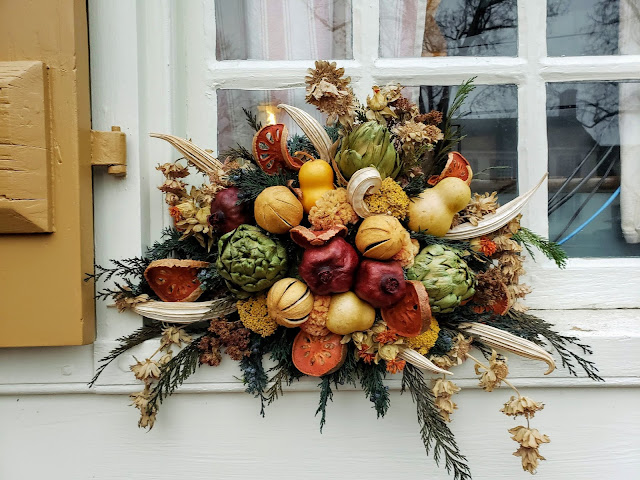