Alexandria, VA is a city steeped in African-American history since its founding in 1749, but much of this history has become hidden over the years. Forgotten burial grounds, a former slave jail, and the Alexandria Black History Museum will help start your journey to discover Alexandria's hidden history.

In 1790, when the first federal census was taken, 52 free blacks lived in Alexandria. This population increased dramatically to 836 by 1820 and continued to expand until 1846 when Alexandria retroceded to the Commonwealth of Virginia from the District of Columbia. Alexandria's black population began increasing again after 1860 and reached 5,300 by 1870. Prior to the Civil War, Alexandria was also home to one of the largest slave-trading operations in the country. In the 20th century, American’s first Sit-Down Strike took place at the Alexandria Library, ushering in the very early days of the Civil Rights movement. But this incredible history has quietly disappeared over the years, forgotten as progress and new buildings -- or new uses for very old buildings with some incredibly dark history in them -- have glossed over the landmarks of Alexandria's hidden, African-American history.

Below are my recommendations to start discovering Alexandria's rich African-American history:


The park includes a one-acre 19th century African American cemetery. Of the more than 20 burials on this site, six identified headstones remain and are in their original location. The park was designed to co-exist with the original landscape of the cemetery and preserves the interesting and varied plant life on this site. 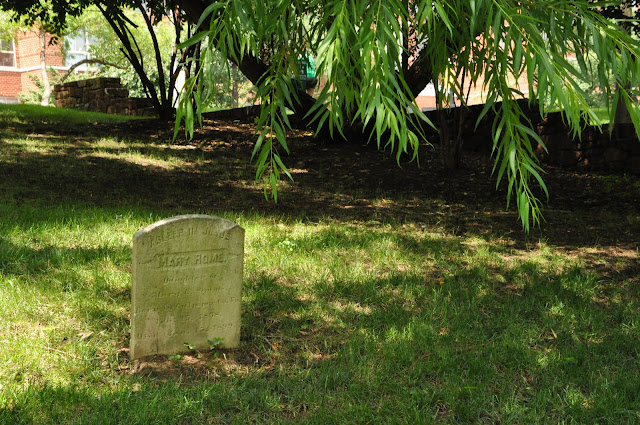 In 1885, the Silver Leaf (Colored) Society of Alexandria established the Black Baptist Cemetery just west of the Alexandria National Cemetery. (The Silver Leaf Society was one of several burial associations organized by African Americans in the late 19th century. Burial society members paid regular premiums to ensure that upon their deaths they would have a casket, funeral and final resting place.) At some point the Black Baptist Cemetery was abandoned and in the mid-20th century, the area was used as a landfill. 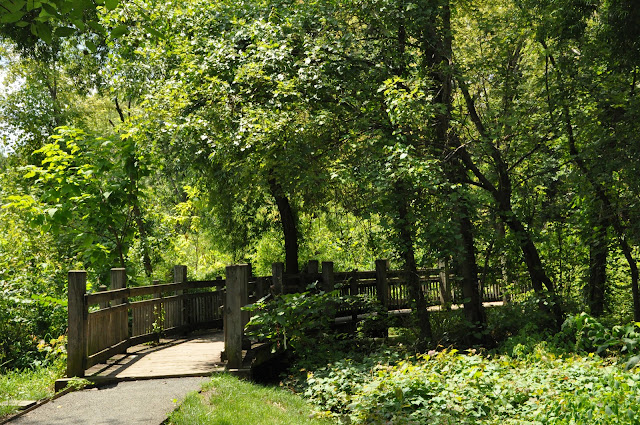 Development plans in the 1980s and 1990s prompted Alexandria city officials to have archaeologists study the site. The subsequent discoveries of headstones, footstones, and coffin fragments and hardware revealed the site’s history as a burial ground and ultimately led to its protection. 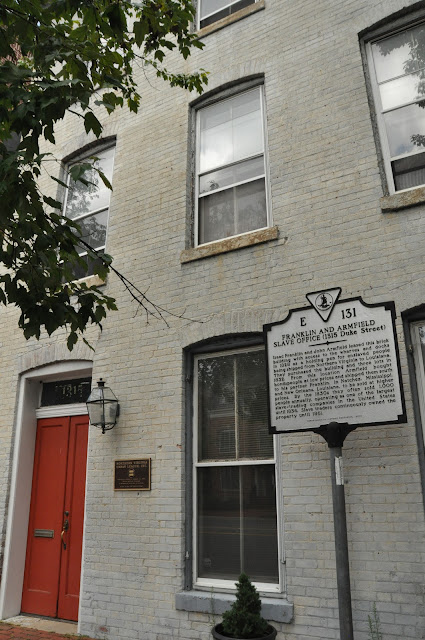 The building, which looks like an unassuming townhouse, served a more nefarious purpose. This building served as the headquarters for one of the largest slave-trading companies in the country, Franklin and Armfield; enslaved individuals were held in squalid conditions in the basement and surrounding property. It is estimated that as many as a million enslaved individuals passed through Franklin and Armfield between 1828 and 1861, on their way to Mississippi, Alabama, and Louisiana. Brick from the holding cells were re-used after the Civil War to build adjacent townhouses. (Don't even try to tell me those homes are not haunted.)


The Northern VA Urban League, whose headquarters is also here, developed the Freedom House Museum at the site to preserve the story of the men, women and children who passed through this horrific place.

The museum is emotional. You enter the basement, going down a narrow flight of stairs. It is dark and just a little frightening. On the right you pass by original metal bars. The exhibits and descriptions step you through the conditions that made slavery profitable, conditions enslaved people endured, the business ventures of Franklin and Armfield, and personal stories of some of their victims.


In the stunning true story told in the major motion picture, "12 Years a Slave," free black man Solomon Northup is kidnapped and sold into slavery, where he subsequently spends an agonizing 12 years enslaved. James Burch (Birch), the DC-based slave dealer responsible for selling the real Northup into slavery, would go on to become one of the last owners of one of the largest slave trading companies in the country, Franklin and Armfield in Alexandria, from 1859 to 1861.

Getting there: 1315 Duke Street, Alexandria VA. There is extremely limited parking right in front of the museum.
Hours: Saturdays and Sundays, 1 - 5 p.m.
Website: https://www.visitalexandriava.com/listings/freedom-house-museum/6053/ 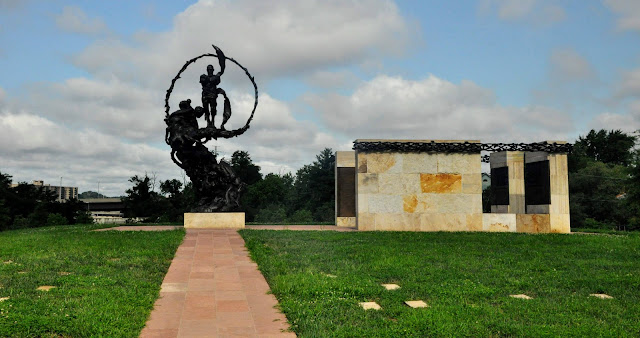 Those escaping from enslavement found a safe haven in Alexandria because of the Union occupation in 1861, but their large numbers resulted in a refugee crisis. While many found employment, other contrabands, as the freedmen were officially known, were destitute, and arrived hungry and in ill health. Many individuals were housed in crowded barracks, where disease was rampant. 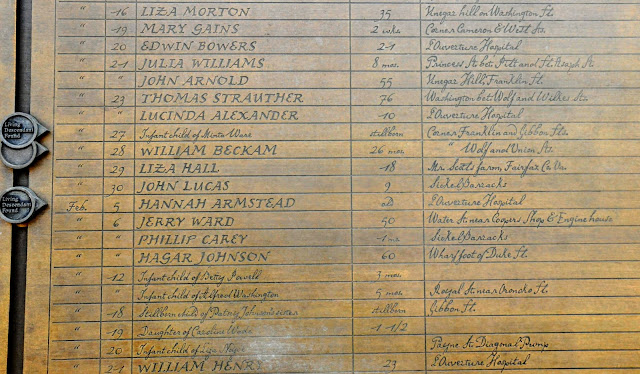 In 1864, after hundreds had perished, a property on the southern edge of town, across from the Catholic cemetery, was confiscated for use as a cemetery. About 1800 freed blacks were buried at the site, as well as some black Union soldiers, who were eventually moved to nearby Arlington National Cemetery in 1864. 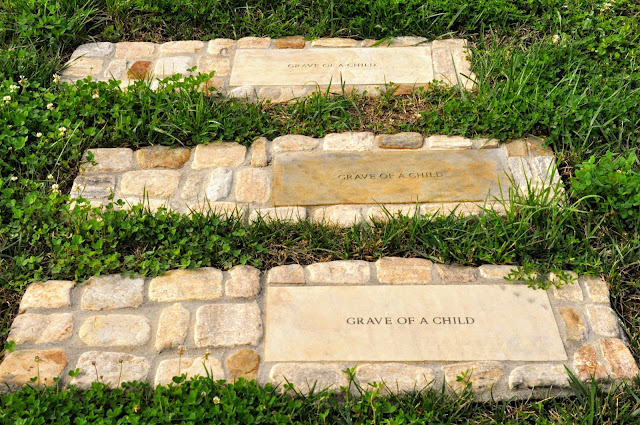 Despite its use as a burial ground during the Civil War and the Union occupation of Alexandria in 1861, the cemetery became forgotten over the years as it fell into disrepair. A brickyard and railroad cutting encroached on its edges. The cemetery appeared on maps until 1939, but by then there was little remaining above-ground evidence of the burials.


In 1955, a gas station was built on the property, followed by an office building. In 1987, an effort began to save the site when historical research revealed the site's history. In 2014, the cemetery opened to honor the memory of the Freedmen, the hardships they faced, and their contributions to Alexandria.

Note: Parking is not easy; you'll have to look for a space in the nearby neighborhoods.

No trip exploring Alexandria's African American history would be complete without a visit to the Black History Museum. While I was there, an interesting and imaginative -- and kid-friendly -- exhibit of dollhouses was being featured. 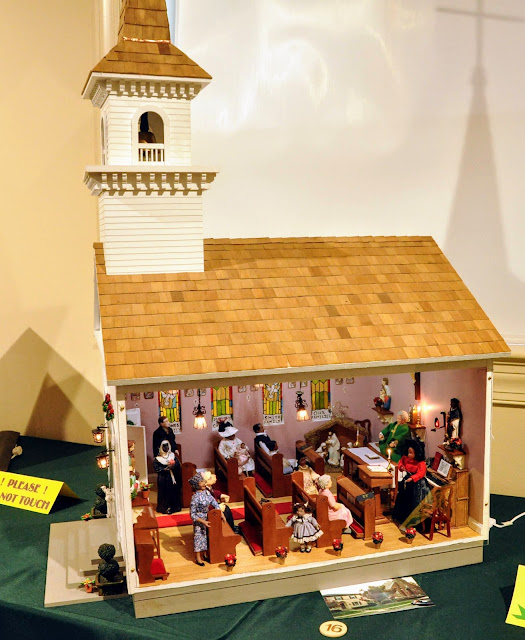 "Our Alexandria," the Sharon J Frazier and Linwood M. Smith Dollhouse Collection, features African American-themed dollhouses capturing many of the now forgotten businesses and people who were important to Alexandria’s vitality and development in the last century and show the strength and importance of Alexandria's black culture and history. This exhibit was open June through December 2018.

Artist Sherry Sanabria’s African American historic site paintings are on display in the Museum's Robert Robinson Gallery. At first I was struck by the beauty of the paintings, but then my reaction turned to horror. These paintings are part of Sanabria’s “Sites of Conscience” series, which takes viewers to places of horror, places of pain and suffering, places we want to forget, but never should.

Note: Parking is not easy; you'll have to look for a space in the nearby neighborhoods.