Most of us possess at least a basic understanding of the Civil War Battle of Gettysburg, fought July 1-3, 1863. Union Maj. Gen. George Meade's Army of the Potomac defeated attacks by Confederate General Robert E Lee's Army of Northern Virginia, effectively rebuffing Lee's invasion of the North. There were up to 51,000 casualties from both sides -- the most costly in U.S. history -- and from this battle arose then President Lincoln's famous Gettysburg Address when he traveled to Gettysburg the following November to dedicate the National Cemetery. In combination with the fall of Vicksburg on the western theater the following day, the Battle of Gettysburg is considered the "turning point" of the Civil War. From there on, it appears to us now, for the Confederates, it was a losing war.


It's worth noting that to really understand the battles, you should walk the battlefield. Visitors to the Gettysburg National Battlefield spend most of their time driving, rather than walking, the battlefields, and thus miss the significance of landmarks and geography on the fighting. From a car or bus, a "ridge" seems merely a bump. But things look different from the ground.


After visiting the Visitors Center museum and the famous Panorama, we hiked from the Visitors Center to Cemetery Ridge to see the battlefield from the viewpoint of the Union troops who defended it, to try to understand how the landscape played into the outcome of the battle, and to walk in the footsteps of the men who struggled there.

It's difficult high-level summarize the Battle of Gettysburg, but here goes: the Union Army got to Gettysburg first, and thus claimed three ridges west of town (anticipating that the bulk of the Confederate Army would come from the west, as it subsequently did). This delayed the Confederates on the first day of the three-day battle just long enough for Union reinforcements to arrive and occupy strong defensive positions south of town at Cemetery Hill, Cemetery Ridge, and Culp's Hill on the evening of July 1 and the morning of July 2. Confederate reinforcements also arrived. By the end of the first day's fighting, these three positions formed the Union lines; Confederates were arrayed along Seminary Ridge, roughly opposite Cemetery Ridge.


Cemetery Ridge formed a primary defensive position for the Union Army during the remaining two days of battle. Cemetery Hill overlooks the main downtown area of Gettysburg from the south; the hill gently slopes into Cemetery Ridge as it runs south. This area provided a site for Union artillery. At the northern end of Cemetery Ridge is a copse of trees and a low stone wall that makes two 90-degree turns, nicknamed The Angle.

Despite a ferocious attack on the second day of the battle, in which the Confederate troops almost breached the defensive line on Cemetery Hill, Union troops were able to repel the attack and hold Cemetery Ridge. The following morning, both sides engaged in a cannonade that could be heard miles away as hundreds of cannons from both sides were fired off for almost two hours. A massive Confederate artillery bombardment, meant to "soften up" the Union defense, was largely ineffective. Nevertheless, around 2 p.m. that afternoon, Pickett's Charge began, launching from Seminary Ridge. More than 12,000 Confederate soldiers from three divisions marched in a mile-long line across the farm fields. They encountered heavy artillery fire. Fencing and a slow upward incline increased casualties. The line shrank to less than half a mile long as casualties from first the shell and solid shot and then canister and musket fire piled up.


From Cemetery Ridge, Union troops arrayed along the stone fence fired upon the Confederate charge. Gaps opened up on the defensive line, allowing Confederates to reach several cannon -- the "High Water Mark of the Confederacy." The Confedeate troops turned the Union cannon to fire on the Union troops, only to realize there were no ammunition (luckily for the Union). Union reinforcements arrived and charged into the breach. With no senior officers remaining to call a formal retreat, Confederate troops began to slip away individually as they realized the defensive line was impregnable.

The following day, under a heavy rain, the Confederates withdrew. The momentous battle was over. 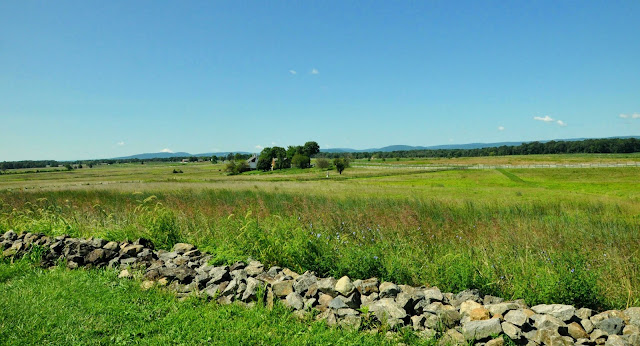 During the ranger-led hike, we spent time at several of the monuments, discussing the significance of the actions of the troops located there. We learned about the Harpers Ferry Cowards -- a brigade who surrendered to the Confederates in a previous encounter at Harpers Ferry -- who redeemed themselves at Gettysburg. We also heard the story of the California Brigade's bravery, in driving back Confederates who temporarily encountered the southern end of the Angle.

For a few minutes, we stood on this hallowed ground, where Union soldiers had stood and fought to preserve a government of the people, by the people, for the people. 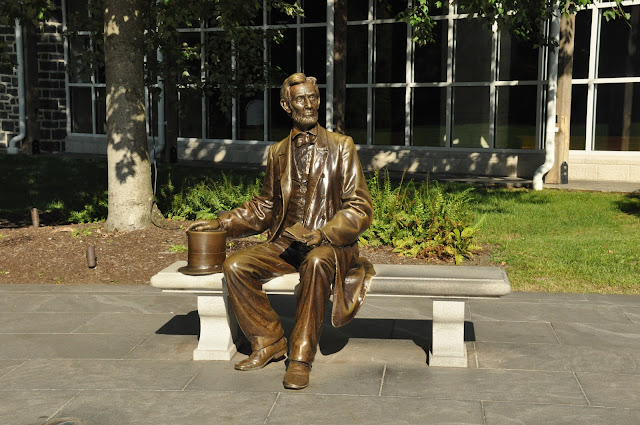