Patapsco Valley State Park is a park strung out like beads on a necklace, extending along 32 miles of the Patapsco River south and west of the city of Baltimore. 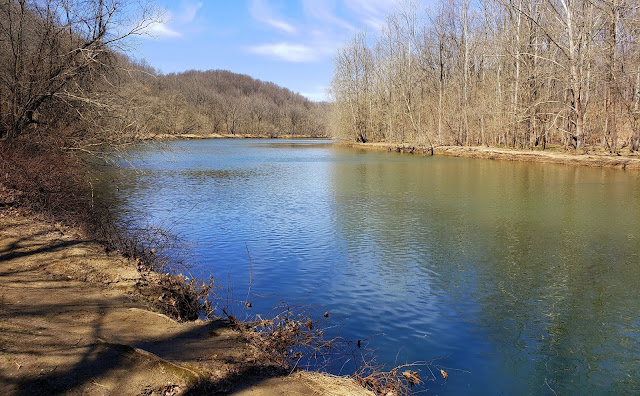 The Maryland Forestry Act of 1906's provisions formed the park, to protect newly completed (and now destroyed) Bloede Dam from silting from nearby farm erosion. Patapsco Valley State Park was established first as Patapsco State Forest Reserve in 1907 to protect the valley's forest and water resources. Patapsco Forest Reserve was soon expanded, as a park, to support suburban development initiatives. As other sections along the river were added, Patapsco Valley State Park became one of the largest parks in Maryland.

Usually I go hiking along old Alberton Road to the abandoned town of Daniels but this time, I decided to check out Daniels Road, which leads to the entrance to the park on the opposite side of the Patapsco River. I found a wonderful new area to explore and a trail that follows a scenic, flat, old railroad bed, offering nice views of the river and rock outcroppings, as well as a bit of mystery. 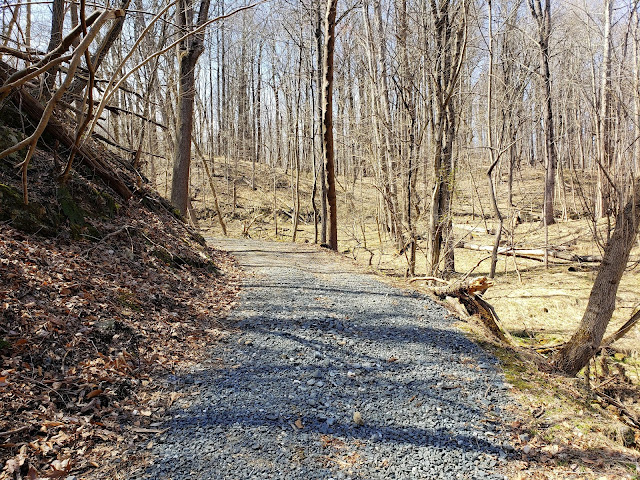 I believe the trail, which looks like an old road bed, was about 5 miles. I ended up following the Old Main Line from the parking lot along the river, continuing along the former railroad bed when another trail veered right to run right along the river. 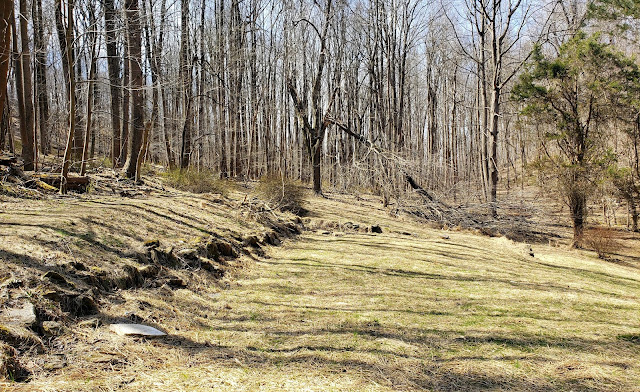 Eventually, the Ruins Trail Loop splits from the Old Main Line Trail, and veers left, heading up the hill. To the right, there were low stone fences, or perhaps these were ruins of house foundations. I am fascinated by the ruins of Daniels, especially those of homes (or which I imagine to be homes). 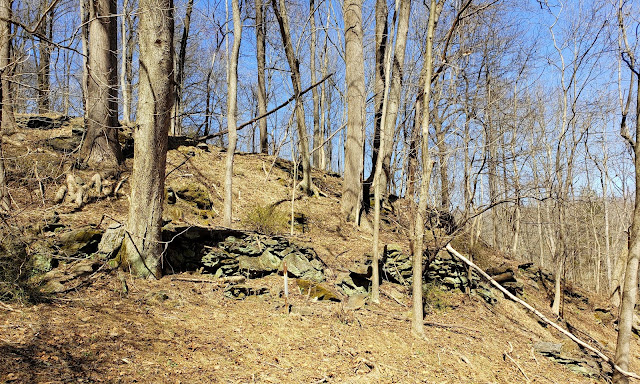 By 1960, the Daniels Mill was at its maximum capacity, and 90 families lived in the immediate vicinity. A few short years later, by 1968, it announced its closure and started demolishing buildings. The mill company's decision to abandon the town likely saved lives, since just four years later, the remnants of Hurricane Agnes, by then "just" a tropical storm, flooded the valley, sweeping away vehicles and bridges, and destroyed many of the remaining buildings.

The housing areas in the valley had interesting names, such as Guilford, Calf Hollow, Lower Brick Row, and Upper Brick Row. Before Hurricane Agnes hit the area, a road bridge crossed the river, connecting the Baltimore County and Howard County sides of Daniels. 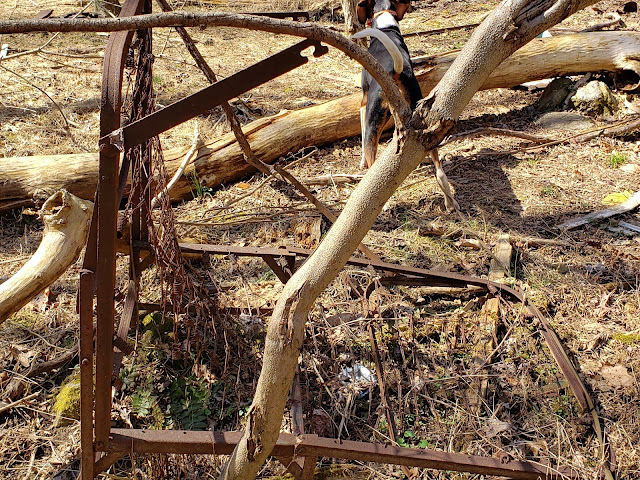 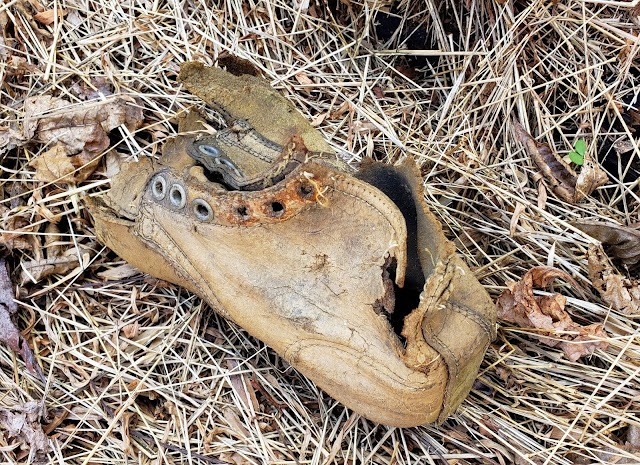 Behind the stone walls, I noticed what seemed to be an old dump, perhaps where a family had tossed and forgotten its refuse. Among the scattered items: an old rusty crock, what looked like a bed frame, or a chair frame? A white pan. An old bicycle.

The items looked old, like what had once graced my grandmother's attic. Did their owners dump them illegally? That seemed unlikely -- the items were too old fashioned. Where they left behind when the old mill town shut down, after the mills closed, or abandoned after Hurricane Agnes in 1972? I wish I knew more about the mysteries of this abandoned town. 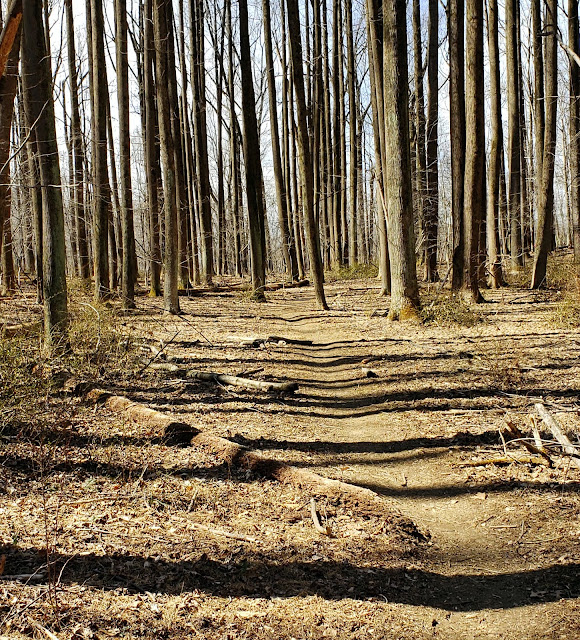 After the trail dwindles to a typical hiking trail path, it soon forks, giving  you three options. Another hiker explained that if you go left sharply, up the hill, you'll get some lovely views of the river and valley below, plus see some ruins, eventually returning to the parking area in a nice loop.

If you go straight, you have a less strenuous climb up to the ridge, but you'll likewise loop back to the parking area. If you head right, you'll pick up the trail that paralleled the Old Main Line right along the river. I saved that for another day, deciding that the sharp strenuous turn left was exactly what I wanted -- I wanted to see those ruins! 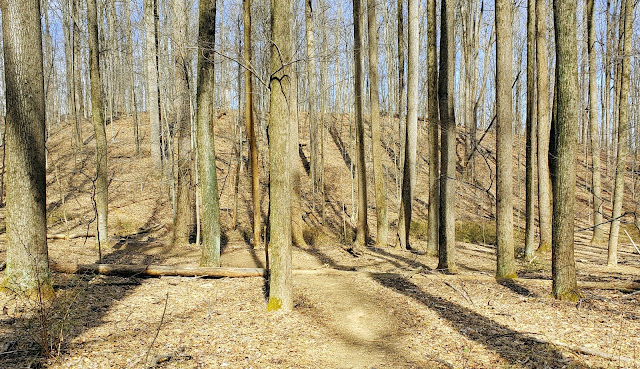 The trail on the left brings you straight up the side of the mountain to the ridge, then turns again left, along the ridge. It was on this stretch, right before the trail turned right to head down the opposite side, that I found a single daffodil. 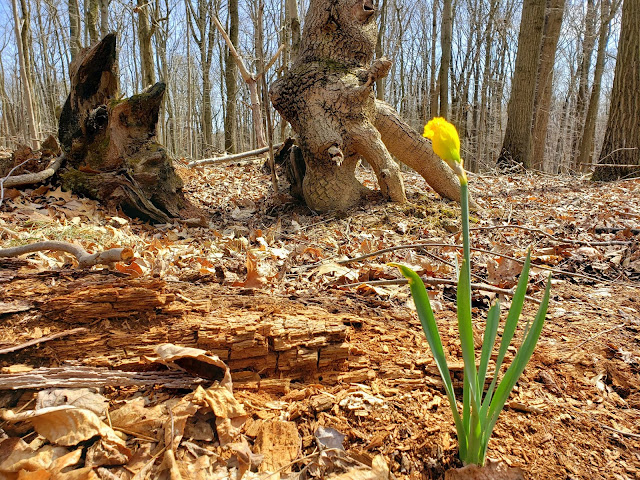 When the trail turns right to head down the ridge, you can choose instead to go straight, continuing along the ridge, with the reward of some lovely views and rock outcroppings. 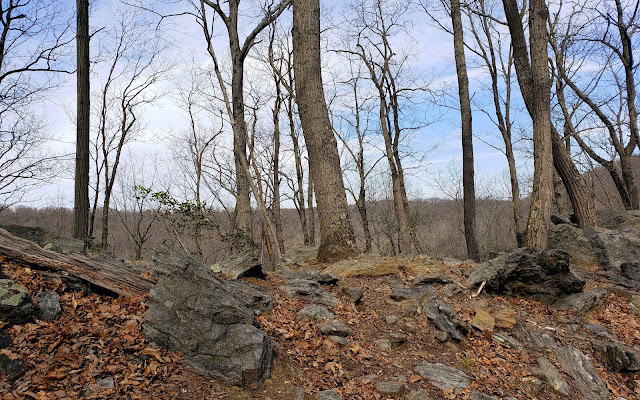 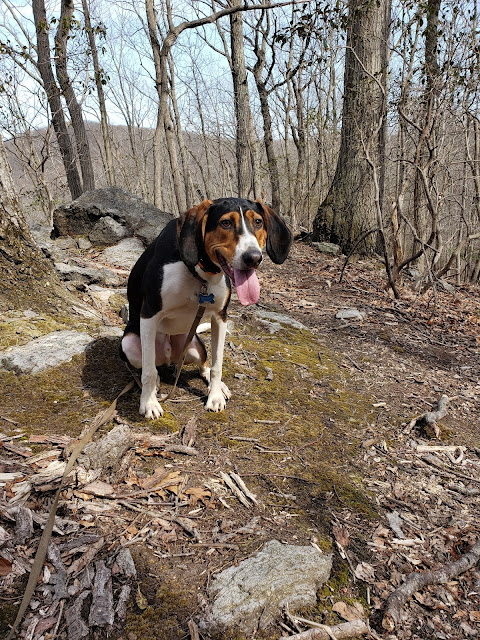 If you follow the yellow-blazed trail to the right, down from the ridge, you enter a little hollow, which takes you to a creek, when you then follow back to Daniels Road and the parking lot. 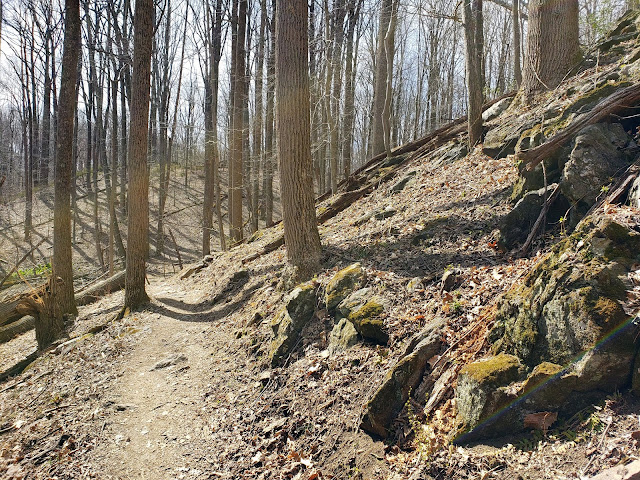 Along the way you see the detrius of abandoned lives and livelihoods. Huge squared off logs lay in heaps, slowly rotting through the years. 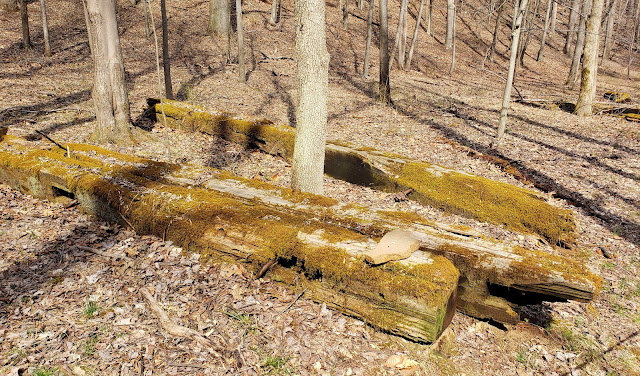 The ruins of two buildings -- homes? 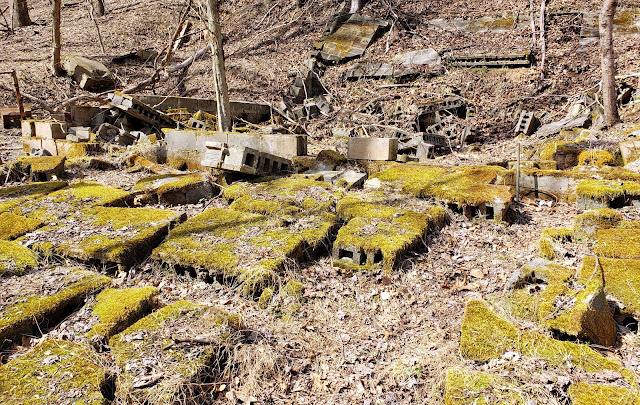 And the burbling creek itself. 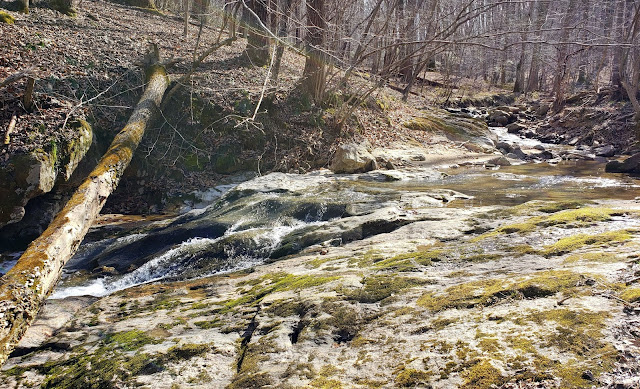 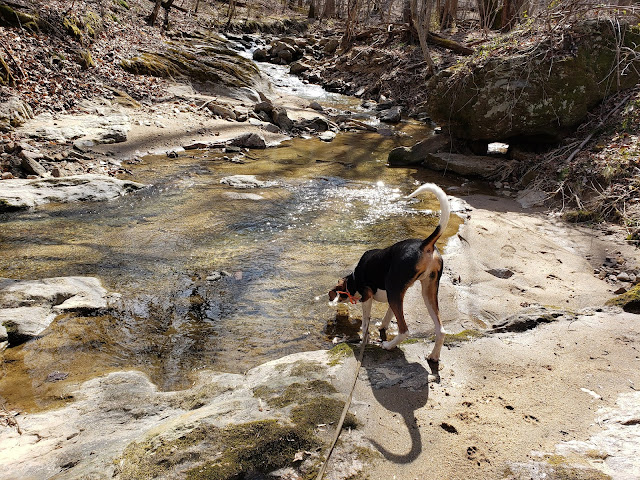 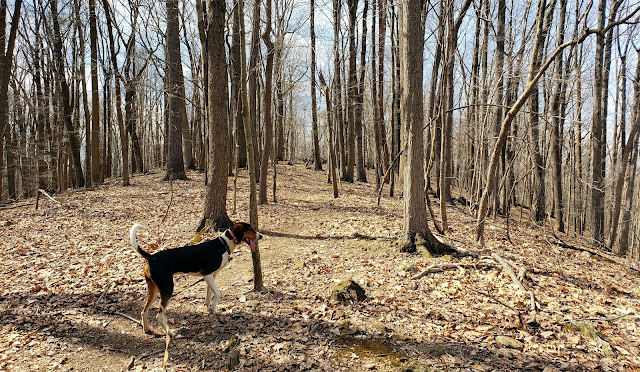 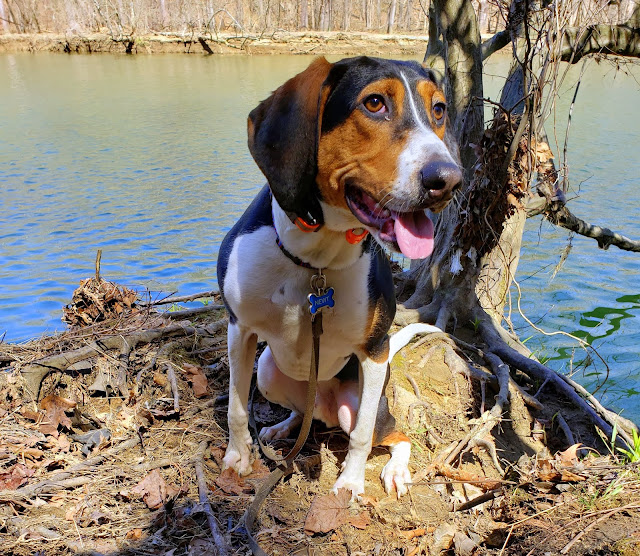