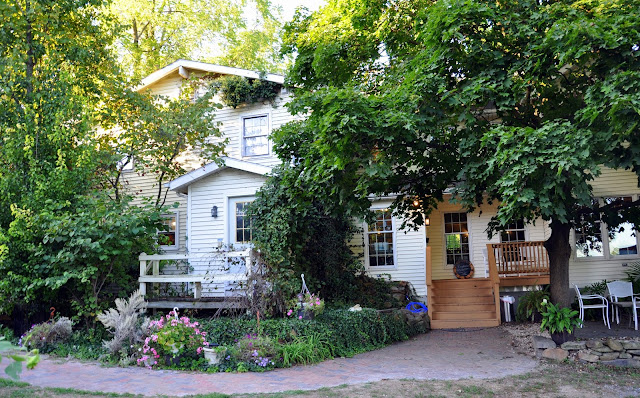 There is so much to see and do in Gettysburg, that it makes sense to consider spending a night or two at a local B&B. One of the local B&Bs is the Battlefield Bed and Breakfast, run by Florence and her spouse Debbie.

The original portion of the farmhouse was built for Cornelius & Anna Houghtelin in 1809. The house stood witness to a battle that raged around it on the third day of the Civil War Battle of Gettysburg -- hence its name.

Since then, of course, there have been additions, first in 1993 as the bed and breakfast was first being opened, and then again in 2012 when the solarium was built, along with two additional rooms below (Anna's Garden and Houtelin's Hideaway). Now the bed and breakfast in offers 10 rooms -- 9 in the house, one in the barn, and a guest cottage. Be sure to check out the fireplace surround in the solarium, which was designed by Victorian architect Frank Furness, who was a cavalry soldier with Rush's Lancers, a distinguished unit that fought on this property. 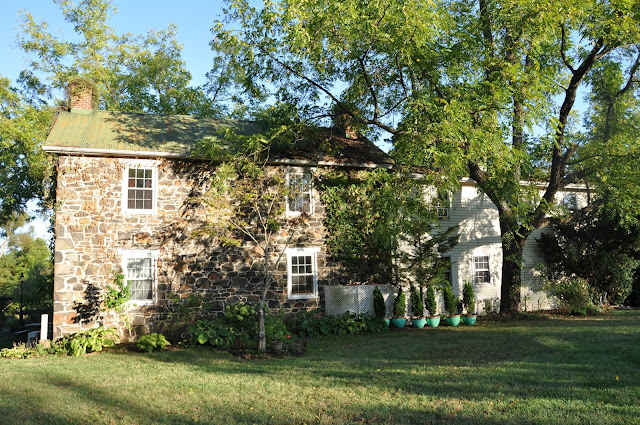 During your stay, you'll notice the many cats that scamper about on the grounds. Florence noted that they diligently spay the cats, but that many cats are "dropped off" onto the grounds. It's amusing to watch them play and roam around. 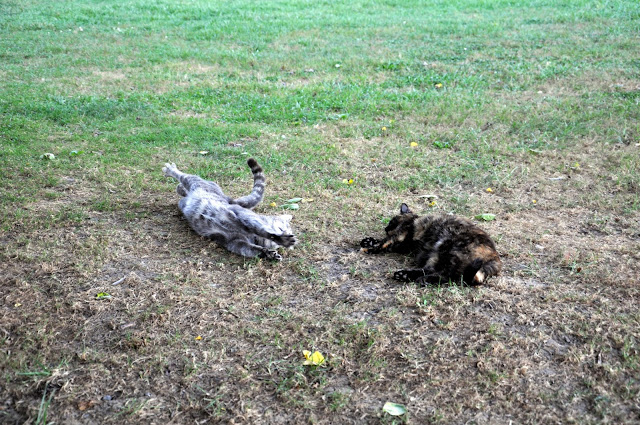 When Florence and her wife, Debbie, first bought the place, they had sworn not to have any pets. None! But after a year or so after they opened, rodents became a problem, and even the guests were commenting on that. Thus, a few cats came to the property, and over the years, a sort of unofficial cat rescue has begun. They provide food -- there's a sort of "cat coop" where they can go for safety and where they're fed -- and shelter (a barn door is left open, cat-width). Some of the felines are friendlier than others and want to be pet, others seem to enjoy the proximity with the guests, while others are very content to watch from afar. The cats are not allowed into the inn or rooms, however, and despite being desperately allergic to the little buggers, I experienced absolutely no distress during my stay.

Despite the plethora of cats, this bed and breakfast is incredibly dog friendly. Two of the rooms have direct exits outside, making Anna's Garden and Houtelin's Hideaway even more convenient for dog owners (but please pick up after your pooch).

Every morning there's an historical lecture. The morning of our stay, there was a discussion of the equipment a Civil War soldier might have had with him, and a demonstration. A first for me, I got to fire a double barrel rifle as well as a musket. Thankfully, there was only a paper bullet loaded, and no animal or human were harmed during the demonstration! 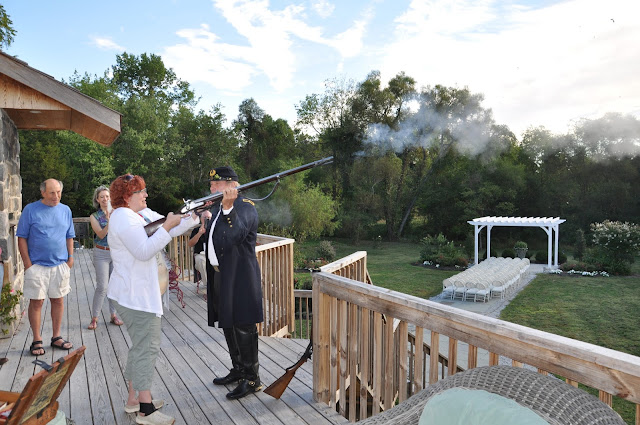 We were enjoying a whirl-wind two days in Gettysburg, so we didn't exactly get to spend a lot of time enjoying the grounds, but I did get some time for a brief exploration. There are tables and chairs set up in the front lawn, where I imagined myself enjoying a hot cup of joe before breakfast -- the only morning I was there I ended up chatting with another guest, who was visiting the area from Detroit. This opportunity to chat with complete strangers in a cozy, homelike setting is one of the benefits of staying at a bed and breakfast! 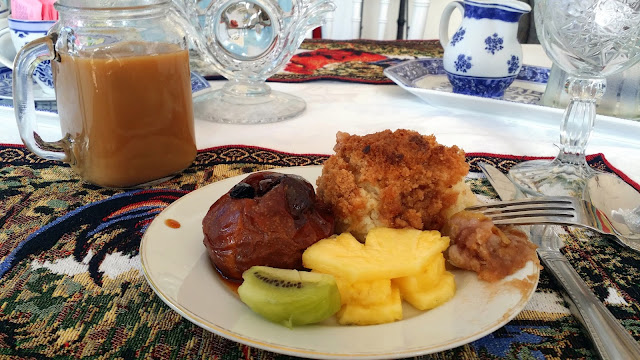 For breakfast, among other delicious offerings, we enjoyed the Pennsylvania Dutch Apple Cobbler Coffeecake

Heat oven to 375 degrees, finishing at 350. Use a glass casserole, sprayed with food release spray.

Apple, Plum, Peach, or Grape Layer
Slice peeled apples, unpeeled plums, par-boiled and peeled peaches, or use whole seedless grapes (red are best). Lay them on the bottom of your casserole. You can use a thin or thick layer depending on how much fruit you like. Sprinkle with sugar, cinnamon. Bake in oven while you prepare the rest. The fruit should start to soften and get steamy.

Coffeecake Layer
Mix the following ingredients one at a time in the order listed. The first three ingredients should be light and airy. Fold in the flour and sour cream gently. They can be lumpy.
1 stick soft butter
1 c sugar
2 eggs
2 c self-rising flour plus 1 c sour cream
Dollop batter on top of hot apple layer. Make sure the apples are fairly well cooked before you put the batter on top. Start to bake.

Crumb Topping
1 stick butter
1 c brown sugar
1 c self-rising flour
Cinnamon -- be generous
Mix the ingredients together and clump with your hand. Sprinkle the crumb topping on top of the cooking batter before the top of the batter browns.

Bake until a toothpick comes out clean and the kitchen smells wonderful (I love these directions!). 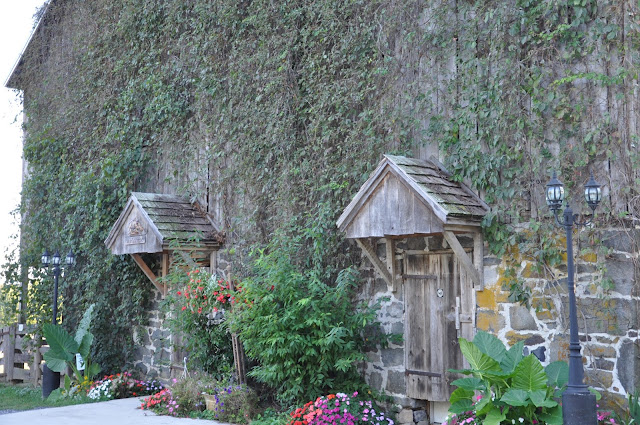 This bed and breakfast is on a ghost tour -- at least its barn is. The barn, which is lovely and aging, served as a hospital, as most standing structures did in the aftermath of the 3-day battle that raged through the region. Men died there, often in agony -- this is hallowed ground. 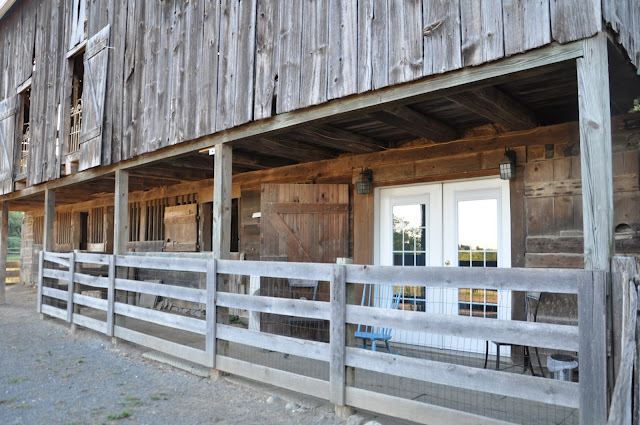 Guests have reported seeing soldiers appearing throughout the home and on the property. Many guests have also witnessed the spirit of a young girl and heard footsteps on the stairs. The ghost tour reports a lantern shining brightly from a nearby field.

I was both relieved and a bit disappointed that I didn't experience anything paranormal during my stay there, but I invite you to come see for yourself!