Biking with the Hound at Edwards Ferry 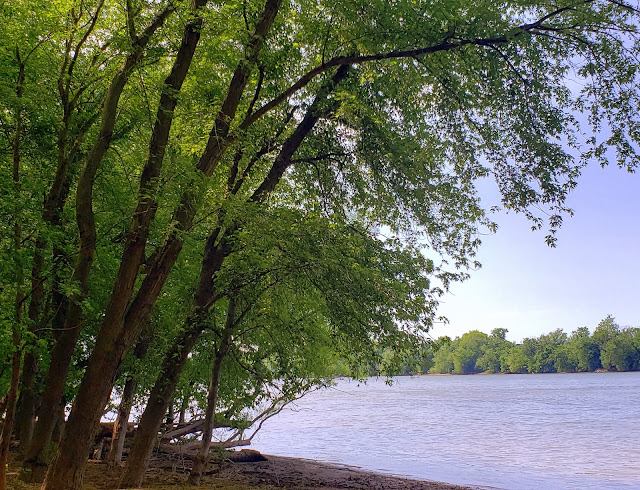 The Chesapeake and Ohio Canal (more commonly known as the C&O Canal) runs 184+ miles in Maryland, stretching from DC to Cumberland along the Potomac River, passing many points of interest. With a variety of aqueducts, lock houses, and other buildings, sweeping views of the river in many places, and an almost entirely shaded towpath, the C&O Canal towpath is a favorite trail for many bicyclists. 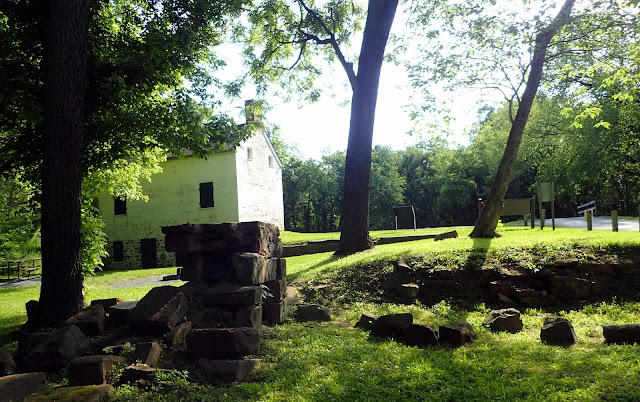 Edwards Ferry, located at approximately mile point 31, is significant because in October 1861, Union troops crossed the Potomac River there by boat, in support of a similar crossing further upstream at Whites Ferry, where Union troops crossed over to Balls Bluff in Virginia. With the ferry service having been discontinued ages ago, now Edwards Ferry offers a boat ramp down to the river and ample parking for both the river and those who wish to access the C&O Canal towpath. 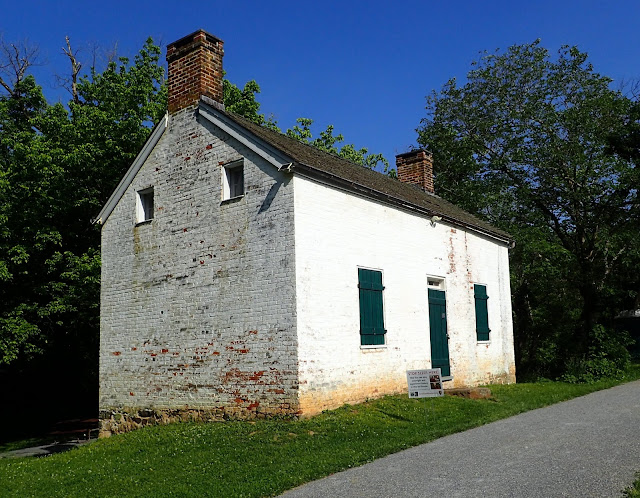 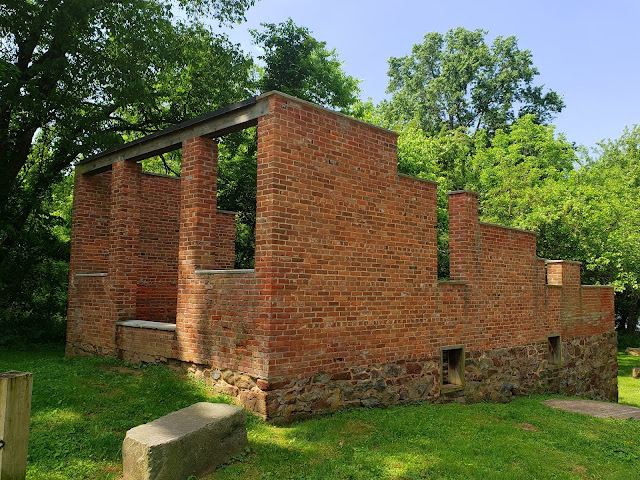 The store's ruins, now stabilized, provide a rare reminder of the many stores, sheds, and warehouses (such as the warehouse along Cushwa Basin in Williamsport) that crowded some of the upstream locks so that merchandise and crops could be shipped down stream, part of the economic vitality that the C&O Canal brought to the region. Most of those buildings were wooden, and were abandoned when the canal ceased operation, and later when the towpath and canal became a park, remaining wooden structures were torn down. 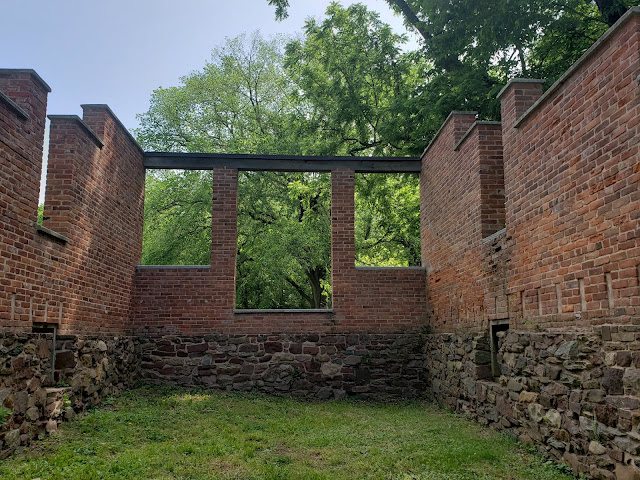 Just shy of a mile north of Edwards Ferry is the Broad Run Aqueduct. Originally constructed as a culvert for Broad Run to flow through on its way to the Potomac River, it was eventually converted to a sort of aqueduct, with the canal supported by a wooden structure rather than the typical masonry aqueducts seen elsewhere along the canal. 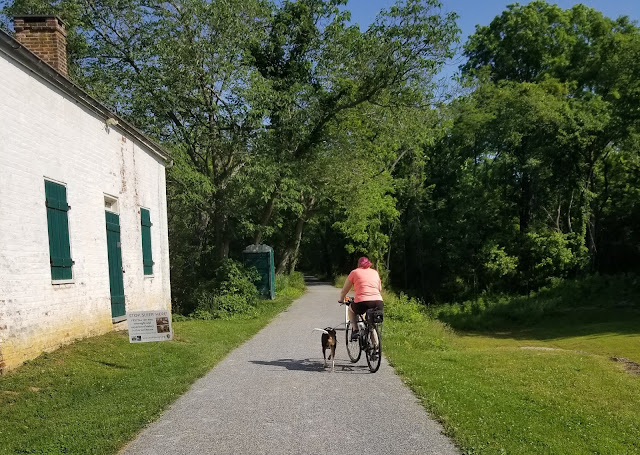 We sought an uncrowded trail because this was the first time we were riding with our 14-month old coonhound puppy, Newty, heeling alongside our bikes. We didn't want too many distractions or to have to dodge other dogs. We also planned a very short, 5-mile ride for this introduction to what we hope will be years of fun outtings. Four years ago I began biking again, after nearly three decades of not, just so I could go riding along the towpath. This year we added the fun of having our coonhound run along side our bikes during our day rides. 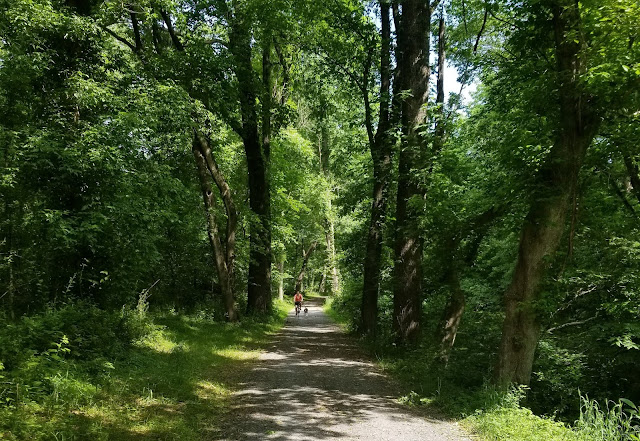 Whether heading north or south from Edwards Ferry, the towpath is almost entirely shaded and in some places, forms a shaded green tunnel. North of Edwards Ferry, the path is well groomed with a fine packed gravel. South, as of the writing of this, it was a little rough in spots -- it would benefit from the upgrade that the north side clearly enjoyed. 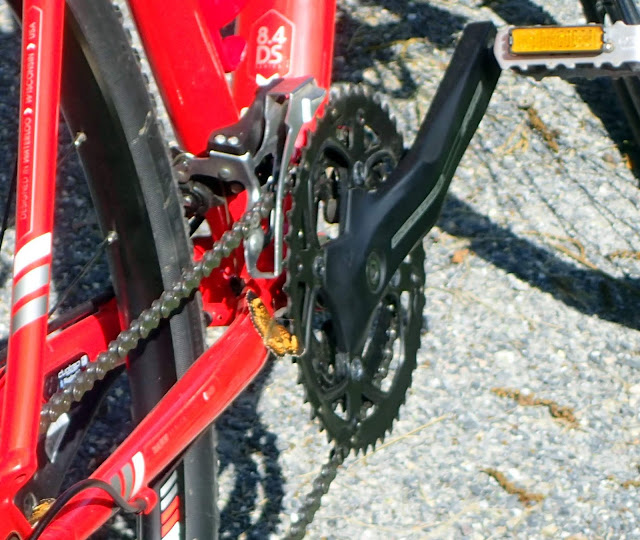 We've been preparing for this day for a while. After we taught our puppy some manners, including heeling, we decided to teach him to heel to us while riding our bikes. Although his grasp of the concept is a little rough -- I pedaled a lot less than I should have because he was pulling -- he seems to enjoy running alongside our bicycles and he's gradually improving. We purchased a special hiking/biking body harness for him -- with a little extra padding so it won't rub, and a bike lead “baton” that attaches just under my bike's seat to hold the lead -- and Newty -- away from the bike wheels (rather than holding the lead up by the handlebars). We also carried an extra leash for detaching Newty from the bike during our rest breaks -- because this was our first time out, I let him rest every couple of miles -- and extra water bottles for him. Although the day was only in the mid-70s and we were on a shaded path, he did get hot, and we realized we should have brought more water for him. We shared ours with him, until he was no longer thirsty. Next time we'll bring double the amount of water for him. 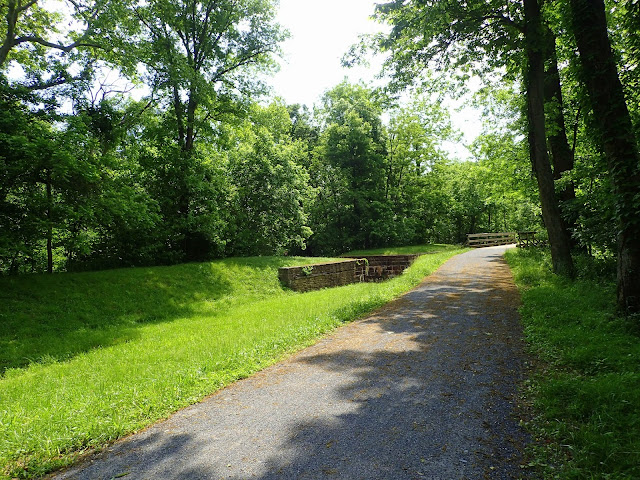 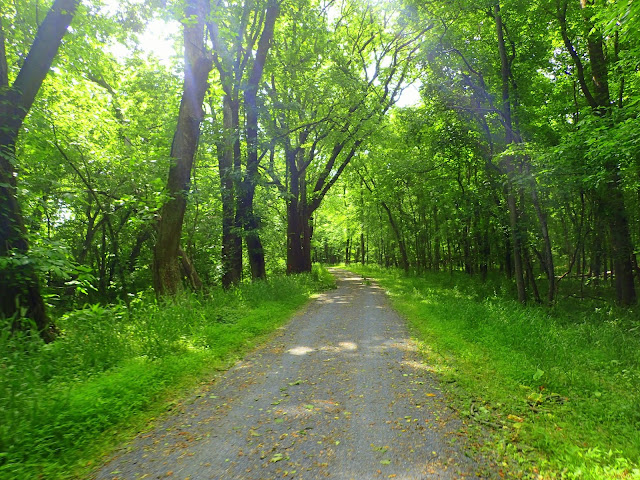 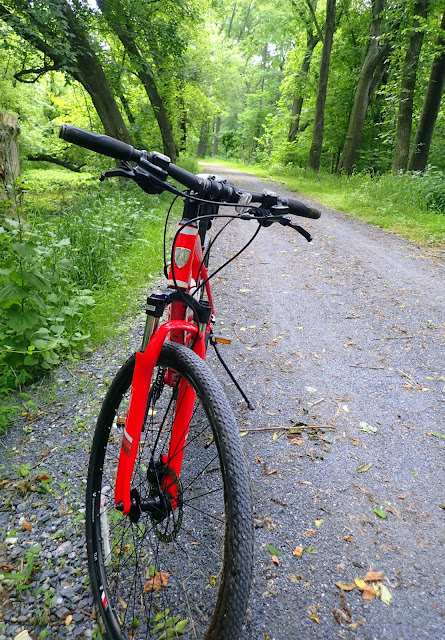 This day trip was made possible by Residence Inn in Fulton, MD, a dog-friendly hotel.
Posted by Jody Arneson at 6:28 PM