Largest Collection of Matisse Paintings at the Baltimore Museum of Art

There's a hidden gem in Baltimore that we either take for granted or tend to overlook: the Baltimore Museum of Art (BMA). With more than 95,000 works of art, the BMA has a massive collection.

But if for no other reason, go see its collection of works by Henri Matisse -- the largest such public collection of his works. BMA's galleries also include a selection of American and European painting, sculpture, and decorative arts; works by contemporary artists; significant works from China; Antioch mosaics; and a collection of art from Africa.

Another reason to go? It's free. Yup. And you can thank the City of Baltimore and Baltimore County, as well as several foundations, for making it that way. Since October 2006, both the Baltmore Art Museum and the Walters Art Museum have offered free general admission year-round as a result of grants given by Baltimore City, Baltimore County, and other sources.

What a great place to introduce kids to the wonder of art!

And bonus: BMA offers an urban garden oasis in the form of its shady, landscaped 2.7 acre sculpture garden. (Looking for other sculpture gardens? Be sure to check out Art Omi, in upstate New York; Annmarie Sculpture Garden in Solomons, MD; and Grounds for Sculpture in Hamilton, NJ!) 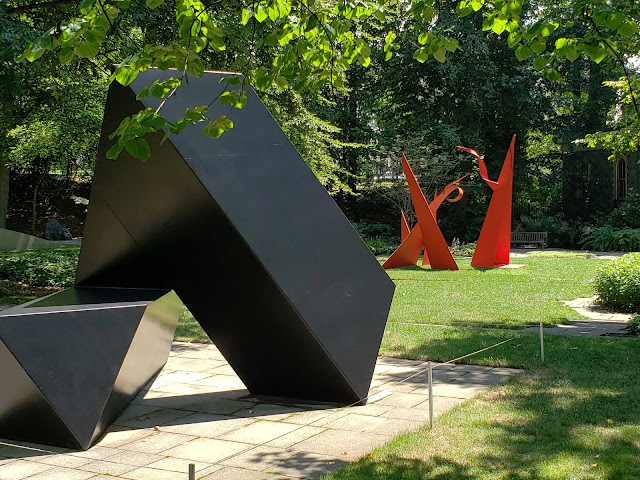 What can you expect inside the museum? While browsing the galleries, you'll see examples from one of the museum's collections of prints, drawings, paintings, and photographs and textiles from around the world, housed in a "Roman Temple"-style building, originally built in 1929.

The highlight -- and heart -- of the museum is the Cone Collection, brought together by Baltimore sisters Dr. Claribel and Etta Cone, who were born as the Civil War was ending and lived well into the 20th century. These accomplished collectors amassed an impressive collection of works by artists such as Matisse, Picasso, Cezanne, Manet, Degas, Giambattista, Pittoni, Gauguin, van Gogh, and Renoir. Nearly the entirety of the Cone Collection was donated to the museum and form the core of its exhibition.

Parking: The BMA East and West Lots are available for BMA patrons, and include wheelchair accessible spaces.