Hunting Ghosts at the Famous Nemacolin Castle with Ghosts N'at! 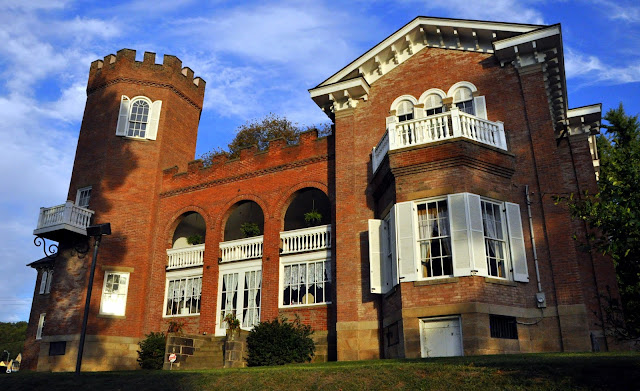 This lovely old mansion started life in 1780s as a modest trading post, with a single room on top, at the end of the Nemacolin Trail, a trading route frequently used by Native Americans. 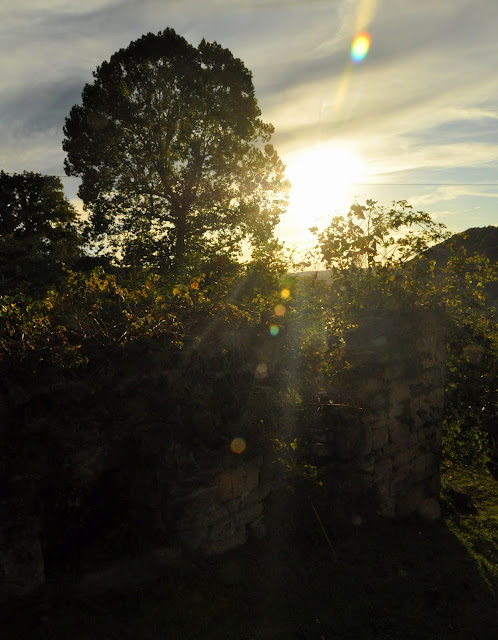 The trading post was near the site of Fort Burd, built by British colonists during the French and Indian War. Construction on the castle, including addition of a crenelated tower, continued through the Victorian era. 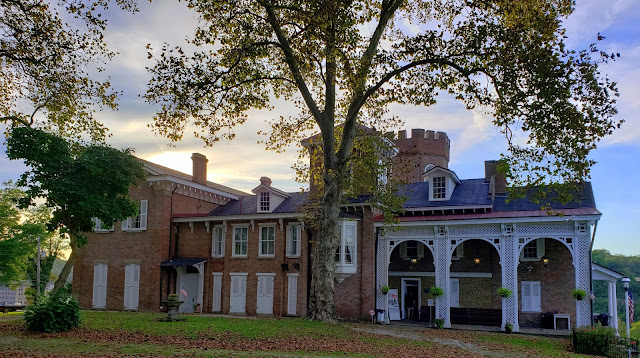 Outside of the castle, especially in the back, you can sort of tell that the mansion is really several buildings joined together. In front, the castle looks more seamless. It's a magnificent building from any perspective. Inside, the disjointed construction is more obvious. 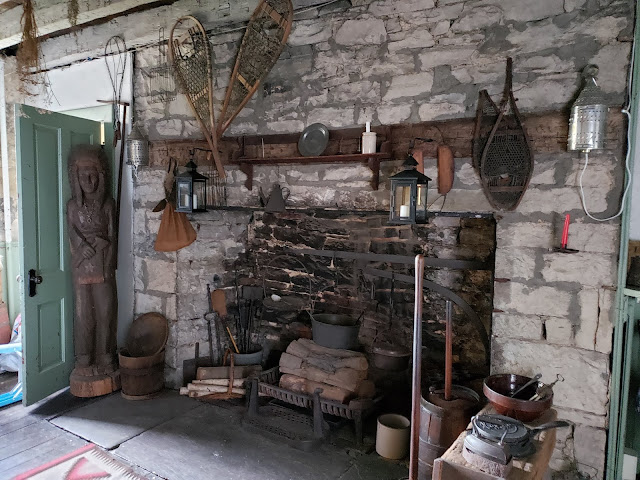 The eldest section, the kitchen, has low ceilings with rough hewn beams and a lovely old hearth fireplace where many a meal had been cooked. Adjacent, there's a room with a well 70 feet deep. 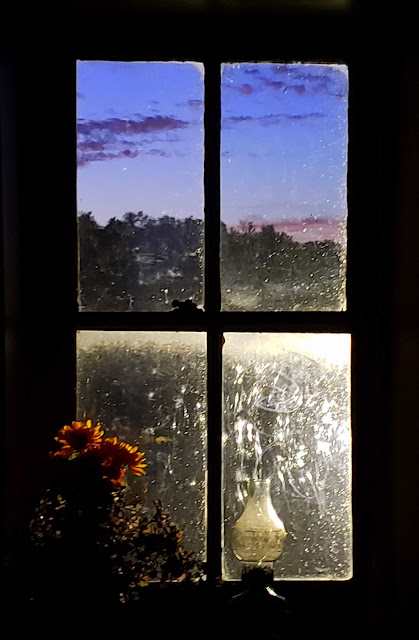 According to legend, folks have died in the well, although it's hard to imagine how that could be accidental. 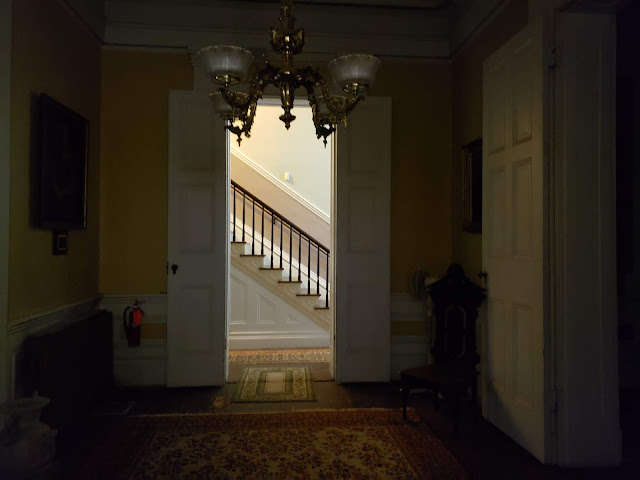 There are rumors of Native American burial grounds located adjacent to the property. Soldiers from the fort, who fought in the French and Indian War, likely died near there. An old factory once operated on the site. 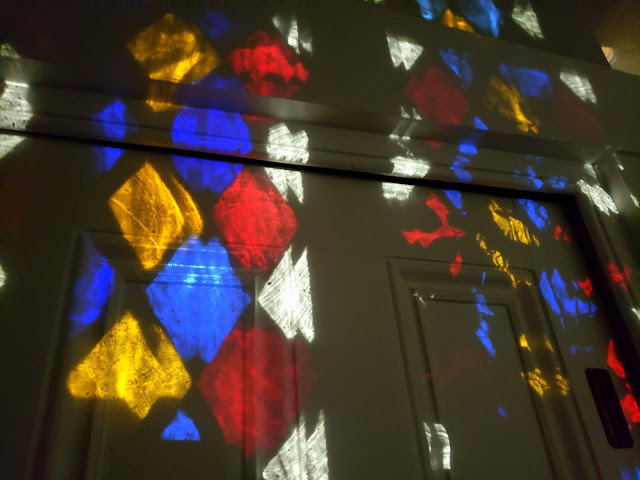 Three generations of the Bowman family were the only ones to live in the house/castle. Jacob and Isabella built the trading post with the modest single room on top. Jacob started a nail factory, about where the east wing of the mansion is located. Whether you call the mansion Nemacolin Castle or Bowman's Castle, it enjoys a haunting reputation! One of the ghosts said to haunt the mansion is Mary, an orphan who was a ward of Jacob's. 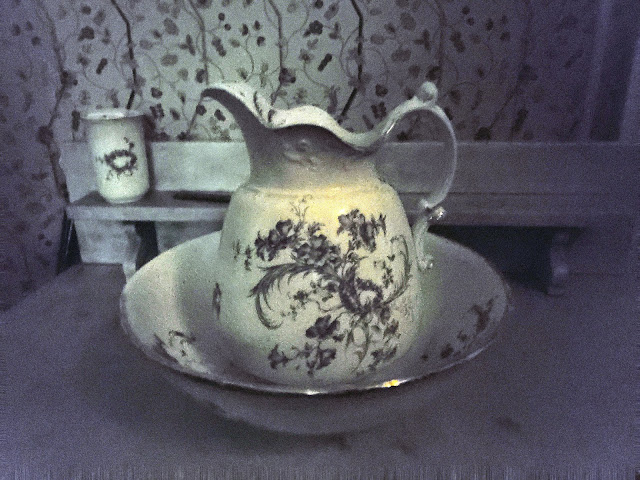 Jacob and Isabella had nine children, and, running out of room, added a broad hallway. In 1847, Jacob died, and the mansion was inherited by Nelson and his wife Elizabeth who added the lovely Victorian east wing, with its elegant rooms and high ceilings. They also built the square tower on the back, over an open well, which housed the nursery on the second floor. 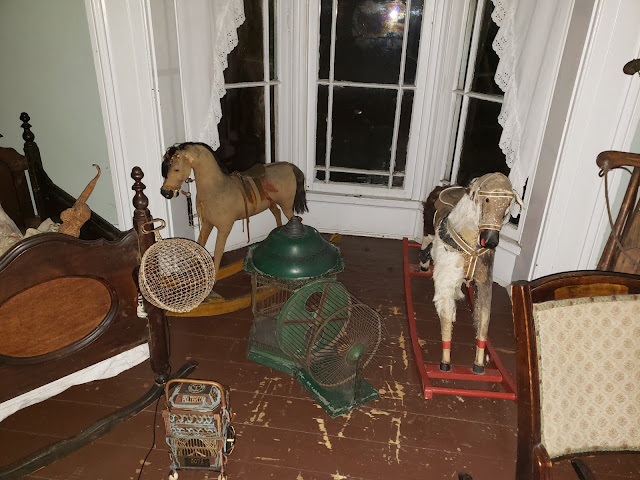 The room over the old trading post became a live-in servant's room. Nelson and Elizabeth had six children, although only two survived into adulthood. Nelson lived until 1892, when the property passed to his eldest son, Charles, who lived there with his wife Leila until his death. Leila lived on the property until her death, when she willed it to the city of Brownsville; the contents of the mansion were willed to the historical society. 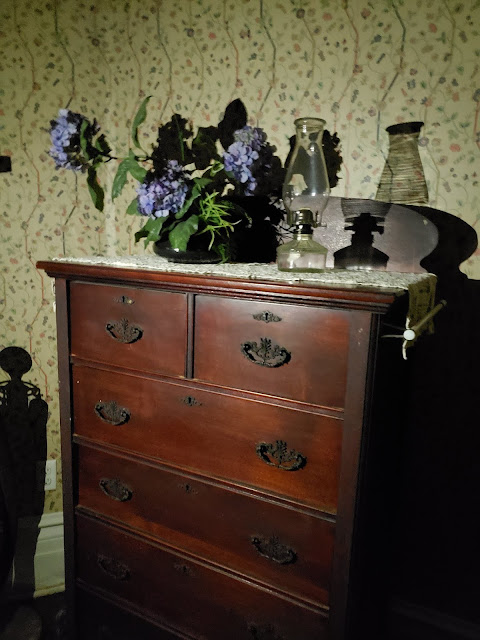 From then on, it was operated as a house museum. 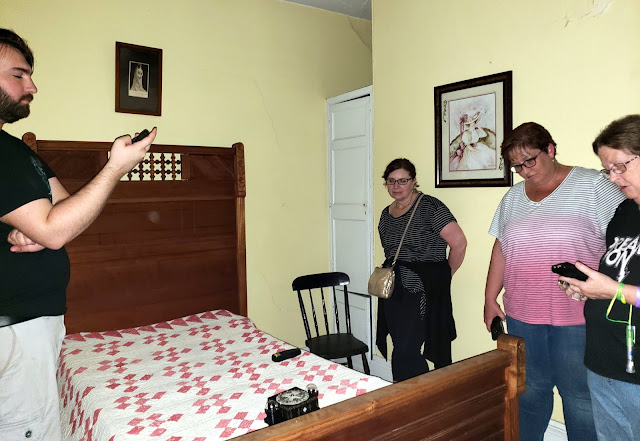 We broke into two groups, each with about eight people. Our group started the tour in the oldest part of the house, in the old kitchen and then we moved into the well room. Each time conducting EVP (electronic voice phenomena) sessions and working with the EMF meters, which supposedly measure the energy ghosts give off. 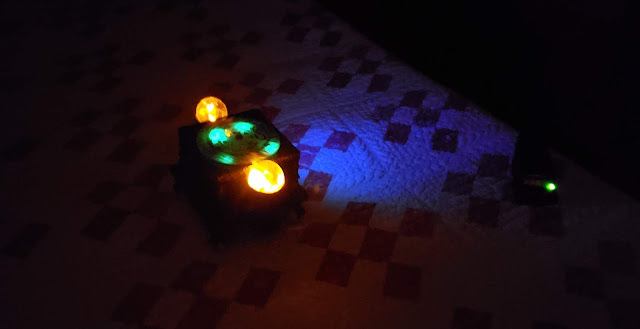 From there we moved to the servants bedroom, which is said to be still inhabited with a mysterious old woman in an old fashioned purple dress. There we tried a new gizmo, a gyrometer, which is sort of like an electronic version of a ouija board. 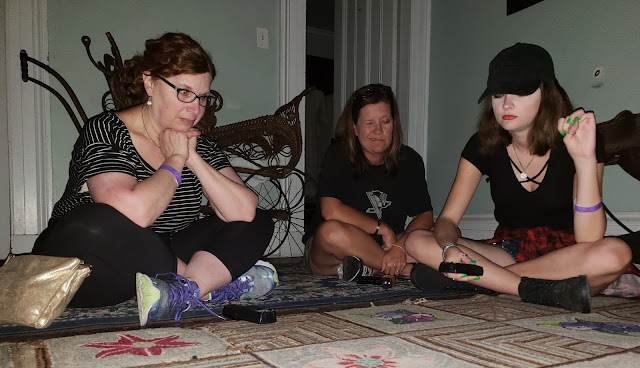 After trying out the gyrometer in the servant's bedroom, we visited the nursery, still filled with toys, again conducting EVP sessions. In each room, we got some interesting results, although the words were sometimes indistinguishable and, to be honest, you wonder if some of the noises recorded were someone burping or farting or awkwardly shifting their feet. 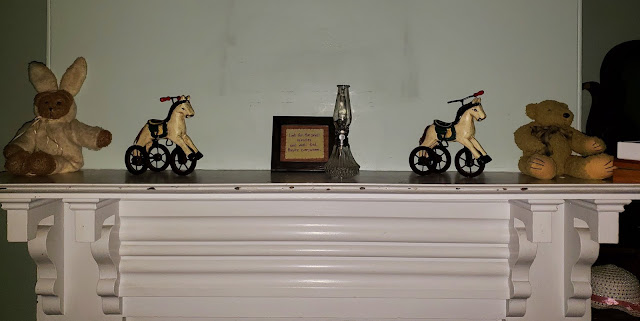 We moved on to the bedroom in the round tower, checking out the mysterious room at the top of the stairs, which crawl upward hugging the wall. It was interesting exploring the old mansion in the dark of night, and it was definitely creepy. We were getting some results, and heard a few unexpected knocks. But there were just over 20 people in the house, and we couldn't definitively say there wasn't a logical explanation for some of the unexpected sounds. 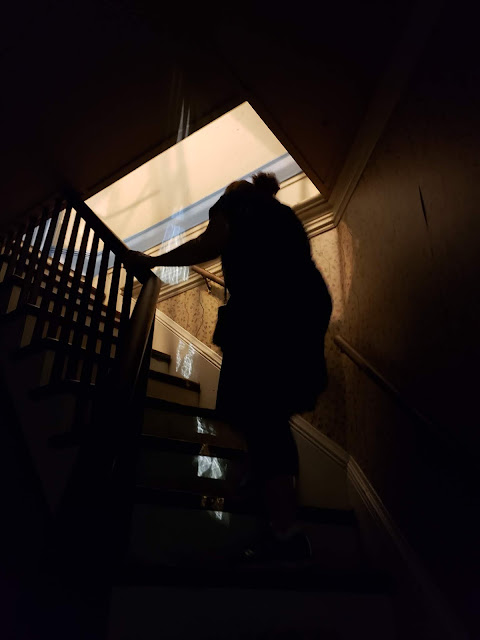 As the evening progressed, we visited the Victorian wing's bedrooms and the attic, but it didn't get really creepy until we headed down to the basement. The door closed behind us with a startling bang -- I was the last of the group to head down -- and after we were all collected in a far corner of the basement, we heard footsteps descend the steps, but no one, and I mean, no one, was on the steps at the time. 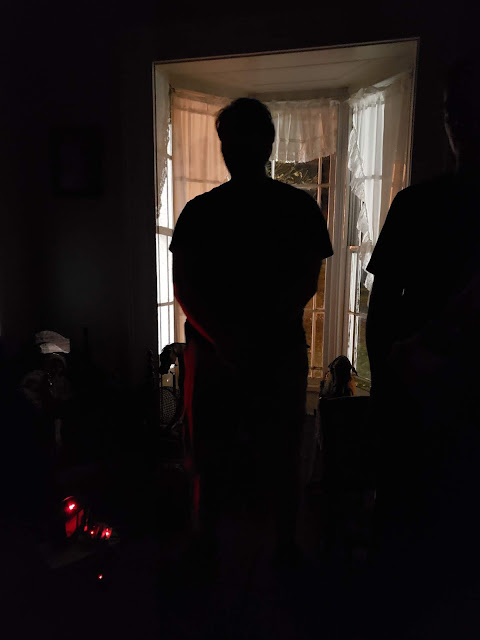 The Ghosts N'at ghost hunter told us the story of Amos, who may or may not have been a runaway slave, because in addition to the factory and the trading post and the Indian burial grounds and soldiers, the mansion may also have served as a stop on the Underground Railroad. 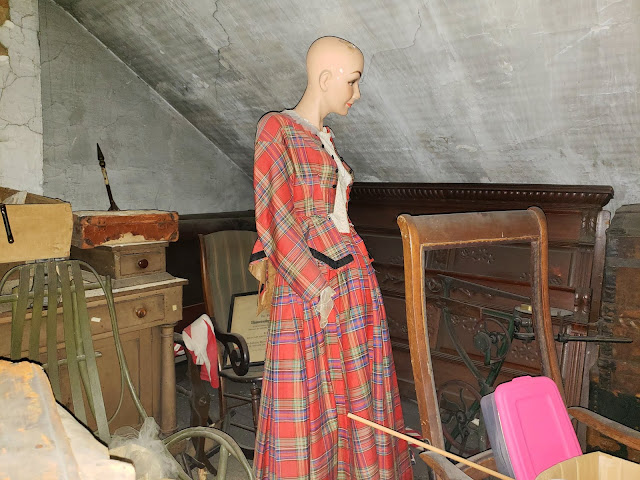 During our time in the basement, in the midst of an EVP session, I felt something touching my ear, and about to freak out because there's a spider on my head, I asked the others to shine a flashlight and get it off. Nothing there. No cobwebs, no spiders. Nothing. They continued the EVP session, and asked, "Were you trying to tell Jody something?" The response on the recorder, "A little."

Goosebumps lined my arms. I was really scared!

Renee, the docent for the house museum and a professor at the local university, has heard footsteps down the hallways, heard giggling, and seen lights turn on and off when there was no one in the building over the many years she has volunteered at the museum.

If you want to hear more about the ghosts of Nemacolin Castle, the Brownsville Historical Society is hosting several nights of ghost story telling about the building's current inhabitants.

Hours: Check the websites below for ghost hunting and storytelling tours and events. House tours are offered Saturdays and Sundays, noon to 5 p.m. 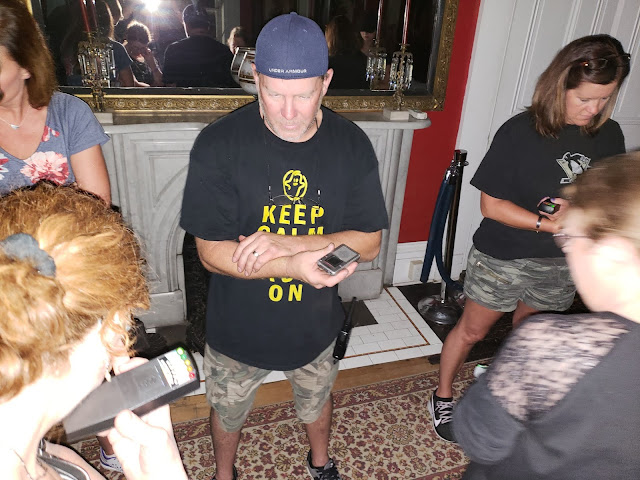 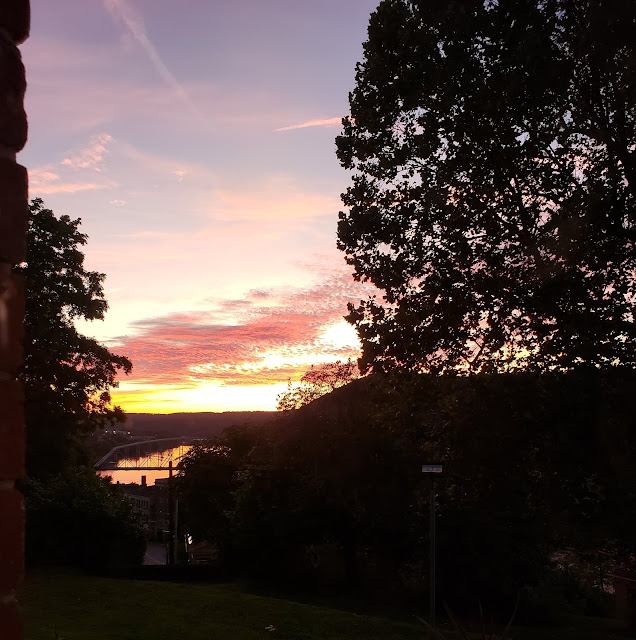