I've enjoyed drive-through animal "safari" zoos several times, always delighting in seeing (and usually getting to feed) the animals. Kids will love it, but so will any but the most cynical of adults. And believe it or not, this makes a great winter daytrip!

The Virginia Safari Park was no different, and cool -- it's open all year round. 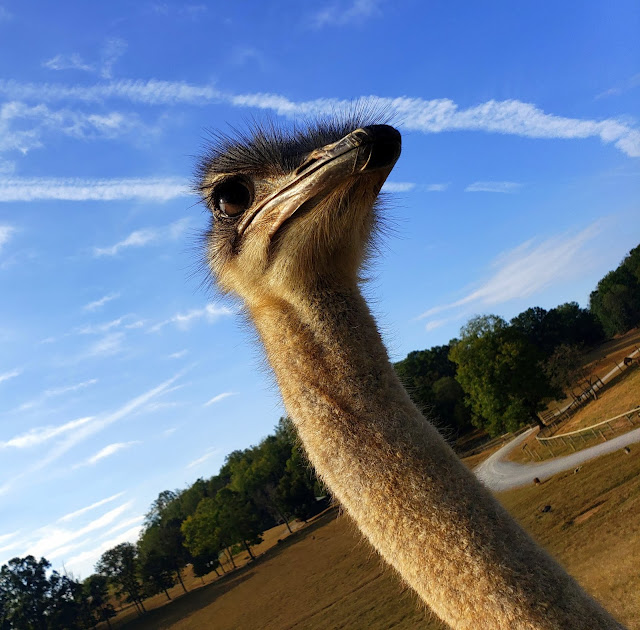 We got to see and feed a variety of animals, from an inquisitive elk cow to an curious ostrich, as we drove the three miles of gravel road through the park. During the drive, we fed animals through the car windows. 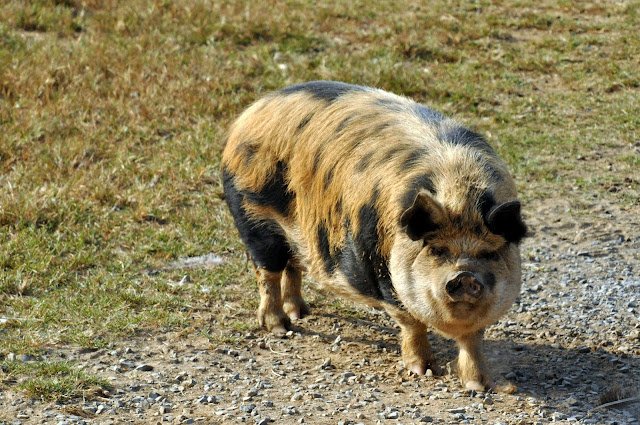 Other animals watched us from a cautious distance: a friendly pot-bellied pig, several wise-looking camels, and either rhea or emus (I couldn't tell which). 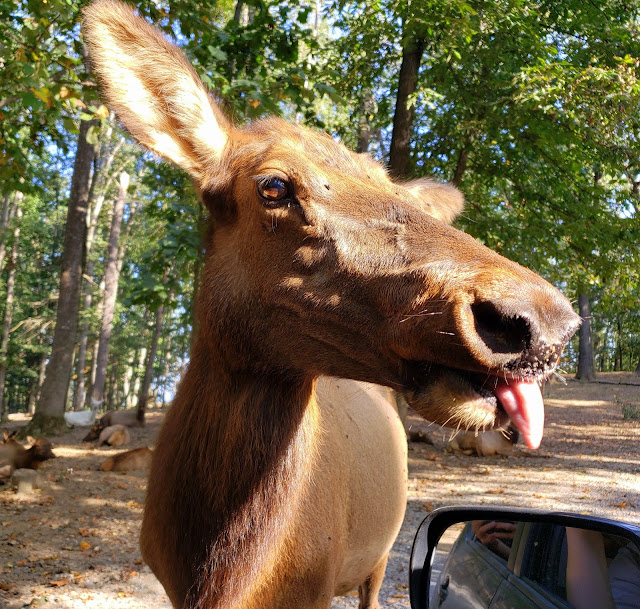 Although the animals are wild, they've also clearly adjusted to their situation. They're used to vehicles. They're used to being fed by humans -- this isn't quite the same as seeing a moose in the woods in Maine or a bison in Yellowstone National Park or a horned oryx in the deserts of North Africa. Same species, different behaviors -- no self-respecting elk is going to walk up to your car in Montana to scam a handful of feed. 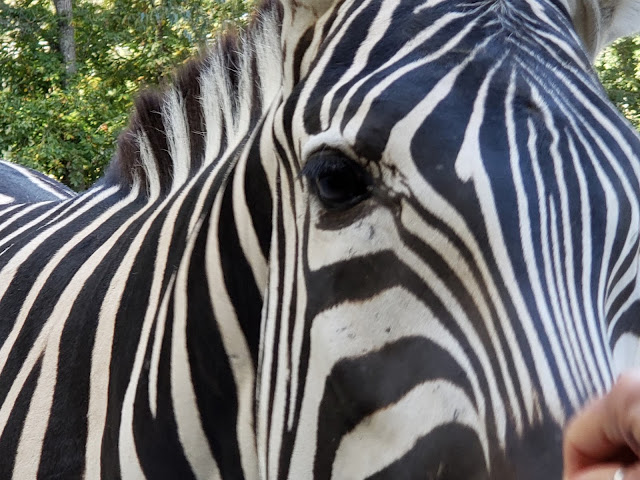 Buckets of animal feed are available as you enter the park. The animals are free to roam, but they follow their instincts, which admittedly have adjusted for the free fed they receive from visitors to the park. 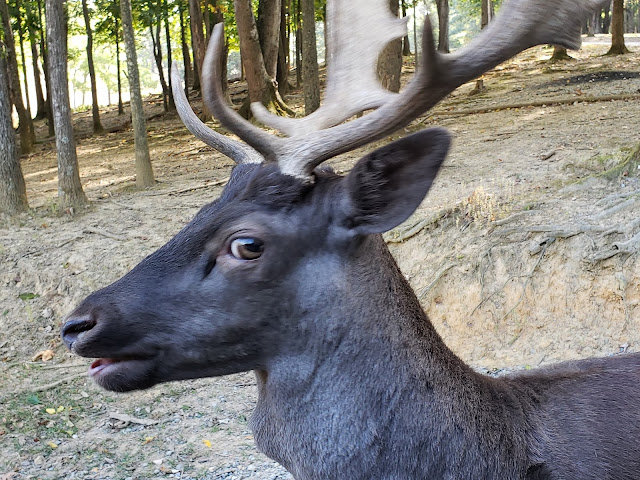 The llamas had clearly formed some sort of llama mafia and were working together to slow and then stop our vehicle, organized crime and criminal extortion, llama style. When one stopped my car, it was smirking. They don't move until you've given them their due. 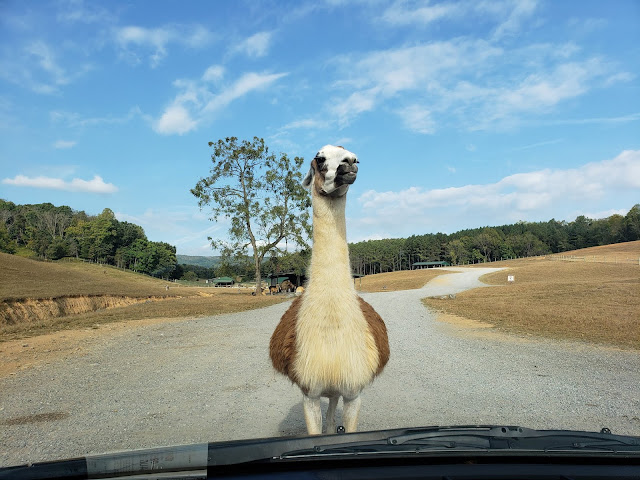 Predatory animals, such as llamas, lions, tigers and wolves, and other more peaceful animals, including giraffes, rhinos, and giant anteaters, are held in a more traditional zoo setting, where you can walk from enclosure to enclosure to see and enjoy them. 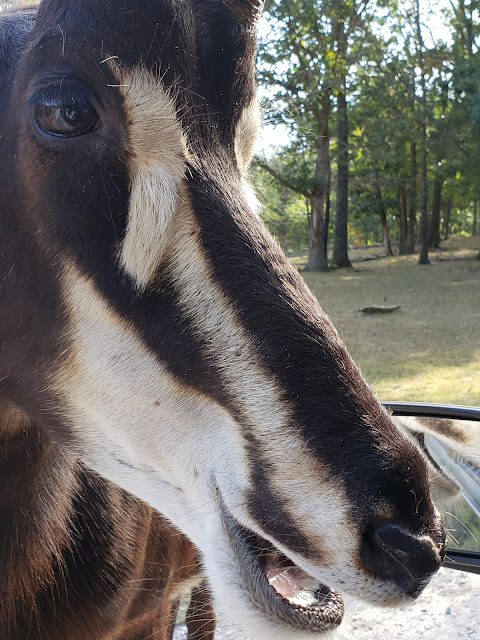 Word of warning: All persons entering the safari park do so at their own risk. The park is not responsible for injuries to any individual or damage to any vehicle. Now, while that seems to be a fairly standard caveat, and you think, nothing can happen, weeeelll, we had an experience. 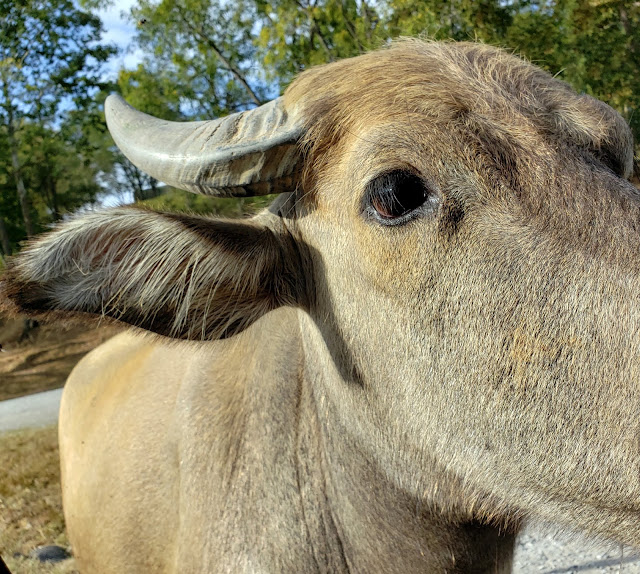 The water buffalo are very gentle but like the llamas, can be insistent. A cow came up to the driver's side window looking for food. I gave her some, and she then stuck her head in the back window, which was all the way down, looking for food there.

We gave her some there too. But then, as she pulled her head back, one of her horns gored the car's roof. 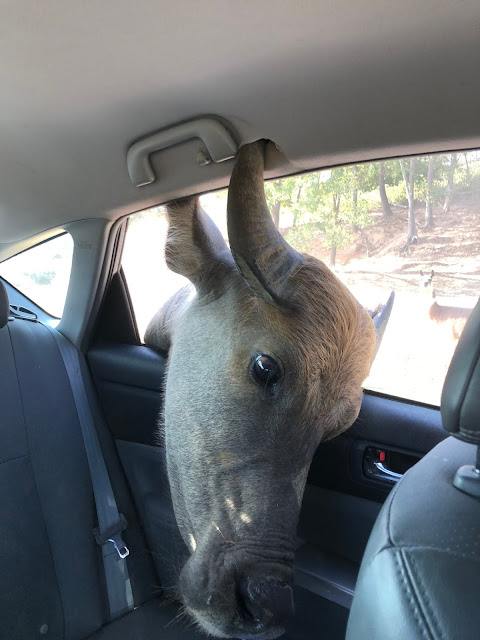 And she was stuck.

You have a lot of interesting thoughts when a water buffalo is stuck in your car and I'm not going to lie, I learned a lot about myself. Panic wasn't far away. I feared for my car. I vowed I would take up crocheting as my new hobby... 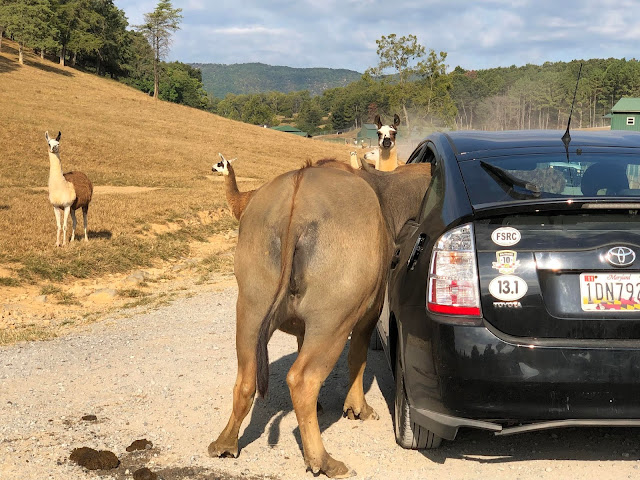 We called the park's staff and they came immediately to help the water buffalo (and us). We stayed in our car until they arrived, though. I reached back a few times to scritch between her horns -- she seemed to like that.

They were able to get her to move her head down and get free -- it didn't take long. She was very gentle, but a couple of times, she struggled, as if to say, "I'm done here now." During one of those struggles, she shattered the rear driver side window and slightly dented the door.

And of course, that's between me and my insurance.

Oh well. The important thing is, this gentle giant walked away unharmed by the experience, and unfazed, as she approached us again seeking food.

I did get a little nervous when the Texas long-horns (or they may have been ankole -- I couldn't tell you the difference and I'm not a cattle expert) showed up looking for food...

I'd go again in a heart beat. And again. And again. It was marvelous interacting with the animals and getting to see them up close. It was also pretty amazing to see how the llamas worked together to slow the cars and stop them so they could get more food. Smart beasts, those llamas! 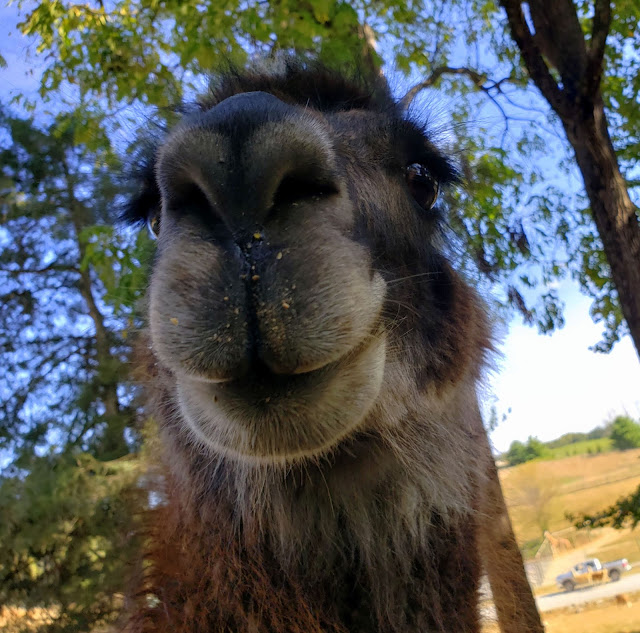 Know before you go: Your vehicle will get messy and the animals specialize in knocking the buckets of food out of your hands. The llamas can be quite wily in their efforts to gain access to the feed -- they have incredibly long necks. The park offers car vacuum cleaners in the parking lot on the way out of the park, so you can clean up after your park experience. We were told we were the first to have our car window shattered, but I doubt that -- the water buffalo was way to unfazed by it -- it was almost as if she'd done it before...

Hours: The park is open year round, but check the website below for specific hours, as they change seasonally. Closed major holidays. 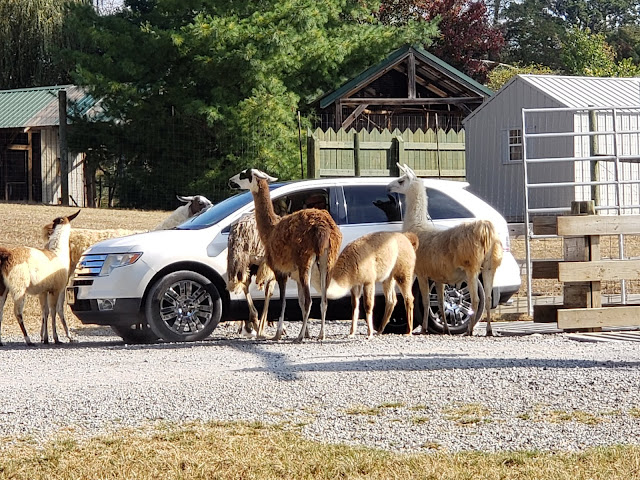