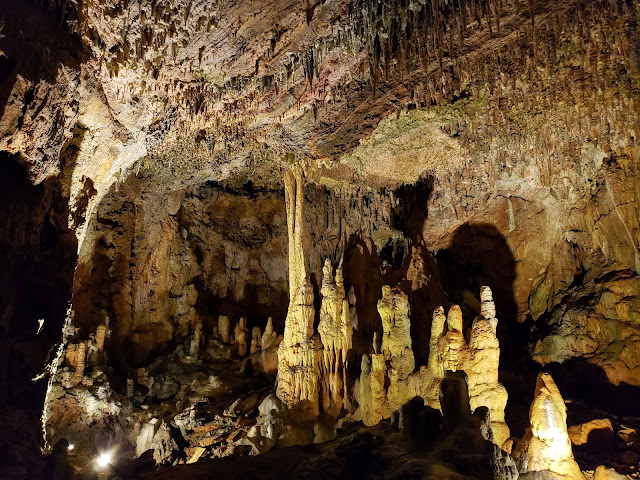 Grand Caverns, formerly known as Weyer's Cave, is located in the central Shenandoah Valley in the town of Grottoes, VA and is America's oldest "show cave." 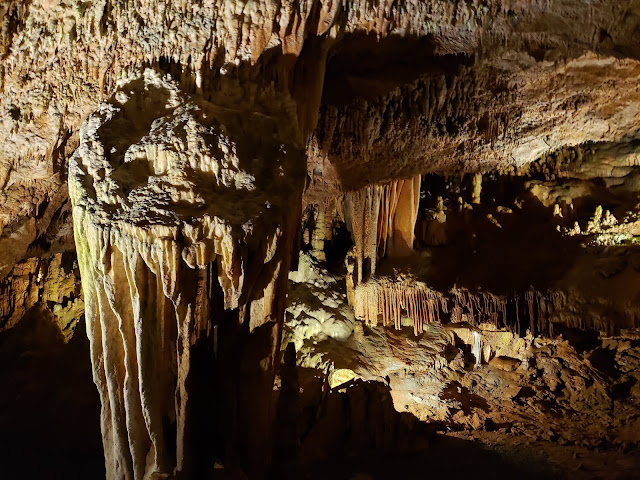 Open to the public since 1806, there's a lot of history in the cave, as former presidents and Confederate and Union soldiers have visited it over the years. 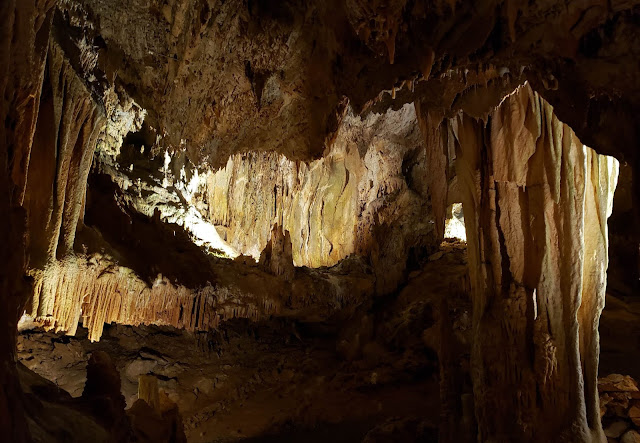 Today, the cavern tour consists of approximately one mile of walking at a leisurely pace, up and down a few stairs. To go into the caverns is to visit another world completely. Sense of space, relative to other landmarks, is lost. Shadows cloak the walls and far off distances, and the lighting throws off its own unique shadow shapes that meld into the darkness of the walls. It is its own world, dark, mysterious, and forbidding. 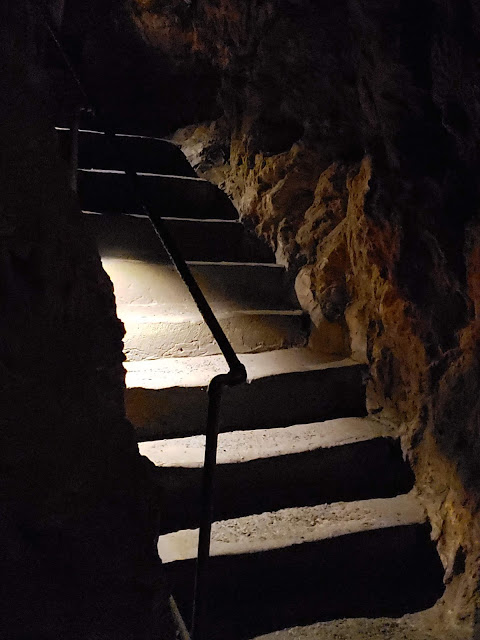 You go past rooms called the Rainbow Room, Dante's Inferno, the Ball Room (so called because balls were once held there), and Martha Washington's Dressing Room (no explanation why that's called that); there are formations labeled Jackson's Horse, George Washington's Ghost, and the Bridal Veil. 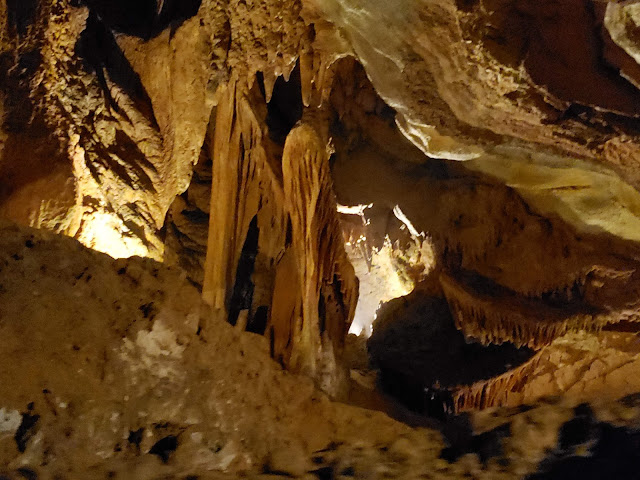 The most stately room, "Cathedral Hall," is 280 feet long and more than 70 feet high -- one of the largest rooms of any cavern in the eastern United States. The cave is also known for its unique formations: shields. Only a handful of caves worldwide have these formations, and this is the only one in the region. In one "room," there were over 30 of these unique and beautiful formations. 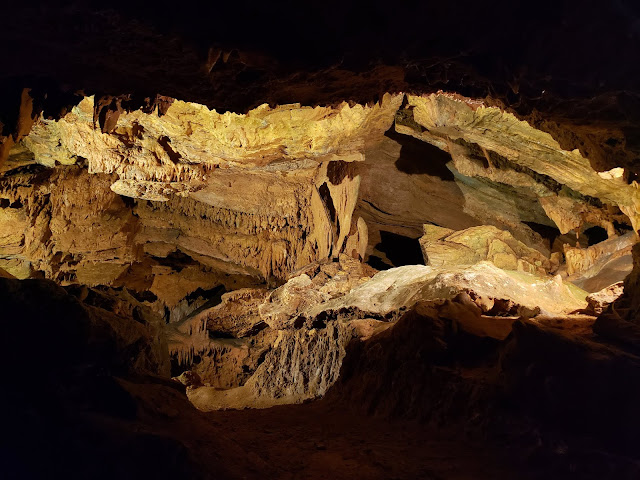 I'm gonna go technical on you for a minute: A cave shield forms as calcite-rich seep water under hydrostatic pressure is forced through tiny cracks in a cave wall, ceiling or occasionally, floor. As this seep water loses carbon dioxide to the cave air, calcite is deposited as parallel extensions to the cracked walls.

There were the usual formations pointed out, and the tour guide walks you through the difference between a stalagmite (coming up from the floor) and a stalactite (dripping down). There's cave bacon and draperies and flow stone, all beautiful and awe-inspiring.

The tour takes you past a little reflecting pool -- man made but filled with cave water and reflecting some stalactites on the ceiling above that look like New York City in the reflection.

They make it fun for kids by pointing out different animals that the rock formations create. It takes some imagination, but it's kinda cool.

Grand Caverns was discovered in 1804 by Bernard Weyer, who'd lost one of his traps and investigated a small cave to look for it. Two years later, the land owner -- not Bernard, by the way -- opened the cave to the public. Reportedly, Thomas Jefferson himself toured the caverns.

Over the years, the caverns had multiple owners, getting renamed several times and finally becoming Grand Caverns in the early 1900s. In the 1970s, it became a regional, and then a city park.

Both confederates and union soldiers entered the cave during the war and there are more than 200 signatures of these soldiers, the most famous of which is the signature of Union officer Captain W. W. Miles, of the 14th Pennsylvania Calvary. Only one of these signatures is pointed out -- Miles' of course -- the others aren't in an effort to preserve these ever so fragile historical "documents." 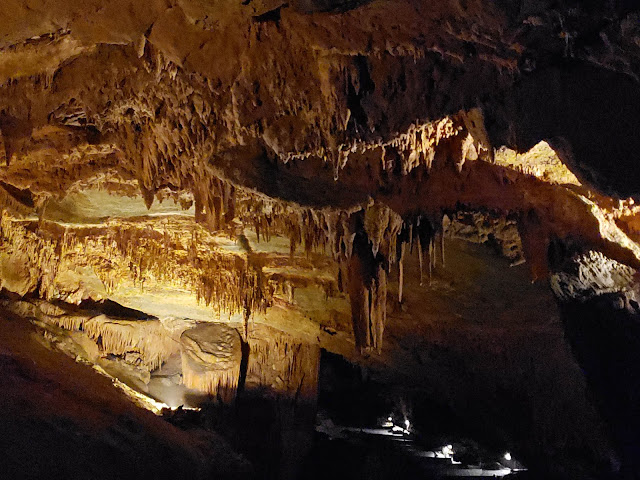 We know, from their signatures, that on May 19, 1864 General Duvall, a Virginian of the 5th New York Volunteer Calvary, visited Grand Caverns with some of his officers and privates. Captain Kirkpatrick and others visited the caverns on September 26, 1864 on their way to support an engagement in Waynesboro on the 28th. Miles visited and signed his name deep in the caverns on September 26, 1864. 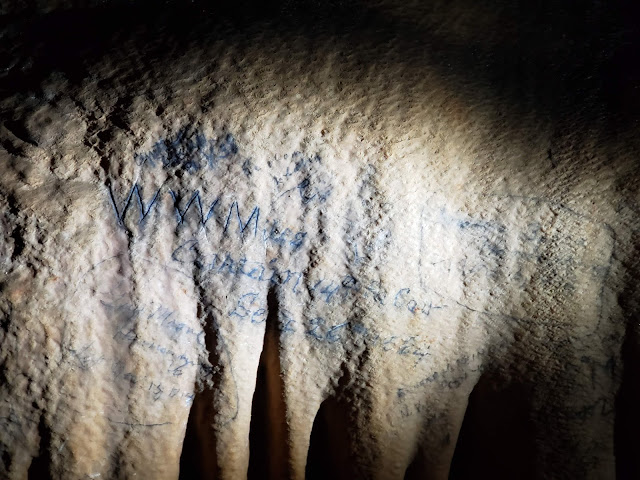 There were several engagements that took place near Cave Hill, including the battle of Cross Keys on June 8, 1862, in which the Confederate forces, commanded by Maj. Gen Stonewall Jackson, defeated Union forces led by Gen. John Freemont. It was a Confederate victory and from June 11-17, 1862, Stonewall's troops camped along the South River and often visited the caverns, leaving their names behind either signed in pencil or carved into the stone. Over the years, other visitors have also vandalized the cave by signing it -- although when the signatures are more than 50 years old, it becomes "historic." 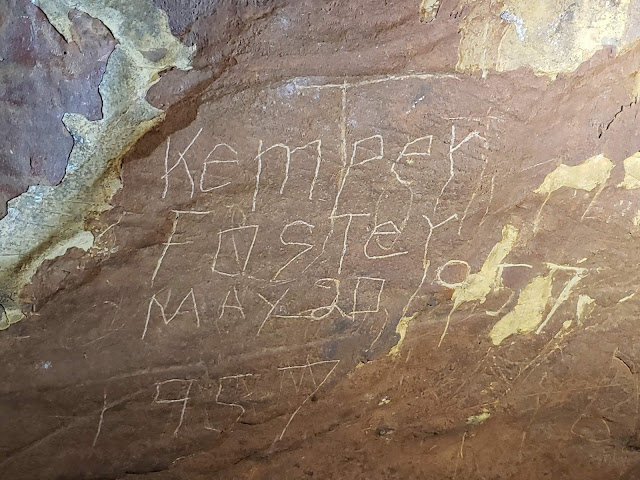 Know before you go: The temperature inside the cavern is consistently 54 degrees; bring a jacket or sweater. You'll also want to wear shoes with treads because although most of the pathways are lightly graveled, the stairs are concrete and sometimes wet and slippery. 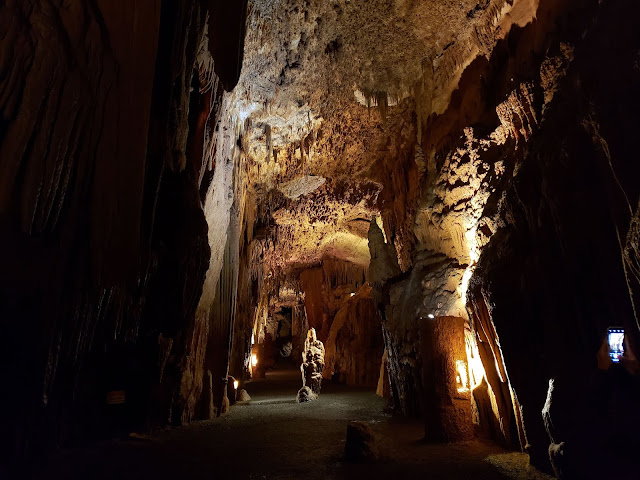 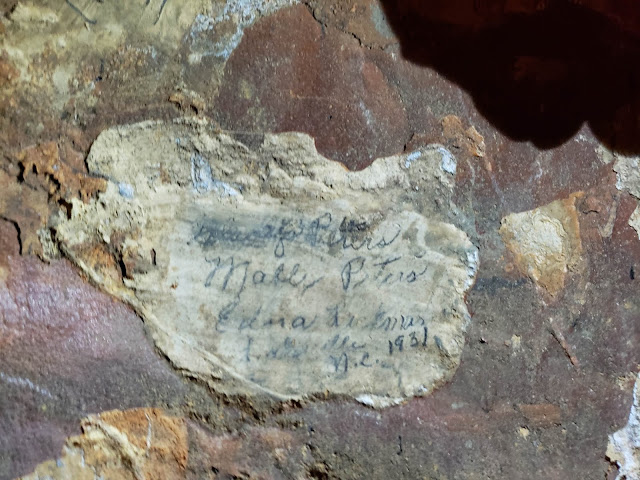