Discovering the Beauty of Nature at the Ward Museum of Wildfowl


The story of how the Ward Museum of Wildfowl Art got started is really cool, actually, and started with two brothers, who began carving in their childhood in the early 1900s.

Lemuel T. Ward (1897–1984) and Steven W. Ward (1895–1976) were native Marylanders -- they were born, lived and died in Crisfield, on the Delmarva Peninsula, and became famous for their wooden wildfowl carvings.


Living on Maryland's Eastern Shore, they naturally were avid waterfowlers. Steve was 12 when he carved his first duck decoy; Lem carved his first a few years later in 1918. These were basic decoys, used for hunting.


As adults, they were barbers, although bored by their chosen trade. While waiting for customers, they began whittling wood decoys from cedar blocks. Crisfield was a waterman’s town, and there was a huge demand for hunting decoys.

Soon the brothers’ barber shop was filled with decoys and people flocked to the barber shop -- not for haircuts but to purchase the decoys. Steve did most of the carving; Lem most of the painting.


Two brothers elevated the folk art of decoy carving into a world art form when plastic started replacing wood in decoys in the 1950s.

Their decoys are highly prized by collectors.


Permanent exhibits include the Ward Brothers Workshop, the Decoy in Time Gallery, the Decoy Study Gallery, and my favorite part of the museum, the World Championship Gallery, filled with the winners of many of the contests.


As part of the museum, there's an outdoor sculpture garden with beautiful examples of wildfowl art, although there's also a chicken, not so wild, but still a fowl. 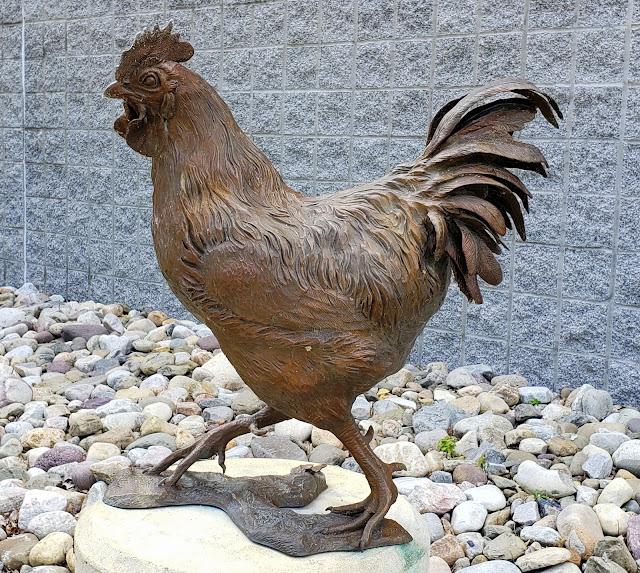