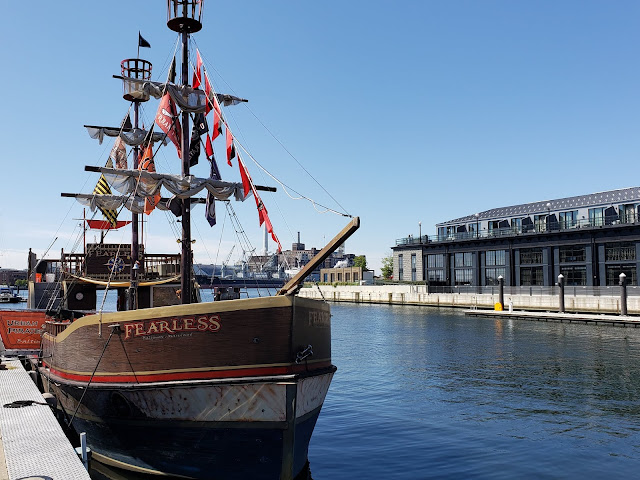 There is so much to do in Baltimore for kids -- from the serious (touring Fort McHenry) to the almost ridiculous (Ripley's Believe It or Not Odditorium) -- and Urban Pirates fits in, more in the latter category, offering an hour of crazy fun for families. Think Pirates of the Caribbean rather than Blackbeard -- that's the sort of "pirates" we're talking about here. 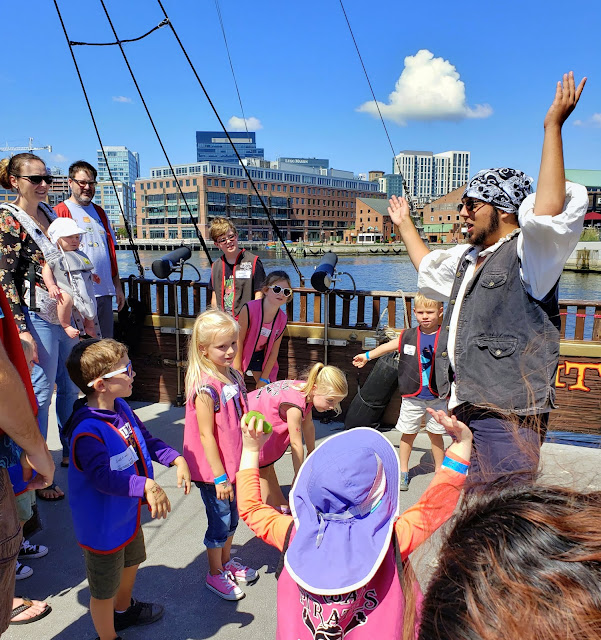 Climb aboard for a swashbuckling adventure in the waters of Baltimore’s Inner Harbor on the pirate ship Fearless. This interactive cruise is fun for families, especially those with younger kids, and includes small-kid friendly games, songs, blasting the water cannons and treasure! The kids seem to love it. Although kids, if you show enough enthusiasm, will love just about anything and join in the fun. 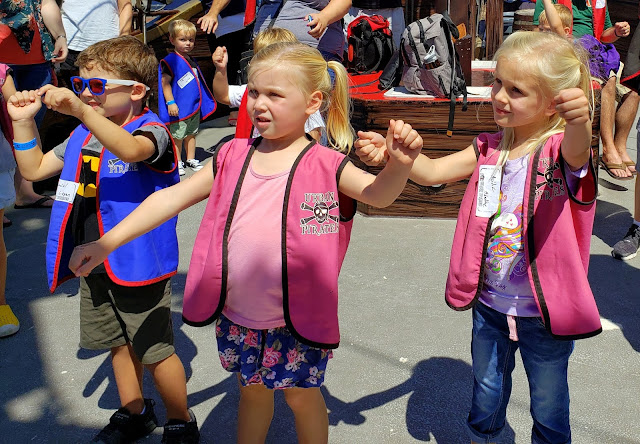 Arrrrrrg! During the cruise, essentially a party on a boat, you'll learn some key pirate-like words and phrases, although some of my favorites were ignored (ye scurvvy dog, etc.). Pirate sword fights are acted out and the children taught how to dance like a pirate... the kids had fun and the adults were in stitches over the antics of the kids. 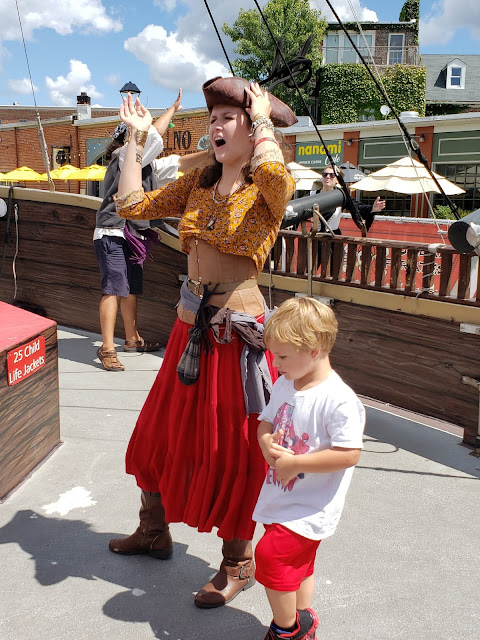 The cruise takes you around the Inner Harbor, and if you're not paying attention to the hilarity on the boat, you'll see the USS Torsk, the submarine parked alongside the National Aquarium... 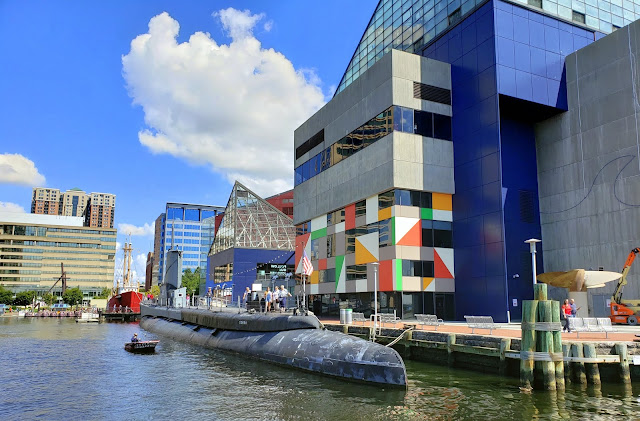 ...the Domino Sugar building, a reminder that once this harbor was a very serious and businesslike place indeed .... 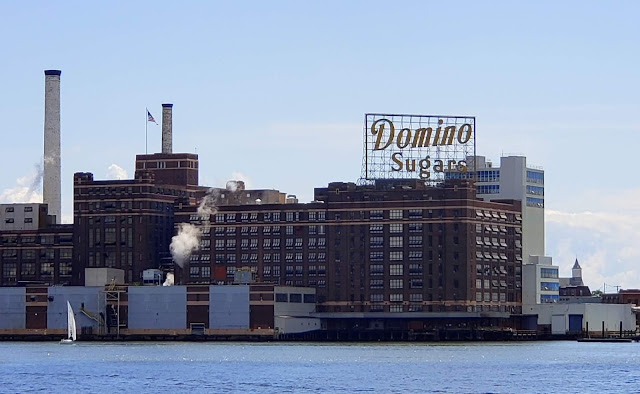 .... and other iconic features of Baltimore's harbor. 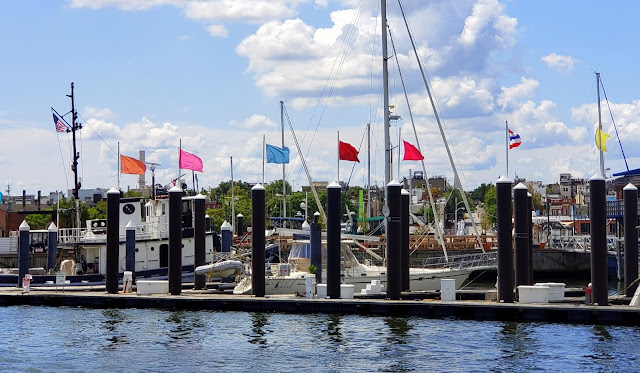 Yo ho ho but no bottle of rum -- save that for the Bring Your Own GROG Cruise for adults only! This is a great activity for younger kids -- the crew is engaging and energetic, and there's lots of interaction, from dancing to story telling to shooting water canon on an "attacking pirate." I imagine the adults-only version, with BYO-grog is similar, except drunken and some adult humor. 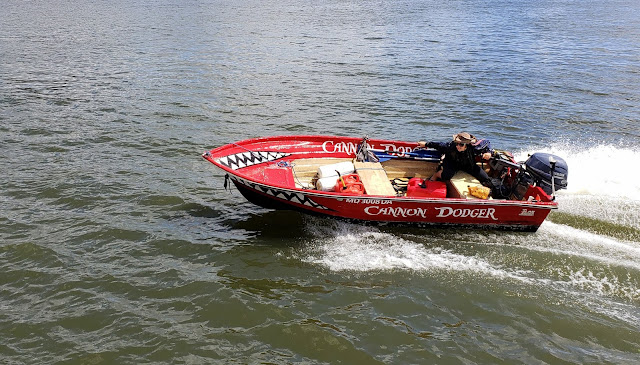 At one point on the cruise, we're asked to defend the ship from an attacking pirate by operating the water canon, aiming for the pirate on her little dingy. The kids ran to the canon and took aim, often hitting everything BUT the "attacking" pirate! 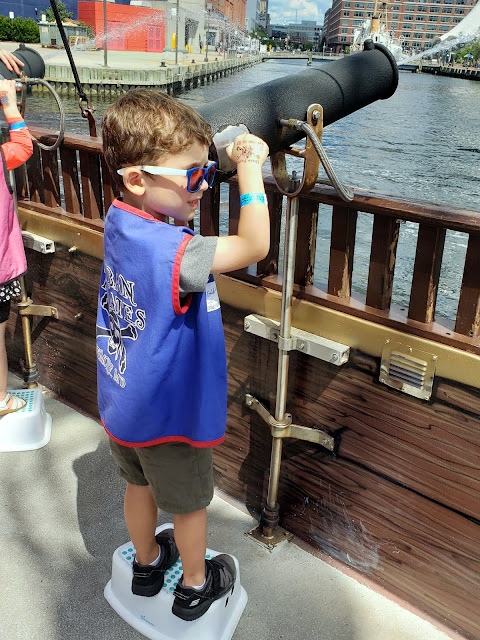 It is cheesy, but it's also fun. Unleash your inner pirate by unleashing your inner child and join in! 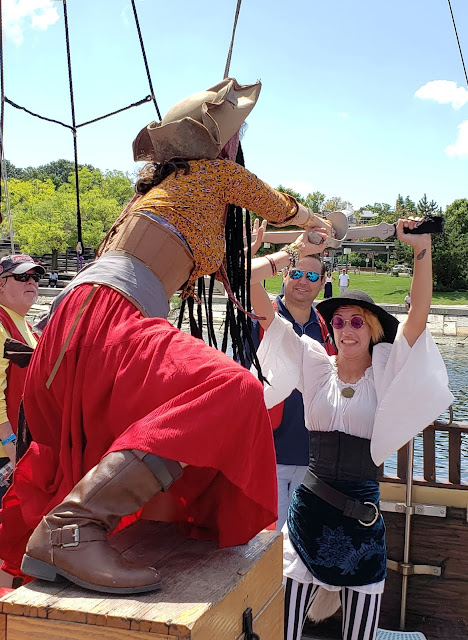 Know before you go with little children: What is actually provided on the boat: a Urban Pirate vest (only "dress up" provided), paper name tag with assigned pirate name, temporary tattoo for the kids and entertainment/games/water cannons. If your child would like more than this, bring pirate hat, face paint or accessories (think telescope, plastic sword, etc) from home OR purchase them from the Urban Pirate shop across the street. 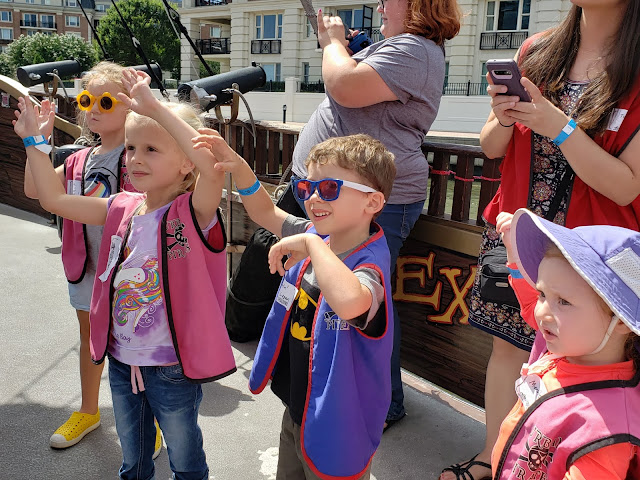 Parking: You're parking in Fells Point, so there is metered street parking if you can find it, and there is a "free lot" which is almost impossible to find a spot. Check out Parking Locations in Baltimore for more options. Leave yourself time to find a spot, and then, if necessary, walk to the check in point. 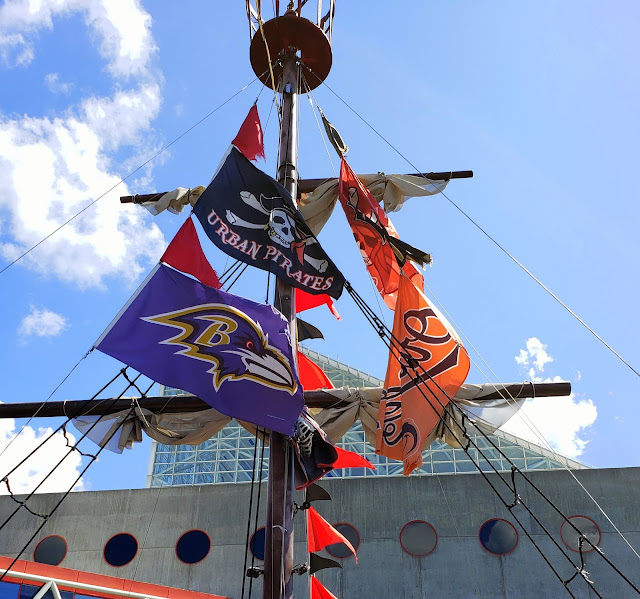 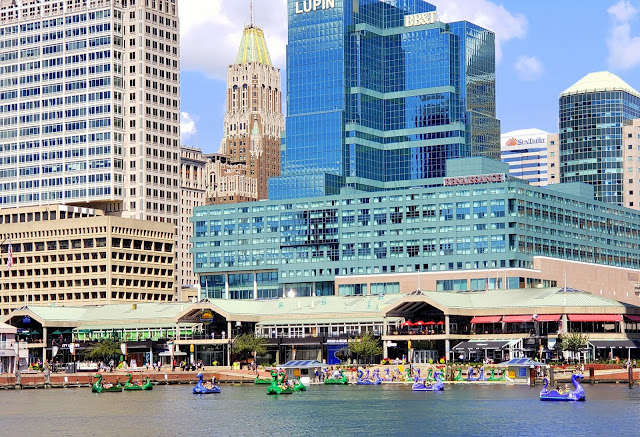