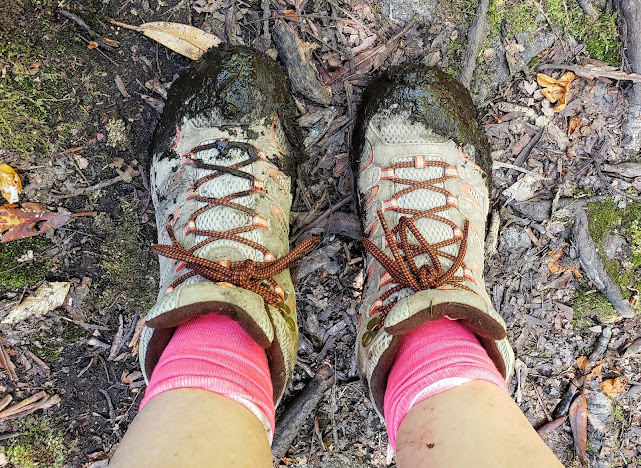 What's a little mud when the view is this? 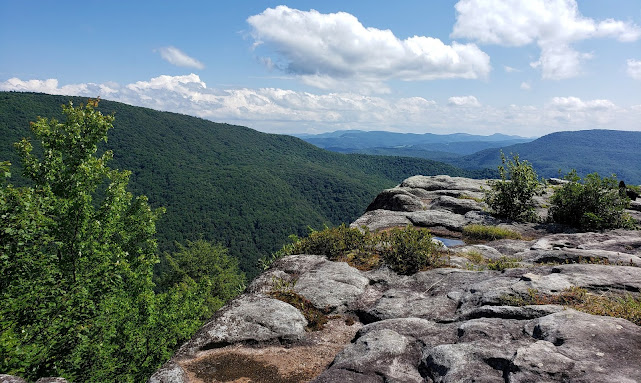 Table Rock is a massive rock outcropping on the western side of Canaan Mountain, overlooking the Dry Fork and Cheat River valleys. The hike out to it will carry you through a hardwood forest as well as rhododendron thickets; it's unlikely you'll encounter anyone else, so if it's solitude you're seeking, as well as a great view, this hike is for you! 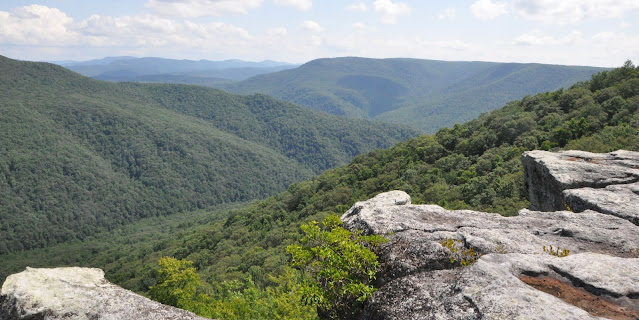 On a clear day, you can see forever! 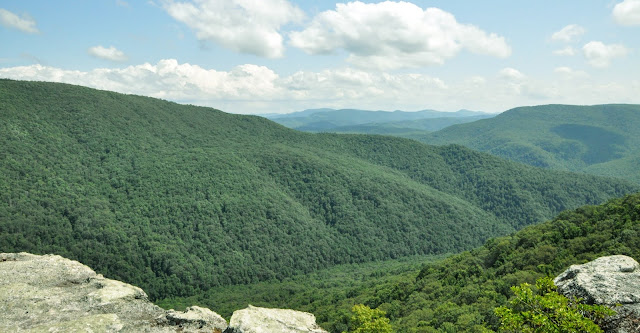 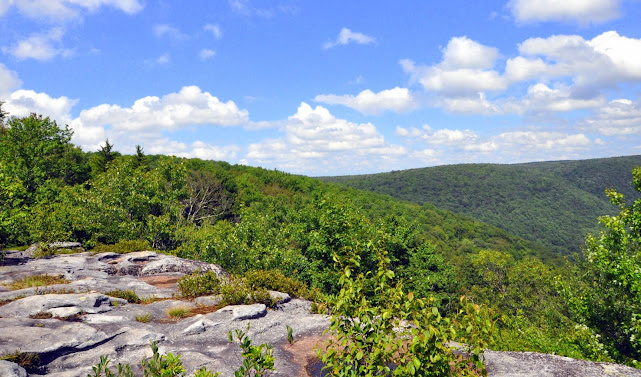 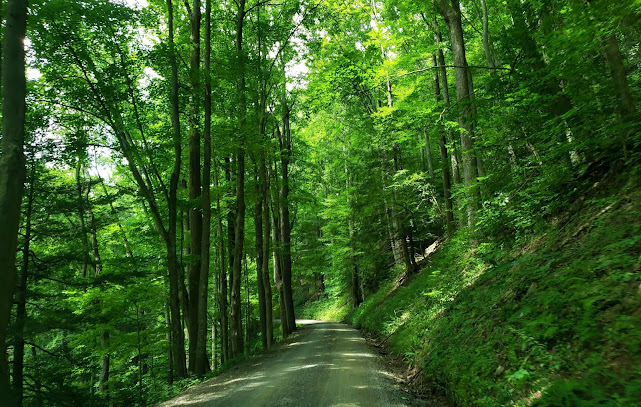 To get there, though, you'll have to travel 9.5 miles on a gravel dirt road to the trailhead -- not undoable, but there were scary portions. 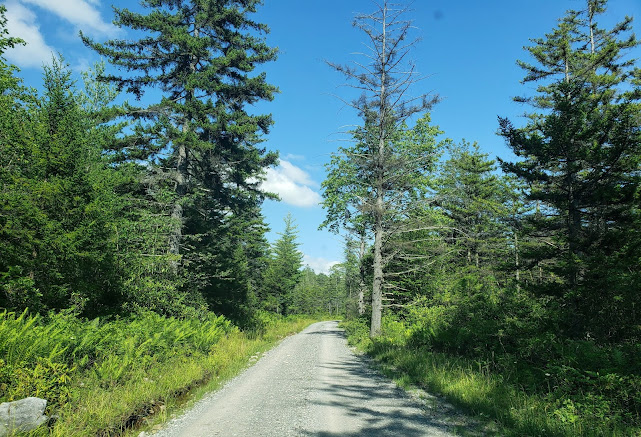 The ride is as much of the daytrip as the hike itself -- Forest Service Road 13/Canaan Loop Road travels through the Monongahela National Forest and through the backcountry of the Canaan Mountain, and along Red Run creek (or it might have been Lindy Run) -- or maybe both -- and these are lovely and enjoyable. The water is dark with tanin from leaves and pine needles and tumbles over the stones and boulders down the side of the mountain.

While you're driving along the forest road, be on the lookout for hawks and peregrine falcons -- we enjoyed seeing several during the drive to the trail head. 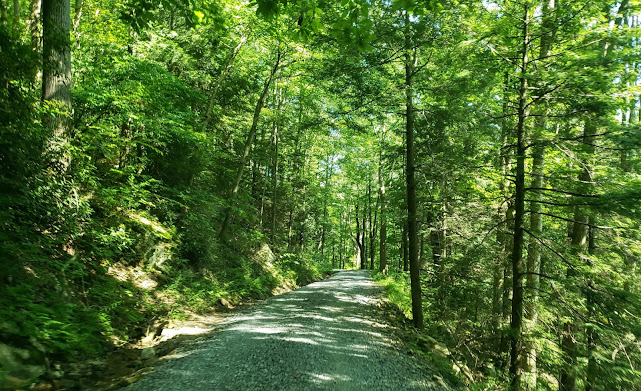 You'll spend almost as much time getting there as you do hiking. Plan an hour to travel the almost 10 miles on FR 13, because you'll be traveling between 10 to 15 mph. Although we wouldn't attempt this during winter months when there's snow and ice on the ground, during the warmer months, this is easily doable in most cars -- our Toyata RAV 4 made it easily. 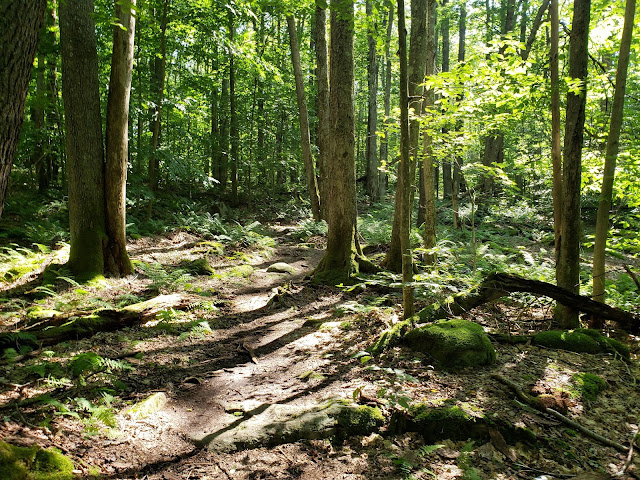 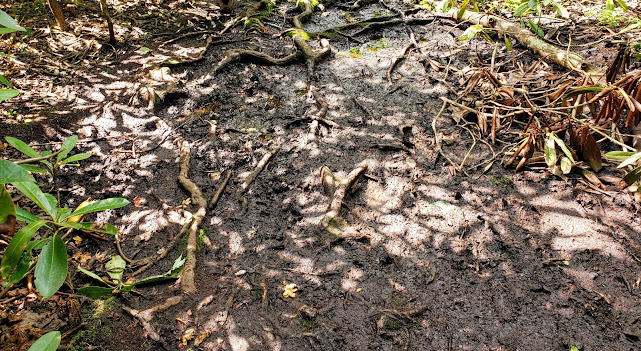 It took us an hour to get to the end because we took our time and because I also spend a lot of time taking photos for this article. On the way back, we were more careless about the mud, and walked right through it. 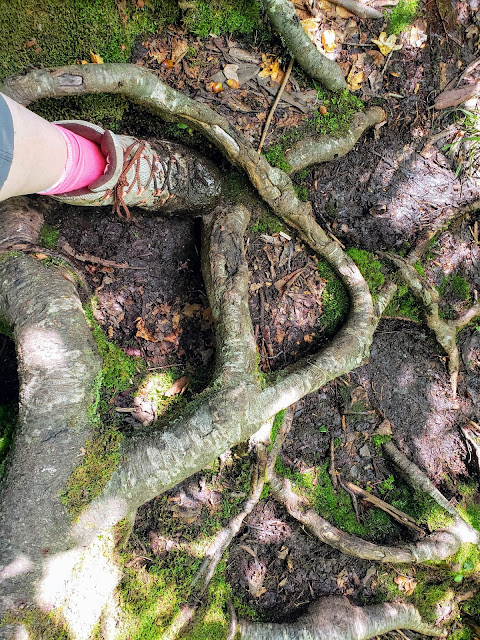 As you start hiking on the trail, you're in a hardwood forest of primarily beech, black cherry, maple and yellow birch -- making this a a great option for fall color! Although the trail lacks significant elevation gains, there are a few ups and downs to get the blood circulating. 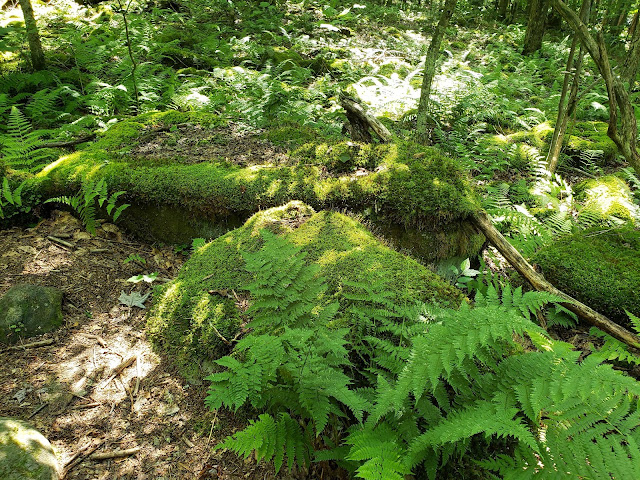 You'll notice the thick ferns and moss on the rocks and logs. 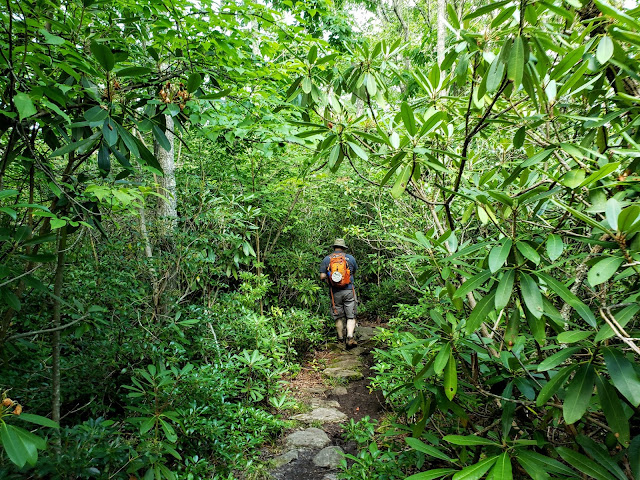 After a half mile, give or take a tenth of a mile or two, the trail carries you into a thicket of rhododendrons, and the trail gets muddy and hard to navigate if you're trying to avoid getting mud on your hiking boots. 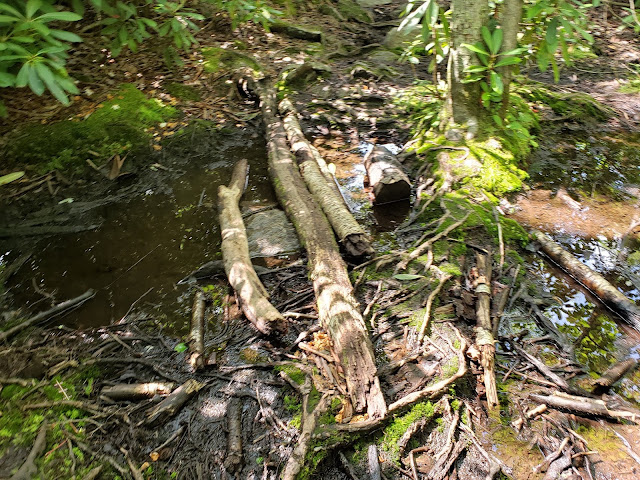 We avoided the mud on the way in, but it took a lot of time and on the way back out, gave up entirely. In a lot of spots, tree branches and rocks had been thrown into the mud pits to provide some footing out of the mud; in a few areas, new trails had been blazed to carry you around the worst of the slippery mud.

I was struck by the massive boulders, presumably from the Table Rock outcropping itself, that had tumbled down the slope, either last year or decades ago (who knows?). 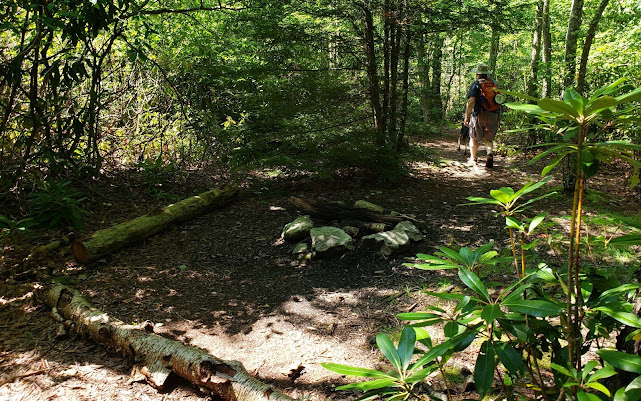 For the adventure-loving campers, there's a campsite close to the Table Rock itself. I imagine it would be pretty amazing to spend the night there, and capture sunrise and sunset from the rocks. 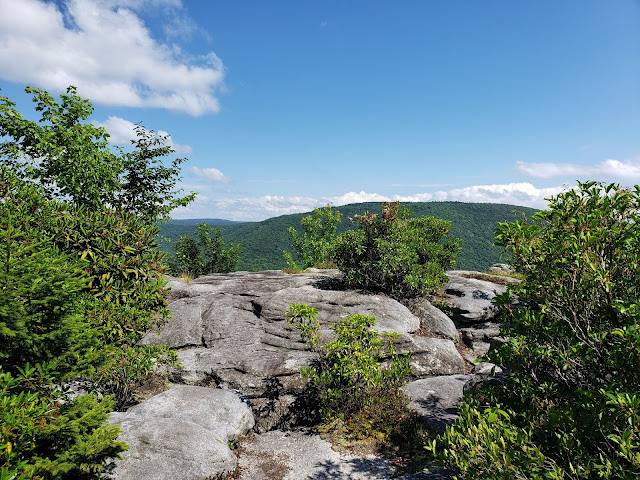 Because I'm a mom, I can't help but caution you as you climb on to the rock outcropping -- some of the crevices are wide enough for a human body, especially a child, or a dog, and go down for 30 feet in at least a couple of cases and one of them at least 100 feet, so exercise caution. We tied up our dog safely on a tree well away from the crevices. He wasn't thrilled with it, but since we were interested in bringing him home with us again, that's what we believed we had to do. 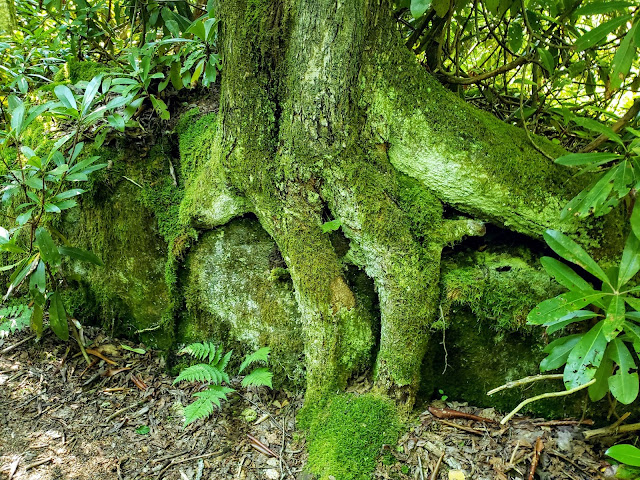 This is the second time we have hiked this trail -- the first time was with small kids, and we hadn't paid much attention to weather reports, and so when we finally got out there, it was foggy and rainy. You need to go on a clear day to really appreciate the magnificent view! 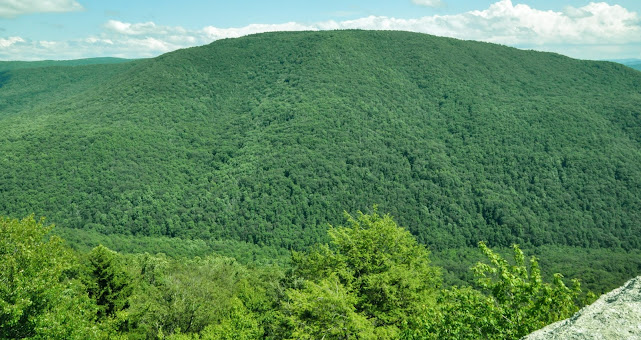 Across the valley from Table Rock is Green Mountain. As you look down, you're overlooking the Cheat River Valley; to the left is the Dry Fork River Valley. 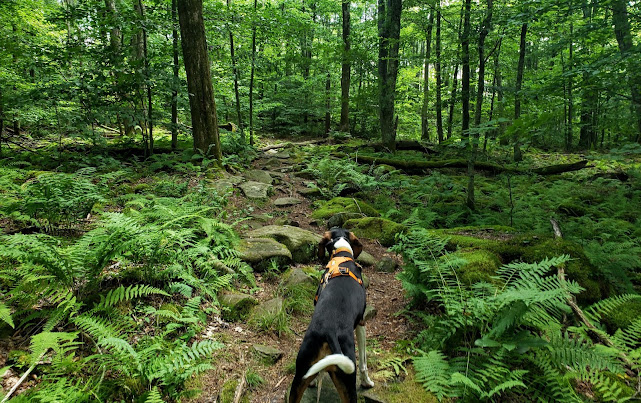 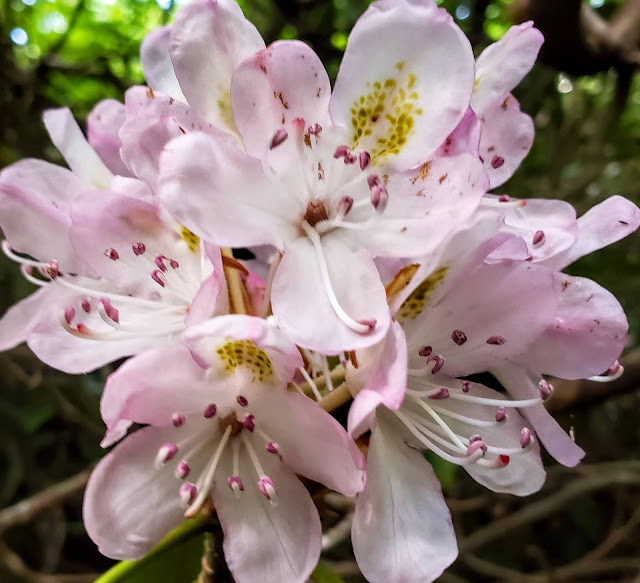 Getting there: From Davis, WV, travel south on WV Route 32 for just over 3 miles to Canaan Loop Road. Turn right onto Canaan Loop Road. Within a few feet, the road becomes gravel and narrows even further once past the few houses. Travel about 9.5 miles along Canaan Loop Road to the trail head on the left, which is marked. There's room for parking. Unlikely to have any difficulty parking there.