In a perhaps apocraphal conversation, three decades after the Battle of Monocacy, which had taken place on July 9, 1864, former Confederate Major General John Gordon was introduced to Union Major General Lew Wallace at a White House reception. Gordon was then a senator from Georgia, and he and Wallace reminisced about the Battle of Monocacy. Gordon noted that Wallace was the only general who had beaten him during the Civil War, but Wallace protested that the Confederate forces had won the day. 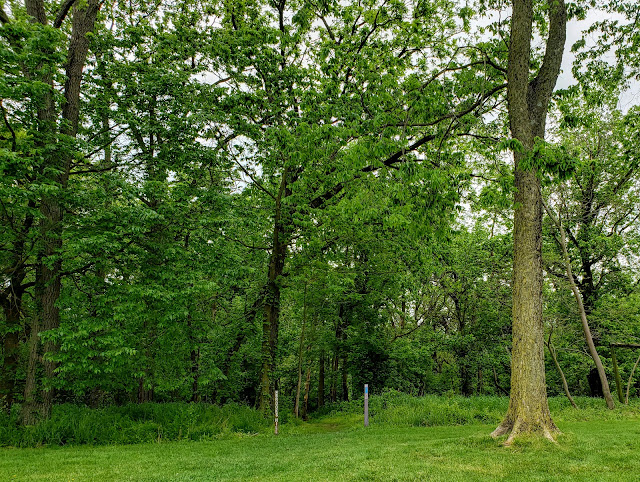 But Gordon reminded Wallace that although his side had technically been victorious, that Wallace had "snatched Washington out of our hands -- there was the defeat... the duty of driving you off the road fell to me; and I did it, but not until you had repulsed several attackes and crippled us..."

It's worth remembering that the Battle of Monocacy was the only Confederate victory in the North. But even more importantly, Wallace had delayed General Early's drive to Washington DC, while also assessing the size of the Confederate forces and ascertaining that the target was, actually, Washington DC. 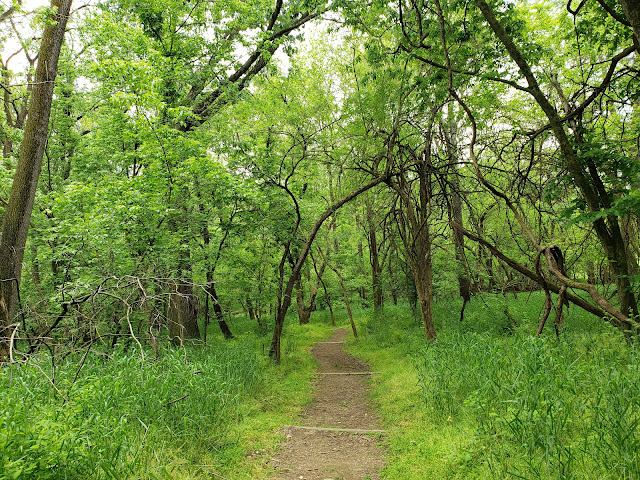 One of the best ways to learn about this battle is to walk the three farms where it took place. However, while doing so, remember that the Best, Thomas and Worthington farms are currently leased to local farmers whose crops and livestock help maintain the historic character of the landscape. Please be considerate of these farmers: do not disturb any farming tools or immplements and be alert for agricultural vehicles and activities. Do not destroy any crops under cultivation. 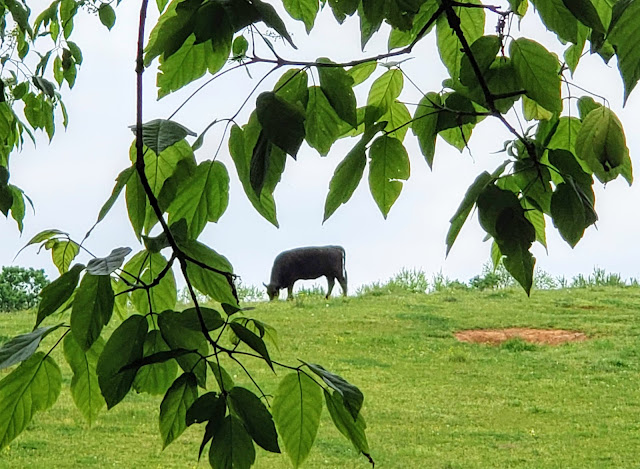 For our hike, we chose a combination of the Ford Brook Loop Trail and the Brooks Hill Loop Trail, on the Worthington Farm, for about a 3 mile hike. The 1.6-mile Ford loop trail encompasses the part of the battlefield where the Confederates forded the Monocacy River; there's a bit of an elevation gain on the Brooks Hill Loop, but it's not difficult (despite what the trail guide says) and it provides you a lovely view as you emerge out of the woods onto the farm field, where you can look down the slope over to the Best Farm barn.

The hike took us through woods and along rolling farm fields. There were some nice views, and of course, I enjoyed seeing the cows. But the real stars of the hike were the many wildflowers we saw. 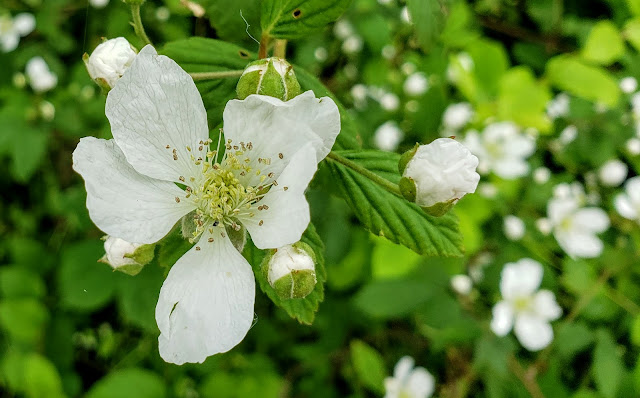 We've written about wildflowers before, including a visit to a wildflower preserve in Pennsylvania and a McKeldin Rapids and Cascade Falls hikes last year in Patapsco Valley State Park.

On this hike, we saw a number of native wildflowers, but also several invasive species, including the ubiquitous multiflora rose, which was brought originally from Asia in the late 1800s to be used as rootstock for ornamental roses. Still, it has pretty white flowers with yellow stamens. Bottom line, it is an out of control invasive which invades untended pastures, natural areas, and roadsides. But dang, it is pretty!


We also saw a single giant hogweed, a nasty plant. If you ever see one, steer clear and definitely do NOT touch! Its sap, combined with moisture (sweat??) and sunlight, can cause severe skin and eye irritation, including blistering, permanent scarring, and even blindness. We notified park officials and informed them about the location of the plant. The scary thing is that it looks almost exactly like Queen Anne's Lace, a pretty relative of carrots that is, itself, an invasive non-native plant. But note the differences: Queen Anne's Lace's flowers are flat, whereas, giant hogweed's is mounded. Queen Anne's Lace has hairy stems, whereas giant hogweed's aren't. The leaves are quite different as well. 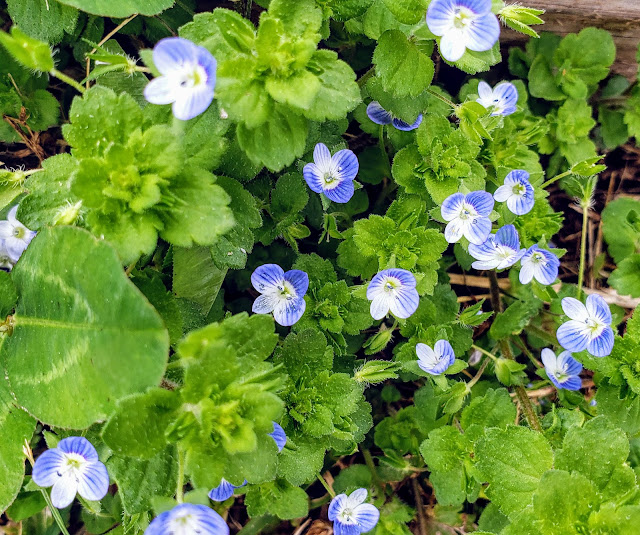 But there are also more benign wildflowers, such as forget me nots. 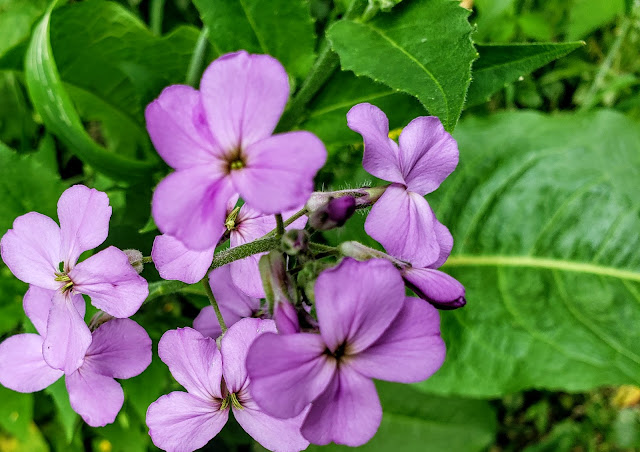 We saw lots of a pretty, four-pedal purple flower, which could possibly be moonwort or a dame's rocket. And of course, buttercups were everywhere.

Worth noting is that as the Ford Loop trail brings you close to the Momocacy River -- most of the fighting for this battle took place near the river. However, if the water level isn't too high (it was for our hike, but my guide provided me a photo she'd taken in October 2019), keep an eye out for an interesting V in the water, the remnants of a Native American fishing weir, one of the few remaining indications of Native Americans in the region. 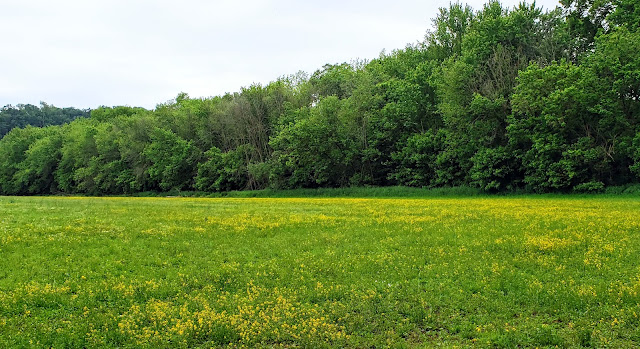 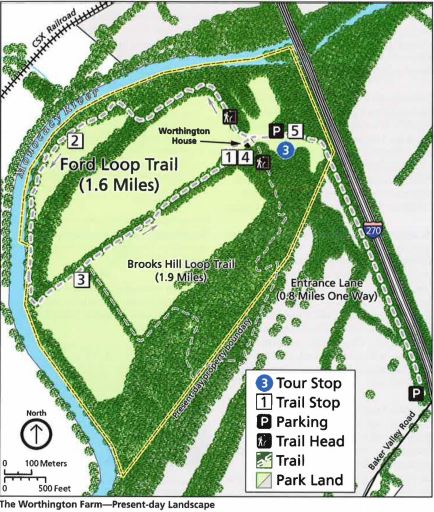 Getting there: 4801 Urbana Pike, Frederick MD

Hours: Dawn through dusk for the hiking trails; the visitors center has specific hours, so please check the website. 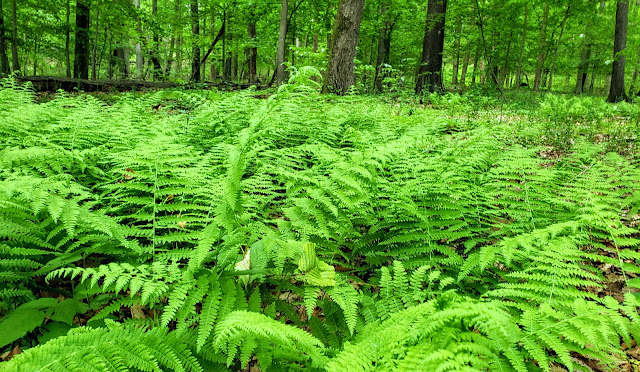 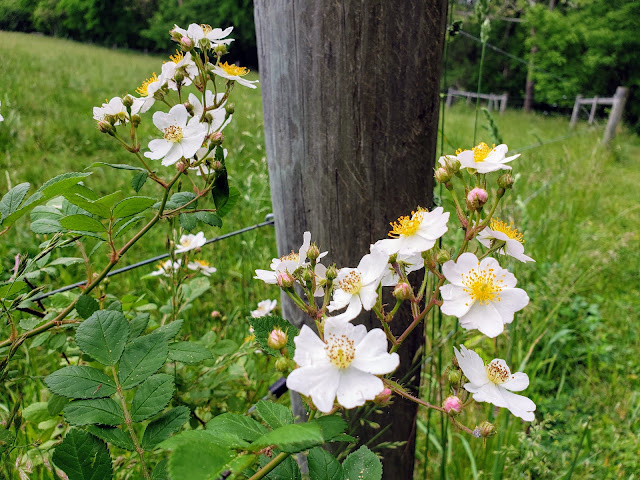