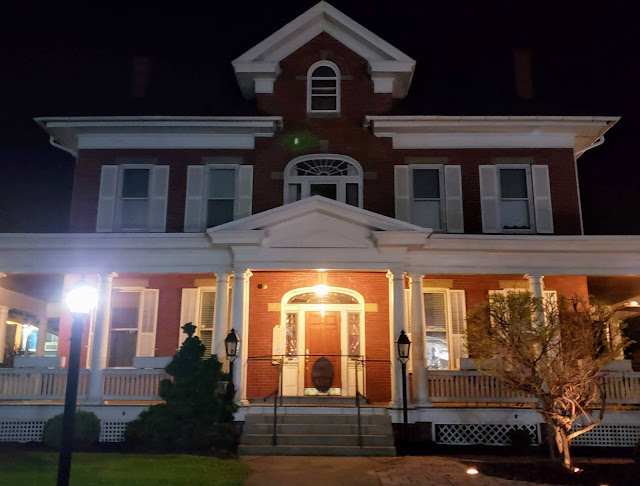 A few weeks ago, we joined Inspired Ghost Trackers in a paranormal investigation of the 1912 Historic Hoover House in Waynesboro, PA, now operated as a bed and breakfast by Pamela and Steve Barry, themselves members of the Keystone Paranormal Society and avid paranormal enthusiasts. Reportedly, the house is haunted by "warm and gentle" spirits.
The Hoover House was built as a private residence in 1912 by Ira (1870- 1938) and Ella Hoover (1867-1919) after they sold their farm, which was situated south of Waynesboro. Ira was a grocer in Waynesboro, and later became a co-owner of The Besore Dry Goods Co.
Elenore, their only child, inherited the house after their deaths and lived there until 1954.
Pamela Barry, the current owner, noted that Ira Hoover died in his bed, of coronary thrombosis. Fifteen years later, Elenore died of the same, also in the house; she was in the midst of writing a book about the history of Waynesboro.

The house passed to another family, who raised their family there, and preserved the house's original beauty for three decades, when it was purchased to be a full-service restaurant, with dining and meeting rooms on the first and second floors; the "Coal Mine," or "Mine Shaft" was opened in the basement as a casual lounge.
The restaurant lasted for a few years, and in 1987, the Hoover House was turned into a nursing home, serving as such for 15 years. In 2004, another couple, Barb and John Persun, purchased the building and opened The 1912 Hoover House restaurant in September 2005; they lived on the second and third floors of the house. However, by 2011, the restaurant had closed down and the house was listed for sale and sat vacant for over a decade.
"We were looking for a place that was [spirtually] active that would make a good location for a bed and breakfast," Pamela Barry said. "We found that here in the 1912 Hoover House."

Waynesboro is an historic town in Franklin County, PA that had its beginnings about 1749, when John Wallace, a Scotsman, settled by a spring located a few hundred yards west of the Antietam Creek (East Branch). The land passed to his sons, who soon laid out the town streets on their land and named it Waynesburg, after General Anthony Wayne, the eldest son's commanding officer in the Revolutionary War. (There were several other communities in the state with similar names and in 1831, when the federal government ruled that the names of post offices in any one state could not be duplicated, the town was re-chartered and took for its corporate title the name of Waynesboro.)

Waynesboro, because of its location on the frontier at the time of the French & Indian War (1755-1764), was in a particularly vulnerable position and was the scene of some Native American raids. Although it remained a peaceful place to live, during the Civil War, it again saw some activity when Confederate troops occupied the town as Lee's army headed north to Gettysburg; Waynesboro was under Confederate control for 15 days. 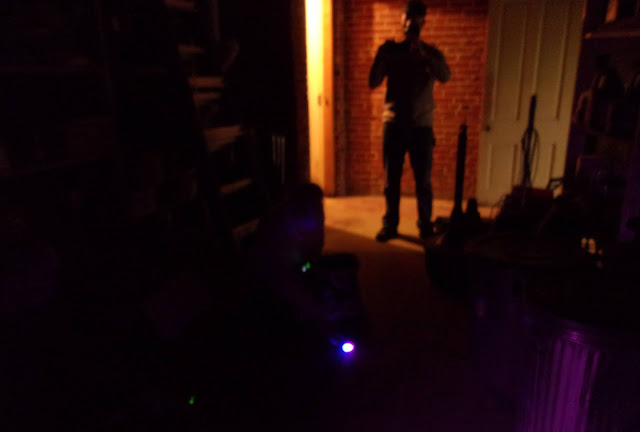 The haunts reported at the home include mist figures, a shadow that occasionally crosses the downstairs hallway, a snoring man in a third floor bedroom (the Forget Me Not Room), whispers in the third floor hallway "fucking stairs," EVPs (electronic voice phenomena) in the attic storage areas under the eves of the house, a haunted bed in the Keystone Room on the second floor, and a pinching ghost in the Holtzer Suite on the second floor. 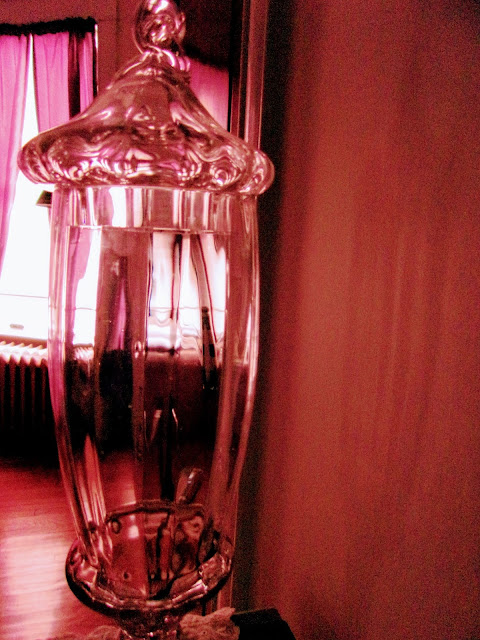 During the ghost hunt, it seemed the spirits were playing hide and seek. We started out in the Holtzer suite, and put a cat ball (which lights up when its moved or touched) on the bed. In addition, another ghost hunt participant put a motion sensor in a little kitchenette alcove attached to the room. The cat ball lit up a couple times at the beginning of our questioning session, but then remained obstinately dark. We pulled out our dowsing rods, but they moved lazily at best, and we couldn't rule out our own motion driving the rods. 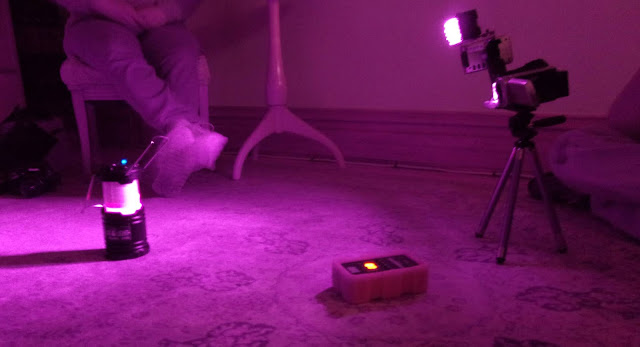 We gave up and moved on to another room, diagonally opposite the Holtzer Suite. As we laid out the cat ball, pulled out our EMF meter, and settled down in the new room, we heard the motion sensor go off in the Holtzer suite. We moved back into the Holtzer Suite, but gained no worthwhile responses. Interestingly, I saw an orb or two on my phone camera, but as I clicked to take photos, they disappeared.
We headed upstairs to the third floor, joining a portion of the other participants in one of the bedrooms upstairs. Dead quiet, so to speak. 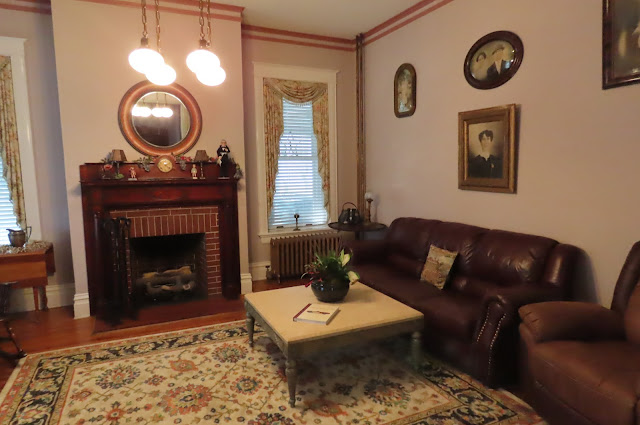 Next we moved to the basement, which the Barry's realtor said had been a speakeasy during Prohibition but had most definitely served as a casual bar and lounge in the 1980s, when the house had been a full-service restaurant. Earlier in the evening, another ghost hunter reported reactions to "whiskey" in the basement; we wondered whether former partiers were reliving their inebriated excesses in either the speakeasy or the bar and lounge. 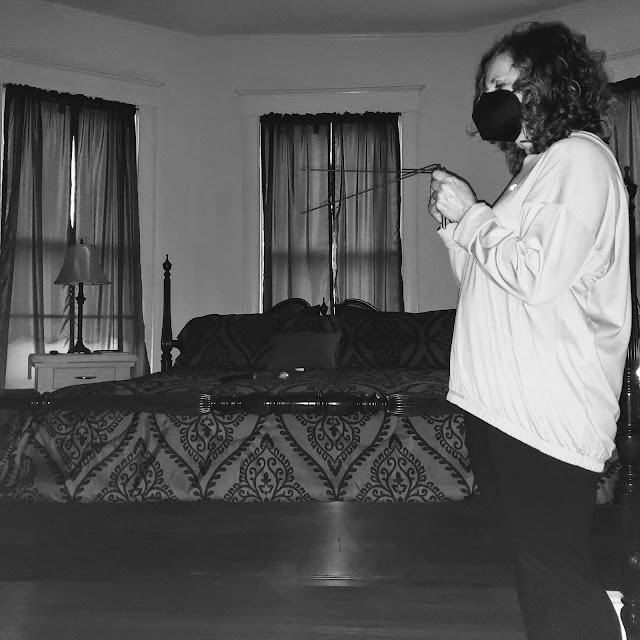 Today, the 1912 Historic Hoover House Bed and Breakfast invites you to conduct your own investigation, while staying in the historic home. What will you experience as you lay down to go to sleep in one of the luxurious bedrooms? Will the house become alive for you then? 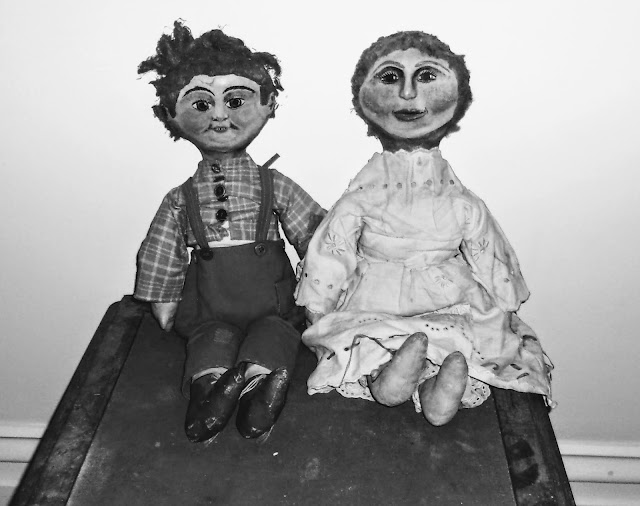 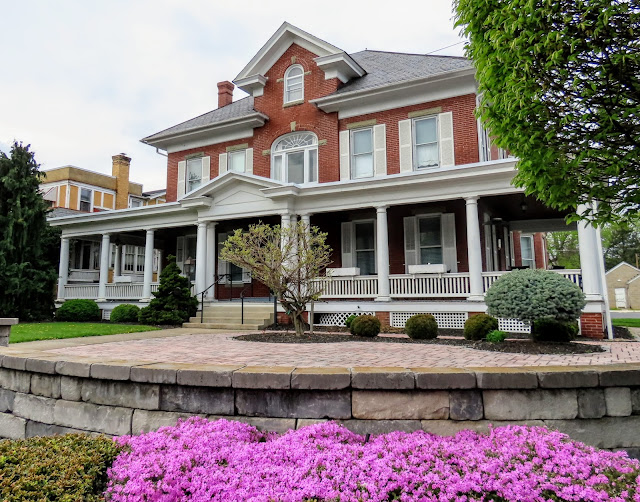