Following in the Footsteps of a Virginia Pioneer Woman: The Ann Bailey Trail

With delight, we realized we were the only ones on the Ann Bailey Trail, which carries hikers 3 miles to a scenic view overlooking the Greenbrier River valley. This delightful trail in Watoga State Park almost guarantees you solitude as you follow an old roadbed across the top of Pyles Mountain and Workman Ridge to, appropriately, the Ann Bailey Lookout Tower. This is an out and back trail, so you'll hike a total of 6 miles (which we figured out only after we were a third of the way in). 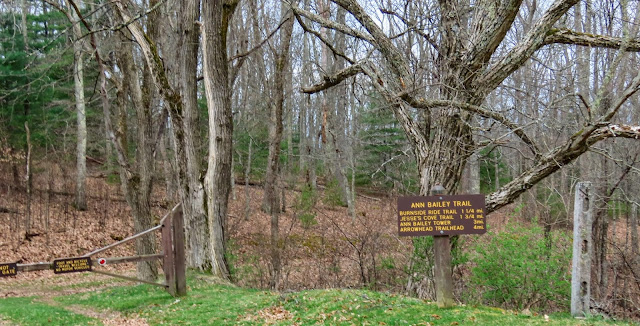 There are benches and inside the tower itself, a picnic table that offers a magnificent view with your repast. I recommend bringing a light picnic to enjoy with that million dollar view! Instead, we munched on dry granola bars for a little bit of energy.

You start at the top of a mountain (you follow a road straight past the Watoga State Park headquarters, past the Bucks Run cabin group, up past the TM Cheek Memorial Overlook, to the trailhead at the top of the mountain.

Alarmingly, from the trailhead, the trail heads down the side of the mountain, which promises a heart-pounding workout on the way back, when you're most tired, and you wonder if the last half of the hike back is going to be entirely up hill and strenuous. But although the trail heads mostly down, there are ups and downs along the way, which allow you to catch your breath.

Even as out of shape as I am, I'd say this trail was moderate at most, and the walking was easy, without having to scamper around rocks waiting to trip you up. The roadbed is wide, and although scarred by rain and some erosion, made for easy going. Although we had our walking poles with us, we didn't really need them. 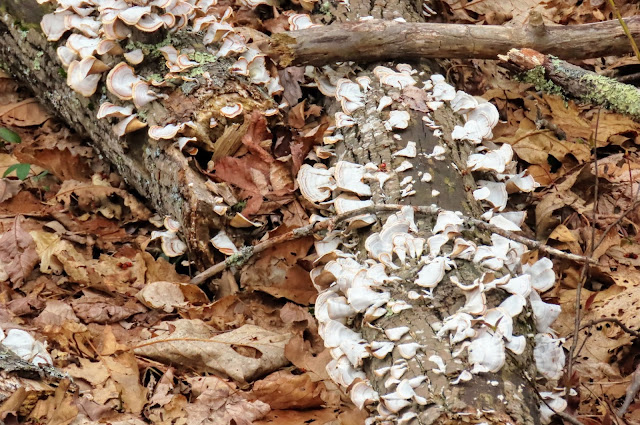 Although the payoff is a great view, not to be overlooked is the walk in the woods itself, as you follow the old road up and down the ridges. 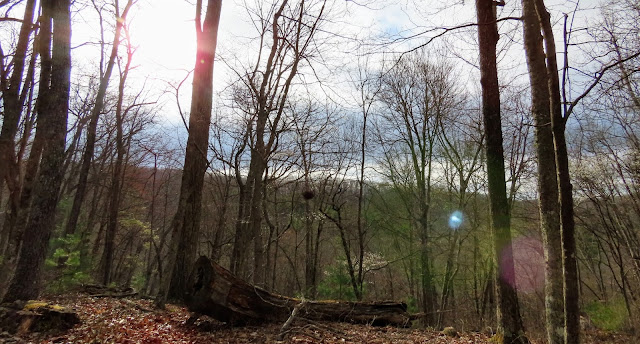 You'll notice a variety of deciduous trees as well as stands of magnificent mountain rhododendron, in addition to mountain laurel. It would be quite pretty to hike this in May or early June, when these native shrubs are in bloom. This would also be incredibly beautiful in the fall, with autumn leaves changing color. 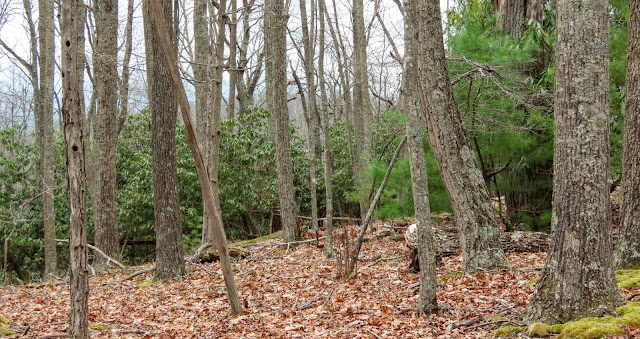 We were there in mid-April, before spring had really sprung in the area. Most of the trees remained obstinately unleafed, although a few were budding, and the service berry trees were in gorgeous bloom, showing off their pretty white blooms. With leaves not yet obscuring the views, every once in a while as we walked the ridges, we could see some breathtaking views of the surrounding mountain tops.

The park's trail map promises that the trail is blazed with blue squares, but we saw nary a one. It's clear that the trail is the old road bed, and just over 1 mile in, you start seeing a few rock cairns along the side of the road, which lend reassurance you're on the correct trail. 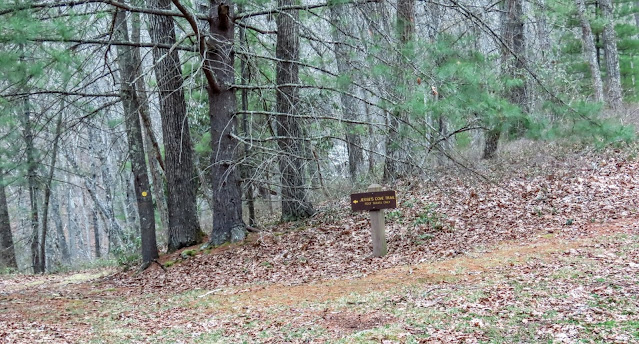 There are signs along the trail whenever another trail meets it, pointing out clearly the way to go and distances -- you're not going to get lost.

About halfway to the overlook on Workman Ridge, you'll encounter an old family cemetery -- the Workman Family Cemetery, which looks as it's being restored. We wondered if the mountain top meadow nearby was part of an old farm, and looked for remains of a house or cabin, but saw nothing that indicated such. 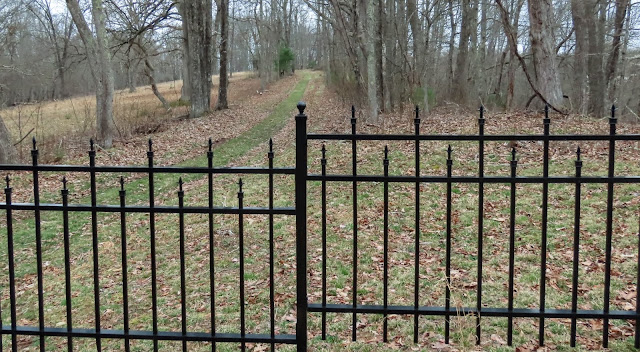 After we returned to our cabin, we read that you can see the old Workman cabin if you turn onto Jesse's Cove Trail and go for a bit (distance isn't indicated); the Workmans were apparently one of the pioneering families in the area. (Also interesting, in our drives out and about Watoga State Park, we noticed the Workman name on several mailboxes, indicating that descendants are still in the region; we also saw numerous Pyles'.)

Hiking this trail made us want to know more about Ann (alternately spelled Anne) Bailey. She was born in England in 1742 but immigrated to America, possibly as an indentured servant. By all accounts, she was a colorful figure -- her life is proof that well-behaved women rarely make history. She was a scout for the Americans, a spy, and fought Native Americans during various colonial wars against the native population, and fought on the side of Americans during the American Revolutionary War. 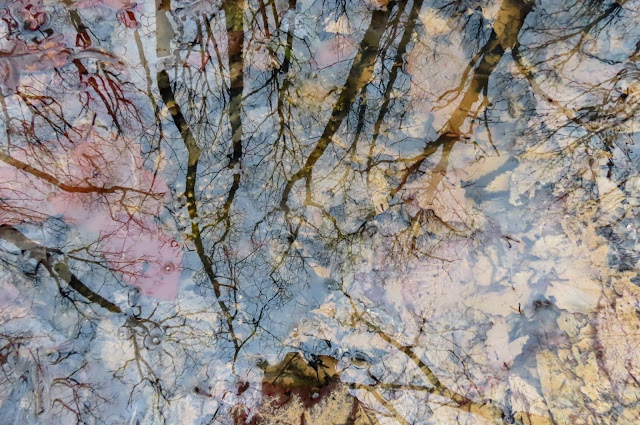 When her husband, Richard Trotter, a settler of the Shenandoah Valley, was killed in 1774 during the Battle of Point Pleasant in Dunmore's War, a conflict between the Virginia colony and the Shawnee and Mingo tribes, she vowed to take revenge -- she had a wicked temper which had earned her the nickname of "Mad Ann" -- and left her son with a neighbor and adopted male clothing, arming herself with both a rifle and a tomahawk. During this "revenge period," she served as a frontier scout and spy, and unfortunately killed several Native Americans.

In 1785, she married John Bailey, and together they moved to Charleston, WV (then Virginia), where she continued her military service at Fort Lee, patrolling the frontier against Native Americans and serving as a messenger between Fort Lee and other frontier posts. When she was 49 years old, she rode her horse for 100 miles to obtain much-needed gunpowder so Fort Lee could defend itself against an pending attack of Native Americans. She returned in 3 days with the gunpowder, and the fort was saved. 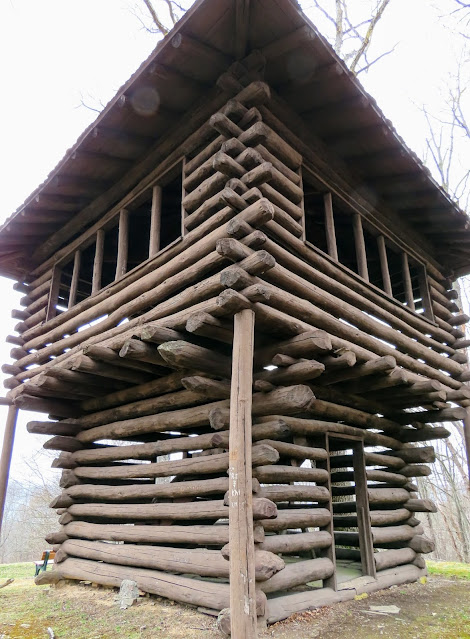 There is no indication that Ann Bailey had ever stood in the location of the lookout tower named in her honor, or indeed, even ever walked the mountains we just hiked over, but we suppose it's possible. Regardless, the hike is a pleasant walk in the woods to a wonderful scenic view, and well worth the three hours of your time it'll take to complete the hike, and the rustic, two-story lookout tower pays homage to colonial times. 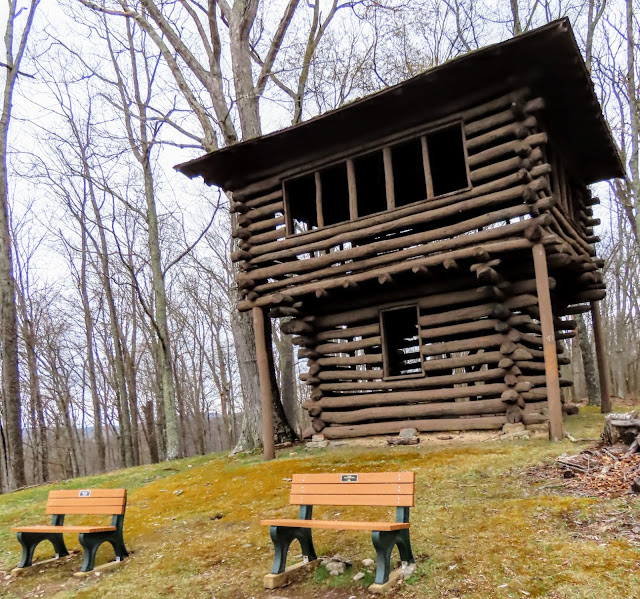 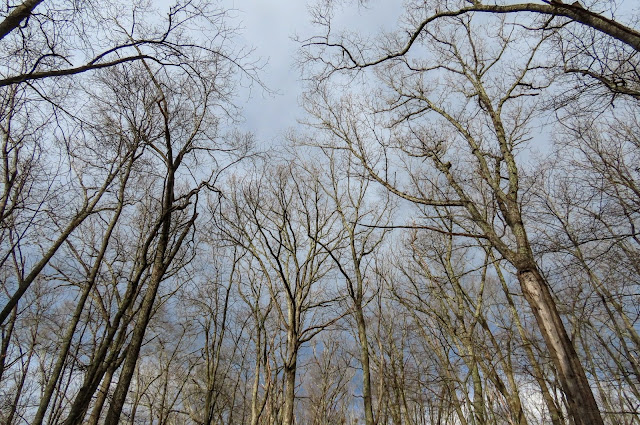