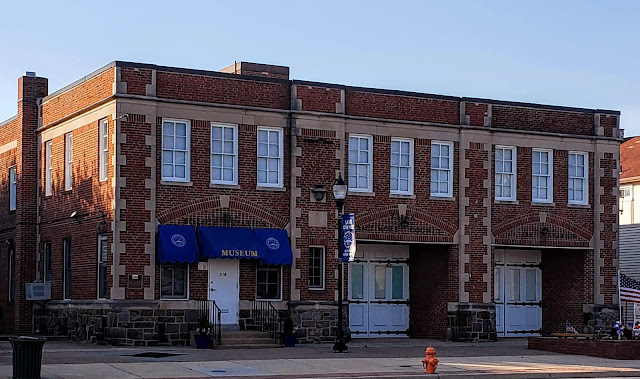 We joined about 20 other paranormal enthusiasts recently to investigate the hauntings of the 101-year old Essex Police Fire Station, now a museum run by the Essex Historical Society documenting the history of the Essex Middle River area, during an event sponsored by Ghosts N'At. 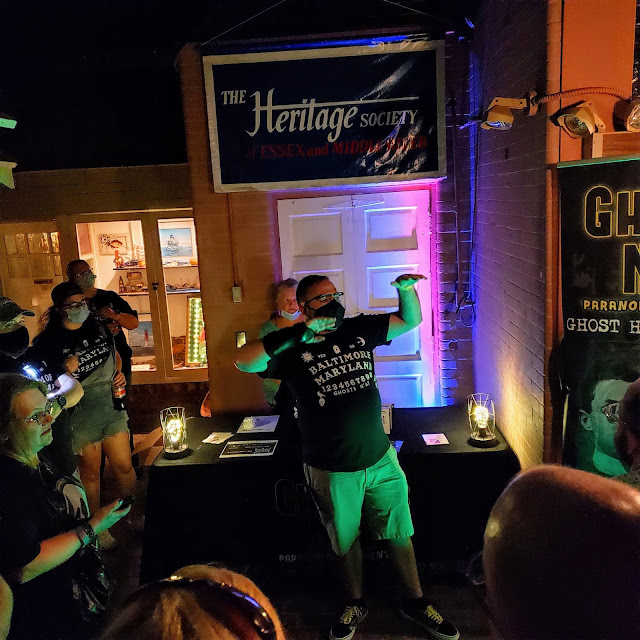 Built in 1920, the building was intended to house both a fire and a police station for the local community, which had sprang up in the area just over a decade previous. Originally, the fire station was just one-bay, with a bunk room and lockers upstairs. 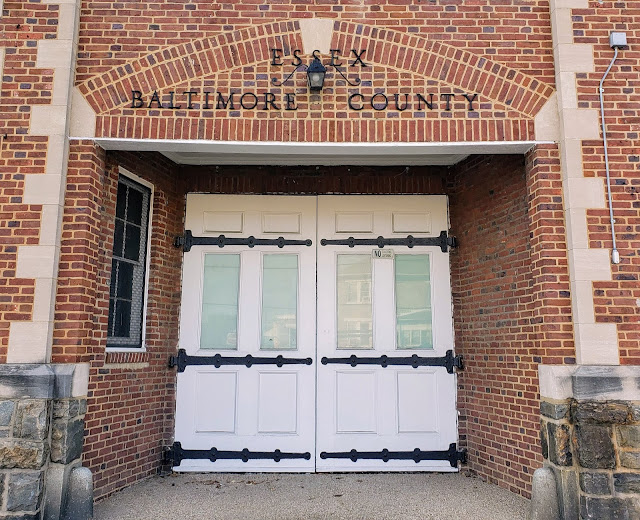 In the 1950s, a second bay was added, and the building continued its dual service until July 1970, when a new fire station was built as well as a new police station. Four jail cells -- three for men, one for women -- held criminals and delinquent individuals between the 1920s and 1970s.

When the police and fire departments moved out, a local family -- the Baumgartners -- thought the building would serve excellently as a historical society headquarters and museum, and negotiated with Baltimore County to obtain the property. By 1974, the Essex Historical Society had obtained a 99-year lease and moved in; the museum opened to the public in 1975. 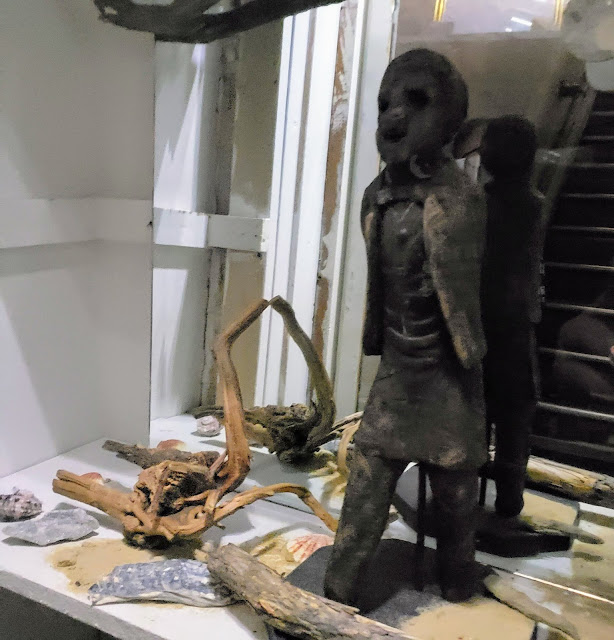 The Baumgartners and the other volunteers of the Essex Historical Society immediately began experiencing paranormal phenomena. The Moaning Man Sculpture is the most famous. This hand-carved wooden statue was excavated out of the mud of the Back River in 1971 and was one of the first artifacts collected by the historical society. Volunteers and employees of the Historical Society, as well as former police officers, have heard the statue's moans, particularly when the museum goes dark and there's just one living entity left in the building! 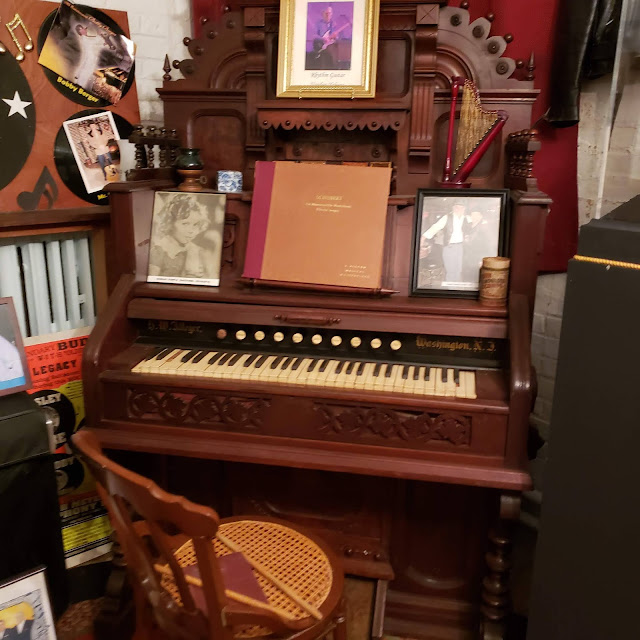 Other experiences include hearing ghostly music emanating from the "music room," a museum display that includes an organ, a piano, a violin, a phonograph, and other artifacts that belonged to inhabitants of Essex - Middle River. 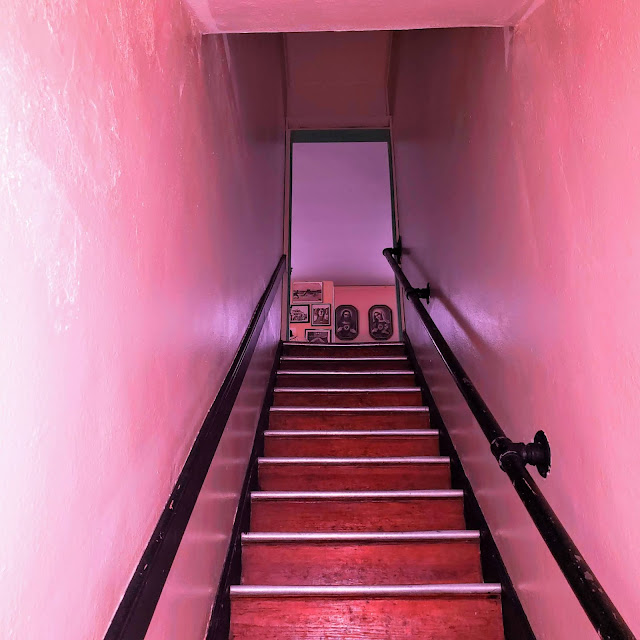 Many individuals have heard the clomping steps of a tired fire fighter, climbing the stairs to return to his bunk on the second floor.

Originally, the unincorporated town of Essex comprised of 10 blocks between Mace Avenue to Marlyn Avenue, just outside of Baltimore. It's hard to imagine now, but it was country then, wide-open spaces. The Taylor Land Company marketed Essex in 1909 for Baltimore residents who wanted a place outside the city limits to grow a garden or pursue some other rural activity. Land was cheap and the area was well-marketed for the time, with pamphlets and other advertising.

Companies seeking a good base of workers soon followed. The Glenn L. Martin Company was the most responsible for spurring the rapid growth of Essex - Middle River. Employment at the company peaked at more than 53,000 workers during World War II. In the years following, industry in the area dwindled, and much of the original Glenn L. Martin facility became the property of the State, including Martin State Airport. The remaining aerospace business followed a progression of corporate mergers and today is owned and operated by Lockheed Martin.

Sadly, the era of plentiful jobs didn't last. The area began declining when a devastating fire in August 1957 destroyed an entire block of businesses on Eastern Boulevard; the business district never fully recovered from that catastrophe. The ten-alarm blaze caused a half million dollars in damages, and, in the time it took to repair the buildings, new shopping centers were built elsewhere: consumers' buying habits changed. 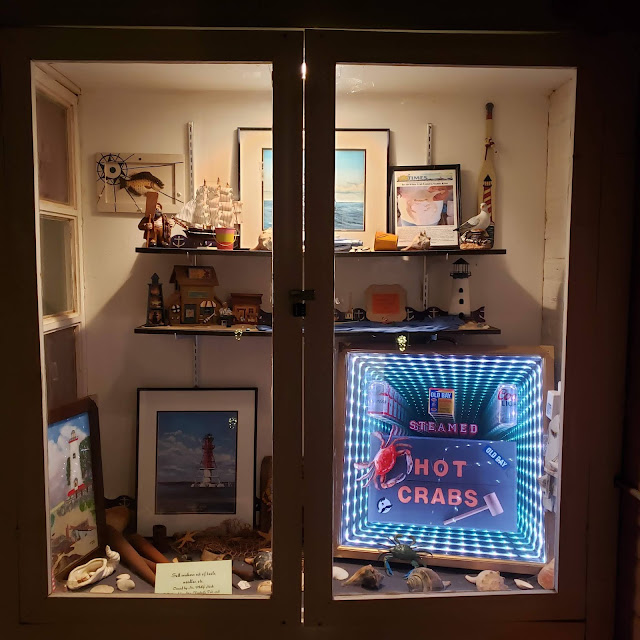 After splitting into four small groups, we headed to our first stop -- the "Avenue," located in the two former truck bays of the fire station. There we set up our cat balls (of course), as well as a teddy bear that lights up in either green or red, and began conducting an spirit box session. The spirit box rotates rapidly through radio station frequencies; often, if you ask a question, you can hear voices answer in brief one or two word responses. 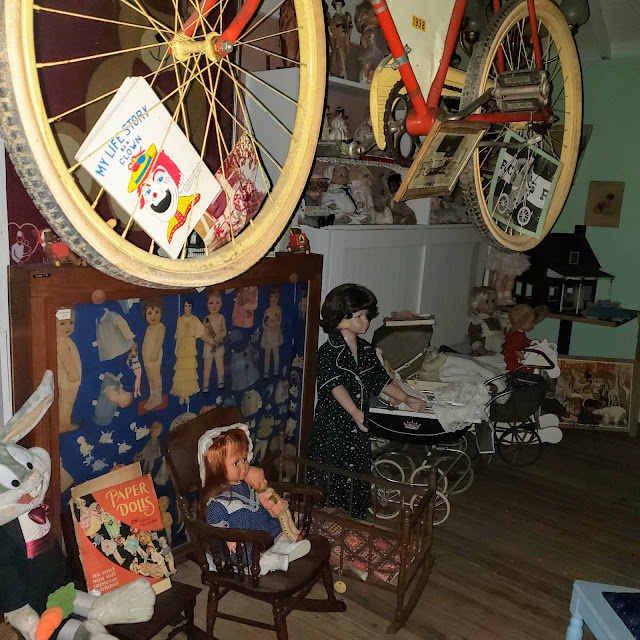 Because of the building's location right on Eastern Avenue, a major thoroughfare leading directly into Baltimore, conducting EVP (electronic voice phenomena) sessions was not practical. Although this is a favorite ghost hunting technique, it's impractical when in a noisy environment. So we depended on spirit boxes, or spirit box apps. 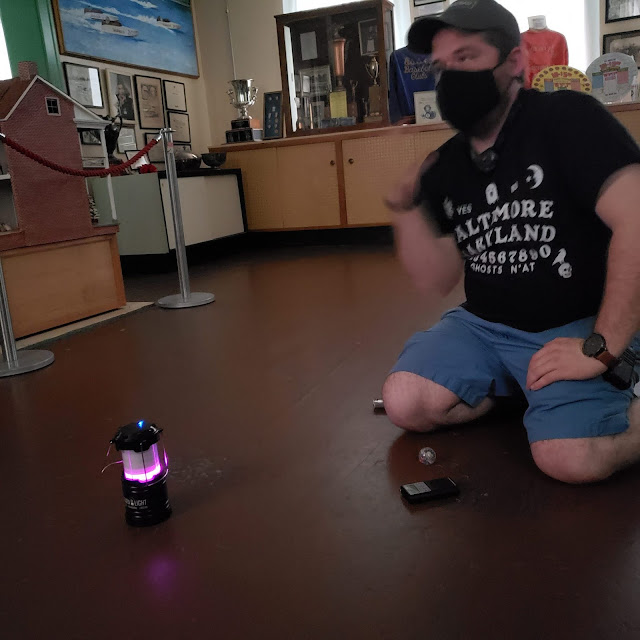 Throughout the evening, we experienced a variety of things: a rope and stanchion protecting an exhibit suddenly began rocking back and forth, although no one (visible) was near it. We heard odd bangs coming from rooms where there weren't any people. And some names came through the spirit boxes: Ralph, Greg, Alfred, Jim, Freddie, among others. When asked how many spirits were in the building, the answer was a very clear "twelve." 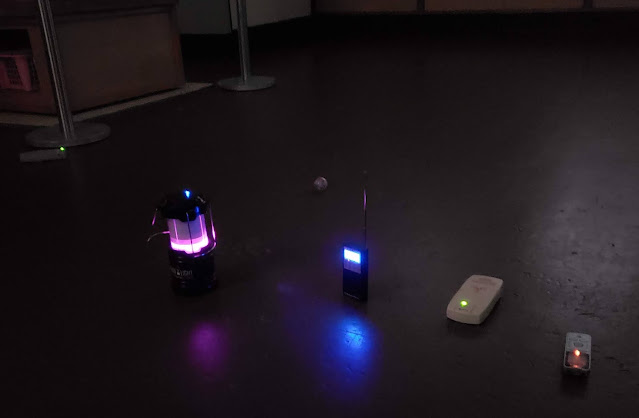 The jail cell hallway seemed to be the most active, and was where I caught the only interesting photo of the day, possibly of an orb. We heard rustling in one of the adjacent cells, but we couldn't rule out a mouse or rat foraging through. It was still creepy. 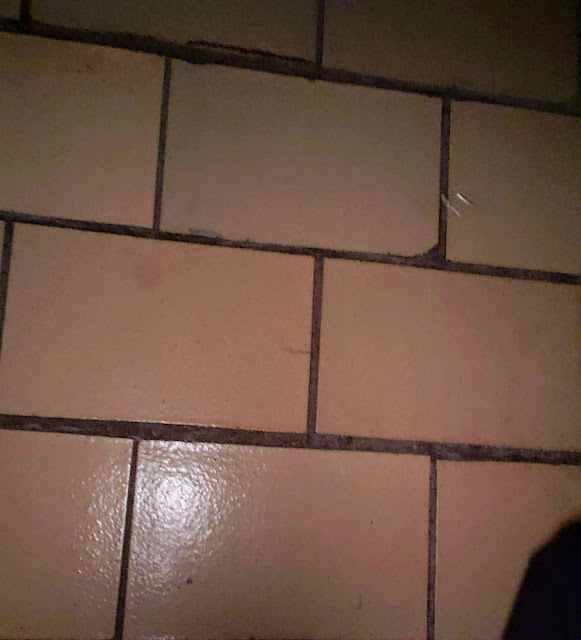 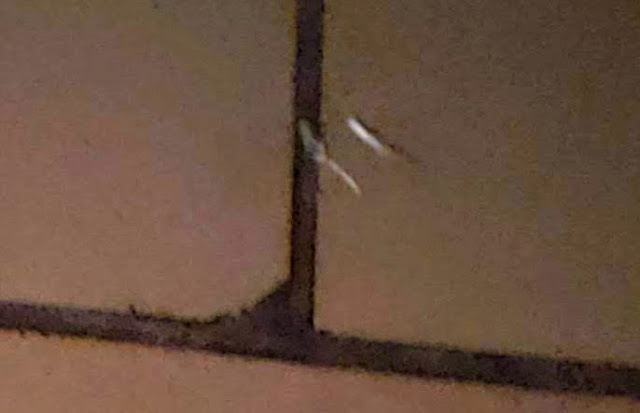 I remarked to a friend of mine recently that ghost hunting isn't at all like the horror movies would make it seem -- there's no "starting incident," nor a logical or gradual build up of momentum leading up to a final climax. There's instead, maybe a blip or two, tantalizing you. And then a lot of nothing. You wait. You ask some more questions, you try a different "tool" (none of which, by the way, have been at all reliably proven to be at all successful in either communicating with spirits or reliably indicating their presence. 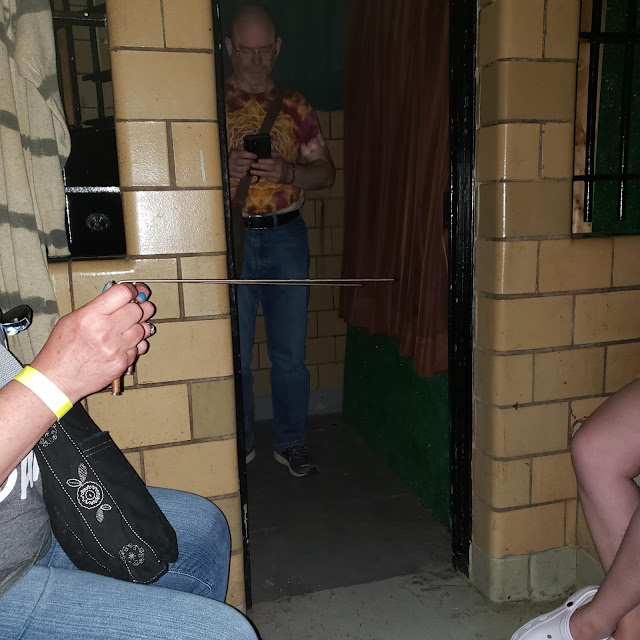 But it's fun. And there seem indications, whether via EVPs or spirit boxes, or to lights, that intelligently respond to the questions we ask. And that, I guess, is what draws us to explore these cool locations after dark, when those who walk there, walk alone.

Getting there: 516 Eastern Blvd, Essex 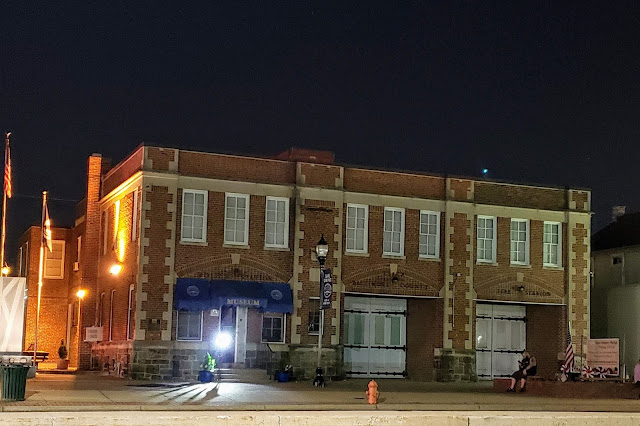