The Secret Flower in Skyline Caverns You Must See to Believe! 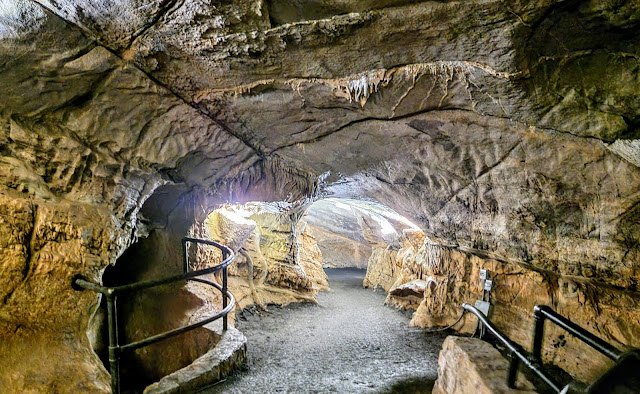 Skyline Caverns is a series of geologic caves and a tourist attraction located in Warren County, Virginia, one mile south of Front Royal. 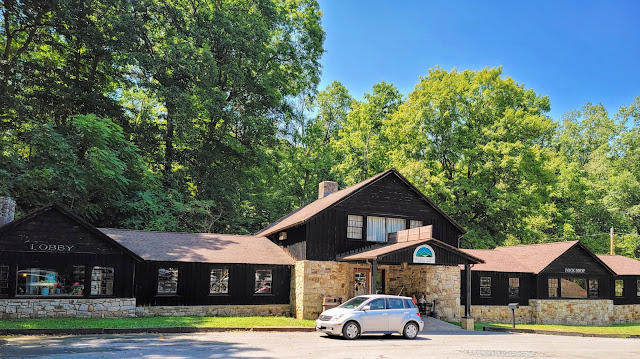 Unlike other caverns in the area, Skyline Caverns were discovered on purpose -- a retired geologist went searching for them. Walter S. Amos went sniffing around for caverns that could be commercialized in the mid-1930s. 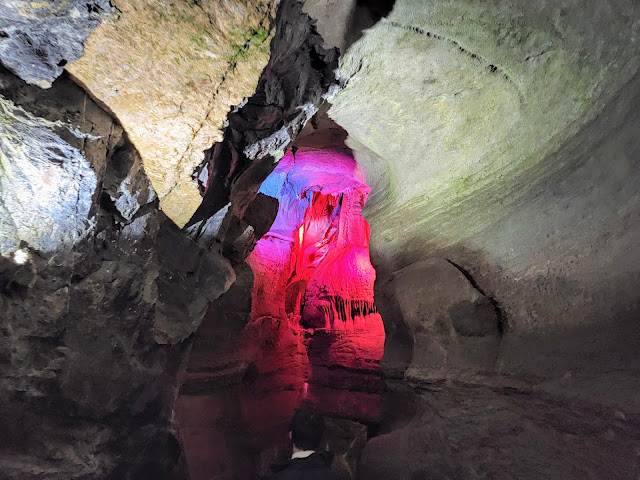 Amos was contracted by several private and government agencies to search for caves and caverns to open in conjunction with Skyline Drive -- Front Royal is just a few miles away. During his search, he came across a sinkhole that was located approximately where the parking lot is today. 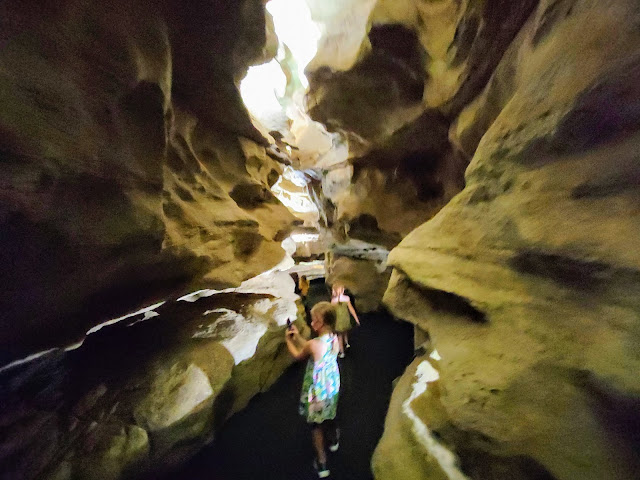 He knew that most sinkholes are created by a cavern roof collapsing, taking the ground above with it. There should have been water in the hole as well, but there wasn't, which meant the water had another channel to drain -- so then he knew he'd discovered a cavern. 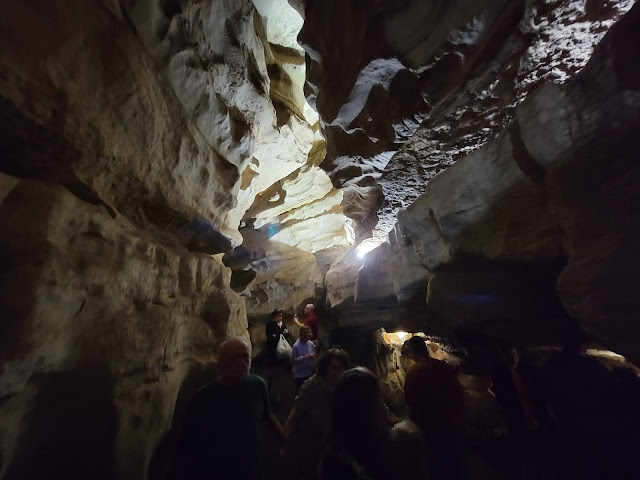 He searched for an opening, and discovered it when he found a bunch of ugly bugs -- cricket spiders (I've had them in my basement, they're "good" bugs but about as evil looking as they come). Cricket spiders love cool, damp and dark spaces -- caverns and basements! 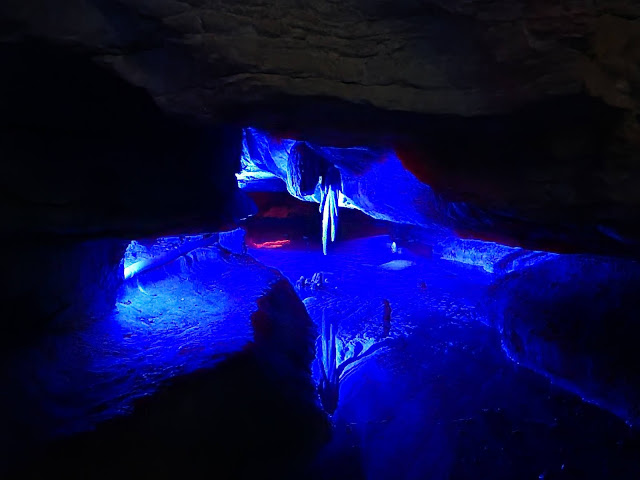 He found the caverns on December 17, 1937. The caverns opened up two years later. 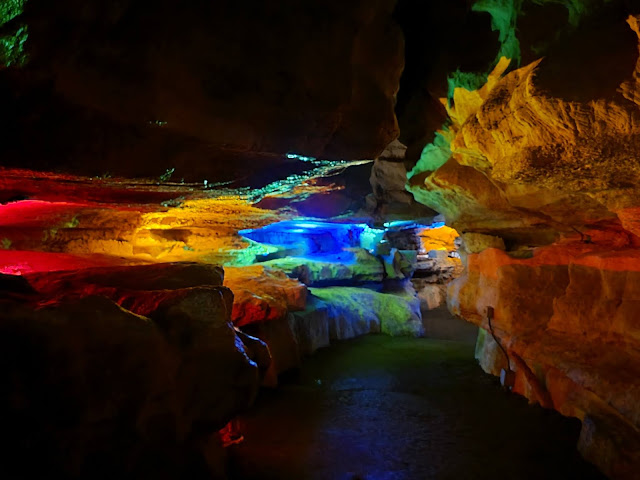 These caverns are relatively youthful, compared with other caverns, such as Luray Caverns, which are tens of millions of years older. 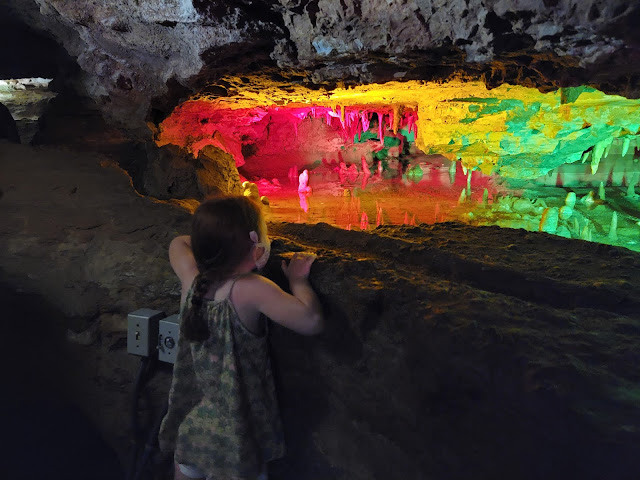 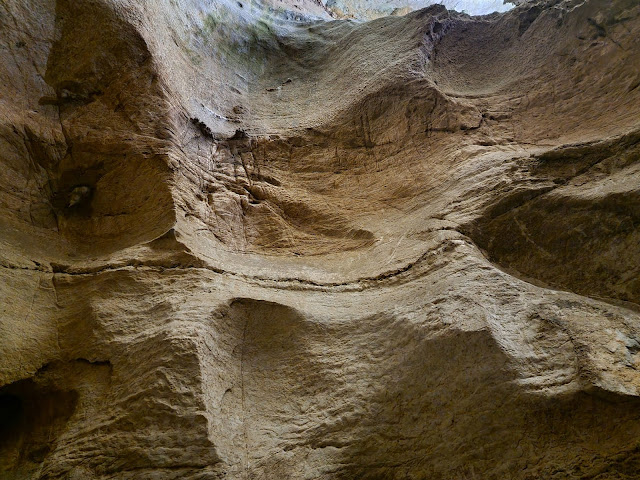 Many of the rocks are bare and the cave clearly shows how underground flowing rivers carved out the caverns. 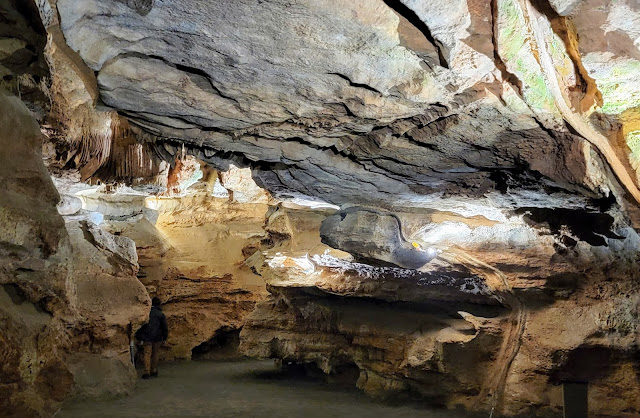 The guided tour makes much of the colored lights set up -- the lights definitely make exploring this cave fun. 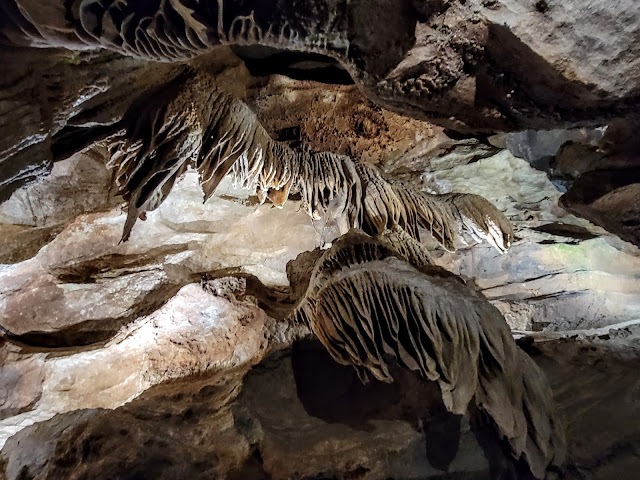 Like all commercialized caverns, the tour will take you to imaginatively named features such as the Capital Dome, Rainbow Trail, the Painted Desert, the Wishing Well, the Grotto of Nativity, Cathedral Hall, and Fairyland Lake. 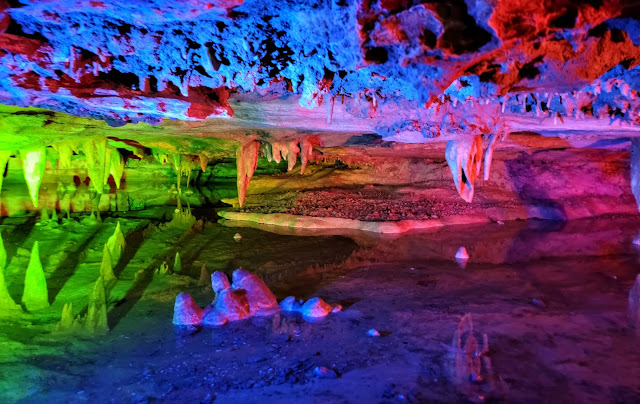 This is a fun cavern to visit, but what makes it really worthwhile is something that I don't think appears in the other caverns in the Shenadoah Valley. Sometimes called cave orchids, anthodite ceiling formations make this cave one to visit. Only a few other caverns in the United States can brag about having this rare formation. 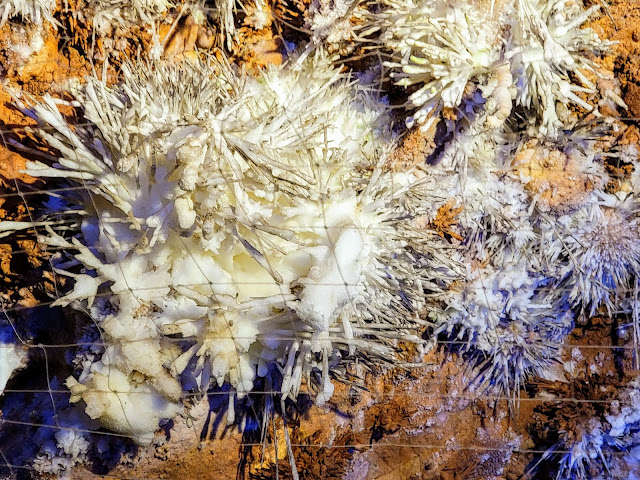 Anthodites are an unusual form of crystal, a perfect six-sided crystalline structures made of pure calcite, and "grow" from the ceiling. 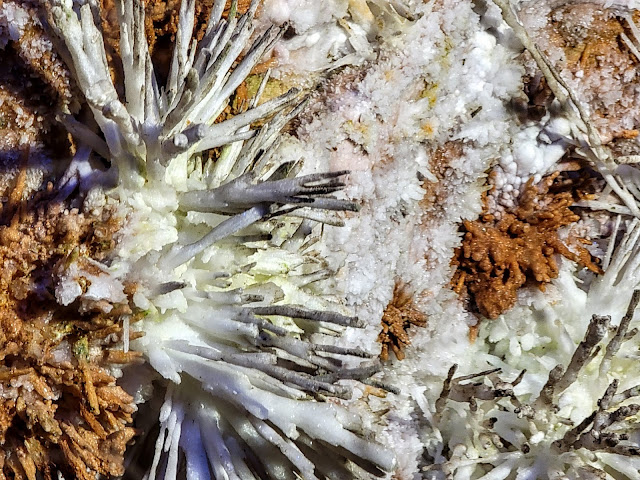 Of course, the tour makes much of these -- and leverage colored lights to make these even more exciting. 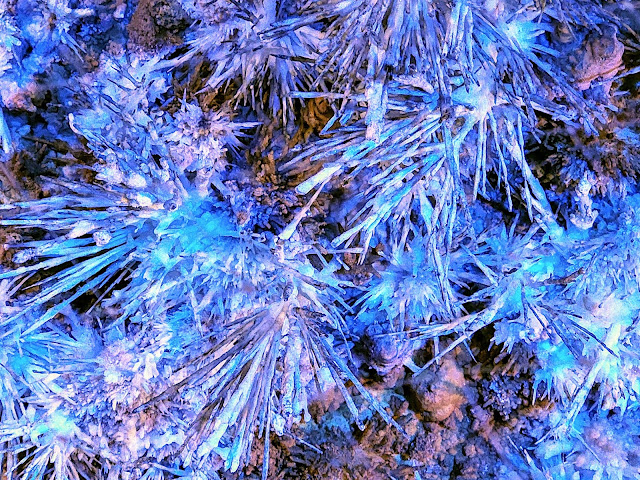 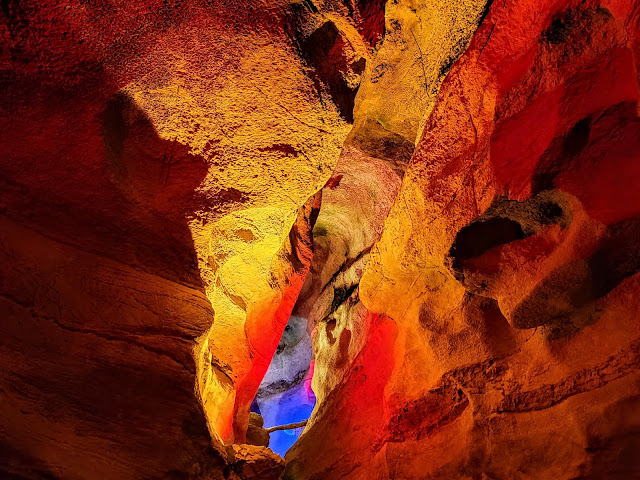 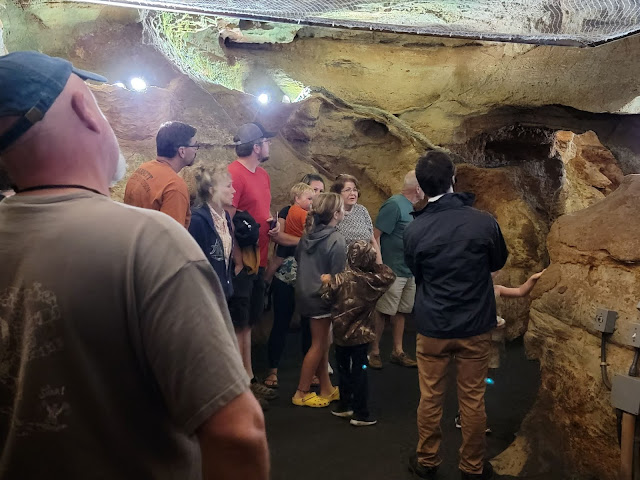 Looking for other daytrip ideas in the Shenandoah Valley? Check out: 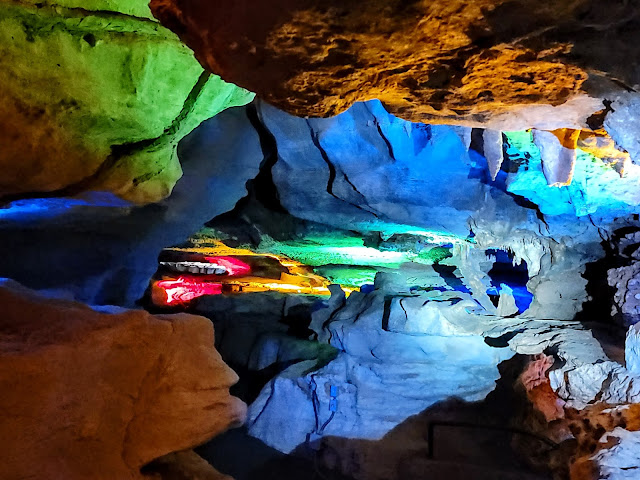 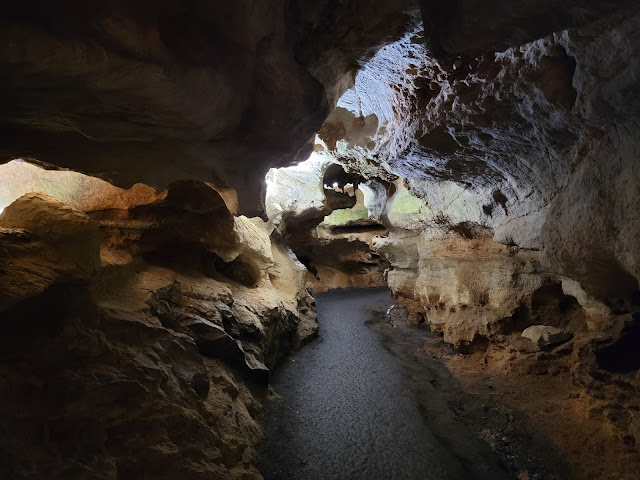