I've discovered that when I tell some people I just toured a cemetery and had a lot of fun, the expressions on their faces cause me to wonder whether they think I'm a creepy death-obsessed devil worshiper. Other people exclaim "Cool! Why didn't you bring me along?" A couple weeks ago, my friend and I went on the Candlelight Tour of Mount Olivet Cemetery, in Frederick, MD. Ghosts were mentioned, but it's not your average walking ghost tour. 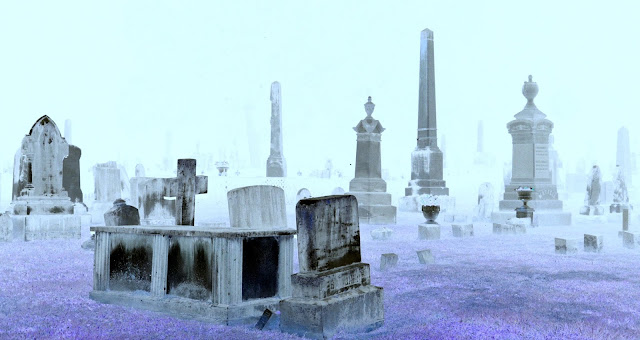 Of course, cemeteries are great places for ancestry research. The day after my friend and I toured Mount Olivet Cemetery, I found myself hunting two specific gravestones in cemeteries in rural Adams County, PA, looking for the final resting place of my first American Spertzel ancestor, Michel, and his wife, Mary Day. 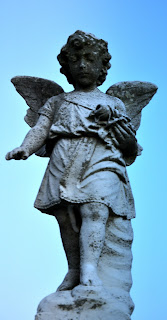 The candlelight tour of Mount Olivet is more about history than ghosts -- appropriate for a cemetery inhabited by the likes of Maryland's first governor, the nation's first First Lady, the author of the national anthem, and a spitfire old woman memorialized in a poem penned by John Greenleaf Whittier. You'll also learn about some of the symbolism portrayed in tombstones, and why metal tombstones are the best and why there are not that many around. I was startled by the quantity of freemason symbols depicted on the various tombstones.

There's a peaceful beauty amongst the tomb stones in Mount Olivet Cemetery, and I understand now why some folks jog or walk the paths through the cemetery frequently. I may add some other historic cemeteries to my travel list!


In the early 1850s, well before the outbreak of the Civil War, Frederick had many cemeteries adjoining churches. As the city population grew, so did the churches and their congregations. The cemeteries were rapidly reaching their capacity for burials, and the preference was to dedicate the more central land for the living. Thus, it was decided that a new cemetery, called Mount Olivet, would be established on the outskirts of the city to serve these churches as well as the entire City of Frederick. 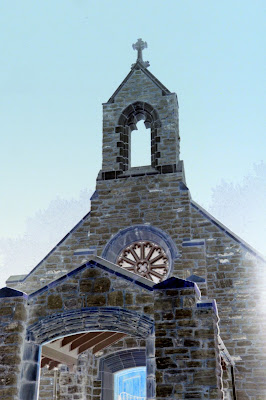 The most prominent grave is that of Francis Scott Key, and you can't miss his and his wife's final resting place as you pass through the cemetery gates. Although his body originally was interred in Baltimore, where he died while visiting his daughter, he was moved from there to rest in the "shadow of Catoctin Mountain," which he'd apparently requested. From there our tour guide brought us over to the lovely stone chapel, noting that it was built for just $7000 just over a hundred years ago. This quaint little chapel was frequently used for memorial services until funeral homes became established a few decades after the chapel was built, and it gradually fell into disuse and disrepair, until a few years ago, when a group of concerned citizens raised $30,000 to restore it. Now the chapel is available for both funeral services and weddings.

It is rare to have an opportunity to legally visit a cemetery at night. How dark they are! The harvest moon hadn't yet risen the night we were there -- and there was only a few nervous flashlights to light the way for the tour group as we strolled into the dark to visit the the 300 or so Confederate graves. The individuals inhabiting those graves met their end during one of the local Civil War battles -- either during the Battle of Antietam -- about 14 miles away -- or the Battle of the Monacacy, just 2 miles away.

Frederick, of course, served as a hospital town for both the Union and Confederate wounded from those battles. Many of those who died as a result of their wounds long after the respective armies had marched away found themselves interred in Mount Olivet, far from their loved ones and their homes. In addition, as many of the temporary graves were excavated in the years after the Civil War, the remains were moved to Mount Olivet Cemetery. There are no rows of Union graves, as Union soldiers were given the honor of being buried in one of the National Veterans cemeteries, but no such honor was bestowed on the rebel soldiers. Still, they lay beneath their flag, for the Confederate Flag flies at the Tomb of the Unknown Confederate Soldier, a few feet away from the row of 300.

One of the famous graves we stopped by was that of Barbara Frietchie, a central figure in local Frederick history (children growing up in Frederick learn about her at a very young age). According to local legend, at the age of 95 she waved the Union flag in the middle of the street to block, or at least antagonize, Stonewall Jackson's troops as they passed though Frederick on their way to Sharpesburg for the pivotal Battle of Antietam.

This event is the subject of John Greenleaf Whittier's poem of 1864, Barbara Frietchie. Sadly, although she was an ardent Unionist, the events memorialized in the poem never occurred. Not only was she bedridden the day Stonewall Jackson's troops marched through Frederick, the rebels could only see Frietchie's flag, which flew throughout the day from a distance -- and they certainly never came within speaking, or even shouting, distance of her. Nevertheless, shoot they did at the flag, and it can still be seen at the Barbara Frietchie House Museum, located at 154 West Patrick Street. From all contemporary accounts, Frietchie was an opinionated, spitfire of a woman -- and certainly would have been likely to have verbally dueled with Stonewall Jackson had she been given a chance, just as Whittier imagined in his poem. I bet Mary Quatrell, who actually did wave a flag over the Confederate soldiers, was mad when she learned of the poem and Barbara's undeserved fame. As for Barbara -- she died before the poem was published, so she never knew how famous she'd become.

The tour focused on the famous inhabitants of the cemetery and cemetery trivia. But near the end of the tour, our tour guide leaned back against a tree and shared several ghost stories. Both ghosts were observed by homeowners living adjacent to the cemetery. One featured the ubiquitous lady in white, skitting around the tombstones on the darkest nights. I wasn't impressed. The other, more touching, was about one homeowner observing three uniformed soldiers kneeling before Confederate gravestones early one morning. These soldiers then quietly disappeared before the homeowner's eyes. Interestingly, while at the Confederate graves earlier in the tour, both my friend and I noticed a strong aroma that suggested a pipe or incense, which disappeared as we moved away. Other tour participants similarly noticed a very strong, sweet aroma around another group of graves. Who knows whether that was evidence of a haunting! 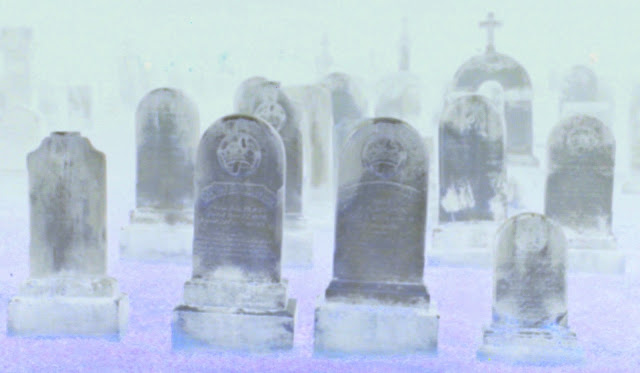 Getting there: 515 South Market Street, Frederick, MD 21701; no fee required to visit the cemetery but there are fees for the ghost tours.

Hours: The cemetery gates are open daylight hours; Candlelight tours are offered only a few times each month but now are offered regularly. Tickets go on sale 30 minutes prior to the start of the tours at the gates of the cemetery. Please check the Maryland Ghost Tours website for more information. Park across the street.

Dogs: There is a pet cemetery within Mount Olivet Cemetery; however, living pets aren't welcome. 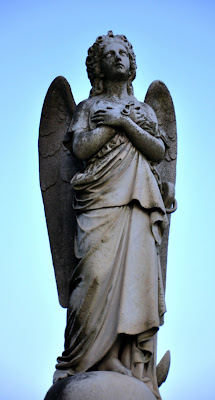 The poem about Barbara Frietchie:
Up from the meadows rich with corn,
Clear in the cool September morn,

The clustered spires of Frederick stand
Green-walled by the hills of Maryland.

Round about them orchards sweep,
Apple- and peach-tree fruited deep,

Fair as a garden of the Lord
To the eyes of the famished rebel horde,

On that pleasant morn of the early fall
When Lee marched over the mountain wall,—

Over the mountains winding down,
Horse and foot, into Frederick town. 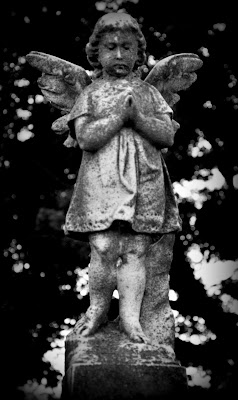 Flapped in the morning wind: the sun
Of noon looked down, and saw not one.

Up rose old Barbara Frietchie then,
Bowed with her fourscore years and ten;

Bravest of all in Frederick town,
She took up the flag the men hauled down;

In her attic window the staff she set,
To show that one heart was loyal yet.

Up the street came the rebel tread,
Stonewall Jackson riding ahead.

Under his slouched hat left and right
He glanced: the old flag met his sight. 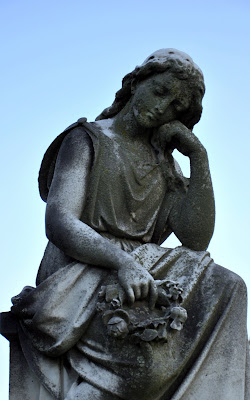 It shivered the window, pane and sash;
It rent the banner with seam and gash.

Quick, as it fell, from the broken staff
Dame Barbara snatched the silken scarf;

She leaned far out on the window-sill,
And shook it forth with a royal will.

“Shoot, if you must, this old gray head,
But spare your country’s flag,” she said.

A shade of sadness, a blush of shame,
Over the face of the leader came; 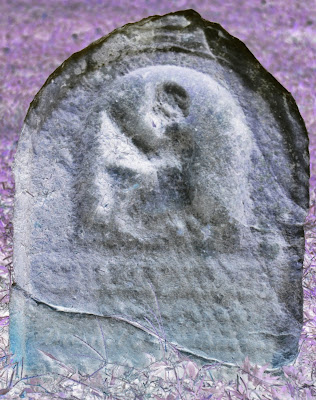 The nobler nature within him stirred
To life at that woman’s deed and word:

“Who touches a hair of yon gray head
Dies like a dog! March on!” he said.

All day long through Frederick street
Sounded the tread of marching feet:

All day long that free flag tost
Over the heads of the rebel host.

Ever its torn folds rose and fell
On the loyal winds that loved it well;

And through the hill-gaps sunset light
Shone over it with a warm good-night.

Barbara Frietchie’s work is o’er,
And the Rebel rides on his raids no more.

Honor to her! and let a tear
Fall, for her sake, on Stonewall’s bier.

Over Barbara Frietchie’s grave
Flag of Freedom and Union, wave!

Peace and order and beauty draw
Round thy symbol of light and law;

And ever the stars above look down
On thy stars below in Frederick town!