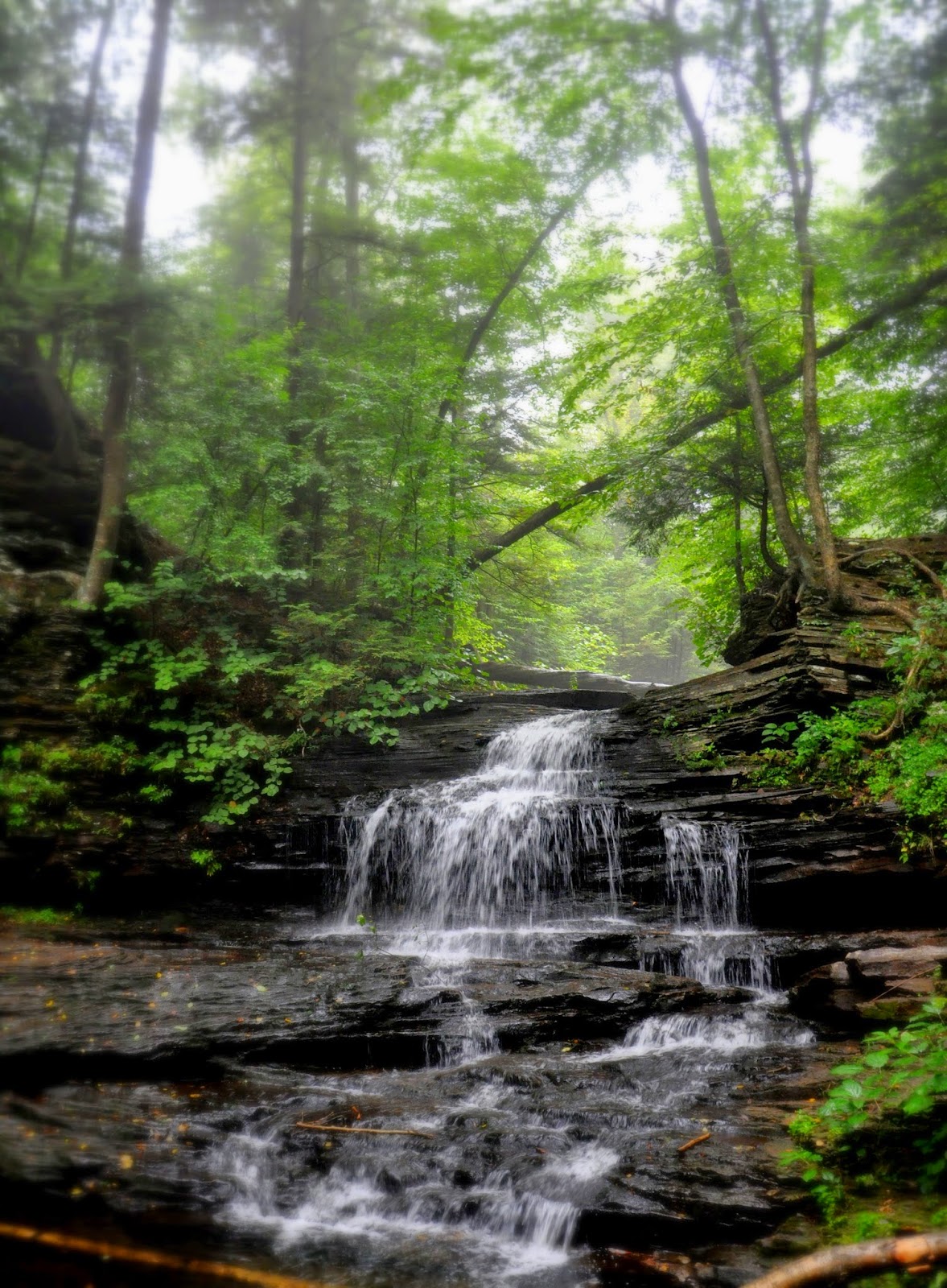 Ricketts Glen State Park is a Pennsylvania state park on more than 13,000 acres in Columbia, Luzerne, and Sullivan counties. The park also is a National Natural Landmark, known for its old-growth forest and the more than 20 named waterfalls along Kitchen Creek.

I was enticed by the number of waterfalls in such close proximity. How many times have I hiked several miles for just one beautiful waterfall? Ricketts Glen State Park offered the possibility of just a 3.2 mile hike and 18 waterfalls!

After reading all the reviews about this trail, I was a bit intimidated by how "dangerous" and "difficult" it sounded. So it was a pleasant surprise that this trail is not all that difficult, as it turns out. It has some steep stairs built into the trail, and if you're not in the best of shape, a walking stick would help. We went slow -- both to take lots of photos and to soak in the beauty and because it was a bit slippery in the rain. That's the way to do this hike. 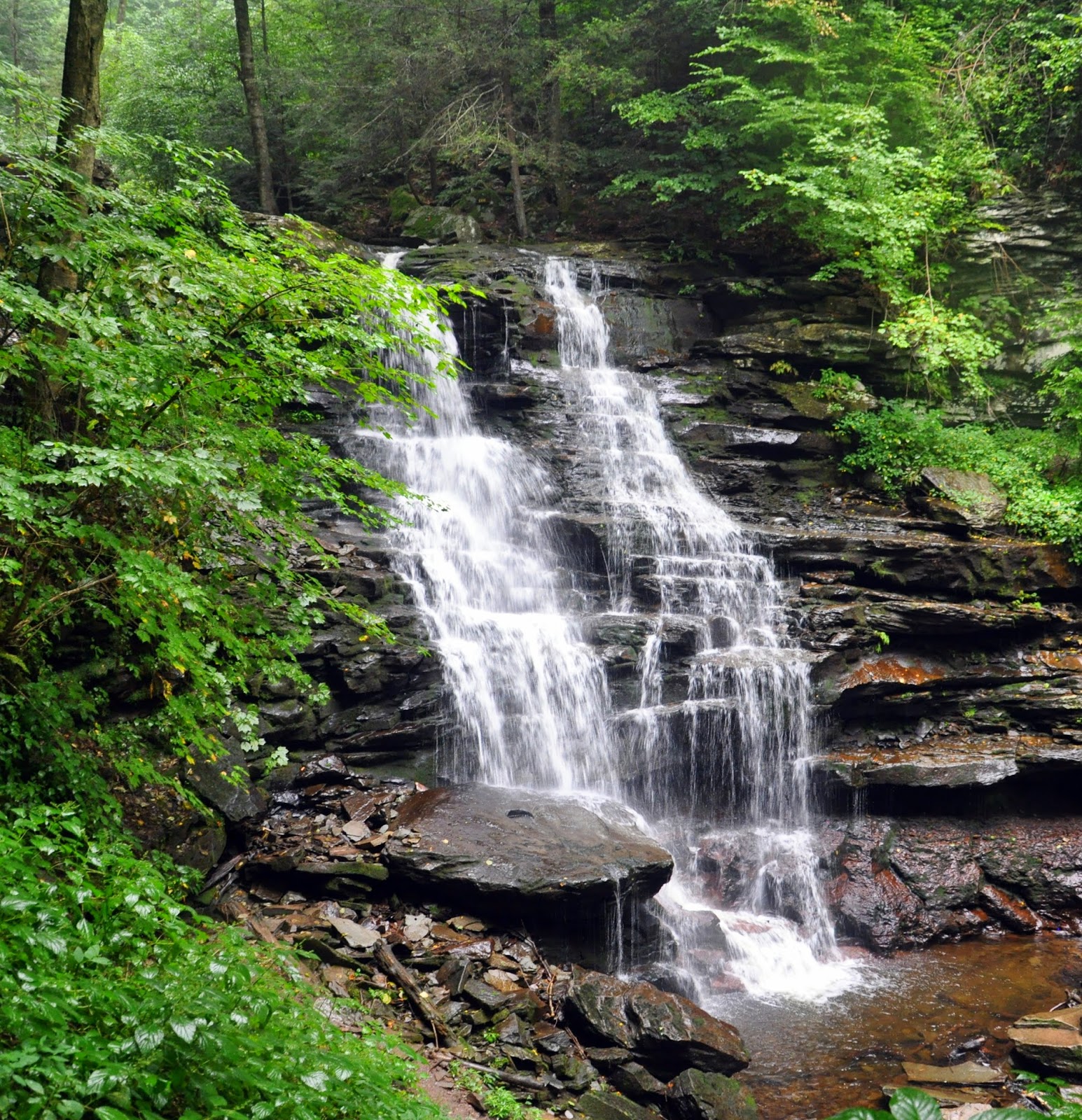 Because Ricketts Glen State Park is a 4 hours away from my home, we decided to make it a long weekend in the Poconos. I'd hoped for a great and glorious last gasp of summer over Labor Day Weekend, but instead the day of the hike dawned humid and threatened to rain. We planned on arriving by 9:30, and as we started ascending the mountain road to Ricketts Glen State Park, we hit a wall of dense fog. Visibility dropped to about 20 feet. I crossed my fingers and continued to hope for no rain. As for fog -- well... I love fog, actually. It makes photography fun, and definitely adds to the mystery of our surroundings. 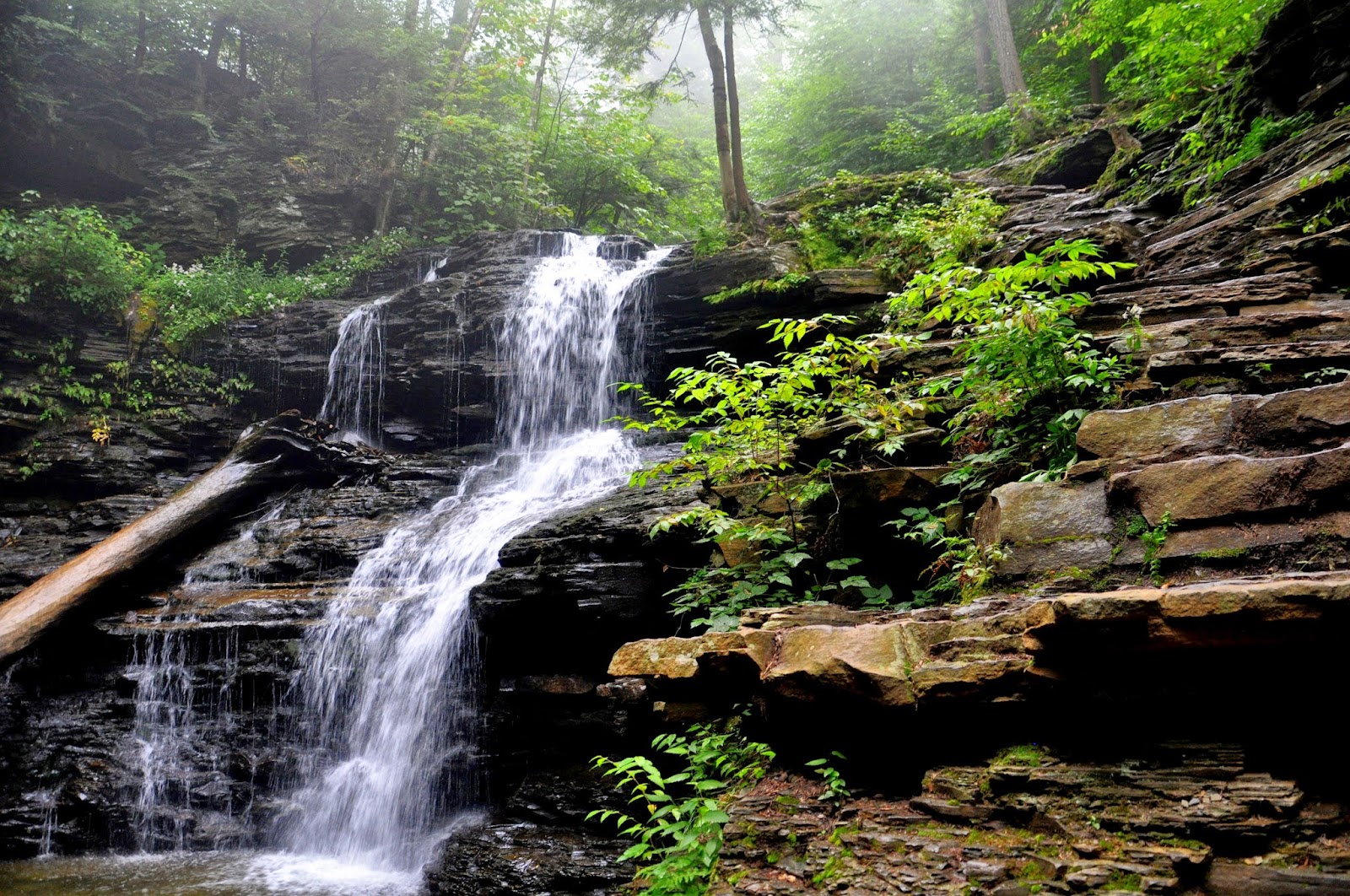 We wisely stopped at the Visitor's Center. A helpful park employee provided us with a trail map and detailed directions to find the parking lot at the trail head -- it's clear that she's given these directions before! 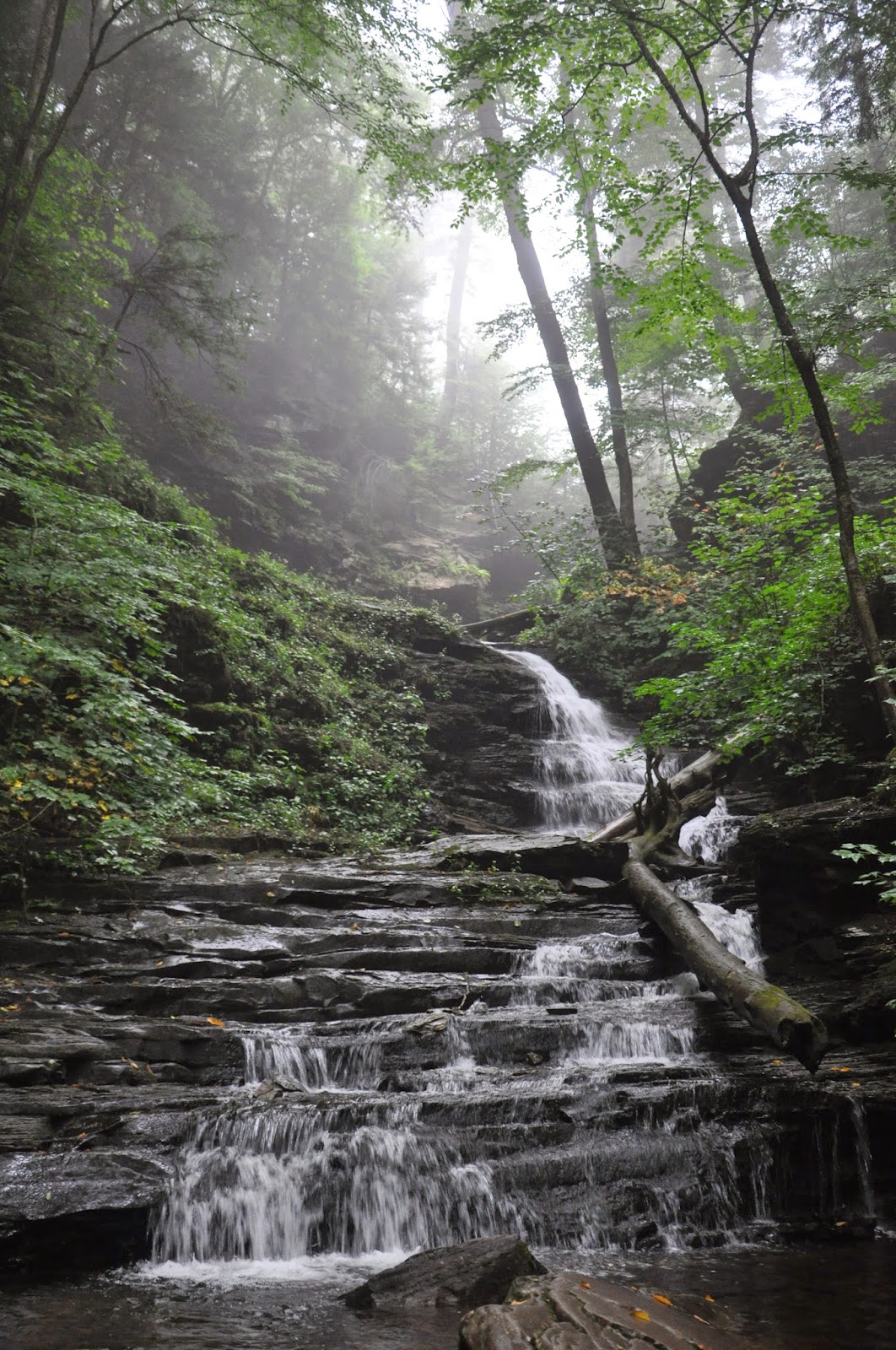 There's a 7-mile hike that leads to all 21 waterfalls, or a much shorter 3.2-mile loop, that leads you past 18. (You could add maybe another mile -- half mile there and back -- and tack on a side trip to see the remaining 3 falls, if 18 isn't enough and avoid that long 7-miler; it's a pretty steep descent and equally challenge ascent, but no worse than the 3.2 mile loop.)

For the shorter, 3.2-mile hike, she recommended we start on the Highland Trail, veering right from the trail head to meet the Glen Leigh trail, which would take us past eight waterfalls and on down to "Waters Meet." At Water's Meet, we pick up the trail leading us back up the side of the mountain through Canoga Glen and past another 10 waterfalls, including the 94-foot spectacular Canoga Waterfalls, and then finally back up to the Highland Trail (which seems blissfully level after the step ascent) and the parking lot. 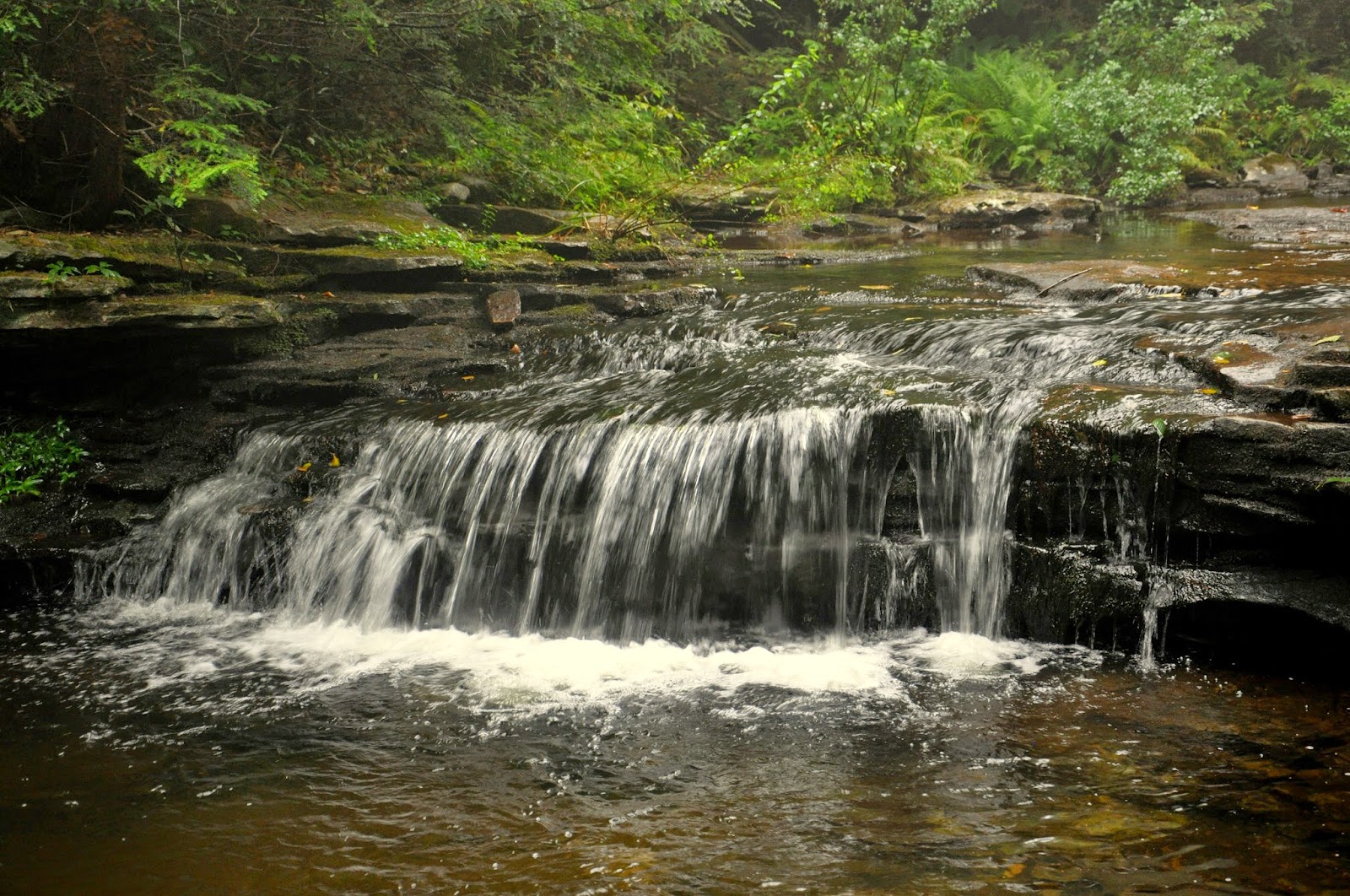 Plan on just taking your time and enjoy the immense beauty of this park! The hike is all about the waterfalls. Even rainy and foggy, it was incredible. Once the trail meets up with Kitchen Creek, it hugs it for the rest of the way -- a no time are you away from sight and sound of waterfalls or the creek itself.

It only took us 3-1/2 hours -- and that included carefully traversing rain-slicked rock steps with three scaredy-cat dogs -- to see all of the falls on the trail, during which time I stopped to take about 250 photos (give or take) and several videos. Go slowly and carefully down the steps -- those are the scariest part, because a slip could land you 30 feet below in some places and it was clear that the trail builders thought railings were for sissies. If you start getting winded on the way up, then take some more photo ops! 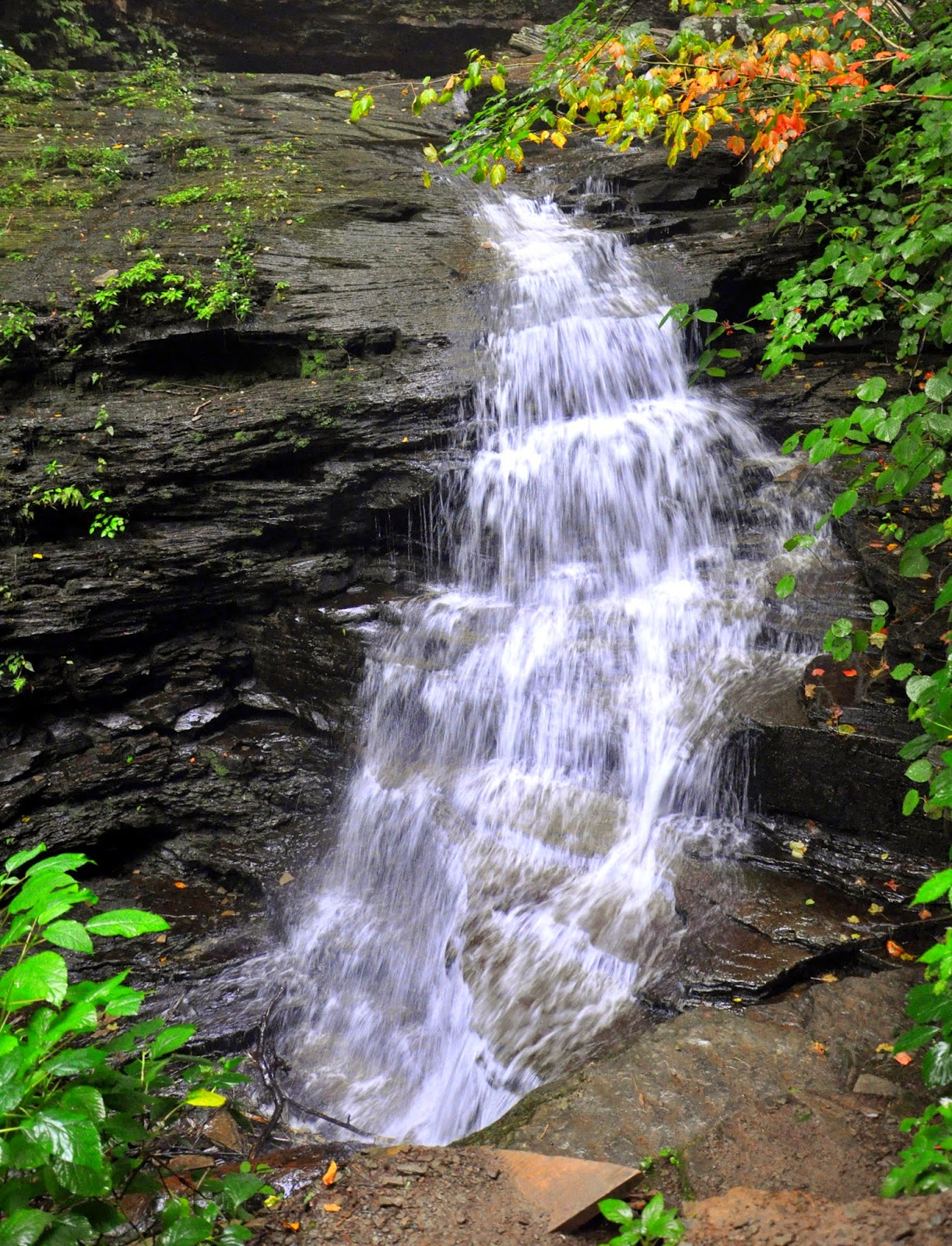 The park's waterfalls were the main attractions for a local hotel from 1873 to 1903 and in fact, the park is named for the hotel's proprietor, R. Bruce Ricketts. A successful business man who took advantage of one the earliest eco-tourism ventures, Ricketts built the trail along the waterfalls, the better to attract tourists to his hotel. By the 1890s, Ricketts controlled over 80,000 acres -- about 120 square miles. He made his fortune clear-cutting almost all of that land, including much of what is now the park. Thankfully, he preserved about 2,000 acres of virgin forest in the creek's three glens. 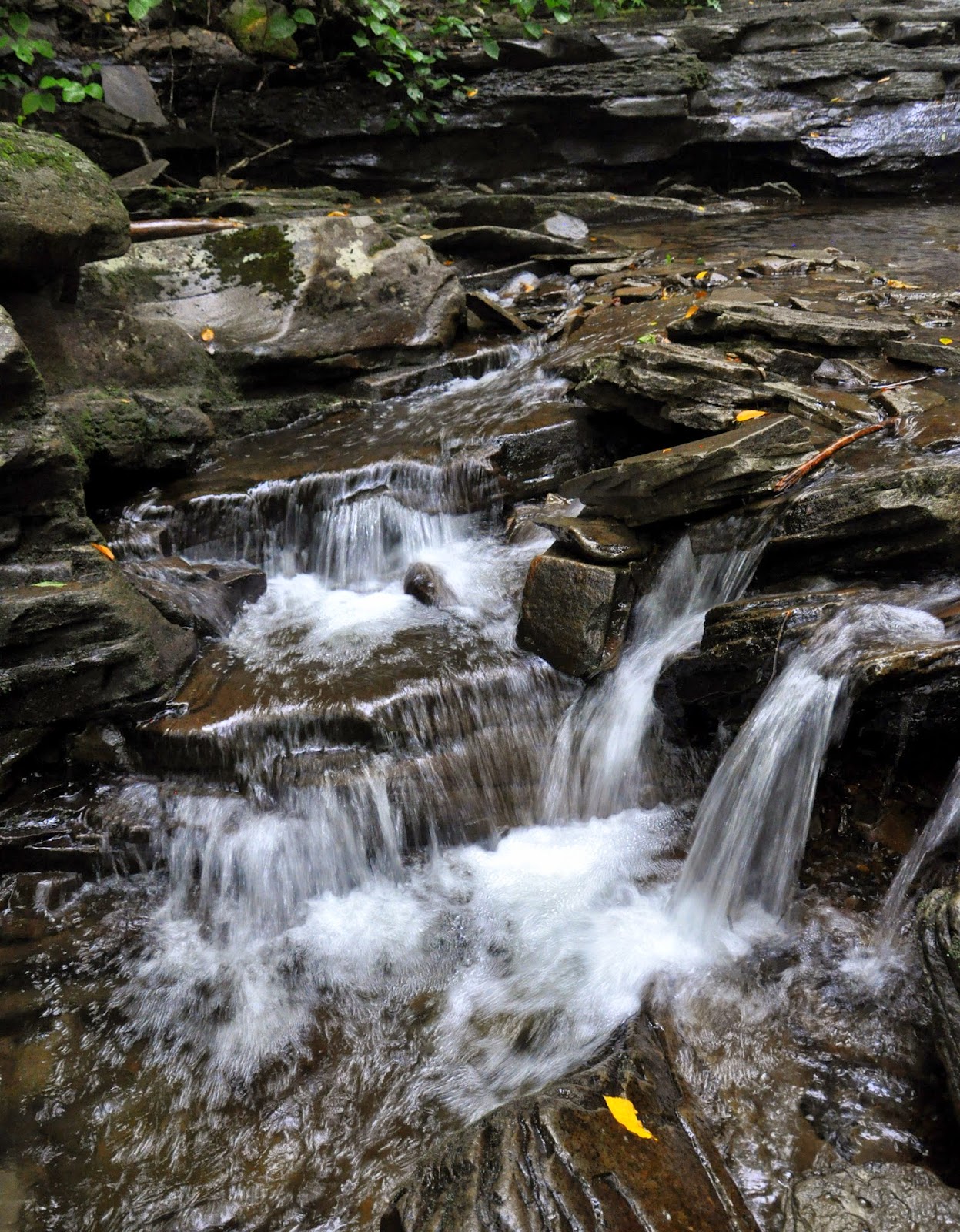 The Glens Natural Area has 8 named waterfalls in Glen Leigh and 10 in Ganoga Glen, these come together at Waters Meet; downstream in Ricketts Glen there are four to six named waterfalls. The park has four rock formations from the Devonian and Carboniferous periods, and is home to a wide variety of plants and animals. Other than salamanders, we didn't notice any wildlife.

Even on a foggy, raining morning, there was no solitude. We saw three different small groups head down the trail while we were still getting our hats on and the dog leashes attached. As it started raining, we passed two sets of couples headed back to the parking lot which we assumed were discouraged by the rain -- which really wasn't all that miserable, since the leaf canopy caught most of the rain, and wisely, for once, we'd worn hats that kept it out of our eyes. 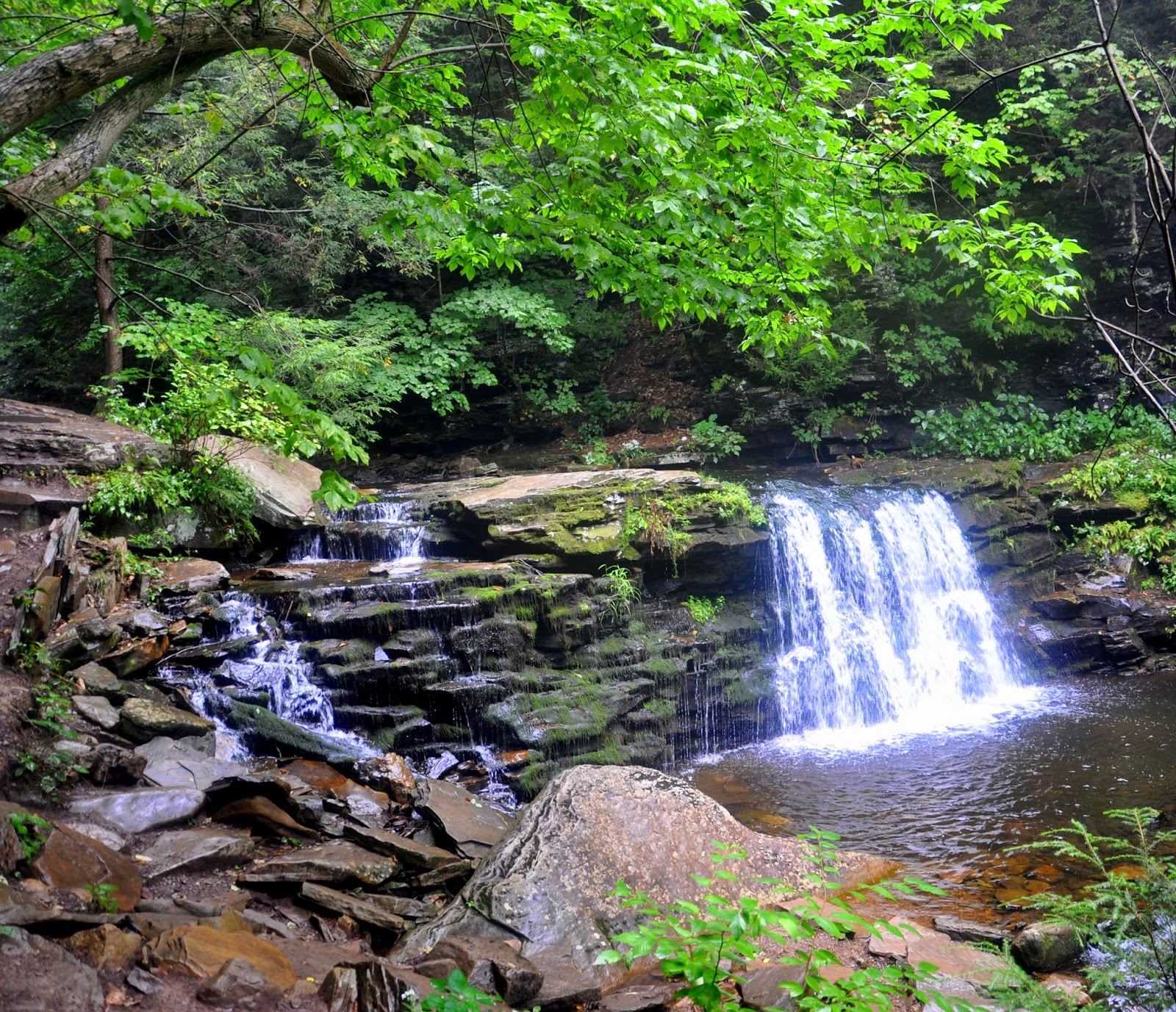 Although most of the Highland Trail we traveled in solitude, it seemed that once we hit the Glen Leigh trail, and the start of the waterfalls, we encountered groups steadily, including two large groups of at least 15 people. It's no surprise that this is the most popular trail in one of the most popular state parks in Pennsylvania! You will share the trail with many others. I can only imagine how crowded it would be on a sunny fair-weather weekend! Even if crowds aren't your thing, find inner resources of patience and gird your loins! It's worth it!!


Tip #1: Go during leaf-peeping season -- the trail would be amazing with a leaf color spectacular!

Tip #2: Rickett's Glen Visitor Center is located off of RT 487. You will find maps, notices of current happenings and events, real bathrooms, a little gift area and some helpful rangers here. Definitely worth a stop before hitting the trail! 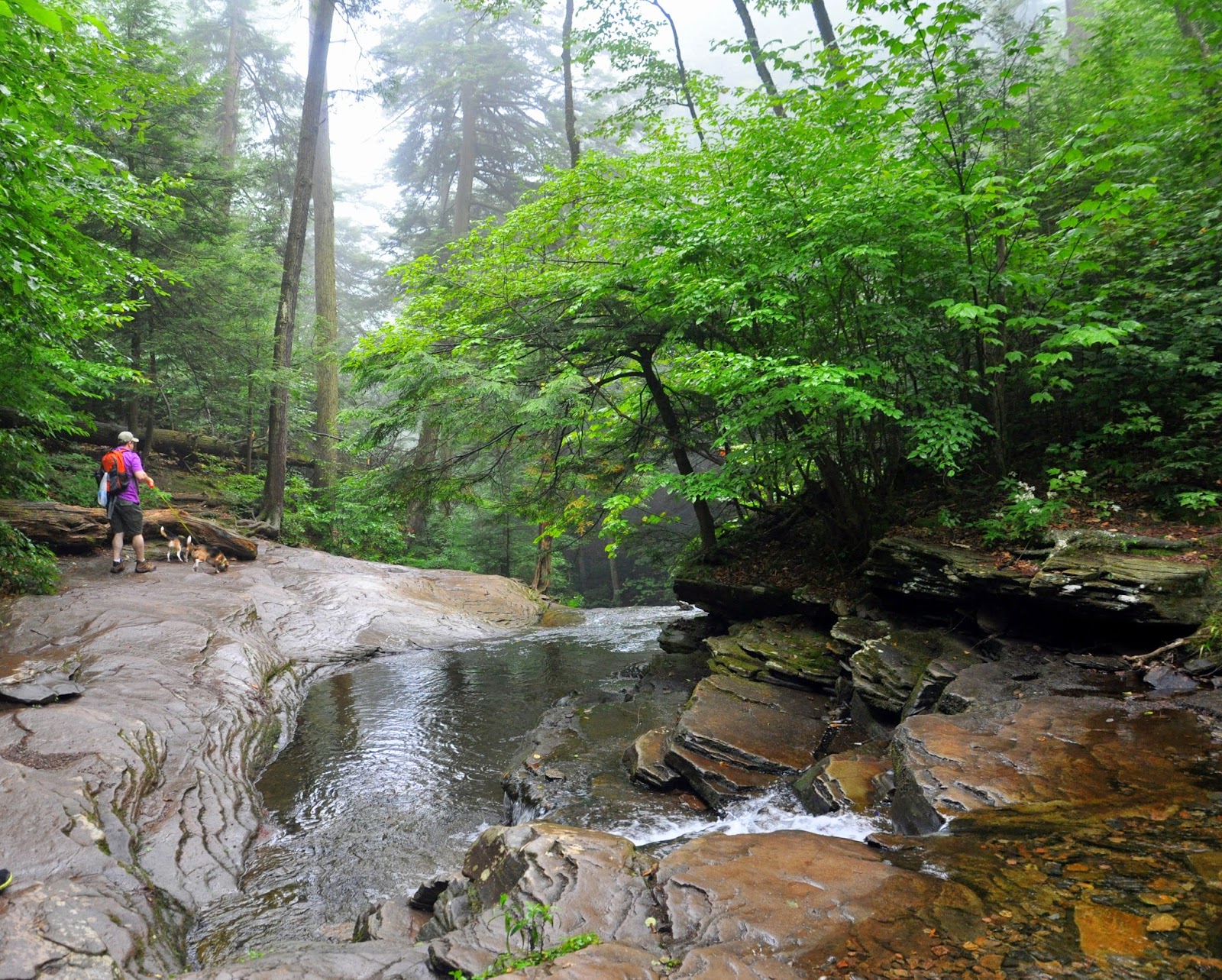 Tip #3: Download a handy, dandy phone app: The Official Guide for Pennsylvania State Parks & Forests, Powered by Pocket Ranger®. It's free, and includes GPS features. You can find more about it at the Pennsylvania State Parks website (dcnr.state.pa.us/stateparks‎). It tells you a little about the parks and gives you hours, directions, and some helpful information. Search for "Pocket Ranger®" in either the App Store or Google Play. 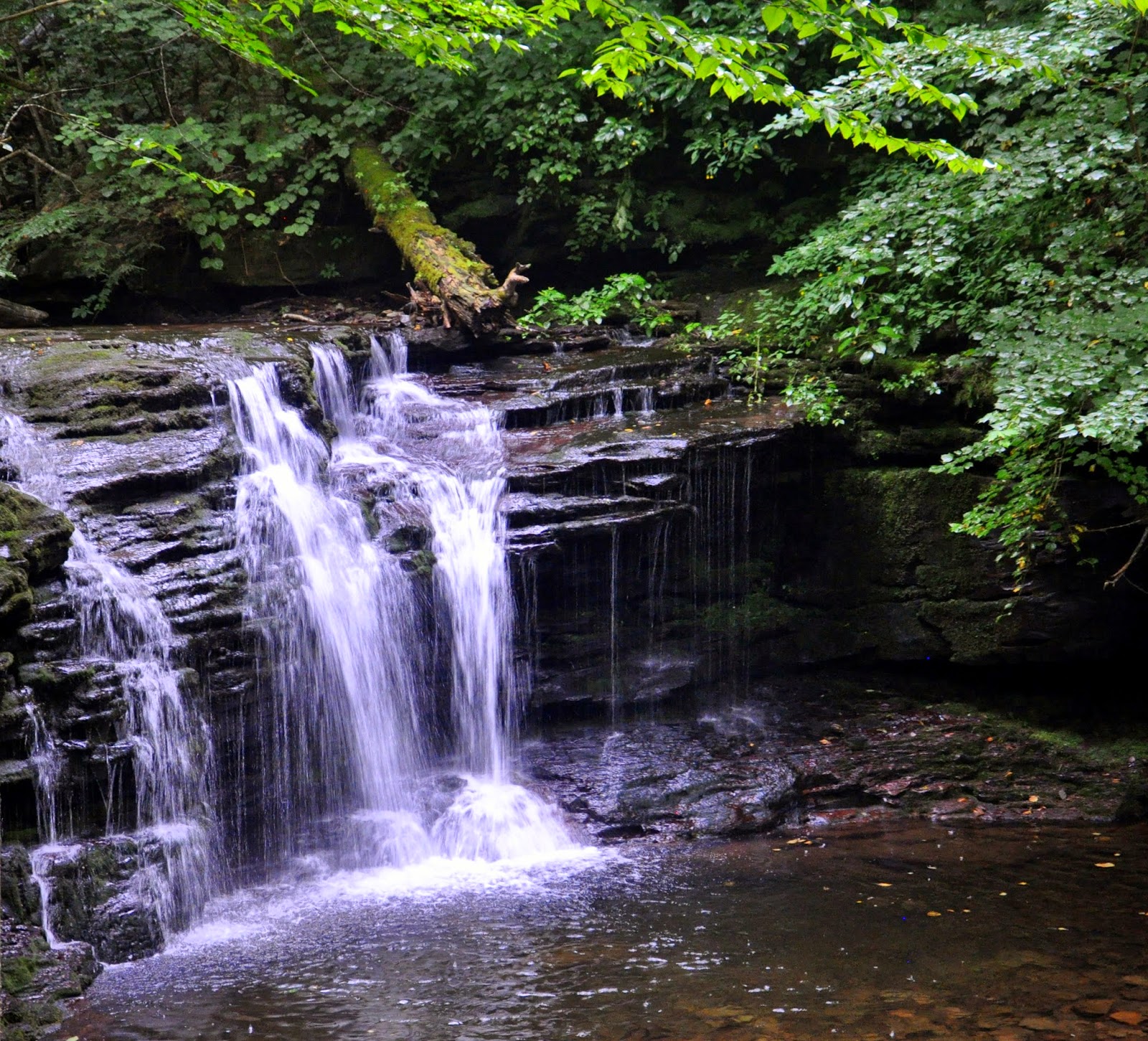 Hours: From dawn until dusk.

Dogs: Yes, if they're sure-footed and good with strangers. If they're old or sensitive or afraid of people, leave them at home for this hike. The rock stairs -- and these dominate two of the three miles of the hike -- can be challenging to some dogs.