The Famous and the Blameless at Laurel Hill Cemetery 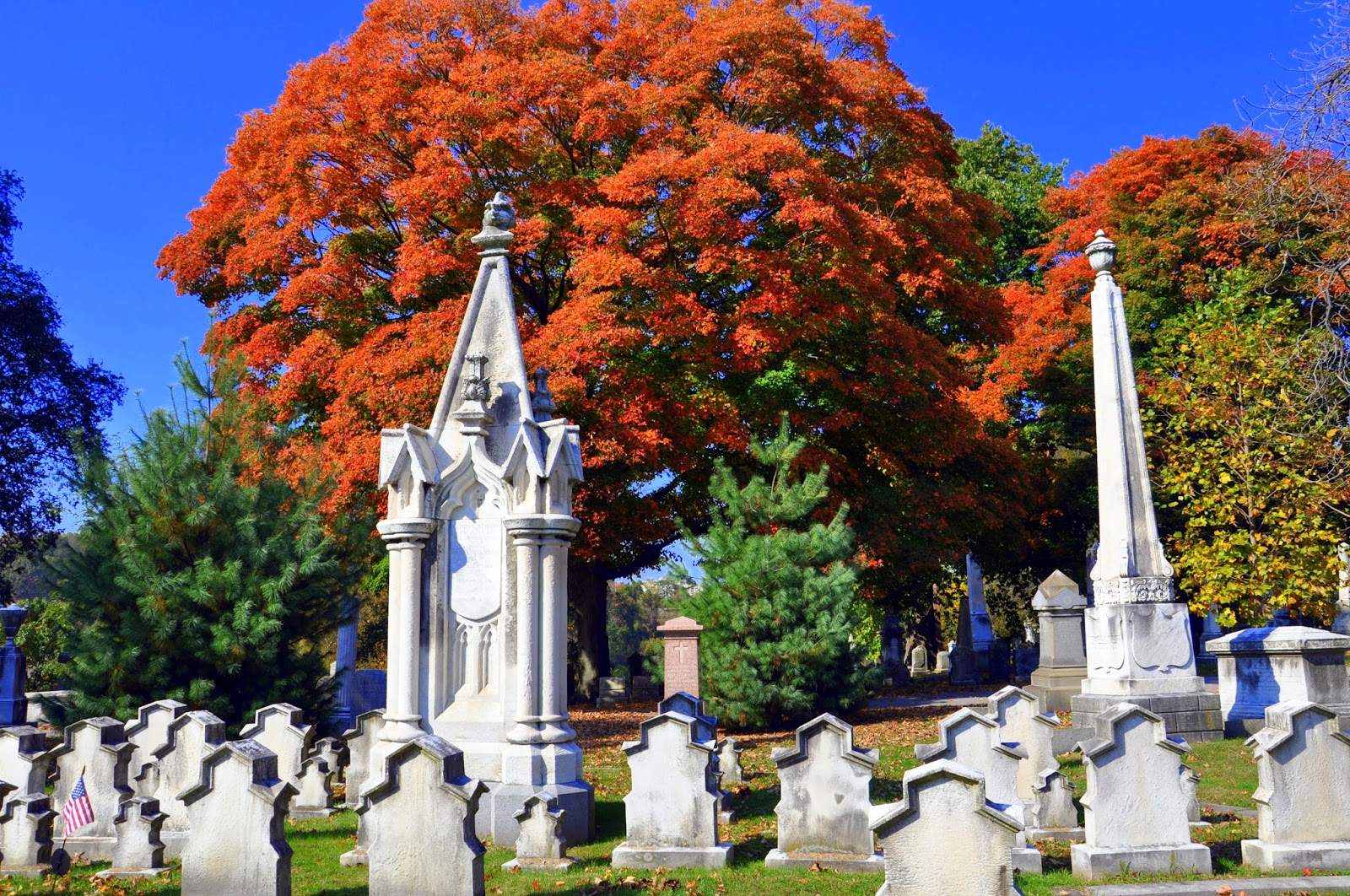 If you are at all interested in exploring a cemetery, then Laurel Hill Cemetery in Philadelphia, is the one you should start out with -- especially if you think it'll be the ONLY one you decide to tour.

Laurel Hill's creators and organizers intended the cemetery to serve as a civic institution designed for public use. The cemetery was founded in 1836 by John Jay Smith, who was distressed at the way his deceased daughter was interred in a Philadelphia churchyard. He and other prominent citizens decided to create a rural garden cemetery five miles north of Philadelphia, a location that was viewed as a haven from urban expansion and a respite from the increasingly industrialized city center. 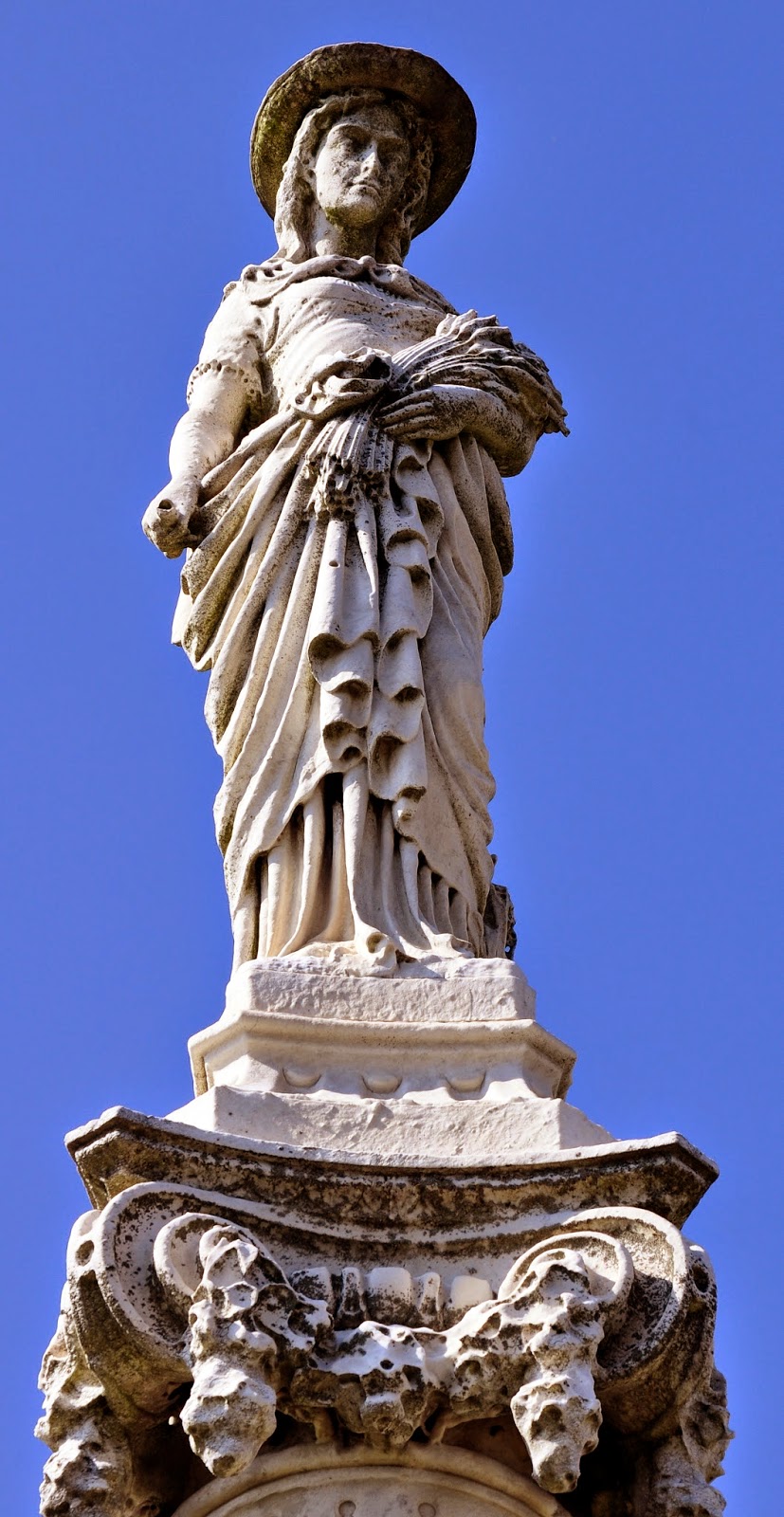 Before public parks and museums became commonplace, rural garden cemeteries, and Laurel Hill in particular, were multi-purpose cultural attractions where people could experience the art and refinement previously known only to the wealthy. Artists furnished lovely statuary for the more well-to-do inhabitants, and paths and roads were laid out with an eye to gradually revealing pleasant views and landscaping arrangements.

Not surprisingly, given its location on the bluff overlooking the Schuylkill River, Laurel Hill became an immensely popular destination in its early years and required tickets for admission! Nowadays people look askance when I mention I'm a tombstone tourist and have just spent an afternoon exploring a cemetery. Writer Andrew Jackson Downing reported “nearly 30,000 persons…entered the gates between April and December, 1848.” Wow!

Today, however, you can find a solitude there that you can't find in most nearby state parks, walking on hiking trails frequented by the gabbling hordes. As my husband and I strolled around Laurel Hill, we encountered several couples, of varying ages, who drifted from tombstone to tombstone -- tombstone tourists like us. There was a group of four women, obviously related, who diligently photographed the more lovely markers. One woman I encountered took a more organized approach, seeming to photograph each one and names and dates in one family plot, I wondered whether she was a genealogist. One elderly woman I spoke with admitted she loves visited cemeteries, like I do, recommended one in New York that we "must see" and said she was at Laurel Hill, on that particular day, with her adult son and his dog. They were celebrating his birthday together doing what they enjoyed doing the most. But that was it -- in an incredibly large urban park. 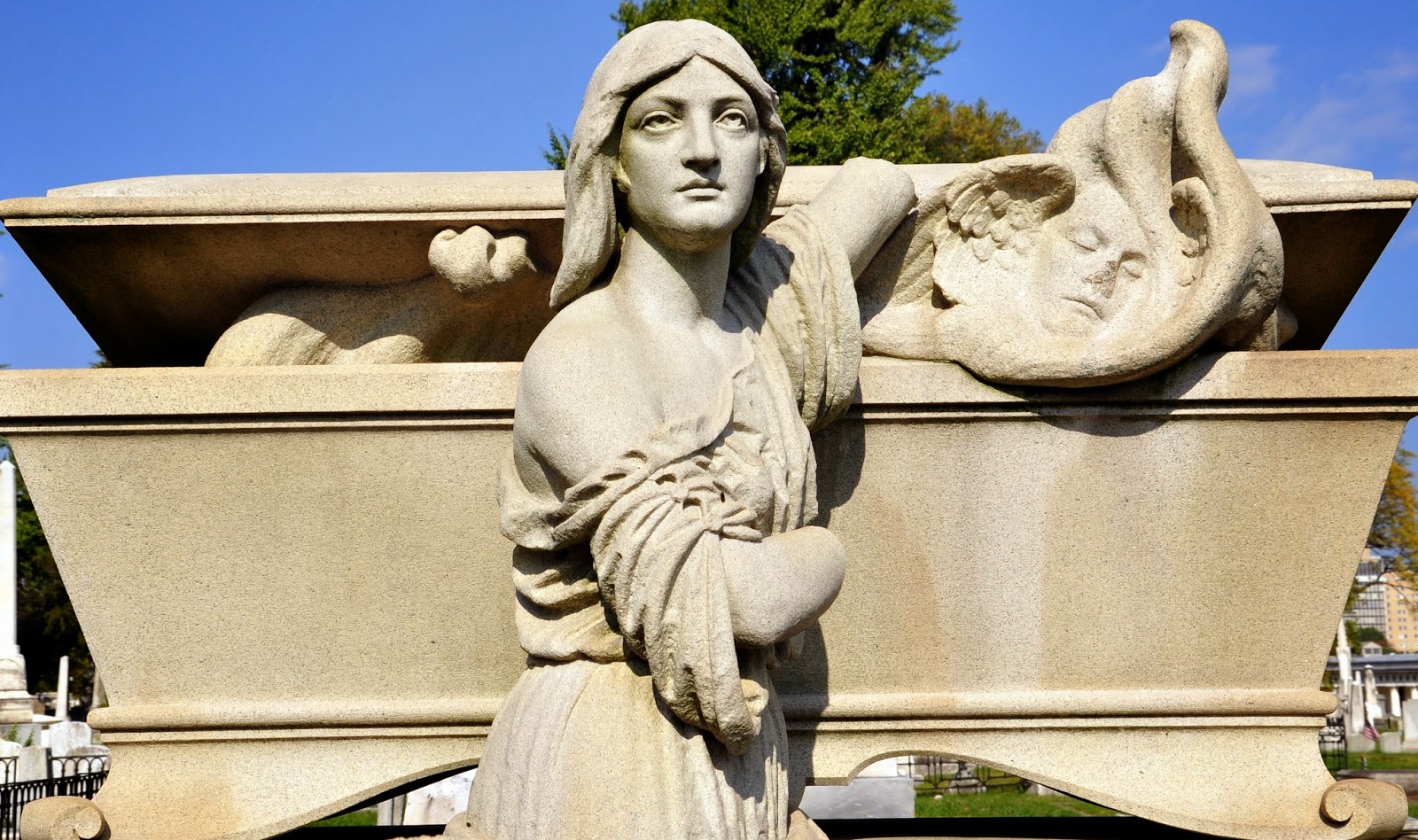 Even if you're totally alone -- and sometimes it seems that way in a hilly cemetery, where trees, monuments, and rolling hills can obscure the view of other living creatures -- cemeteries like Laurel Hill; Hollywood in Richmond; Mount Olivet in Frederick, MD; and Loudon Park in Baltimore are far from creepy. The city street noises echo through, although muffled, and in Laurel Hill, I heard the sounds of a rowing race in the river below. Birds twittered from the trees, and squirrels played hide and seek among the stones. It is not spooky, and so far (knock on wood), I've never encountered the restless dead. What I did encounter were some very unique markers -- artistic expression in marble and granite, that tried to represent the lives just lived, or their hopes for the next life. 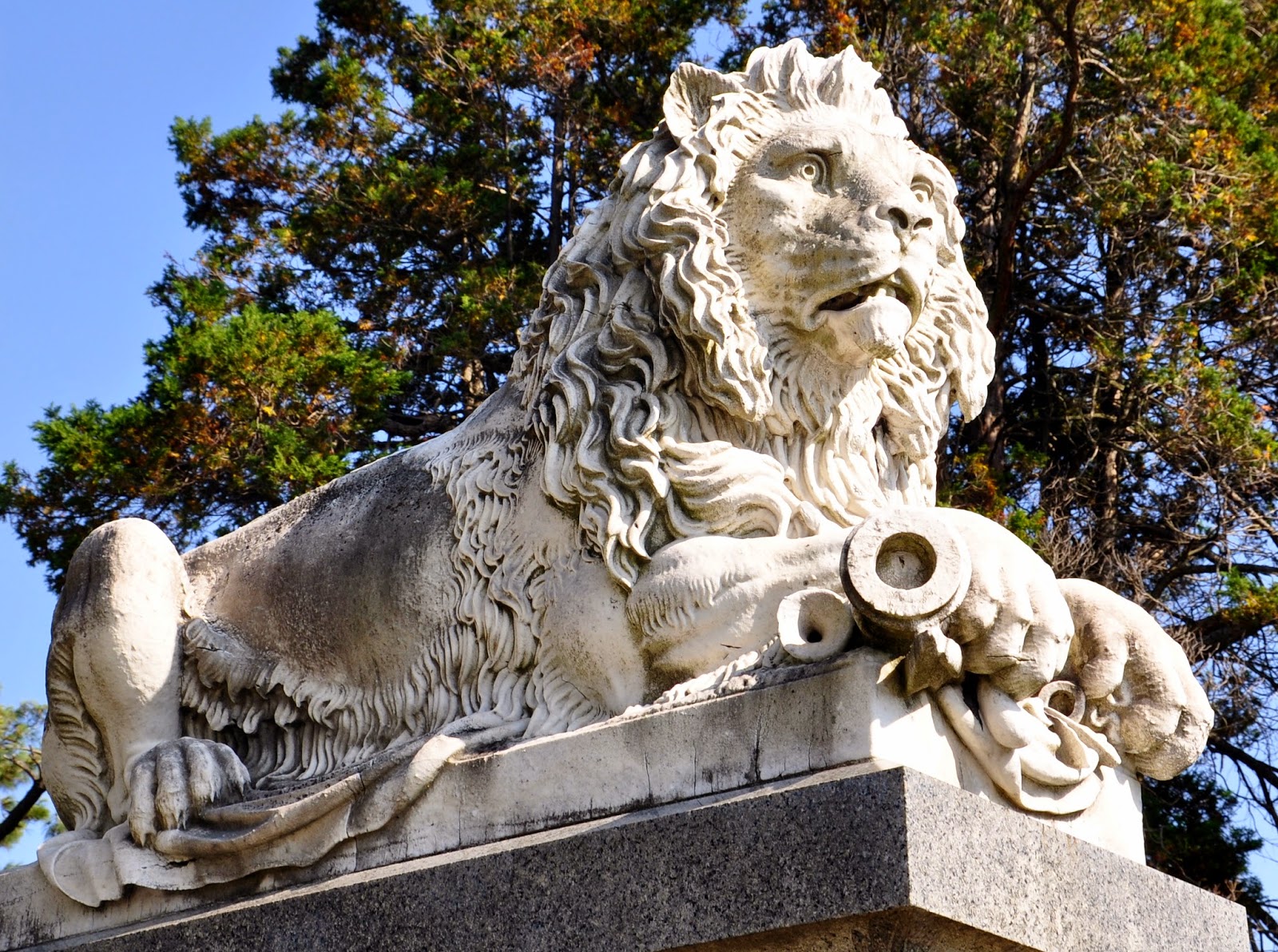 During and after the American Civil War, Laurel Hill became the final resting place of hundreds of military figures, including 42 Civil War-era generals, including Battle of Gettysburg victor General George Gordon Meade. Like the Victorians before us, we picnicked in the cemetery, on a bench near Meade his grave.

Laurel Hill became the favored burial place for many of Philadelphia's most prominent political and business figures, including Matthias W. Baldwin, founder of the Baldwin Locomotive Works; Henry Disston, owner of the largest saw factory in the world (the Disston Saw Works); and financier Peter A. B. Widener. Civil War generals and military heros can be found there, as well as Revolutionary War figures, whose remains were moved there by the cemetery's organizers, who wished to make Laurel Hill the place to be, or rather, The Place to be buried.

There are several notable monuments memorializing more modern people. For example, there's the very interesting giant mike and bright blue stadium chairs marker for Harry Kalas. For those of you who are not Phillies fans, Kalas was an American sportscaster, best known for his Ford C. Frick Award-winning role as lead play-by-play announcer for Major League Baseball's Philadelphia Phillies, a position he held from 1971 until his death in 2009. We also saw the breathtaking sculpture Aspiration by Harriet Whitney Frishmuth, the Berwind tomb monument -- possibly my favorite of all the monuments that I've seen.

Of all the cemeteries I've visited so far, Laurel Hill is by far the most organized for fund raising.
It holds the Gravediggers Ball annually. Every fourth Friday there are walking tours. The cemetery even sells logo'd apparel. And there are several books written about it, including the $5 guide to the cemetery which you can purchase from the cemetery office. Visitors to Laurel Hill can now bring their cell phones and tune into an audio tour that highlights the oldest section of the Cemetery. An introductory exhibit, kiosk with maps, directions for dialing in, and the first stop are all located at the main entrance.

Interestingly, it also offers, on its web site, a brochure to make the cemetery interesting to kids, called the "I Spy Tombstone Hunt." This brochure, downloadable from the website, introduces kids to types of tombstone, what the different symbology is, how to recognize the grave of a Civil War Union soldier, and the different materials used in tombstones, including the fabulous "white bronze."

Getting there: Laurel Hill Cemetery’s main entrance is located at 3822 Ridge Avenue, Philadelphia, PA 19132. Visitors can also access the site via a secondary entrance, located immediately off of Kelly Drive on Hunting Park Avenue.


Hours: Laurel Hill Cemetery’s gates and office are open Monday – Friday 8 a.m. - 4:30 pm;
Saturday – Sunday 9:30 a.m. - 4:30 p.m. Except in the case of special events, all vehicles and foot traffic must exit the cemetery grounds by 4:30 p.m. daily. Although the lady in the office said it's only closed on Christmas and New Year's Day, but sometimes opened up on Christmas, the website indicates the the cemetery is closed on major holidays, including New Year’s Day, Dr. Martin Luther King Day, Fourth of July, Labor Day, Thanksgiving, and Christmas; admission is free except for tours. 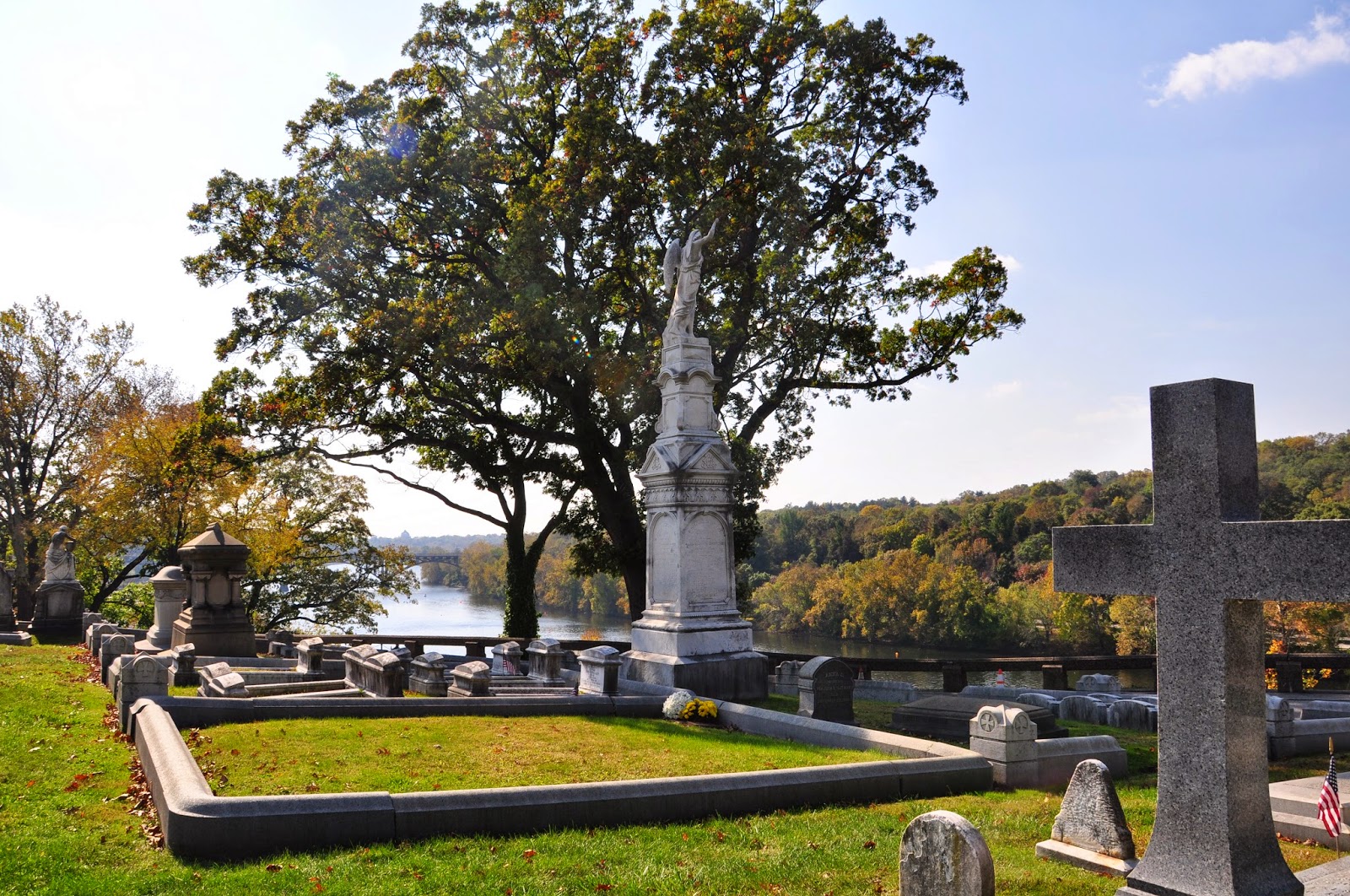